For this Thanksgiving, I'm venturing into the world of pie making.  I'm talking real pie, with homemade pie crust.  Yes, I make this lighter chocolate pudding pie on occasion and I've ventured into the world of tarts.  I even made a sweet potato pie a couple of years ago but those pies use a graham cracker crust, which, to me, doesn't quite seem like an authentic pie. 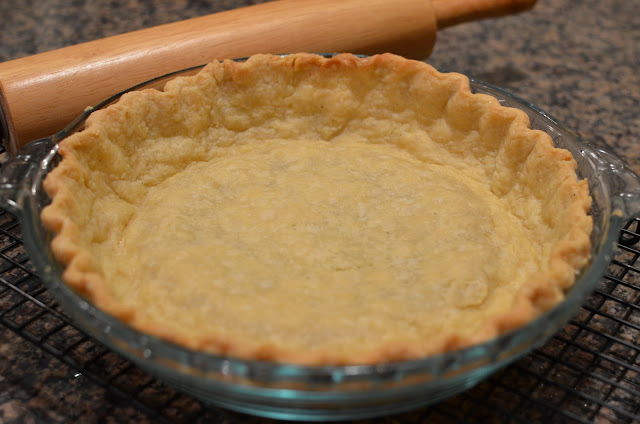 I guess the reason I haven't made pie before is, well, I don't like them much.  I like a flaky pie crust but I'm not a big fan of fruit desserts (or maybe I just haven't tried enough of them); you know I'm all about the chocolate.  But I'm expanding my horizons while staying true to what I love.  So this Thanksgiving, I'm giving pie a try.  I'm going to make pumpkin pie and chocolate pudding pie.  I hope they turn out and I'm curious as to which will be more popular at the Thanksgiving table.  But before all that happens, I'm starting with the pie dough - an all butter one. 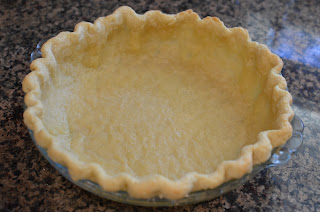 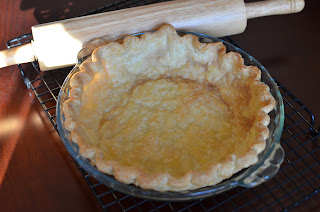 I learned that making a pie crust is harder than it looks and definitely takes practice!  But done right, the recipe is quite simple (particularly when you use a food processor, in my case) and the dough takes less a few minutes to make.

I've got to tell you that this was actually my second batch of pie dough and the one I made using the food processor.  The first time, I got a little too ambitious and thought I could make the dough by hand.  After reading so much about the importance of not over-incorporating the butter so that the crust bakes up nice and flaky, I completely under-mixed and ended up with large lumps of butter in my dough.   I knew it wasn't right and started reading disaster stories of butter popping out of the crust in the oven when baking because the butter wasn't incorporated enough.  The next morning, I threw that batch out and started anew in the food processor.  I'm so glad I did!  The result of the second batch felt and looked so different from the first.  This one is well mixed but I can still see small specks of butter throughout, which is how it should be.

After my first failed attempt at making the pie dough by hand, I used a food processor and it was much easier for a novice like me.

Start by pulsing 2 1/2 cups of flour together with a tablespoon of sugar and 1/2 teaspoon of salt.  Then add 2 sticks of very cold, cubed butter. 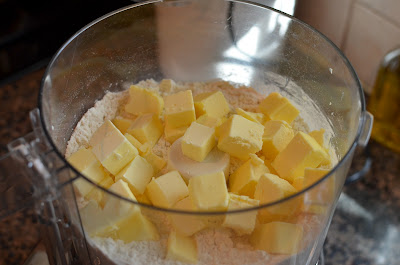 Pulse until the butter is broken into about 1/4 inch pieces.  Don't overmix since we have to pulse it a few more times with water and the finished dough should still have mini bits of butter throughout.  Those little bits of butter allow the dough to puff up when baking and make for a flaky crust. 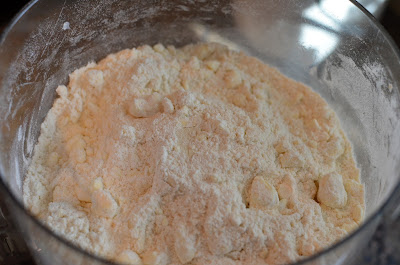 I added about 8 tablespoons of ice water to the dough (it varies from about 6-8 tablespoons). 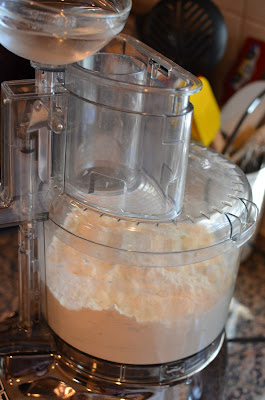 The pie dough is done when it starts to hold together. 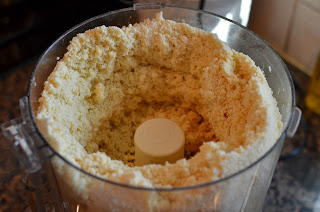 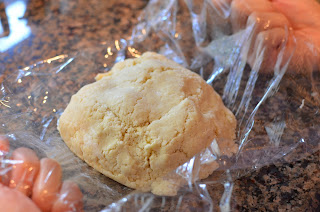 Divide the dough into two and form each into a round disk (make yours rounder than mine for easier rolling later).  I was happy to see little bits of butter in the finished dough.  Chill this in the refrigerator for at least an hour before rolling. 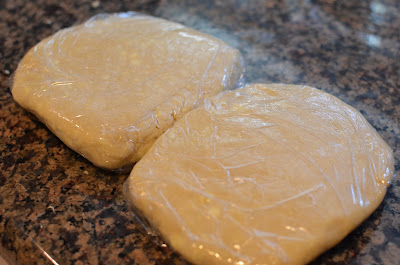 Remember my mishap with that first batch?  I totally under-mixed the dough and the lumps of butter were way too big.  Check out the difference below!  That first batch in the back is not pretty and went into the trash can. 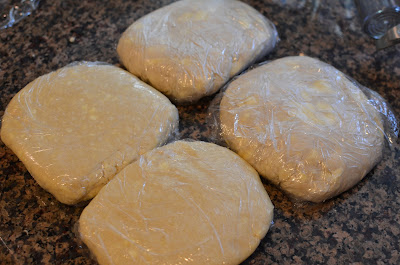 I'm no expert when it comes to rolling out dough but here goes.  For a 9 or 10 inch pie, roll the dough out to about 14 inches ﻿before setting on top of your pie plate.  I find it works well to roll in one direction, lifting the dough up, and rotating as you go.  Flour the surface and the dough lightly as necessary.  You can use a pastry brush to dust off excess flour. 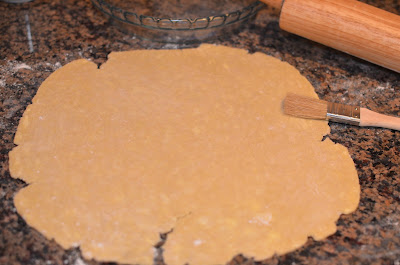 Press the dough gently into your pie pan and trim a 1/2 to 3/4 inch overhang of dough around the rim. 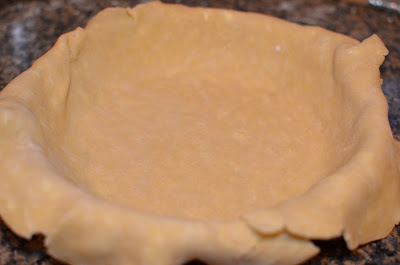 Tuck this under itself to create a thick edge. 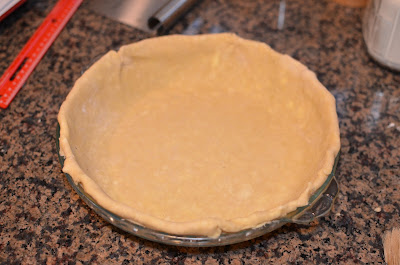 Use your fingers to crimp the edge to decorate. 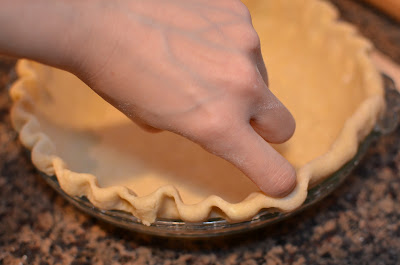 I think it's a good idea to lightly prick the bottom and sides of the dough with a fork.  It's extra insurance against the dough puffing up even though we'll be blindbaking it with some beans later.  Freeze the dough for 30 minutes and bake in a preheated 375 degree oven.  Cover the pastry with a piece of parchment and layer dry beans of pie weights over the top. 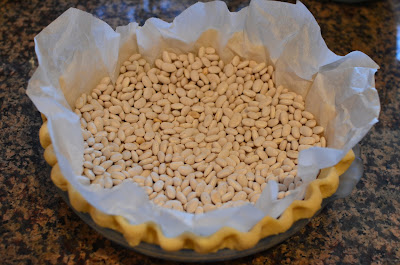 Bake like this for about 20 minutes and then remove the beans and bake for another 10 to 15 minutes until golden brown.  Let cool and it's ready for whatever filling you have planned. 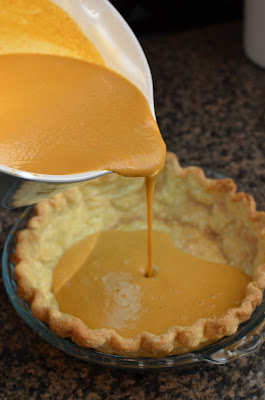 Making the dough
Place flour, sugar, and salt in the bowl of a food processor (you can do this in a stand mixer with the paddle attachment, or if you are feeling adventurous, you can also do it by hand in a large bowl with a pastry blender).  Pulse the dry ingredients together and add the chilled butter cubes.  Pulse until butter is broken up into about 1/4 inch pieces.

Add 6 tablespoons of the ice water (all at once), making sure there's no actual ice in the water.  Mix until the dough just begins to come together.  Use the remaining 2 tablespoons of ice water, as needed.

Turn the dough out onto a work surface and divide it into 2.  Form each into round disks.  Cover with plastic wrap and refrigerate for at least an hour.  It can be refrigerated for about 2 days or frozen for 2 months.

Rolling out and prebaking the pie crust
Roll the disk of dough on a lightly floured surface.  I find it works well to roll the dough in one direction a few times, then lifting and rotating it as you go.  For a 9 or 10 inch pie pan, roll it into a 14-inch round.

Life the dough with your rolling pin and place it on to your pie pan.  Gently press the dough into the pan and trim the edges to about a 1/2 to 3/4 inch overhang over the rim.  Tuck the overhang onto itself.  Use your fingers or a fork to crimp the edges to decorate.  Prick the bottom and sides of the dough lightly and freeze for 30 minutes.

Line the pie shell with a piece of crumpled parchment paper and fill with dry beans or pie weights.  Bake for about 20 minutes before removing the paper and beans.  Bake for another 10 to 15 minutes until golden brown.