As I sit here writing this, I am seriously stuffed from our Thanksgiving meal.  I'm not complaining; I feel very lucky to have so much but I do wish I had indulged just a little less.  After the turkey and a long list of side dishes, we scrounged up a bit more room for this chocolate pudding pie. 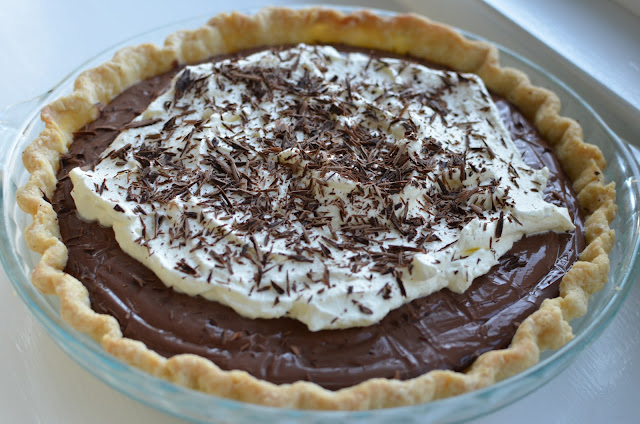 I considered this our alternative to the traditional pumpkin pie I also made for the first time this year.  As I suspected, the chocolate dessert edged out the pumpkin in popularity at the dinner table (particularly with the kids), although my husband was a big fan of the pumpkin.  There's something about pie that belongs with Thanksgiving.  Any other day, I'd likely go with a lighter alternative and just make chocolate pudding (i.e., without the pie crust).  This is a cornstarch and milk based pudding, rather than the richer egg based variety.  It's slightly richer than Ellie Krieger's lighter chocolate pudding since we use whole rather than 1% milk but it's still relatively light, not overly sweet, and just generally yummy.
Being responsible for the turkey and gravy, I was happy that this pie can be prepared the night before and stored in the refrigerator.  The whipped cream topping is optional - not really necessary but festive for the special occasion.  Ideally, the whipped cream should be added near the time of serving.
For the pie crust, I used one of the two I made using this recipe.


The filling is easy to prepared and simply cooked on the stove top.  Start with whisking 1/4 cup of cornstarch, 1/3 cup of unsweetened cocoa powder, and 1/4 teaspoon salt together in a sauce pan. 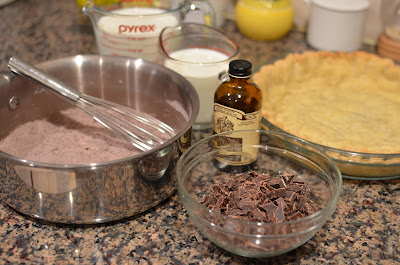 Slowly whisk in 3 cups of whole milk into the dry mixture.  Cook this over medium heat, whisking constantly, until it comes to a boil.  The pudding will thicken at this point, which takes 8 to 10 minutes to reach.  Continue cooking, again still whisking constantly, for 2 more minutes. 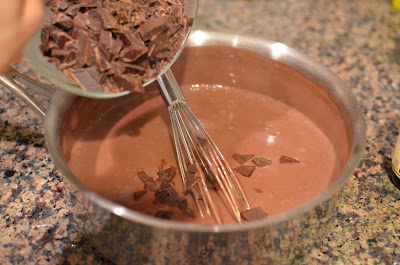 Remove the pan from the heat and add 4 ounces of chopped bittersweet chocolate and 1 teaspoon of vanilla extract.  Whisk until combined.  Simple as that and it's done and ready to be poured into a cooled prebaked pie crust. 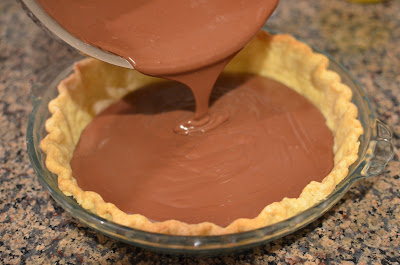 Cover the top of the pudding with plastic wrap directly touching the pudding to prevent a skin from forming.  Chill the pie in the refrigerator for several hours (at least two) until set and ready to slice.  Whipped cream is optional but if you choose to do it, whisk 1 cup of heavy cream together with 2 tablespoons of sugar until it reaches soft peaks.  Shave some bittersweet chocolate on top as garnish. 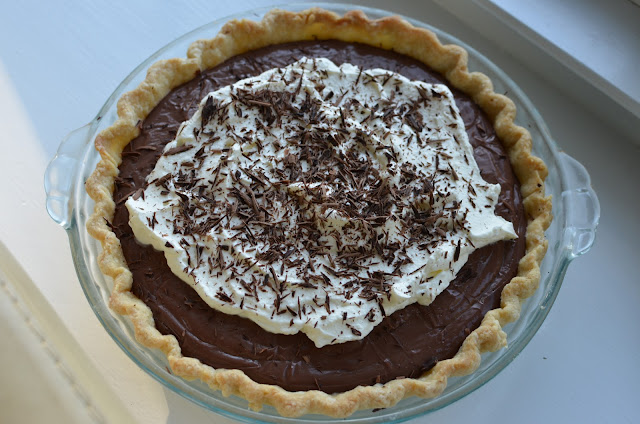 Recipe:
The recipe for this chocolate pudding pie comes from Smitten Kitchen.
I used one of these pie crusts.
Posted by Monica at 9:13 PM