Remember that delicious disaster of mine?  I chronicled our macaron infatuation a few weeks ago and if you recall, my first attempt at making chocolate macarons was far short of perfect...but still ever so tasty.  I wasn't about to go down without a fight - or at least try a few times to see if I could figure it out.  I had to try again and this time, I wanted to gather all the right equipment to see if I'd have better luck.

So this is the making of Chocolate Macarons: Take 2. 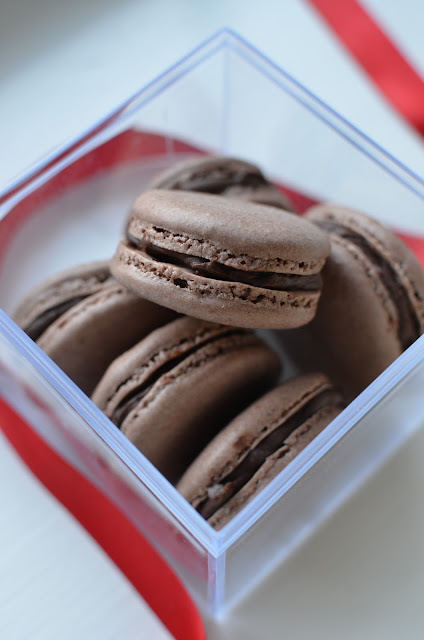 First, the good news:  this batch came out a lot better!  I have a few authentic macarons! 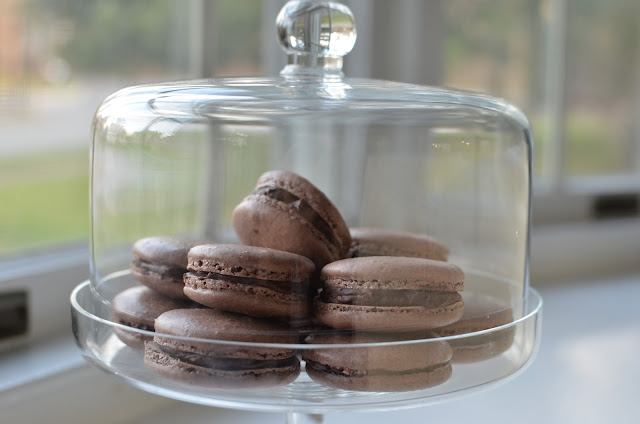 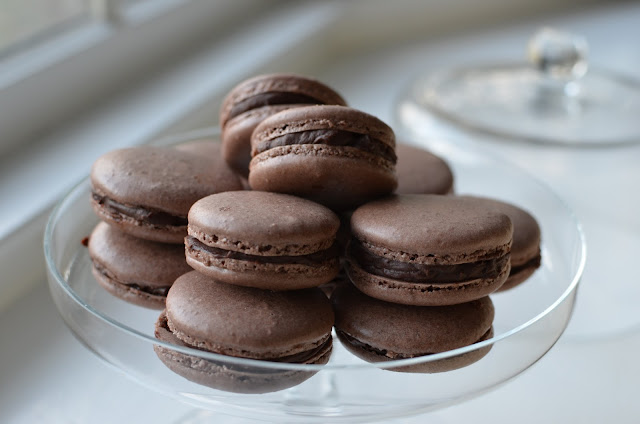 But the bad news: I still encountered some of the same problems I did last time.  The macarons didn't crack this time but out of 2 sheet pans, the first once again had barely any "feet" (that foamy looking bottom that's a signature of a macaron).  And I still had a hard time removing most of the macarons from the baking sheets. 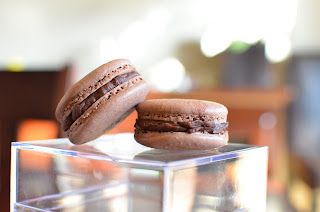 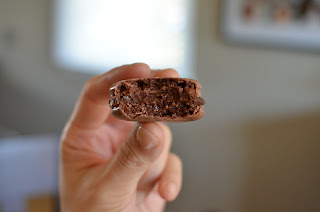 Nevertheless, this attempt was far better than the first and certainly motivation for me to keep trying.  Instead of ending up with just one quasi-macaron looking confection, I had several serious macarons at the end of this experiment.  I was more careful to salvage what I could this time (instead of eating most of the imperfect macaron shells right off the baking sheet like last time) so I had a good 17 finished cookies to savor with my family. 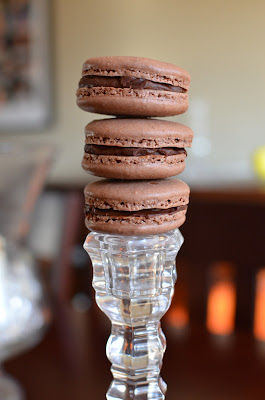 Our resident six-year old macaron-lover was again very happy!  I'll never get tired of hearing him say, "they're really good, mommy!"  And considering said child is usually busy running around trying to light-saber something in my vicinity, I'll greedily take the accolades and hope he remembers this the next time we're arguing about him finishing those green beans at dinner. 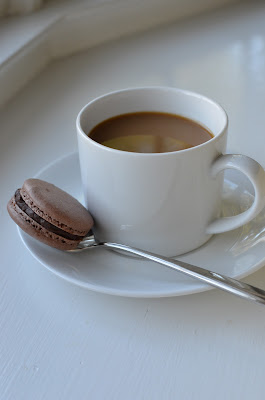 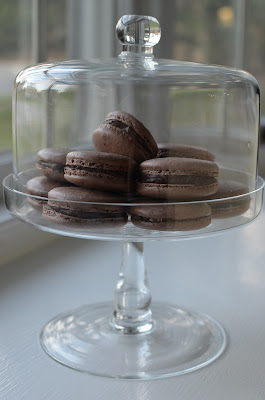 I won't go through the step-by-step details since you can read them here but I do want to highlight some of the things I did differently this time.

There are many macaron recipes out there but I wanted to follow the same recipe I did last time but with the right equipment to see if that made a difference.  That meant I tracked down the recommended size pastry tip and a medium-coarse sieve this time.  I'm using a larger disposable piping bag to accommodate the big tip also. 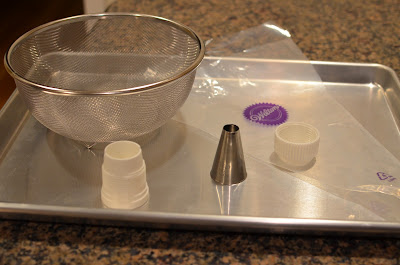 I think these things helped.  Check out the difference in the size of the piping tip I used last time (the small) and the one that's recommended.  I think the larger opening works the batter a little less, which is a good thing.  (You don't even need the large white coupler; just insert the tip into the bag.) 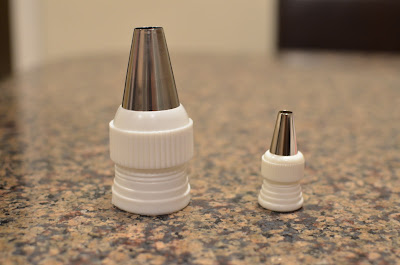 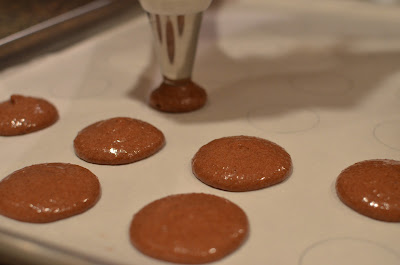 And the medium-fine sieve worked like a dream.  Last time, I gave up halfway because there was just no way to get the mix through the fine sieves that I used.  After sifting, I found a ton of large pieces of almonds that I put them back in the food processor to grind more finely.  I didn't do that last time. 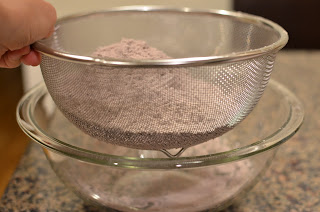 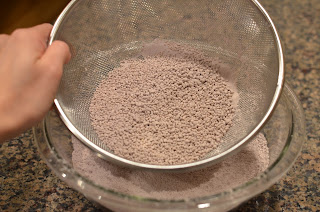 The batter piped out and settled very nicely.  I found the batter a little  thicker this time around and I also had fewer in quantity (closer to how it should be, I think).   As I mentioned, the first sheet came out of the oven similar to my first attempt a few weeks ago - dry and crisp on top but no feet!  Sigh... The second sheet was much more promising.  There was definitely a few actual macaron shells, with "feet", there.  I'm  thinking maybe a warmer oven to start them off, baking them for a bit longer, and spacing them apart a bit more could help next time.  I feel like I learn a little something each time I try this. 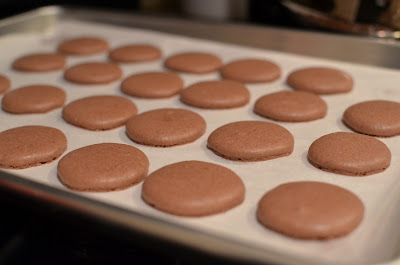 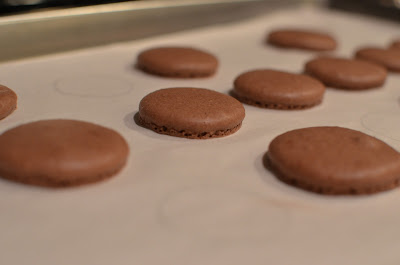 I was disappointed that I still had trouble removing them from the baking sheets.  This tells me they're not baked properly somehow (or maybe I need to use silpat instead of parchment paper to line the baking sheets?). 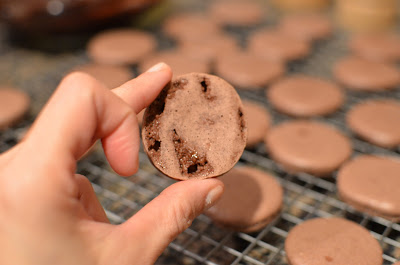 But I was more careful about removing them than I was last time since I wanted to salvage as many as I could.  I already know that the imperfect ones taste great.  The little one is in bed by this point and I was looking forward to presenting the finished product to him tomorrow. 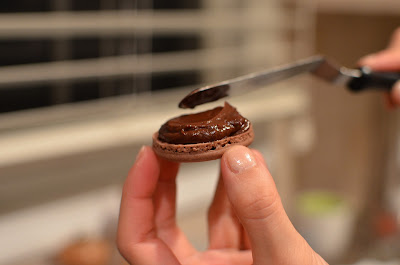 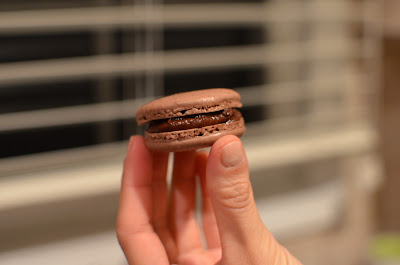 I definitely plan to make macarons again though I'll probably not bore you with every endeavor.  I'll be back should I crack the code once and for all...and when I venture into another flavor.  I still have that big request for a coffee version from my family. 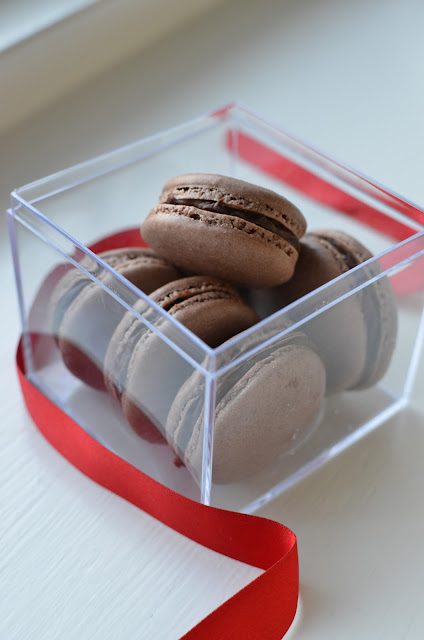