When the world seems crazy and uncertain, don't you wish you could just shut everything out and hunker down with your family at home, cooking and eating all day?  I do.  And every once in a while, I feel this urge to fry something!  The last time I indulged in this craving to fry, I happily made churros.  This time, we enjoyed some sensational beignets for breakfast courtesy of a recipe from French Country Cooking. 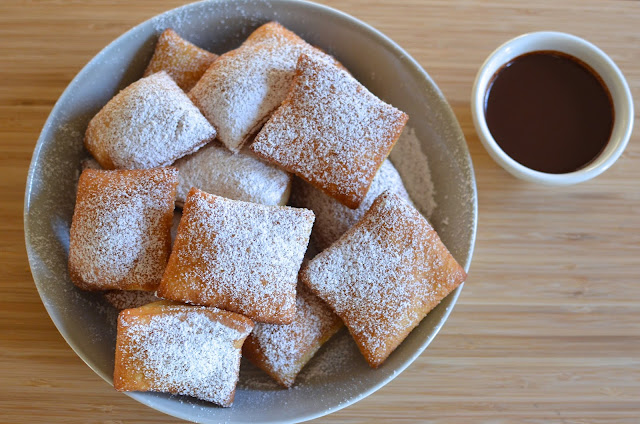 When I think beignets, I naturally think of New Orleans and Cafe du Monde.  While I've had beignets once or twice before, I've never been to New Orleans so I haven't had the pleasure of trying Cafe du Monde's legendary beignets that come loaded with powdered sugar.  Making some at home and enjoying them freshly made and still warm has got to be the next best thing. 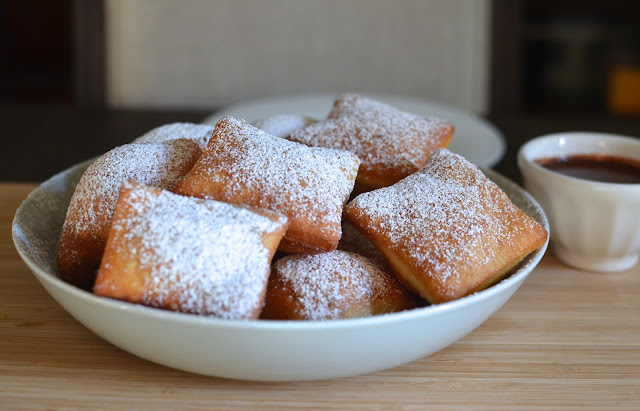 I don't know if it's just me but the thought and act of eating beignets feels like such a treat.  Is it the foreign name that sounds far fancier than merely saying "fritters"?  Or maybe it's because you don't find beignets as easily as you would donuts?  And there is a difference between the two.
I'm no expert but beignets are made with a yeast dough and also resemble choux pastry with its hallow center.  They puff up as the dough hits the hot oil and that deep-frying makes them crisp while the edges have a slight chewiness to it (which I love).  Flavor might not be intense (hence the justification of topping them with plenty of powdered sugar) but you taste the complexity from the yeast and get a little sweetness from the evaporated milk in the dough. 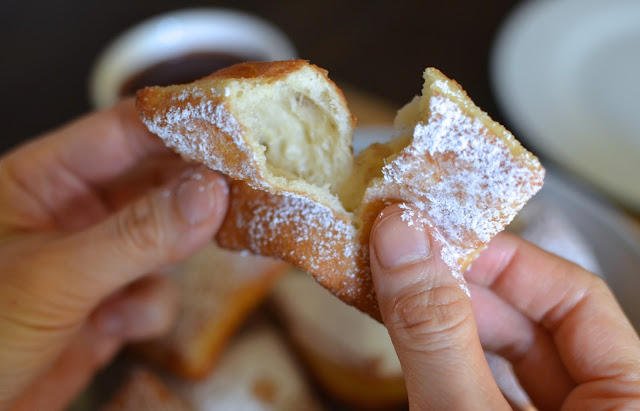 The hallow center in the beignets lends itself to a filling if you're inclined.  I opted out of the apricot filling in the original recipe and decided to keep my batch plain. However, I couldn't resist making a quick little chocolate sauce - essentially a chocolate ganache I made with equal parts chocolate and water.  It may not be necessary (the beignets are tasty enough on their own with a generous dusting of powdered sugar) but dipping sweet fried things in chocolate is always fun and delicious! 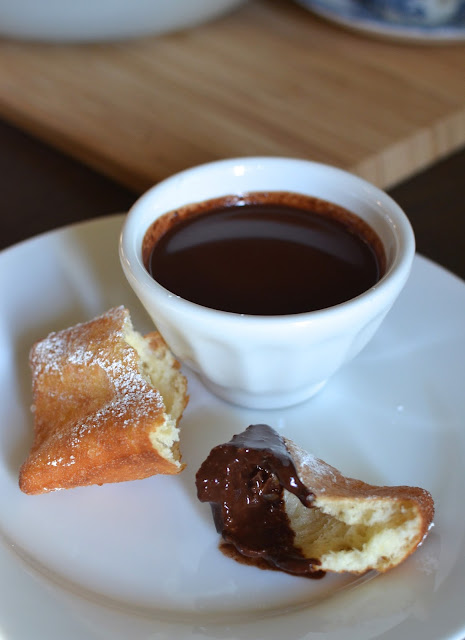 I prepped the dough the night before and we enjoyed beignets for breakfast last Sunday morning.  What a way to start the day!  It was totally worth the effort to fry and I was/am so happy the recipe worked out so well.  My family and I had a fun time indulging in this treat...and we can't wait to do it again!


Let's talk a little about this recipe.  It comes from French Country Cooking by Mimi Thorisson.  I mentioned recently how much I'm enjoying this book...it's a great read with plenty of amazing-looking recipe.  The beignet recipe jumped out at me because it's something I've been wanting to make for ages now.  And isn't it funny how no matter how much we cook and bake, there is always still an endless list of things we're dying to make or try!

I was nervous about making beignets.  I think that feeling is pretty natural when it comes to working with yeast dough, and frying.  I just decided to stick to the recipe and see how it goes but I warned my family that we might need to make a run for Dunkin' if things go awry!  Luckily, it all worked out!
Since this was project "beignets for breakfast", I went ahead and made the dough the night before so I wouldn't have to literally get up at 4am.  The recipe says to let the dough rise for 1-2 until about doubled, then refrigerating for "at least 30 minutes" before rolling and frying.  I made the dough - kneading by hand for about 10 minutes until the shaggy dough came together into a smooth ball - and let it rise for almost 2 hours until doubled.  Then I actually placed it in the refrigerator to chill overnight.  I had to assume it would be fine to let the dough sit overnight; I saw recipes that said a longer time in the fridge would let the flavor intensify so I took the small gamble and made the assumption it would work just fine. 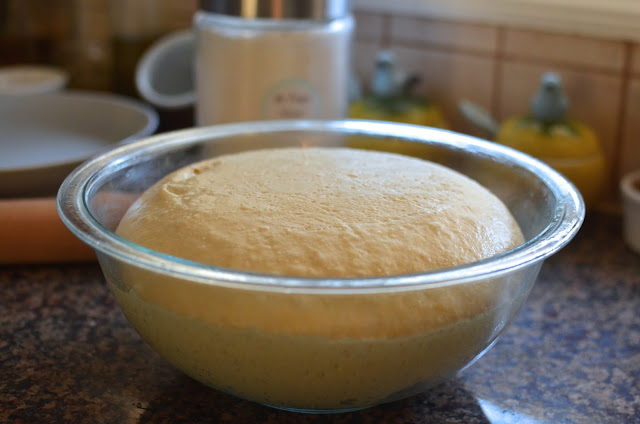 Here is the dough all puffed up and risen the next morning.  I took it out of the refrigerator and let it sit on the counter for a bit (just about 20-30 minutes) before rolling it out.  I followed the recipe and rolled the dough out to about a 1/8 inch thickness. 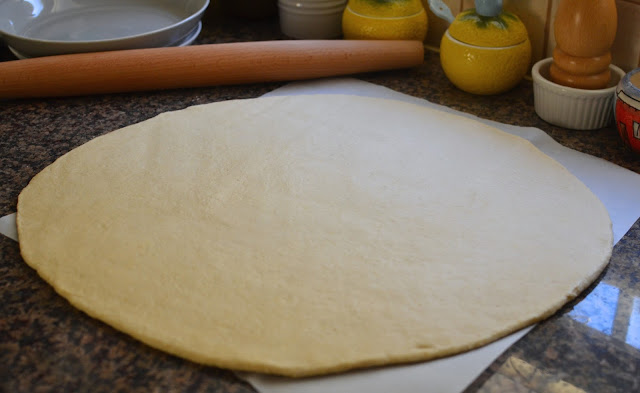 Next, use a pastry/pizza cutter or knife to cut about 3-inch squares (incidentally, I think the 3-inch square is a great size).  I was expecting a yield of about 25-30 but as you can see below, I had quite a bit more than that.  Since I had so many, I actually took about half the cut dough and froze them so there is another round of beignets in our future. [Update: After frying the previously frozen batch, I have to say the beignets are far better fresh.  I would not recommend freezing any of the dough after trying it.] 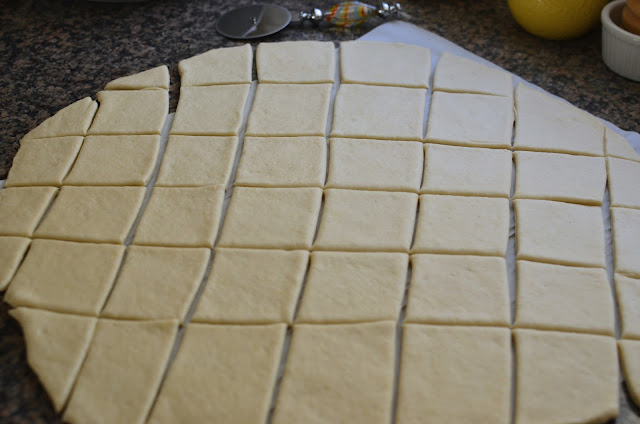 Now, it's time to fry!  It was very easy, no drama at all.  I used canola oil, heated to 325 degrees.  The frying temperature was lower than I expected but I stuck with the recipe.  I think that temperature allows for even cooking and I have no complaints. 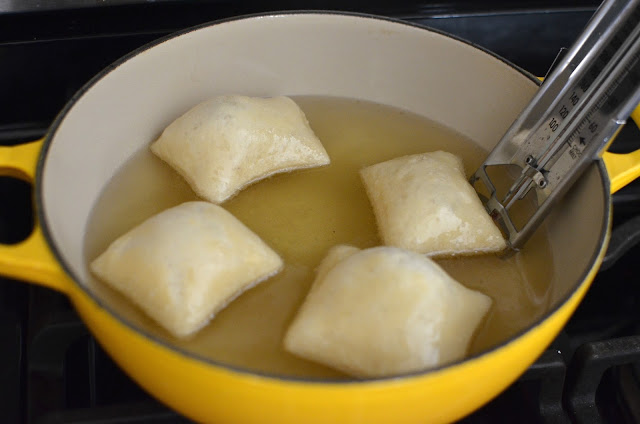 Gently drop the squares of dough into the oil.  I used a small pot so I fried just 4 at a time.  If frying in a number of batches, preheat your oven to 200 degrees so you can keep the beignets warm for a bit until serving.  The good news is they take very little time to cook!  Once they hit the oil, you'll see the dough sizzle and puff up (good sign) and once they turn golden in a minute or two, turn them over so you can achieve the same thing on the other side. 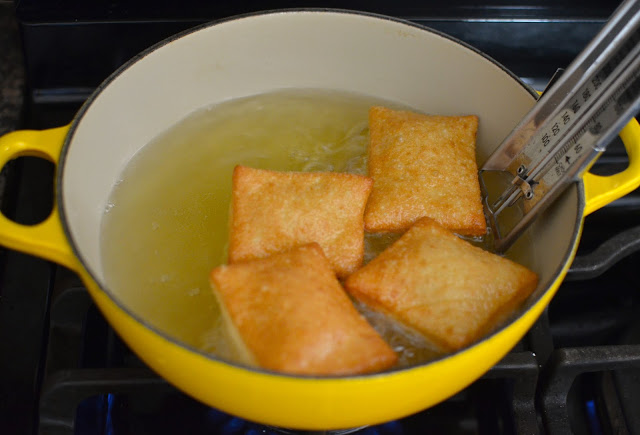 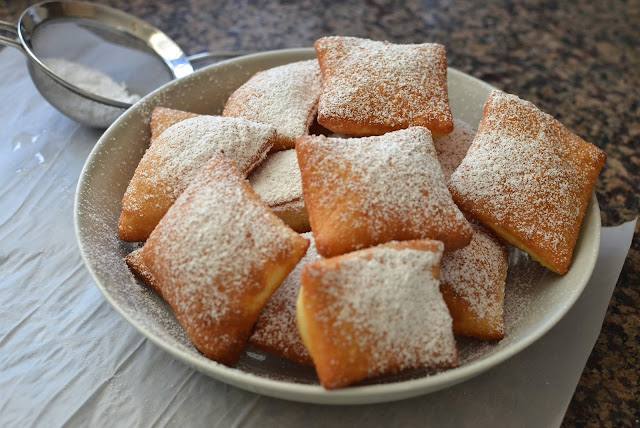 Race them to the table (with or without chocolate sauce on the side) and dig in with your family.  They are most amazing when they're still warm! 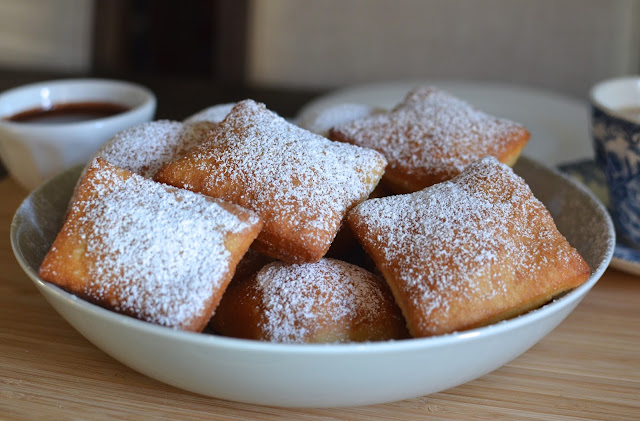 This is definitely one of those times when I'm impatient to take a few photos and get down to the business of eating with my family! 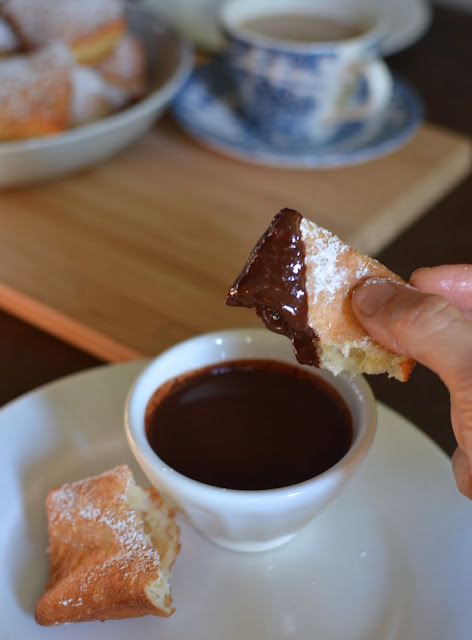 It was so delicious and fun!  I highly recommend treating yourself and your family to some beignets for breakfast!

Vegetable or canola oil, for frying
Powdered sugar, for dusting

Make beignet dough: In a measuring cup or small bowl, dissolve the yeast in 1/4 cup (60ml) of the warm water.  Let sit for about 5 minutes.

In a large bowl, mix the flour and salt together, then make a well in the center.  Add the yeast mixture into the well and begin incorporating it into the flour (I used a stiff/sturdy rubber spatula).  Gradually add and incorporate the egg, butter, sugar, and vanilla.  Pour the remaining 1/2 cup (120ml) warm water over the mixture, mix it in, then gradually mix in the evaporated milk.

Turn the dough out onto a lightly floured surface and knead until dough becomes soft and supple, about 10-15 minutes.  Shape the dough into a ball.  Lightly oil a clean bowl and place the dough inside.  Cover with plastic wrap and let rise at room temperature until doubled in volume, 1-2 hours.

Refrigerate the dough for at least 30 minutes before rolling.  (To make ahead, I refrigerated the dough overnight at this point.)

Fry and serve: Remove the beignet dough from the refrigerator.  On a lightly floured surface, roll the dough to a 1/8-inch thickness.  With a pastry cutter or knife, cut into 3-inch squares.  Pour 2 inches of oil into a large heavy-bottomed pot and heat over medium heat to 325 degrees F (160 degrees C).  Use a thermometer or test by dropping a small piece of dough into the oil; if it sizzles and quickly turns golden, it is ready.

Working in batches, fry the dough squares in the oil until golden and puffy, a minute or two on each side.  Remove with a slotted spoon and let drain on paper towels. If needed, you can place fried beignets in a 200 degree oven to keep warm while working in batches.  Serve beignets while they're still warm, with a generous dusting of powdered sugar, and chocolate sauce on the side (if desired).

Chocolate sauce: Place chopped chocolate and water in a heatproof bowl on top of a pan of just simmering water.  Stir until chocolate is completely dissolved. Remove bowl from the heat and let cool, stirring occasionally until sauce thickens a bit.  Divide into individual small serving bowls and serve with the beignets.