If you're like me, you think that just about everything is better with an egg, or two, on top.  I love eggs, cooked every which way.  They are a wonderful addition to a dish, instantly bulking it up, providing you with a garnish and, often, a ready sauce if a runny egg yolk is involved. 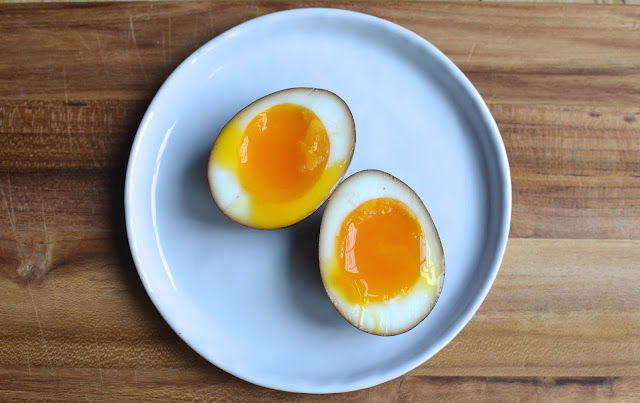 A fried egg is probably my go-to but I also love soft boiled eggs.  Every so often, I have one with a sprinkle of coarse sea salt on top with breakfast and it reminds me that simple things are so good and so satisfying.

Recently, I tried my hand at making soy sauce eggs (or "shoyu tomago") following a simple recipe from Christina Tosi's Milk Bar Life that was published on Food52.  It sounded easy enough and it was.  You boil eggs for just under 7 minutes, shock and peel them, then marinade the eggs in a mixture of soy sauce, water, sherry vinegar and sugar for a few hours. 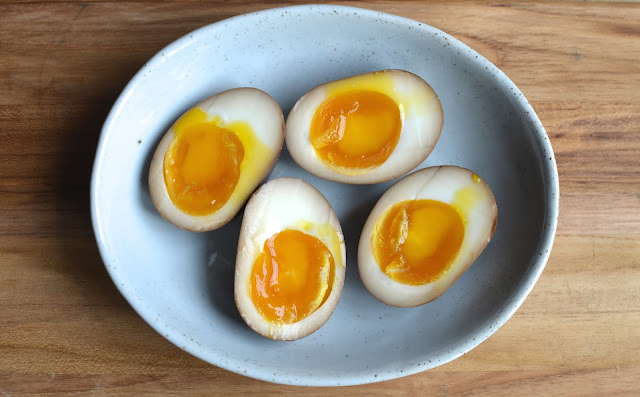 You end up with these soft, runny eggs that's salty and flavorful.  If you enjoy ramen, it's likely you've encountered one of these soy sauce eggs on top of the bowl.  These eggs are certainly great with ramen or any bowl of hot soup noodles.  They're also good with rice or just alone as a savory snack.  I paired the first eggs out of my batch with soba noodles dressed in a miso dressing. 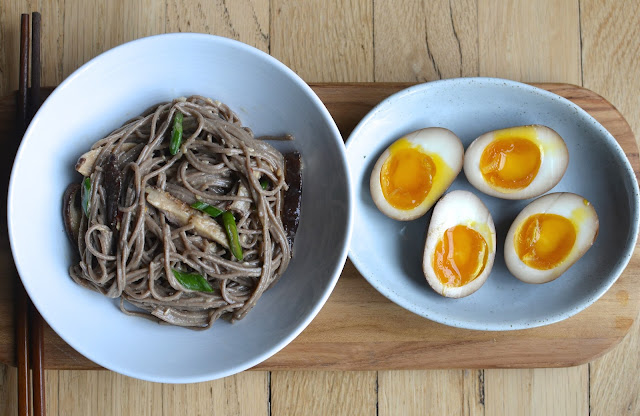 There's a lot of salty flavors going on here today but I think I could do with a little savory to balance out all the sweet we have rotating around here. 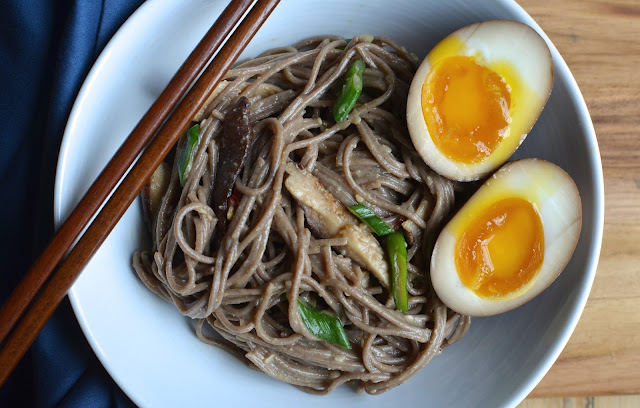 Making these eggs is easy.  Start by boiling half a dozen eggs (or add an extra in the mix if you're concerned about breakage; I also found I could have easily fitted an extra egg in my marinade bowl).  To get them to the soft boil, slightly runny, style you see here, I followed the recipe's advice to cook them for "exactly" 6 minutes and 50 seconds.  Obviously, you don't need to be quite so precise and you can adjust the time depending on how you like your eggs.  For what it's worth, I started with relatively cold eggs.  I took them out for maybe 10-15 minutes before they went into the boiling water. 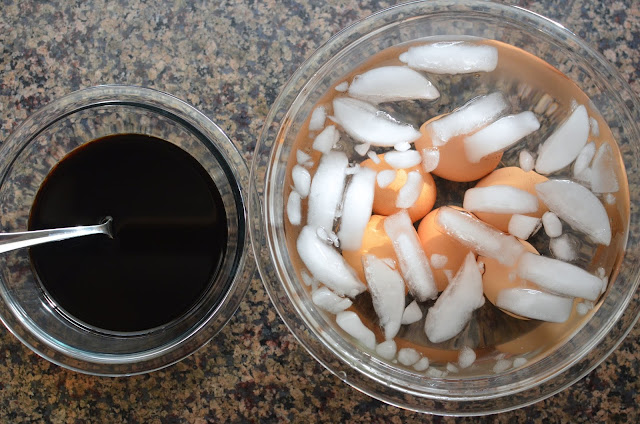 When time is up, plunge the eggs into ice water and let them sit a bit before peeling in the water.  I generally have difficulty peeling eggs but I was thrilled with how well this method works! 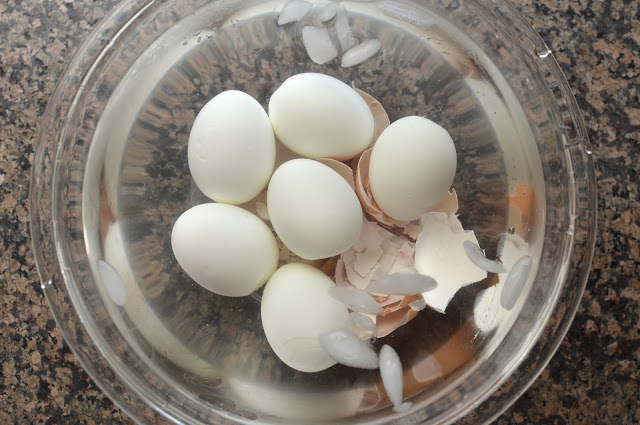 Remove the peeled eggs and get them ready to go into the soy sauce mixture.  It's 3/4 cup soy sauce - I used half cup of low-sodium and 1/4 cup regular soy sauce. I ran out of low-sodium soy sauce and to be honest, I generally prefer using regular strength soy sauce and I'll just use less or even dilute it with water instead of going low-sodium.  Adjust the length of time you marinade the eggs depending on which you used.  I marinaded my eggs for just about 4 hours or so and they were plenty salty. 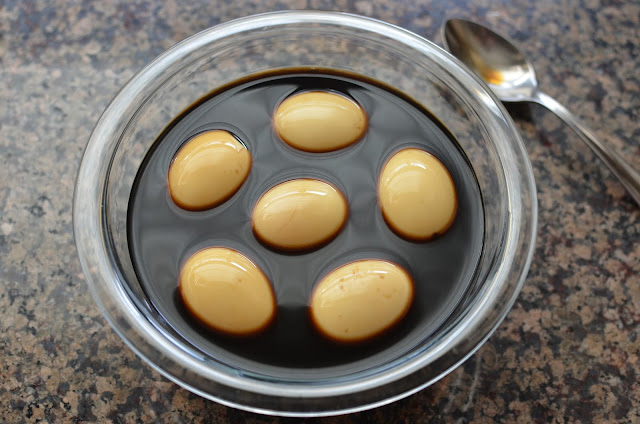 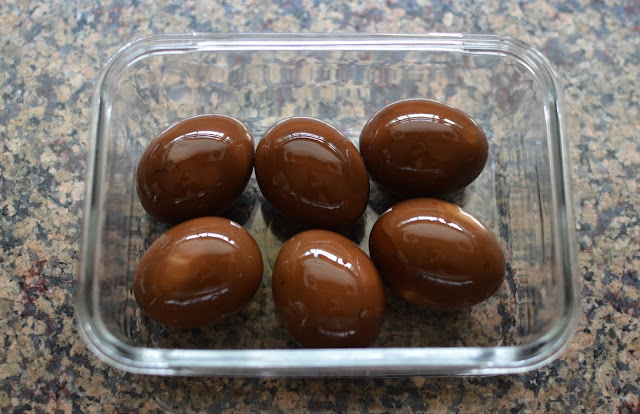 Remove eggs from the marinade and store them in a sealed container, in the refrigerator, for up to a month.  Neat! 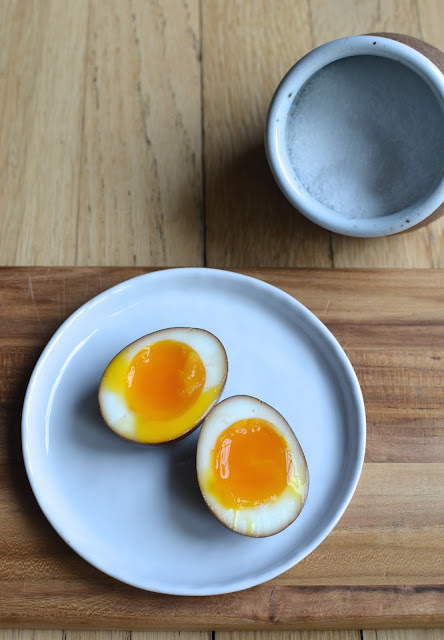 I first paired my eggs with the miso-dressed soba noodles that I've made before...and then I couldn't resist fixing up a bowl of ramen.  I used a fresh ramen package that you can find in the refrigerated aisle of many Japanese/Asian markets, and simply doctored it up with some veggies (in this case, napa cabbage and corn) and the eggs. My husband enjoyed a big bowl for lunch over the weekend. 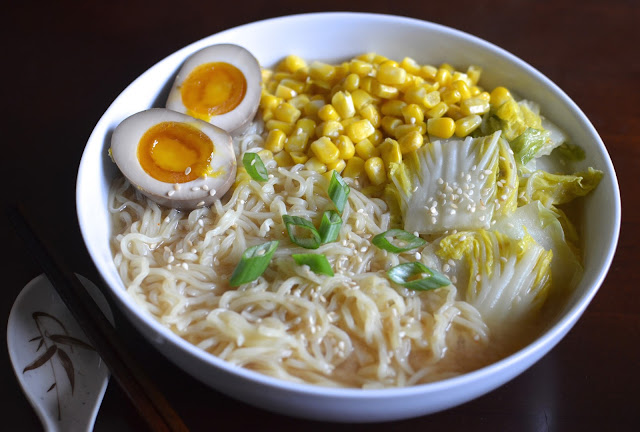 I've gone on to make a second batch of these soy sauce eggs (reusing the marinade) and I plan to serve them with some rice porridge for a Chinese-style breakfast over the coming weekend.  That'll be fun!

In a medium-bowl, whisk together the warm water, sugar, sherry vinegar, and soy sauce.

To boil eggs: Bring a large pot of water to a boil.  Carefully place eggs into the water (I used relatively cold eggs taken from the refrigerator about 10-15 minutes before cooking).  Cook for 6 minutes and 50 seconds (this will get you the soft boil, runny eggs you see in this recipe), stirring during the first 1 1/2 minutes to evenly distribute the heat.  I keep the lid uncovered while cooking.

In the meantime, fill a large bowl with cold water and ice.  When eggs are done, transfer them immediately to the ice bath.  Let sit for a few minutes until eggs are cool and the water is not too uncomfortably icy to work in.  Peel the eggs in the ice water (this makes peeling easier, helping to keep the exterior intact).  Transfer the peeled eggs into the soy sauce marinade, making sure they are fully submerged (place a small plate on top, if necessary; I did that and gave them a stir once or twice during the marinade time).  Marinade for 2 to 6 hours (I marinaded mine for 4 hours).

Remove eggs from marinade and store in an airtight container, in the refrigerator, for up to a month.

To serve, slice in half lengthwise.  Enjoy it as is, with a sprinkle of coarse salt and pepper, or serve as a topping for noodles or rice porridge.