Snow is coming!  After enjoying an unusually mild winter so far, it sounds like we may get our first true snow storm of the season this weekend.  I've done my grocery shopping and I'm ready for a lot of home-cooking and eating in the next couple of days. It's cold winter weekends huddled at home that give me time to whip up different things, including desserts, that I've been wanting to make.  For instance, this bananas foster... 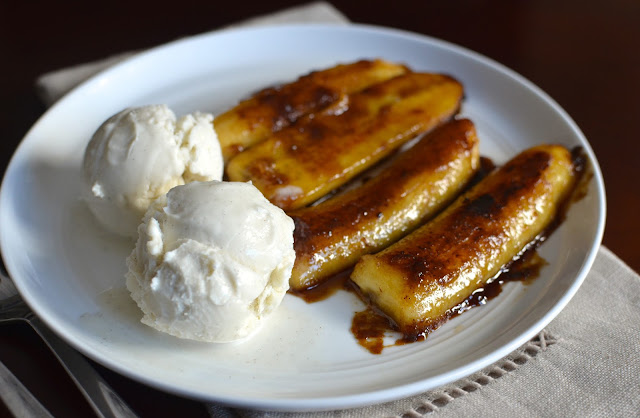 Is it odd that snow/cold weather makes me think of ice cream?  At least I tend to think of pairing it with something warm.  So this post is timely...for me, at least.

Actually, I wanted to make bananas foster for my husband when I caught an easy recipe for it (no flambeing involved).  He's a big fan of banana desserts, not only in baked goods form, but where it takes center stage on a plate.  I wasn't always a big fan of such a thing but I've been reformed in the last decade, for better or worse. 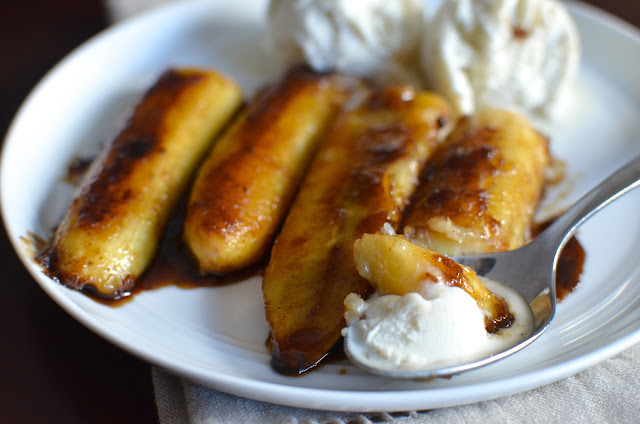 So bananas foster.  It isn't something I see on a restaurant menu often but if you like bananas, you know the allure of warm, sweet, caramelized bananas, kissed with the flavors of rum and a little cinnamon.  Add on the contrast of ice-cold vanilla ice cream and it's easy to know why it's a special dish many people enjoy.  Aside from the flavor, I really adore the contrast of warm bananas and cold ice cream in each bite. When I made this last weekend, my main concern was to get it on the table and into our mouths while it was still warm and cold at the same time.  A few clicks of the camera and we cued to the important stuff: eating.


For our little afternoon treat, I scaled down the recipe into this serving that's generous for one and good enough for two to share (if the two involved are willing). Think of it as a little winter treat, something to fortify you after a serious bout of snow-shoveling, which appears to be in our near future.

Making small portions can be tricky (the recipe listed below is half the original, using two bananas vs. the one large one I used).  I wish I'd ended up with more sauce but with a hot cast iron skillet and working with small amounts, the sauce thickened rather quickly.  Maybe I should've just added more rum to thin things out!  In any case, the recipe is simple and fast; there's no theatrical flambe involved (which is a much safer bet for me) and you likely have everything you need on hand so you can make this even in a snow storm.  My banana dessert-loving husband definitely gives it two thumbs up. 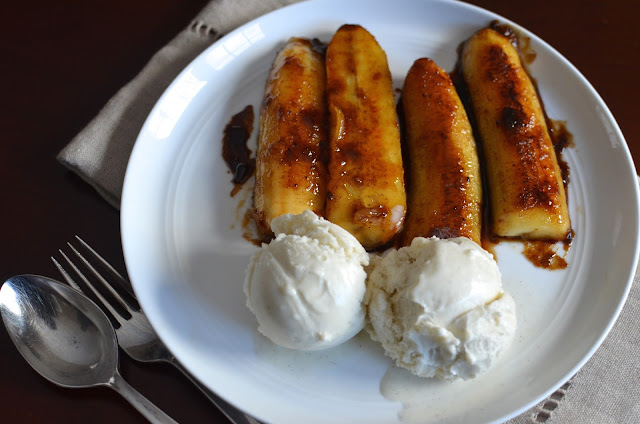 Have a happy weekend - whether it's covered with snow or not!  Will it involve ice cream?  Hot chocolate?  Or maybe both?

In a small saucepan or skillet, combine the rum, vanilla, brown sugar, molasses and cinnamon.  Heat over medium-heat, stirring until brown sugar dissolves.  Turn off the heat and leave on the stove to keep warm while you continue.

Warm a cast iron skillet over medium heat.  Add butter and allow it to brown slightly, then add banana slices in a single layer.  Sprinkle a small pinch of salt over the bananas.  Cook for about a minute, until bananas get a chance to brown and sear. Flip and let the other side cook for about 30 seconds or so.  Pour in the rum mixture and gently stir to coat.  Serve immediately with vanilla ice cream, and dig in!