What's a girl to do when she has a little bit of heavy cream left in the fridge? I could have tossed it into a bit of pasta sauce for dinner or maybe whipped it up to serve alongside any number of chocolate desserts that I can't seem to resist making regularly, but instead, I thumbed through my little collection of cookbooks for something to bake.  And in this case, I wound up making a batch of marble cupcakes. 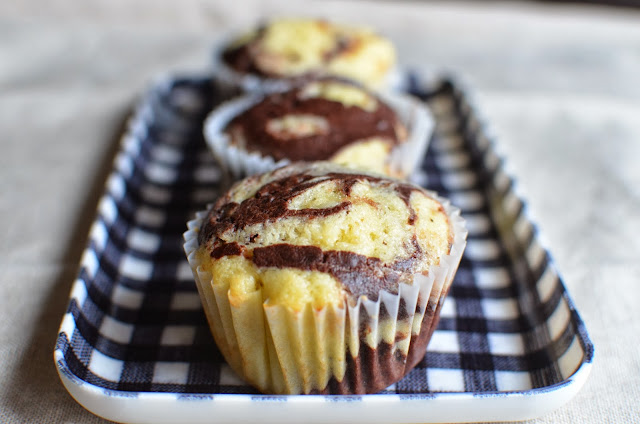 I've made marble loaf cake before and interestingly enough, I realized (literally only as I'm writing about it now) that it was right around this time last year, after Hurricane Sandy, that I did that for the first time.  I don't know if there was some memory trigger at work that spurred me on to this but marble cake makes an appearance again.  There's something about the black-and-white swirls that appeal to me.  I was happy to learn the simple technique on how they're made a year ago and I was again happy to play around in my kitchen and make the cupcake version a year later.

Marble cakes are simple yet special - to me, anyway.  You get the best of both worlds: vanilla cake and some chocolate at the same time. The chocolate portion comes together from the same batter, with a mixture of cocoa-water stirred in.  Some recipes use melted chocolate but I like cocoa because it gives a nice strong flavor without adding more sweetness.  Plopping the alternating batters into the muffin liners and running a skewer through it, it's fun to see how they bake up and turn out.  No two are quite the same. 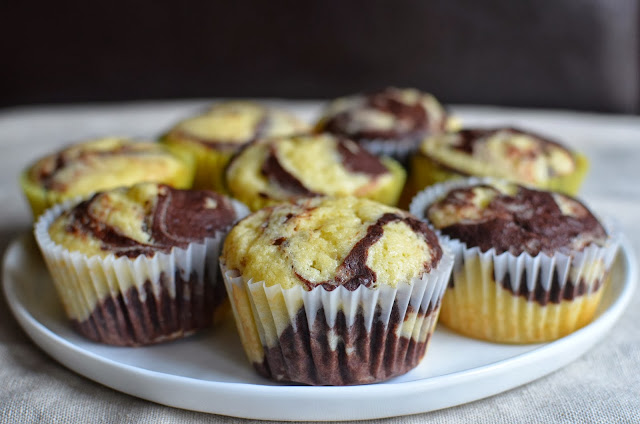 These cupcakes have richness from butter, whole eggs and a mixture of milk and cream (that's where the extra cream in the fridge came in).  I think they're just right without the need for any glazes or frosting.  These are my kind of simple snack cakes to have around the house, to enjoy any time of day.  I can't seem to have enough of those! 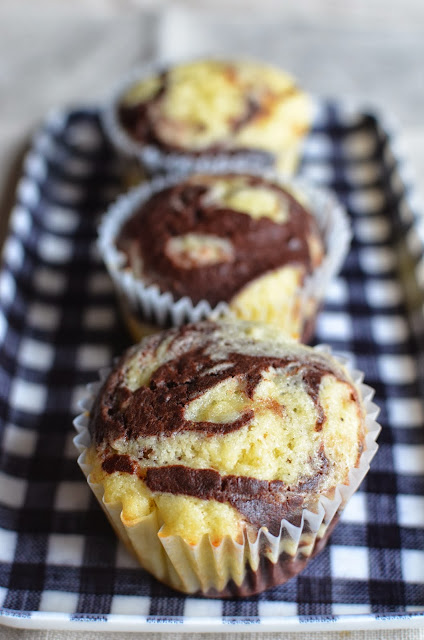 Sift cake flour, baking powder, and salt together in a bowl.  Combine milk and cream in a measuring cup.

Cream butter and sugar in the bowl of a stand mixer on medium-high speed until mixture is pale and fluffy.  Add eggs, one at a time, beating well after each and scraping down the sides and bottom of the bowl as needed.  Beat in vanilla.  Add flour mixture in 3 batches, alternating with the milk and cream mixture, starting and ending with the dry ingredients and beating until incorporated.

To make chocolate batter, remove 1 cup of batter to a separate bowl.  Mix cocoa and boiling water together in a small bowl and add to this reserved batter, stirring well to combine.

Fill paper liners with alternating spoonfuls of vanilla and chocolate batter, filling each about three-quarters of the way.  Using a skewer or the tip of a paring knife, make a figure-eight motion to create a swirl effect.  Don't over do it (since you want distinct swirls, not a muddy look).

Bake, rotating pans halfway through, until tops are golden and a cake tester inserted into the center comes out clean, about 20 minutes.  Transfer tins to cooling racks and allow to cool completely before removing the individual cupcakes.

Store cupcakes overnight in an airtight container or freeze for up to 2 months.