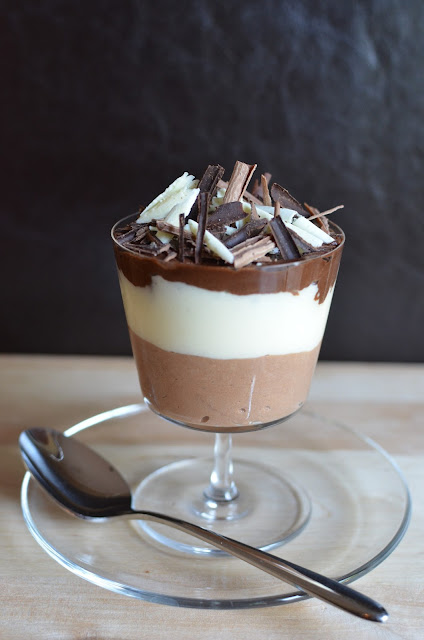 When I think parfait, I see layers of cold treats - anything from ice cream to pudding, custards, whipped cream, fruit, or even jello.  It might have made sense to go with something light and fruity given how incredibly hot it's been but you know me...I always think chocolate.  I know I really should have worked "chocolate" into the title of my blog since most of my recipes feature it! 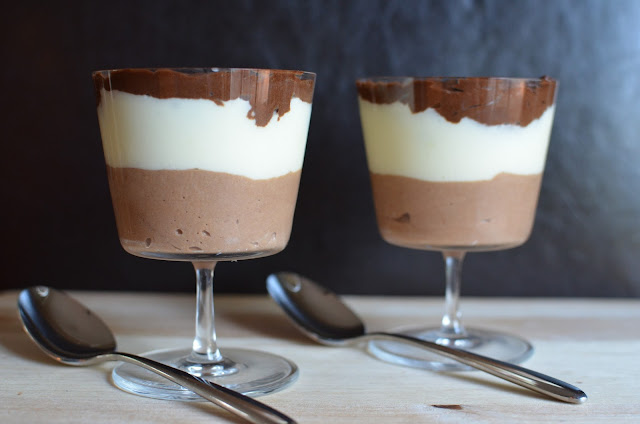 Here's the rundown on this triple chocolate mousse.  It contains heavy cream and egg whites (no yolks). If using raw egg whites bothers you, you can look for pasteurized egg whites.  You can refrigerate or freeze these parfaits, and the texture of this mousse is actually quite firm (as opposed to airier versions like this French chocolate mousse), which makes sense since we're stacking them here.  In fact, you can actually make this into a triple chocolate mousse cake - literally sliced to serve - if you're so inclined.  The cake idea is an impressive one but I like the simplicity of the little parfaits.

For my own needs and preference, I scaled the original recipe way down to one-third the original, using 3 ounces of each chocolate.  This made about 2 1/2 parfaits in my case but it all depends on the size of the serving dish you use.  If I had smaller glasses, I would've liked to make a few more, smaller portioned ones.

Working on a small scale makes the process more manageable and it really isn't as involved as it might seem. If you have three mixing bowls and spatulas, you're in business, because all you're really doing is folding whipped cream, then egg whites, into each melted chocolate to make the mousse before layering them on top of each other. 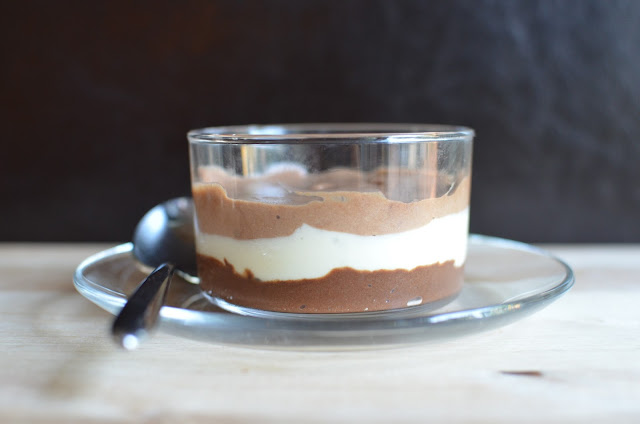 
To make the 3 kinds of chocolate mousse, I started by chopping up 3 ounces of milk, white, and dark.  I did this the night before; I always like to try and get any prep work done in advance so it's not quite such a project all at once. 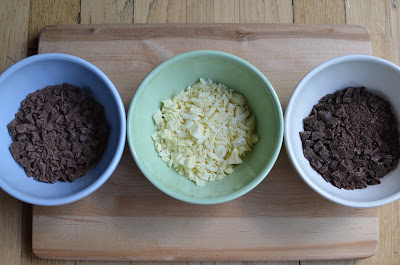 While you're at it, take a vegetable peeler and make some shavings of each to decorate your parfaits.  It's very easy to get these kind of shards from the softer white and milk chocolates but I find that just warming the dark chocolate with your hand before shaving does the trick (I have air conditioning but it was about 95 degrees that day, after all). 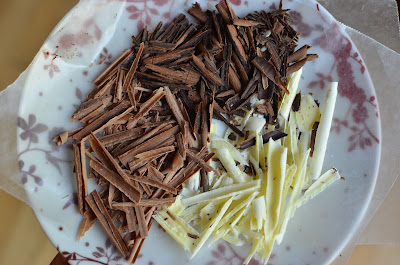 Now, here's the thing about melting the chocolates...you can take a shortcut and microwave the chocolate - very slowly and carefully - if you're confident but keep in mind that you're working with a small amount of chocolate for each so it's easy to over-heat it. If going with the microwave route, I'd start slow and stir often.  It won't take long for the chocolate to melt and it might be a good idea to set a small amount of the chopped chocolate aside to stir into the melted at the very end.  Special care needs to be put on the white chocolate in particular.  It's very easy to over-heat white chocolate. 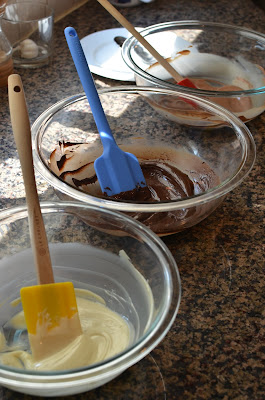 Since I had enough bowls, I decided to put my chocolates into heatproof bowls and melt them over a pan of barely simmering water.  Once that's done, let the chocolates cool so you're not mixing the cream and egg whites into hot chocolate.  I needed 3/4 cups of cold heavy cream and decided to get a workout by whipping it up by hand, with a whisk. 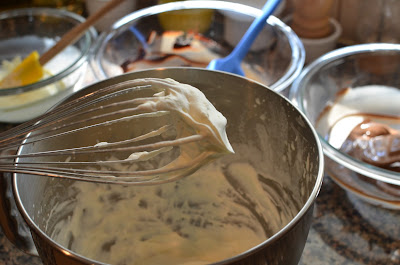 I do have a tendency to over-whip things because once you finally get there, it's hard to resist showing off or something.  It's finally easy at that point! Anyway, I resisted (just barely) and stopped in time to divide the cream into each bowl of cooled chocolate. 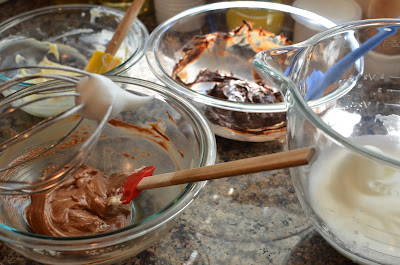 Next comes 3 whipped egg whites.  The whites should be firm but not dry - a delicate balance I always find difficult to achieve when there is no sugar being added to the whites to stabilize them.  I think I managed fairly well.

Once the egg whites are divided among the chocolates and folded in, you can layer the mousse into your glasses or bowls. 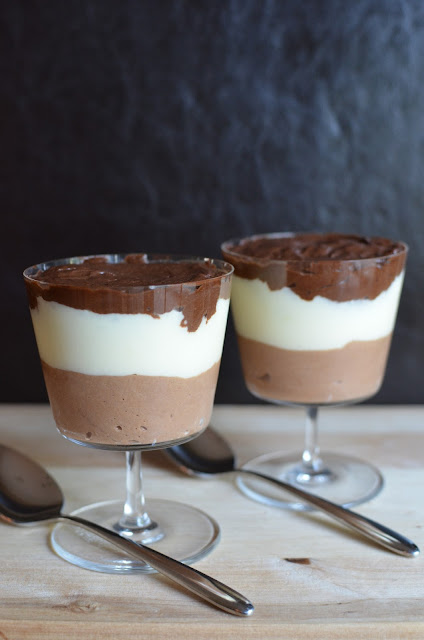 After making and eating these, I actually think it's best to layer the dark chocolate mousse down at the bottom first because that's the densest layer. I'd follow it with white, then the milk chocolate mousse.  I did that combination in the smaller shallow dish I used.  I also find it's a lot easier to eat the mousse in a shallow dish with room to scoop.  That's just my two cents on the matter. 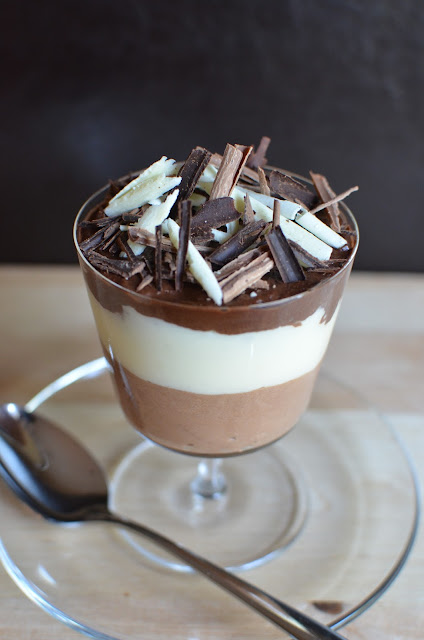 Triple Chocolate Mousse Parfait
Adapted from The Great Book of Chocolate by David Lebovitz
(This recipe is one-third of the original; you can triple the recipe to its original volume and layer the mousse in a greased 9x3-inch springform pan to make into a cake)

* This recipe uses raw egg whites so use organic or farm fresh eggs.  You can also look for and use pasteurized egg whites.

Place the 3 types of chopped chocolates into individual heatproof bowls.  Melt each over a pan of barely simmering water, one after the other.  While melting chocolate, stir often (particularly being careful not to over-heat the white chocolate) and do not let any water touch the bowl or chocolate itself. Set aside and let cool to lukewarm.

Whip the cream until it reaches firm, soft peaks (I did this by hand using a large, cold bowl and whisk).  Be careful not to over-whip or the cream will curdle.

Whip egg whites in a clean bowl until they are thick and hold their shape. Don't over-whip or the whites will be dry and break apart.

Fold one-third of the egg whites into each chocolate mousse filling until smooth and incorporated.

To make parfaits, spoon dark chocolate, white chocolate, then milk chocolate mousse, respectively, into a glass, gently smoothing the top of each layer with the back of a spoon.  Chill the parfait, or freeze, for about 6 hours before serving.  Top with chocolate shavings, if using, just before serving.