Add a little peanut butter to your weekend morning French toast?  Why not!

The other night, the boys went camping...right in our own backyard.  Yes, mom (that would be me...) was not a good sport and prefers the comforts of home - particularly during a heatwave - so it was a boys' outing.  By "boys", I mean my husband and our one and only 8-year old (I still can't believe he's 8 already!).  For my part, I thought I'd stick with what I know best and that's provide the meals.  I made French toast for breakfast the next morning and decided to stuff my husband's with peanut butter since I know it's a combination he enjoys. 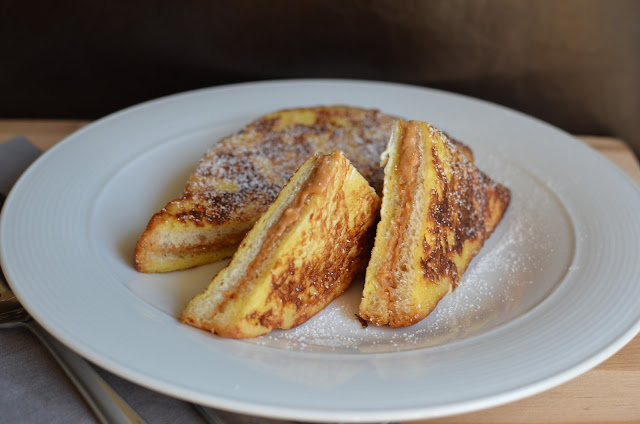 As you can imagine, it couldn't be simpler, which made me wonder why I'd never done it at home before.  I suppose it's because I've only started cooking much more regularly in the last couple of years; we ate out and ordered takeout a lot more often.  Though I've barely scratched the surface in terms of learning, it's pretty amazing to think about how far I've personally come (which is to say, probably not very far by most standards - as shown by this simple French toast - but a long way for me).  I love being able to provide my family with basic meals...and desserts.

For this breakfast, I basically took the last French toast recipe I made and instead of banana and nutella, I slathered a combination of creamy and chunky peanut butter onto the bread before proceeding.  It's sort of an ode to something my husband occasionally orders at Hong Kong style cafes - a type of restaurant I have a deep love for (being from Hong Kong and a big fan of cafe culture in general).

When we do visit one of those casual cafes, we order milk teas and enjoy any number of small plates. Once in a while, my husband will order the peanut butter French toast as dessert!  My version here is far lighter compared to the deep-fried square that comes to the table laden with extra butter. (Check out this article to see what I'm talking about.)  Nothing wrong with sharing one of those on the rare occasion but one of the best things about cooking at home is being able to make healthier versions of our favorite restaurant dishes.
And instead of milk tea, I suggest another frozen beverage to go along with this breakfast.  I've been making those mock mocha fraps almost daily now that summer is here and it's so hot!  We love it, and I can't get over how much money I'm saving (or how much money I used to spend)!

The little guy got plain French toast sticks (he can be such a purist in many way - he is the only kid I know who forgoes toppings at the frozen yogurt shop!) and chocolate milk made with homemade chocolate sauce.  The campers were early risers and hungry after a night in the great suburban outdoors!  I'm told the birds start chirping at 4am.

If you're up for it, you can stuff these together with some jelly (I've never been a peanut butter and jelly girl myself though) or add a little honey, banana, or whatever your taste-bud fancies.  I have a feeling you're a lot more creative and adventurous than I am. 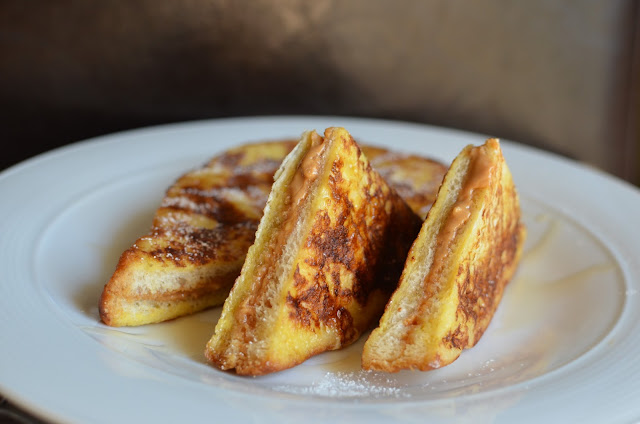 I've made this twice in less than two weeks.  My husband is a little hooked, I think.

Crack the eggs into a shallow rimmed plate.  Lightly beat the eggs with a fork and then gently beat in the milk, sugar, and vanilla extract.

Take two pieces of bread and spread 1-2 tablespoons (or desired amount) of peanut butter over each.  Top each with another slice to make a sandwich.

Heat a couple of teaspoons of canola oil in a non-stick skillet over medium-heat.  Dip the sandwich into the custard, turning it and making sure it's fully coated throughout.  Gently place it into the hot skillet and cook, about 2 minutes on each side, until French toast is golden brown.  Repeat with the other sandwich.