This probably sounds as hard to believe to you as it did to me, but the crust for this blueberry crostata I made really just takes one ingredient. 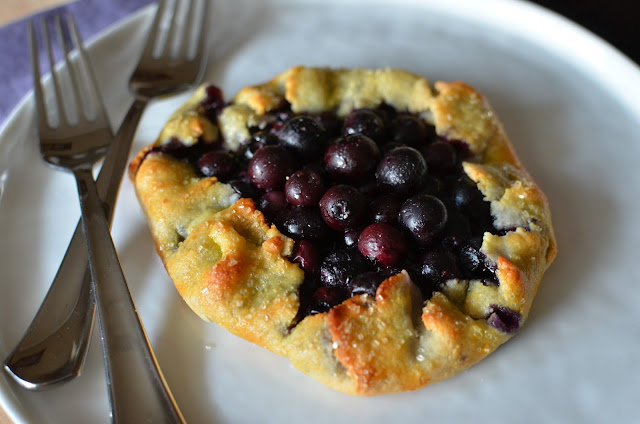 And that single ingredient is...almond paste!  I saw this wild idea on TV and I was seriously amazed and had to try it for myself.

Almond paste is one of my favorite baking ingredients and I normally prefer canned but the recipe calls for the kind in a tube (bonus: it's easy to find in most supermarkets) and I took the safe route and followed directions.  I say just stick with the tube variety for this purpose because it works; I was impressed by how easy it was to roll out.  You literally divide the tube of almond paste into 4 pieces.  Take one piece at a time, smash it down with your palm, and roll it out into a rough 6-inch round.  It literally takes a couple of minutes to make one!  I was worried the almond paste would break apart, be either too dry or too wet and sticky but none of that was the case. 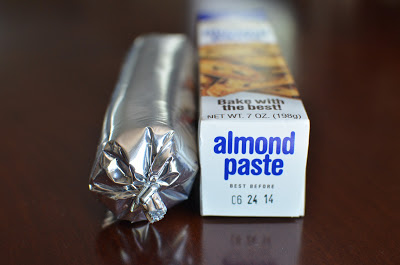 Guess who this fairly-genius idea came from?  Brian Boitano!  As in...the figure skating champ, gold medalist.  He had a show on the Cooking Channel a while back and he was on The Chew recently promoting his new cookbook.  Funny enough, I always thought Brian Boitano was the very picture of seriousness and intensity so who knew (after watching his cooking shows) that he's actually so fun-loving, not to mention good in the kitchen!

So on this show, he prepared pear and almond crostatas, made with the almond paste crust.  I sat up straighter and kept asking my husband if I was hearing it right!  I hit rewind a few times (watching on DVR) to make sure.  I'd never heard of such an idea and you don't often hear something new... 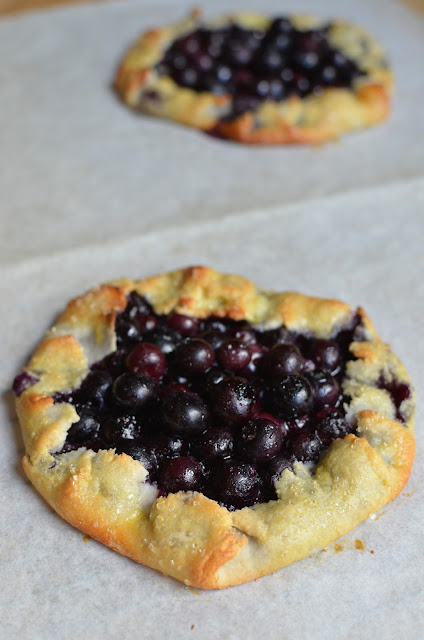 Now, I know about using almond paste as a layer of filling in rustic tarts, like a galette.  Last Fall, I made an apple-frangipane galette that I'm actually really proud of (because it was my first attempt and was delicious).  In it, I layered frangipane - an almond pastry cream made of almond paste, butter, sugar, and eggs, under the apples.  The frangipane not only added great flavor but created a barrier between the fruit and the galette crust that kept the crust firm and crisp.  But using just almond paste and nothing else for a crust?! 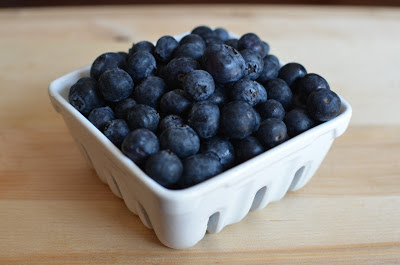 As you can see, I opted to use blueberries instead of pears to make blueberry crostatas (I particularly like blueberry tarts).  I winged it a little and just tossed my blueberries with a little sugar, lemon juice, and cornstarch before layering it over the rolled out almond paste.

I need to tell you that I took shortcut to the extreme with this!  I skipped the cream cheese filling that Brian spreads on top of the almond paste and under the fruit.  Here's my rationale: I was simply making two to eat with my husband and to test the general idea of this crust.  I also wanted to keep it light and quick.  I actually thought mascarpone cheese might be even better than cream cheese but I had neither in the house.  Without the filling though, the bottom of my crostata crust was wet and it was hard to remove from the parchment.  I expected that (though hopeful for a miracle) but if you are making these to serve to guests, follow the recipe and make the cream filling, which will not only add some richness but should act as some barrier to the moisture in the fruit to keep the crust firmer on the bottom.  A "normal" pastry crust would obviously hold up a lot better without a filling. 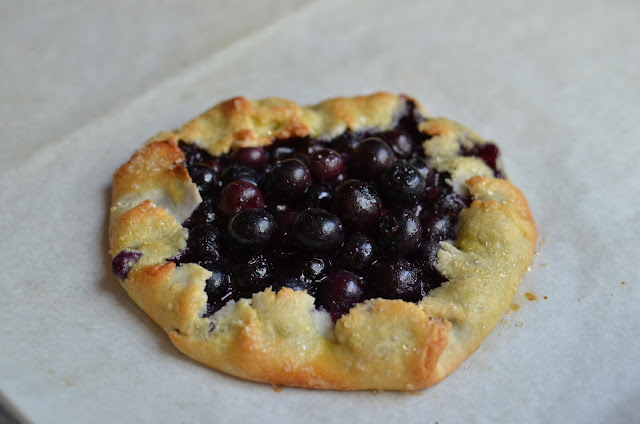 Now that all disclosures have been made, I have to tell you that I'm really impressed by this idea from Brian Boitano.  You get this nice, tasty crust with so little work.  The crust obviously does not taste rich and buttery.  I love that it's a lot lighter.  There's almond flavor and the texture is crisp yet chewy as you expect from almond paste.  You know the fold-over is the best part of a galette or crostata crust and it's the same way here...that edge is crisp yet chewy and a little extra sweet with the turbinado sugar dusted on top before baking.

It's always great to learn something new and I think this is a really cool trick!

I hope you're having a good Memorial Day weekend!  I have a lot of admiration and gratitude toward those who served, and are currently serving, our country.  We are truly lucky to have the freedom that we enjoy.


Here's how simple it is to make the almond paste crostata crust.  Unwrap your tube of almond paste and cut it into 4 pieces. 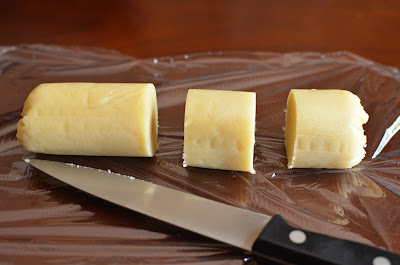 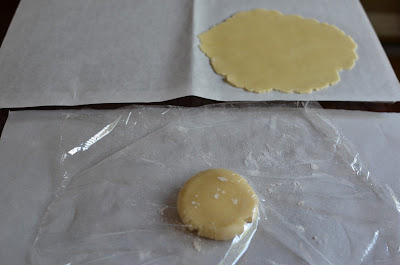 Then, simply roll it out into a 6-inch round.  It's very easy and the almond paste stays really smooth and easy to pick up and move around.  The best thing about these rustic tarts is you don't have to worry about it being exactly round.  At 6-inches, the crust will only be about 1/8 of an inch thick. 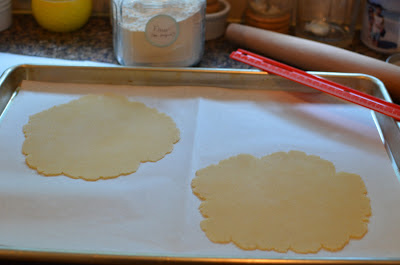 At this point, you would layer on the filling that I mentioned earlier, the one I omitted.  As you can see from the recipe, it's basically a cream cheese filling, sweetened and thickened with egg and flour.  I would like to try it with mascarpone cheese instead of cream cheese.

So all I did was take a cup of blueberries (for the two small crostatas I was making) and tossed it with a little less than 1 tablespoon of sugar (my blueberries were really good, hardly tart), 1/2 teaspoon of lemon juice, and 1 1/2 teaspoons of cornstarch (to absorb some of the juice from the berries as they bake). 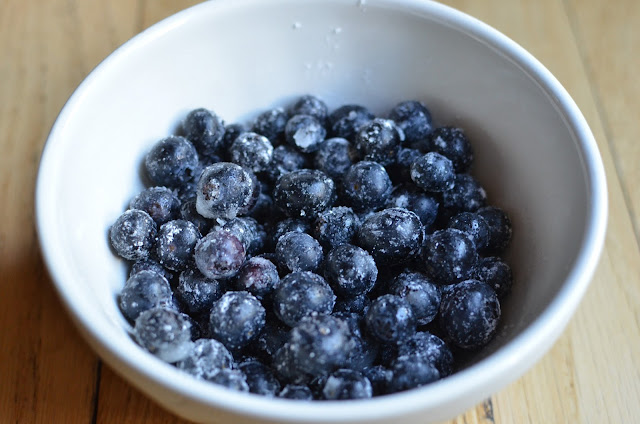 Heap the filling onto the center of the crusts, leaving a half inch border. 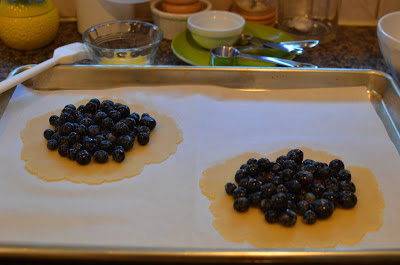 Then gently fold the border over the edge of the fruit.  This border is the best part of the crust! 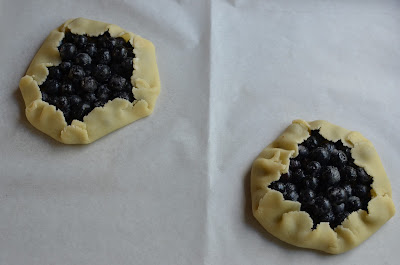 Then, brush that edge with egg wash and sprinkle it with some coarse turbinado sugar. 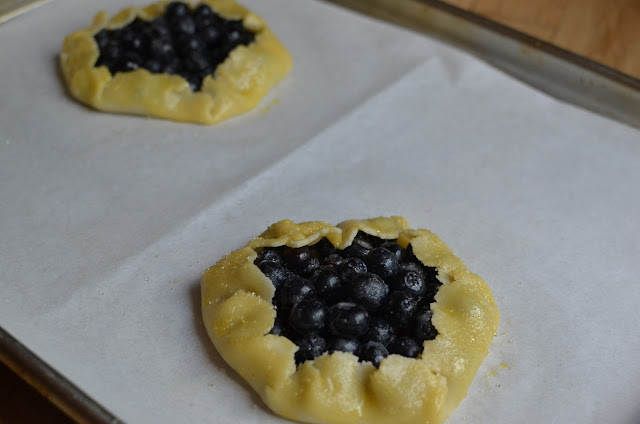 These take about 20 minutes in a 375 degree oven.   polished it off very quickly, soggy bottom and all! 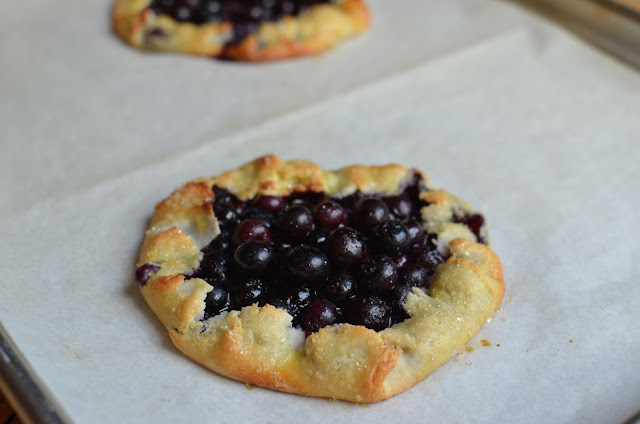 For crust:
One 7-ounce tube of almond paste

Preheat oven to 375 degrees and position oven racks to the upper and lower thirds of the oven.  Line 2 baking sheets with parchment paper.

Make crust: Divide the tube of almond paste into 4 equal pieces.   Lightly dust work surface or a piece of parchment paper with flour.  Working with one piece at a time, press the almond paste down with your palm to flatten.  Lightly dust a rolling pin and roll almond paste out into a 6-inch round, about 1/8 inch thick.  Set onto the lined baking sheets (2 per sheet).

Prepare blueberries: Toss the blueberries together with the sugar, lemon juice, and cornstarch to combine.  Set aside.

Make filling: Crack the egg into a small bowl and beat lightly.  Remove half to another small bowl and mix in 1 1/2 teaspoons water to make an egg wash; set aside.  In a medium-size bowl, combine the remaining half of the egg, the cream cheese, sugar, flour, and vanilla together using a wooden spoon or hand mixer until mixture is smooth.

To make crostatas, spread about 2 tablespoons of the cream cheese filling evenly around the center of each crust, leaving a 1/2 inch border all around.  Divide the blueberries among the crostatas, placing them on top of the cream cheese filling.  Fold the border of the almond paste crust over the edge of the berries, pressing down lightly where necessary to secure it in place.  Using a pastry brush, lightly brush the edges of the crostata with the egg wash and sprinkle each with turbinado sugar.

Bake until crostatas are golden brown, about 20 minutes, rotating the baking sheets halfway through the baking time.  Remove from the oven and let cool before serving.