I've made it a point to slow down and enjoy the holidays.  For me, that means being selective about what I choose to take on, keeping my schedule light, getting things done in advance, and just taking the time to sit down and enjoy the season. 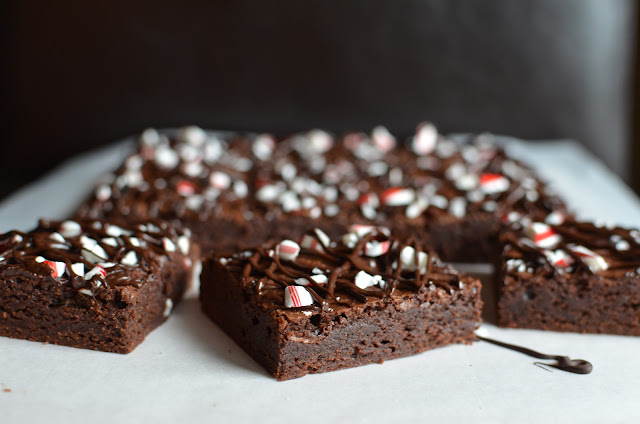 There's plenty of cooking and baking (let's not forget eating) involved at this time of year and I enjoy it immensely.  But in an effort to not go crazy or wipe myself out in the name of the holiday season, I've reined in my holiday baking.  I didn't want to look at my Christmas baking list (yes, I have one) like they were must-do's that I had to fit into my schedule.  Instead, I cut it down into a short list of want-to-do's, a handful of recipes that really appealed to me - things I think my family and I will enjoy - so I could also focus on making old favorites.  While there is always room for something new, I want to keep some traditions at Christmastime. 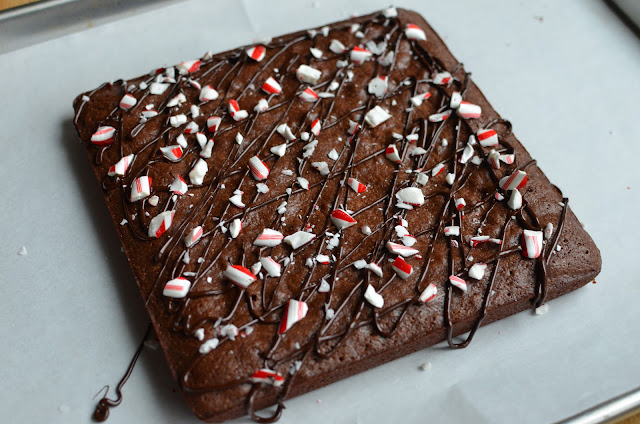 Well, these peppermint brownies were not part of the plan but they made it into my December baking rotation and I'm so glad it did!  It started when I saw these brownies and the look of the chocolate drizzle and crushed candy canes really drew me in.  I suppose I've just got peppermint on the brain come December and, well, brownies are one of the simplest dessert comfort foods that I crave (to make and eat) often.  So since I couldn't stop thinking about peppermint brownies and since brownies are generally easy/no-major-equipment-required affairs, I went for it.

I was feeling a bit adventurous because instead of following that recipe for the brownies I saw, I did a little spin-off of several recipes, though I kept that original candy cane and chocolate topping that I liked so much.  For my version, I also called on the brownie recipes from Baked, Smitten Kitchen's favorite based on unsweetened chocolate, as well as Pioneer Woman's mint brownie bites, which has melted Andes Mints in it! 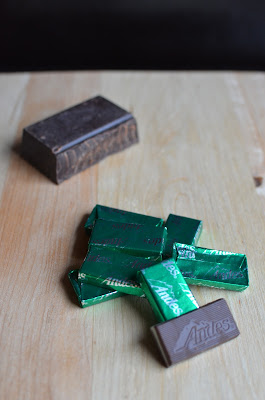 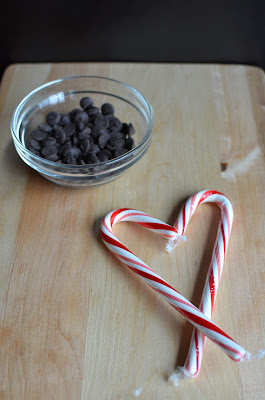 I started with the Baked brownie recipe in mind because I adore the fudgy texture of those brownies but things got really side-tracked from there.  I decided to omit the brown sugar used in the Baked recipe so that the chocolate flavor could come through more.  Along that thought, I went with unsweetened chocolate (what both the Smitten Kitchen and Pioneer Woman recipes use) for deep chocolate flavor.  I had intended to only add peppermint extract for the mint flavoring but couldn't resist the idea of melted Andes Mints!  I have to admit I have them in the house all year round in a candy dish. 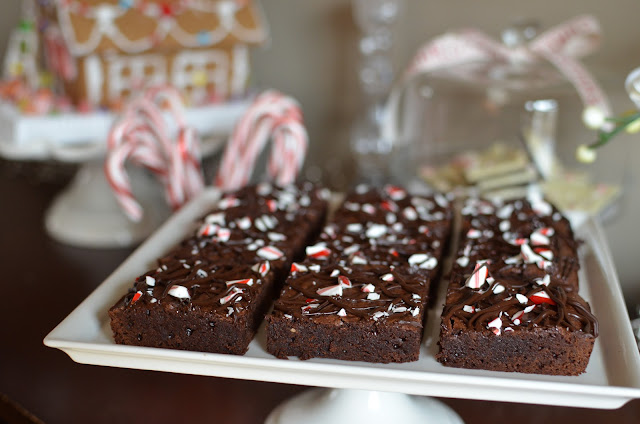 The brownies turned out to be a real hit!  I know it's hard to go wrong with brownies in general but these were moist and had a nice balance of chocolate and clear peppermint flavor.  The Andes Mints really add minty flavor to the brownies themselves while the unsweetened chocolate rounds it out and makes them a bit more serious and less sweet.  The dark chocolate and crushed candy cane on top make them look festive for the holidays and accentuate the flavors going on. 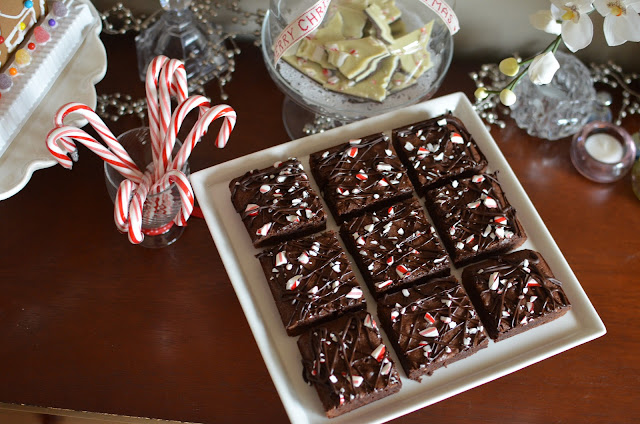 My seven year old loved these, which makes me really happy!  I intended to pack up the majority of these brownies as a gift and he protested and actually asked me to make more "because they're so good!".  I'm not bragging; I just couldn't believe how much he liked them because I think he's been on a bit of a chocolate overload lately (gotten picky with his selection) since I bake so often.  I think the peppermint flavor really appeals to him (the boy can down a large candy cane in minutes) and kids seem to appreciate brownies with a little frosting or topping on them.  Either way, I felt like I hit a home run or scored a winning goal with this one, and it was a pleasant surprise.

Apologies for the wordy title for these brownies.  There are so many peppermint brownie recipes out there that I wanted to try and describe them as they really are in this case.

When I was thinking about whether or not to whip these up, I knew I had to when I looked in my pantry and saw that I had exactly 2 ounces of unsweetened chocolate left and 8 Andes Mints in my candy dish (that was the number I was going with since I was roughly following the Pioneer Woman's brownie bite recipe; it comes to about 1.2 ounces with 8 mints).  But as I suspected, I later found another unopened box of Andes Mints when I dug a little deeper into the pantry! 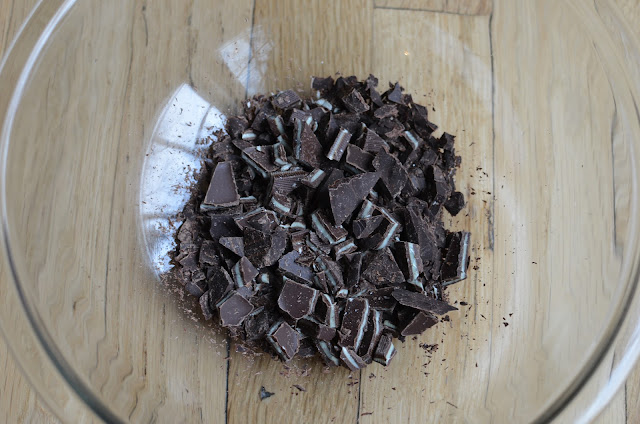 This recipe is simple, with mostly just whisking and stirring involved like with these brownies.  You melt a stick of butter with the chocolate, add eggs, the extracts, then stir in the dry ingredients. 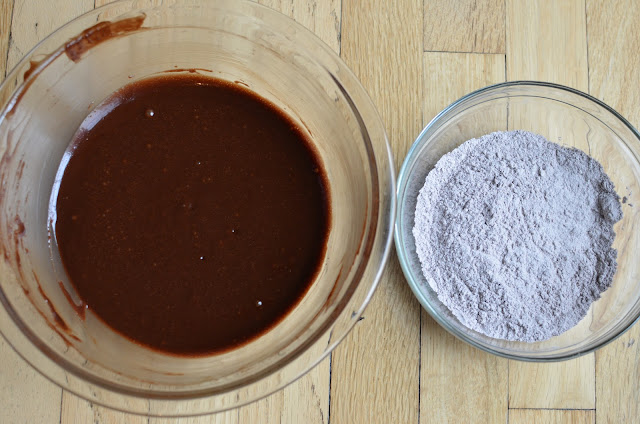 Once the brownie was baked and cooled, I had a lot of fun applying the topping.  I love playing with chocolate!  I melted 2 ounces of bittersweet chocolate in the microwave (I recently bought Callebaut callets, which are like chips except they melt better, and they're working out really well) and crushed one large candy cane.  Crush the candy in a sandwich bag; don't crush them too finely since you don't want candy cane "sand" but larger bits that will look nice on top of your brownie. 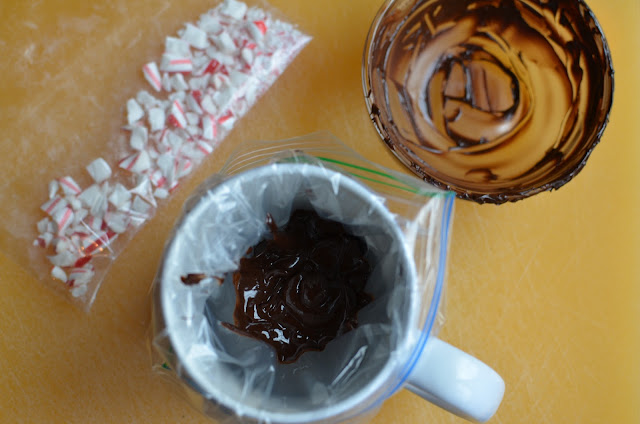 Transfer the melted chocolate to a sandwich bag (setting the bag in a mug makes the job easy), snip off the corner to make an opening, and get drizzling!  Drape half of it over the surface, add the candy cane pieces, and then drizzle the rest of the chocolate over that. 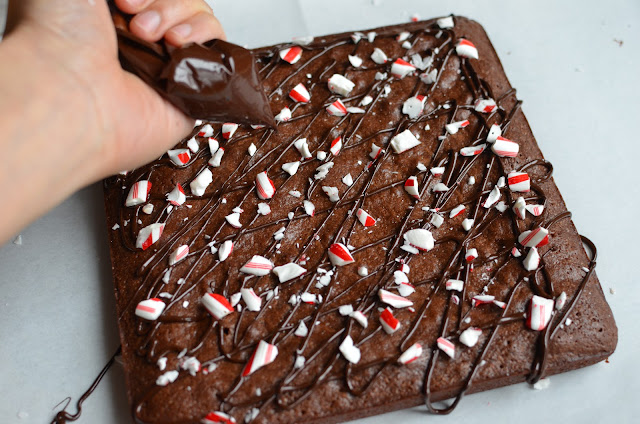 Just go a little crazy with that chocolate - it's okay!  I love the look of all that chocolate on top, mixed with the bits of red.  It takes about half an hour for the chocolate to set and you can cut the brownie into pieces. 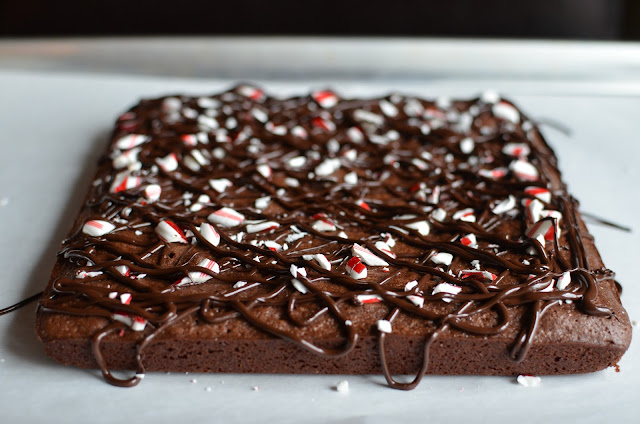 If you like peppermint and brownies, I recommend doubling the recipe and baking it in a 9x13 inch baking pan.  I made this batch in an 8-inch square pan, cutting the brownies into 9 pieces.  I used a warm knife, cleaning and drying the knife in between each cut.  If I made a larger batch, I'd be tempted to trim the edges and go for "center-cuts".  My husband and I have really been into the moist, soft, fudgy brownie centers lately! 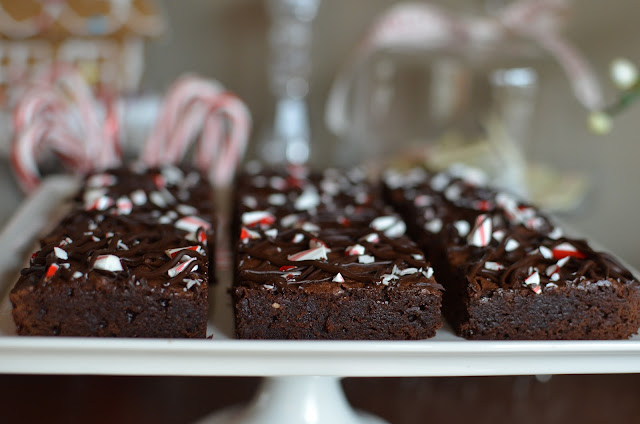 Chocolate and mint are a harmonious union, perfect for the holidays!

In a bowl, whisk together the flour, cocoa powder and salt.


Place chocolate, butter, and instant espresso powder (if using) in a bowl set over a pan of just simmering water.  Stir occasionally until chocolate and butter are melted.  Remove the bowl from the heat and add the sugar, whisking until combined.


Let chocolate mixture cool slightly to room temperature, then add eggs and whisk until combined.  Add vanilla and peppermint extracts.  (Do not overbeat the mixture at this point.)


Sprinkle dry ingredients over the mixture and fold together using a rubber spatula until just combined.

Pour batter into prepared pan, smoothing out the top.  Bake for 20-25 minutes, or until a toothpick inserted into the brownies comes out with some moist crumbs attached, rotating the pan midway through.

Let brownies cool about 20 minutes before removing with the parchment overhang and placing on wire rack to cool completely.

Put melted chocolate in a resealable plastic bag, snip off a small corner tip, and drizzle half of it over the brownie. Sprinkle with candies and drizzle the remaining chocolate on top.  Let cool until chocolate sets, about 30 minutes, then cut brownie into squares.  I cut mine into 9 squares using a warm chef's knife, cleaned under hot running water and dried in between cuts.


* If you want to omit the Andes Mints, you could try using 3 ounces of unsweetened chocolate along with 1/2 teaspoon peppermint extract.  Increase sugar to 1 1/4 cups.


- Because of the candy cane topping, I would not recommend refrigerating the brownies after the candy cane pieces have been added.  In my experience, the candy tends to melt when refrigerated/covered in the fridge (I think it's more the covering that causes the candy to melt).  I stored my brownies in an airtight container, in a relatively cool room.  There was a little bit of candy cane "meltage" by day 2 but not a lot but if you are concerned about this...

- Consider baking the brownies the day or night before, wrapping it tightly in the pan once fully cooled, and applying the chocolate and candy topping the next day or when you're nearly ready to serve.