This cake came about because of some leftover Pirouette rolled wafers that I wanted to eat/use up.  I did a little mixing and matching, taking my favorite chocolate cake (again) and instead of using the usual buttercream, layered it with a fudgy chocolate frosting that's made its appearance elsewhere before.  Like mixing things up in your wardrobe, it's fun to play with combinations in the kitchen while still sticking with the things you know and love. 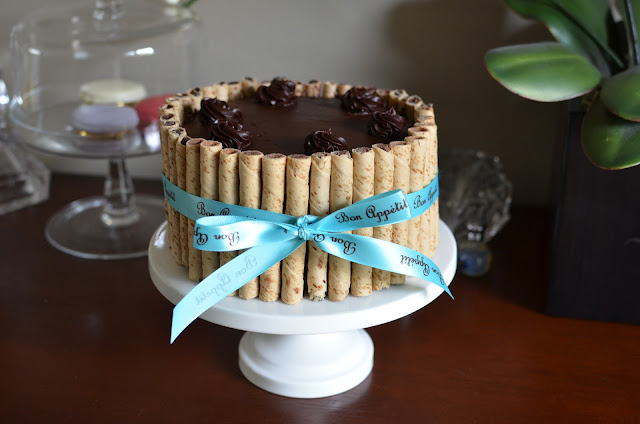 Do you like these crispy wafers?  My husband and I do, and I tend to buy them around Christmas time (hence, the leftovers and impending expiration date).  Aside from Christmas, they always make me think of ice cream cake.  Specifically, the Haagen Dazs "ribbon" ice cream cake, flanked all-around with these wafers, that we always had whenever we celebrated someone's birthday at work back in the day.  My nephew recently had one of these cakes for his 9th birthday and it brought me back since I hadn't had one in years!  I used to always take the wafers off to munch first and notice the bits of fudge used to "glue" the wafers to the ice cream cake.  Maybe that's what made me think fudge frosting for this cake... 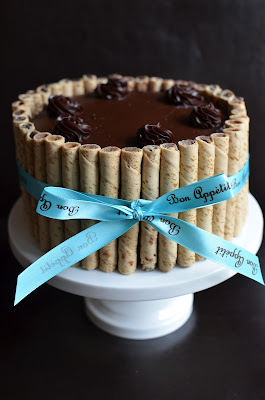 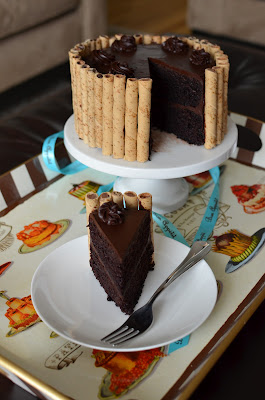 I noticed that Haagen Dazs says it uses "pirouline" wafers for their ribbon cake.  I am using "pirouette" but I figure it's a bit like "you say tomato, I say tomahto" - they're essentially the same thing.  And confession time: I actually didn't have enough leftover pirouette wafers to surround my cake (who knew it takes over 40 of them to cover a 6-inch cake!) but by the time I realized that, I'd already had my heart set on making it.  Maybe it was meant to be because I did have more leftovers of another similar wafer that are just a bit thinner and shorter (I overstocked during Christmas) so I made due by trimming the pirouettes and I hope you'll pretend not to notice the disparity too much. 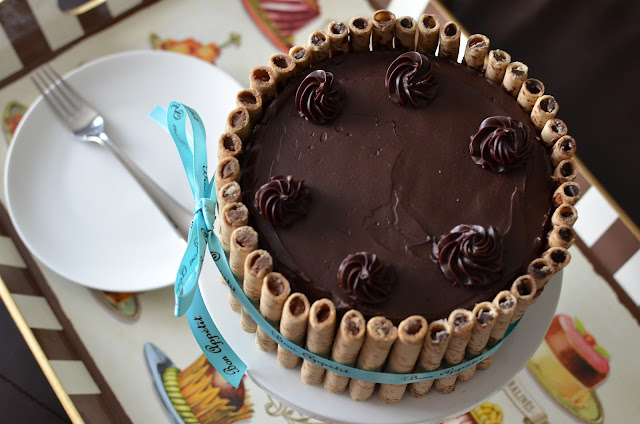 It's always fun and satisfying to get into the kitchen to make a cake, even in these extremely hot summer days.  And in this case, I was working with some of my favorite components so I knew the result would be enjoyable.  I love this kind of dark, fudgy, ganache frosting above all other kinds. 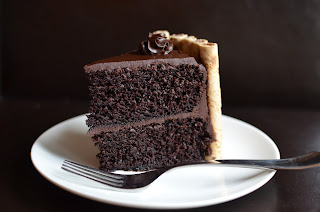 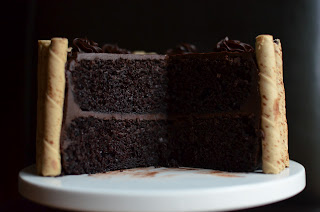 But I'm not particularly good at decorating or making things pretty; it usually requires more patience than I have to do it right (I get kind of cross-eyed and dizzy because boy, it always takes a lot more time and concentration than you figure!) and I'm more into taste than design.  So you might notice my wafers are a little uneven and far from perfect but it's amazing what a nice ribbon will do.  I tied a pretty ribbon around the cake and we have my little homage to that Haagen Dazs ribbon cake (pretty ingenious name, I think). 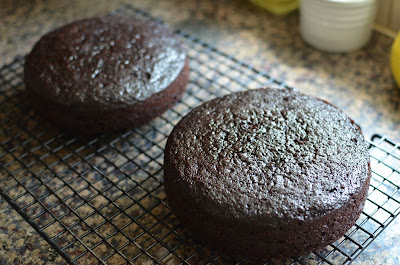 The chocolate cake is essentially my favorite when it comes to an authentic, old-fashioned chocolate layer cake.  It's so moist and full of chocolate flavor thanks to a combination of buttermilk, cocoa, and coffee.  The original recipe makes two 8 or 9-inch cakes.  When making two 6-inch cakes, I divide the recipe in half.  To make things easier, I've written the downsized recipe in the recipe section of this post.
More details and pictures on making this cake can be found here.

For this cake, I used a slightly modified version (recipe at the end) of the fudgy frosting that covers the Brooklyn Blackout Cake.  It's essentially a ganache frosting though instead of cream, it's made with butter and some water.  In contrast to the buttercream frosting that's originally paired with this cake, this frosting is darker, denser, more intensely chocolate versus the buttercream, which is softer and creamier in texture. 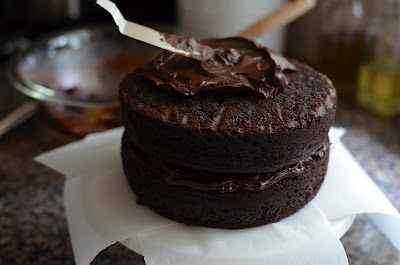 I really love how this shiny (thanks to the butter) dark frosting mimics the chocolate coating on the Haagen Dazs ribbon ice cream cake.  It didn't really need it but when I put some of the frosting on one of the wafer cookies before sticking them on to the side of the cake, it looked just the way they did when I used to pull them off the ice cream cake to munch on. 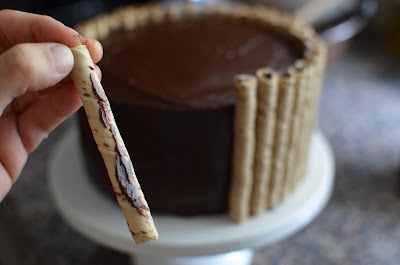 
Many times, when I make a homemade version of something I've eaten at a restaurant or purchased at a bakery, I realize why things are so expensive!  Granted, the pros have perfected their methods, maybe some of the steps are done by machine, but when you try it at home, you often realize and come to appreciate the amount of work and material involved.

For instance, it takes 40-42 pirouette wafers to surround a mere 6-inch cake.  I approximate because while I needed 42 wafers for my cake, I used two kinds of wafers, the second of which were somewhat thinner than the pirouettes.  On top of that, I realize that the ideal height of the wafers for my cake was right around 3 1/4 to 3 1/2 inches so I trimmed the wafers as well (use the center of a sharp chef's knife to chop them evenly).  You can save the scrap bits of wafers in the freezer to serve with ice cream. 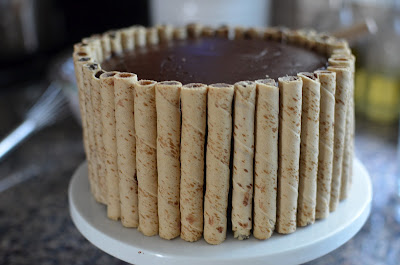 And now here's the thing.  I'm going to let you in on a little secret.  Remember I said I ran out of pirouettes (because who knew you needed so many) but I had the second kind?  That was true enough but even with both of them, I was still short a few wafers!!  So, forgive me but...I cheated a bit, as you can see below! 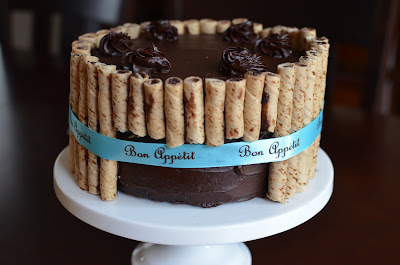 Not very professional but the cake was for our own enjoyment, not to be given to anyone or presented in any way so it's alright.  There was just no way I was going to invest in more pirouettes that I didn't need since the whole original purpose of this project was to use up my leftovers!  And the good news is I've now used up all these wafers and will be mindful of how much I buy this coming Christmas.

And aside from giving the cake an interesting look, these wafers do add a nice crunchy element to the cake.  I always thought these wafers might be nice chopped up and layered over some soft chocolate buttercream or mousse as part of a cake but that may be a project for another day...

- Two 6-inch cakes (this is half the original recipe) -


Preheat oven to 350 degrees.  Butter two 6" round cake pans.  Line bottoms with rounds of parchment paper, then butter and flour the pans, tapping out the excess flour.  (Alternatively, use a cooking spray designed for baking in place of the butter/flour).

Sift the flour, sugar, cocoa, baking soda, baking powder, and salt into the bowl of a stand mixer fitted with the paddle attachment.  Mix on low until ingredients are combined.  In another bowl, mix together the buttermilk, oil, eggs, and vanilla.  With the mixer on low, slowly add the wet ingredients to the dry.  Continuing on low speed, add the hot coffee and stir until just combined, scraping the bottom and sides of the bowl with a rubber spatula.

Divide the batter evenly into the prepared pans and bake for approximately 30 minutes, until a cake tester inserted into the center of the cake comes out clean.  Cool in pans for 30 minutes, then turn the cakes out onto a cooling rack to cool completely before frosting.

To frost, place one layer, flat side up, on a flat plate or cake pedestal.  Tuck pieces of parchment or wax paper about an inch under the cake to keep the plate clean.  Spread the top with frosting with an offset spatula.  Place second layer, rounded side up, and spread frosting evenly over the top and sides of the cake.  Remove parchment or wax paper.

- Enough to frost this two-layer 6-inch cake; Double the recipe for an 8 or 9-inch cake -


Place chocolate and butter into a heatproof bowl set over a pan of barely simmering water.  Stir until melted and combined before removing from the pan and letting cool slightly.

Add the lukewarm water and gently whisk together.  It will thicken a bit once the water is added.  Stir in the corn syrup.  Let frosting sit until thickened enough to spread on the cooled cakes.  This may take roughly 30 minutes.  If necessary (particularly when the temperature is hot), place the mixture in the refrigerator to speed up the process.

Frost the chocolate cake with the fudge frosting.  I reserved a little bit of the frosting to pipe a simple decoration over the top, using a closed star tip (Ateco #30).

Immediately after frosting the cake (before the frosting hardens), gently press the pirouette wafers around the sides of the cake.  Tie the cake with a ribbon of your choice.