Chalk this one under "very cool things you can make easily at home."

Crème fraîche is probably best - or most often - described as the French version of sour cream.  I think it actually looks more like cream cheese when you first take it out of the refrigerator but stir it up and you'll see it's smooth and creamy in texture, with a slight tang to it when it comes to taste.  Similar to heavy cream, you can whip crème fraîche to soft peaks and use it as an accompaniment with dessert like, say, over a wedge of chocolate cake.  It is often used in French recipes for cakes and tarts. 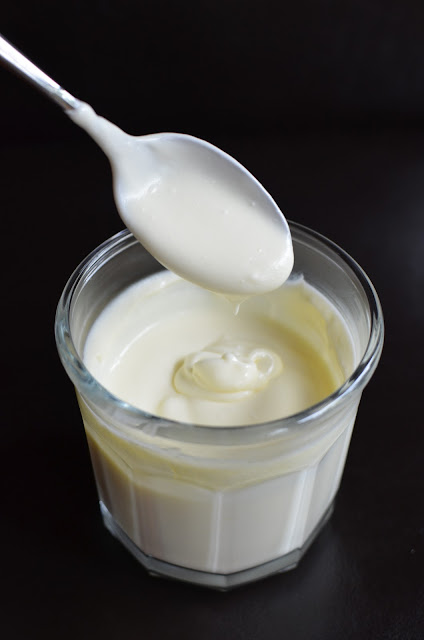 Crème fraîche can be hard to find and rather expensive.  I was looking to make a recipe that calls for it recently and couldn't decide whether it was worth the trouble of buying the crème fraîche.  Then, I looked further into the cookbook and read the instructions on making it at home.

It takes 2 ingredients: heavy cream and yogurt (or buttermilk).  Now, I don't know about you but I don't usually have heavy cream and buttermilk or yogurt in the house at the same time so while it is very easy to make, I can't say it's something I could whip up whenever I needed it.  But honest to goodness, the stars were aligned when I needed some crème fraîche the other week.  I had yogurt and one cup of cream leftover in the fridge.  So you take a tablespoon of yogurt, stir or shake it up with the heavy cream, let it sit for somewhere between 12 to 36 hours, and you have crème fraîche.  It keeps in the refrigerator for about 2 weeks. 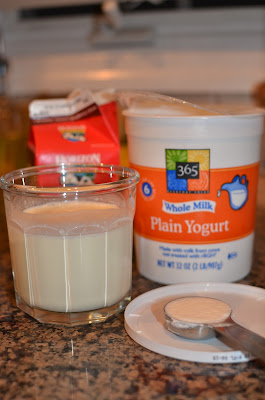 Ideally, put the heavy cream into a jar with a tight fitting lid so you can shake the two ingredients up.  I added the yogurt to the heavy cream and stirred it vigorously with a spoon for about a minute and it worked just fine.  After the two ingredients have been thoroughly mixed together, let it sit on the counter for somewhere between 12 to 36 hours until slightly thickened (the warmer the room, the quicker it thickens). 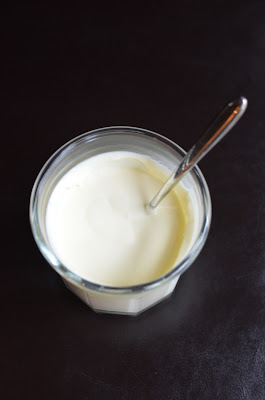 Now the instructions in my cookbook didn't specify whether to cover the container or not as it sits but from what I could gather online, it seems most agree that you should keep it uncovered or just partially covered.  I covered it the first day and when it didn't seem to thicken much, I left it partially covered and that sped the process right up so I'd recommend doing the same.  Once the crème fraîche has thickened, chill it in the refrigerator for a day before using.  It can be kept in the fridge for roughly 2 weeks; it becomes tangier the longer it sits in the fridge. 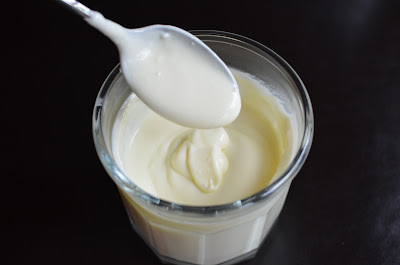 Place heavy cream into a jar or glass container.  Add yogurt or buttermilk.  Cover the jar with a lid and shake for about one minute, or stir vigorously for the same amount of time.

Cover the jar partially with plastic wrap and let it sit on the counter for somewhere between 12 to 36 hours until slightly thickened.  The warmer the room, the faster it will thicken.  Once the crème fraîche has thickened, cover and chill in the refrigerator for one day before using.  You can store it in the refrigerator for about 2 weeks; it gets tangier the longer it's "aged."