Today, March 20th, 2012, is not only the first day of Spring but also Macaron Day in NYC.  I admit that I am far too lazy to participate in the actual event but I'm celebrating the occasion here with another macaron post.

This time, my French macaron-making continues with some pistachio macarons.  I'm really getting the hang of it.  I'm no longer slightly nervous about the prospect of making these.  Instead, I feel calm and ready, and the process is beginning to have a familiar rhythm to it.  So after successfully tackling the coffee and hazelnut flavors, I made pistachio ones.  I placed a few of them (below) in a gift box that I got from Ladurée, the iconic macaron maker.  I sometimes hold on to boxes as a memento.  It goes without saying that mine are no where near as good as theirs (that's laughable) but a girl can pretend. 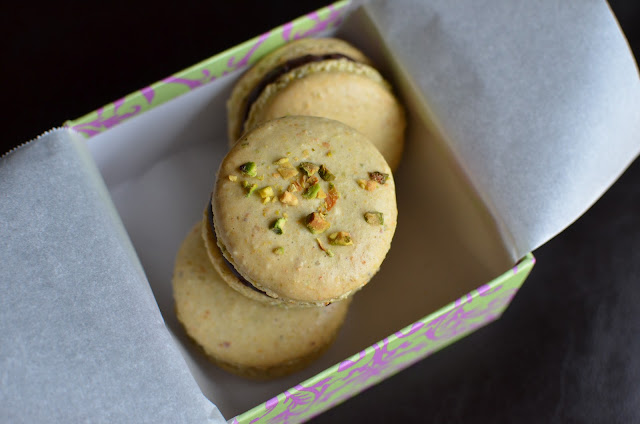 The beauty of making macarons is you can essentially use one main recipe that works for you and tweak it for various flavors.  With pistachio, I used an equal mix of ground pistachios and almonds in the batter.  You can't really tell but I did use some food coloring (first time with macarons) to tint them a little green.  That was the intention but if there's one thing that does turn me off about macarons is when they have an artificially intense, almost neon-like, color to them.  So I tried to avoid that at all cost.  You can see the tinge of green in the wet batter but after baking, the color is more golden.  I could've used more of my green gel paste coloring but I'm satisfied with the results.  You really don't need to color them at all. 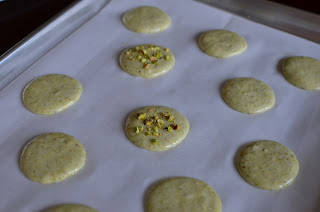 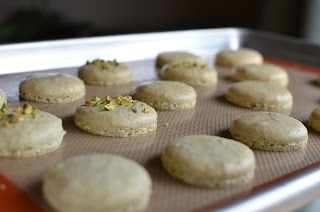 In "real life," the macaron shells already have a subtle, natural tinge of green to them from the ground pistachios and you can see little specks of it on the surface.  Sprinkling some chopped pistachios on top of some of the shells is an easy garnish to show what they are.  Plus, it adds a bit of flavor. 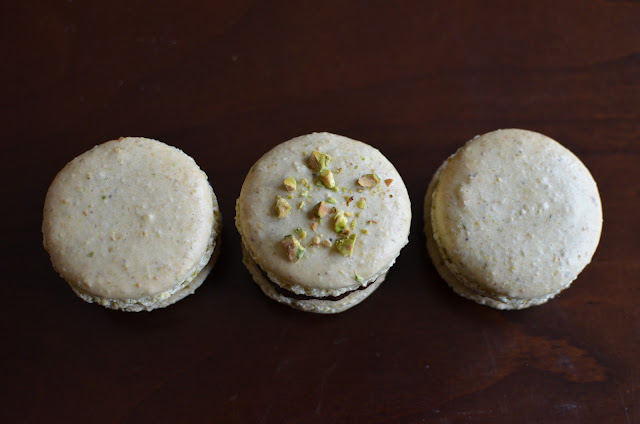 I've mentioned before that I've decided to pair macarons I make with chocolate ganache.  That's because I love chocolate and I'm not generally a fan of buttercream.  Plus, I just don't have the skill to pull off a really good buttercream like the professional ones that blend so seamlessly with the shells. 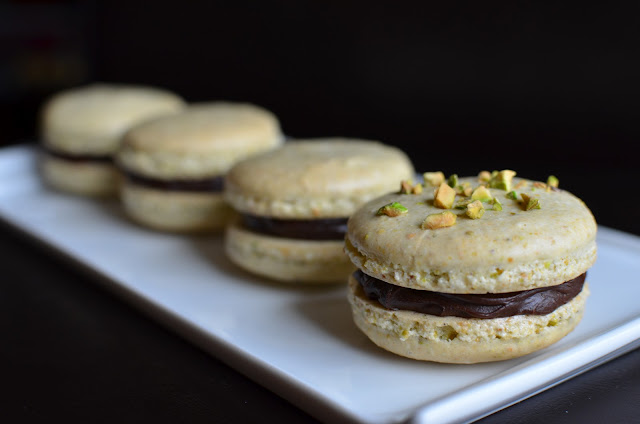 However, here's the thing about macarons.  Their flavor comes heavily from the filling.  I mean, we're really talking about a meringue cookie here so the overwhelming flavor coming from the macaron shells is sweetness - or sugar.  That's particularly the case if you're using pure almonds, which is rather mild.  The nuts (in this case, pistachios) do impart a distinct flavor but the filling can really go a long way towards underscoring and heightening the flavor or add something special if you want to get really creative.  I used semisweet chocolate for the ganache and added a light layer of filling so as not to completely overwhelm the pistachio shells.  But we love chocolate, period, so this works beautifully for us. 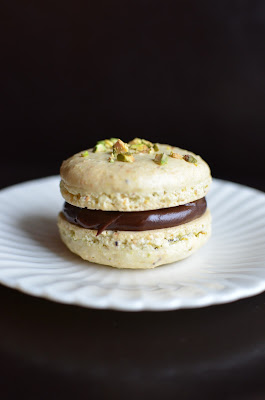 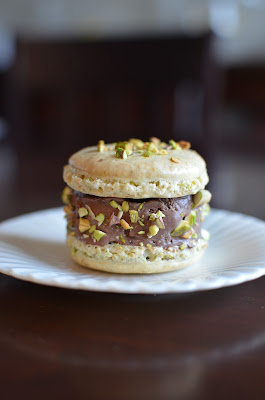 My son devoured that "macaron ice-cream sandwich" I made last time so I did play around again this time.  His had vanilla ice-cream (there is one particular brand of vanilla ice-cream he favors; otherwise, it's chocolate everything).  My husband and I shared the chocolate one you see above.  Since realizing macaron shells freeze well, I'm experimenting with it and have a couple in the freezer that I plan to defrost and use at a later date.  I'll let you know how that works out...


To make these pistachio macarons, I started with a mix (55 grams each) of roasted, unsalted pistachio nuts and blanched slivered almonds in a food processor. 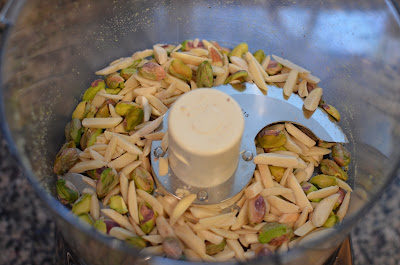 Add 200 grams of powdered sugar and grind very well in the food processor before passing the mixture through a medium coarse sieve.  If you have a lot of large lumps remaining at the bottom of your sieve, put it back into the food processor and process again until you get as much as you can through.  I usually only have to do this once or twice but with the pistachios, I found myself repeating the process several times. 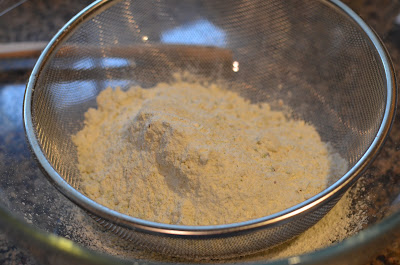 Once the dry ingredients are ready, the other part is whipping the egg whites.  Using a stand mixer, whip the whites until it starts to form.  Then, slowly add 30 grams of granulated sugar until the whites are stiff and glossy.  If you're using gel paste food coloring like I did in this instance, add it just before the whites are done.  As I mentioned, I used very little because I didn't want to end up with "Shrek" color macarons.  I literally swiped a tiny amount of the coloring onto the whites.  Next time, I might use a little more but better safe than sorry... 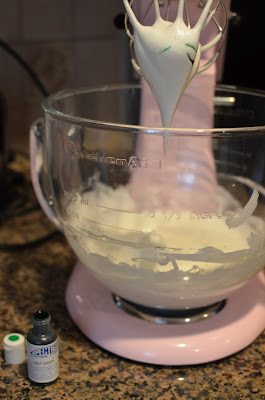 Then comes the time to combine the dry mixture into the beaten egg whites.  Add the dry mixture into the whites, give it a couple of quick stirs to break things up.  Then, gently fold together.  It should not take more than 50 strokes, as I've learned and realized through practice.  It's best to scoop a little out onto a plate.  When the tip flattens onto itself, it's ready. 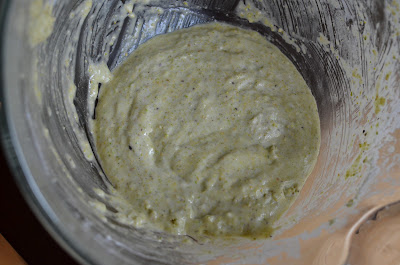 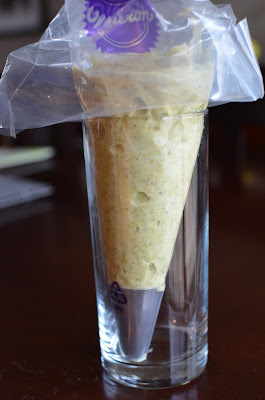 Pipe small rounds (1 1/2 is the standard but I tend to go a bit larger) onto parchment or silpat lined baking sheets.  Rap the sheets on the counter a few times and sprinkle with some chopped pistachios, if desired. 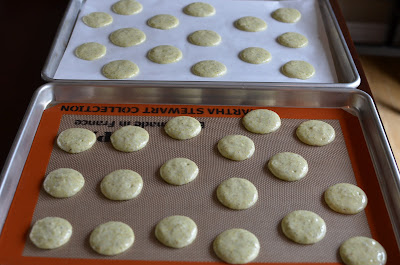 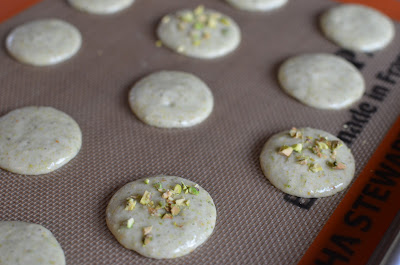 Let the macaron shells sit for about 20-30 minutes so that the surface of the shells dry a bit.  Preheat the oven to 400 degrees but turn it down to 300 degrees right before the macarons go in.  Bake for about 15-20 minutes.  Let cool before removing. 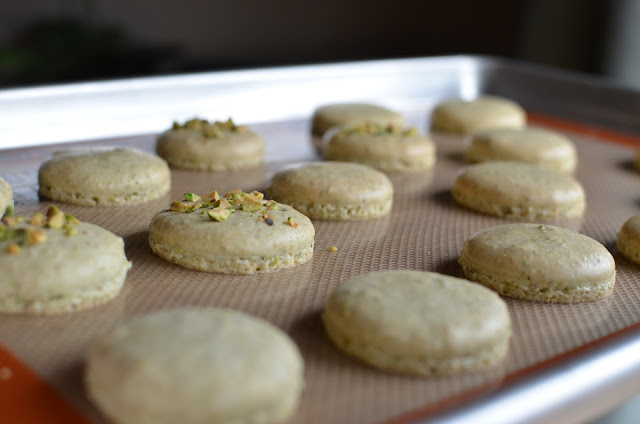 It is so satisfying to peek into the oven and see "feet" on your macarons!  And note to self: it's time to invest in another silpat.  Once again, the macarons baked on the silpat just slipped right off the sheet.  This time, the ones on the parchment came off rather easily but not quite as seamlessly.  Also, the ones on the parchment seemed to have "feet" that expanded outward slightly (don't like that).  This could be a result of the oven being too hot and the macarons on parchment paper sitting in more direct contact with the metal sheet pan.﻿

I made a batch of chocolate ganache, using semisweet chocolate, for the filling. 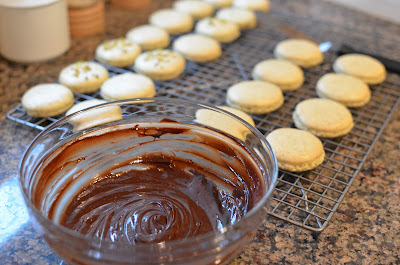 I didn't fill the shells with too much chocolate filling so as not to completely overwhelm the pistachio flavor. 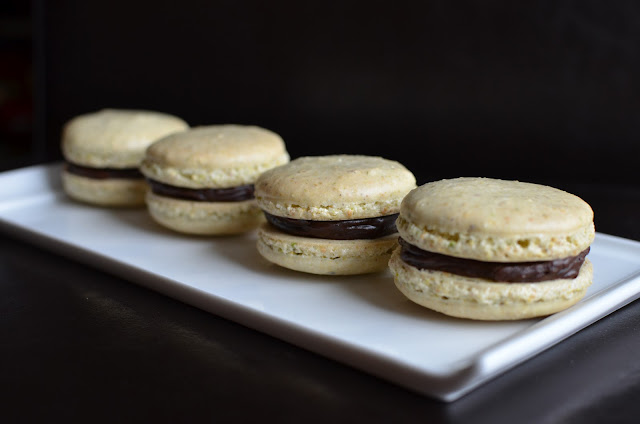 These macarons were delicious!  I like to save a few macaron shells to eat all by themselves.  And the shells are great as a little decoration for a bowl of ice-cream too!  For me, the magic of the macarons is in the texture.  The crisp top that practically shatters and then the delectable chewiness within.  It's a wonderful treat! 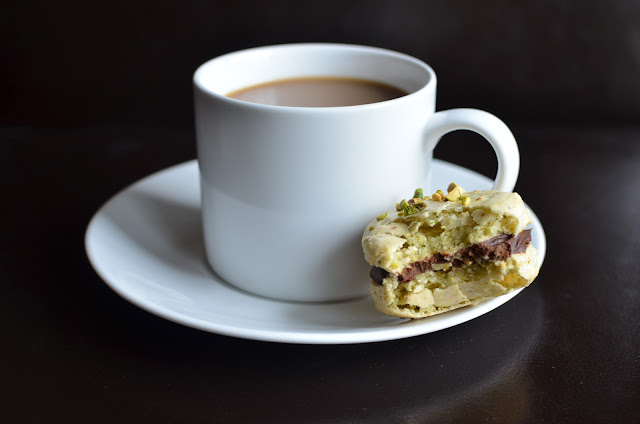 Pistachio Macarons with Ganache Filling
Recipe for macaron shells adapted from Tartelette (I've incorporated techniques I learned in other places and this is what worked for me); Ganache recipe from David Lebovitz

Grind the pistachios, almonds, and confectioners' sugar in a food processor until the nuts are finely ground and it looks like fine powder.  Pass the mixture through a medium-coarse sieve.  If there are large lumps remaining at the bottom of the sieve, place them back in the food processor and repeat.

In the stand mixer fitted with the whisk attachment, whip the egg whites to a foam.  Then gradually add the granulated sugar until you get a stiff, glossy meringue.  If using food coloring, add a small amount right before the egg whites reach stiff peaks and beat in.  Do not overbeat the meringue or it will be too dry and the macarons won't work.

Fill the batter into a pastry bag fitted with a plain tip that has about a 1/2 inch opening (I use Ateco #807).  Pipe 1 1/2 inch (or size you prefer) rounds onto parchment or silpat lined baking sheets at least an inch apart.  If using, sprinkle chopped pistachios on top of half or all of the macaron shells, accoring to your preference.  Rap the sheets 2-3 times firmly on the counter.  Let the macarons sit for about 20-30 minutes until the surface of the shells are slightly dry.

When fully cooled, spread ganache onto one macaron shell and sandwich with another.  Many people say macarons taste better with a little rest in the refrigerator.  Store them in an airtight container in the refrigerator for several days and bring them up to room temperature before eating.