The guys behind Baked are known for their creative and delicious spins on some classic American desserts.  I don't know who grew up eating these peanut butter crispy bars but I was not lucky enough to be one of those people.  I may be more of a Nutella person in general but very often, a peanut butter sandwich just hits the spot.  I think the Baked cookbooks have given me a new appreciation for peanut butter (I'm thinking about their very yummy monster cookies). 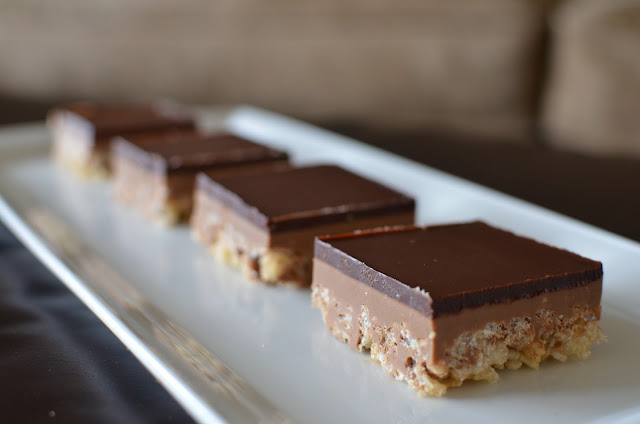 These peanut butter crispy bars are another recipe from their cookbook.  The bars are made up of three layers: a crispy, basically candied, rice crispy crust at the bottom, a prominent middle layer of soft peanut butter and milk chocolate, and a thinner coating of dark chocolate on top.  I love the way these bars look, the contrast in colors between the chocolate layers, as well as the textural difference between the crispy bottom and the other two creamy layers. 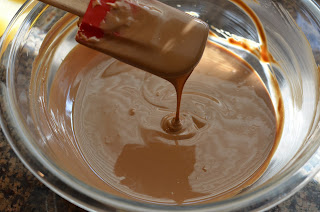 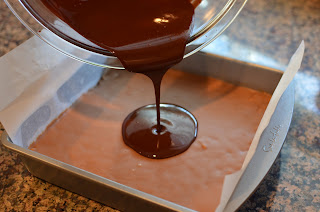 These bars were easy to make and come together relatively quickly.  There's no baking involved and the two chocolate layers only need about an hour of chilling time apiece.  I think the only technicality is you should have a candy thermometer since you need to boil some sugar for the bottom crust.  Since I had everything on hand, I literally made these on a whim one morning, went out to run an errand, and they were ready to be sliced.  I cut these into small servings and gave the majority away so I could share the calories (I mean, love) among friends.

You know how you know you made something good?  You keep thinking about it and wanting more, as thought you're not convinced you've got a proper taste and need to make sure.  That's how we feel about these.  I have a feeling I'll be making more of these.  And while I'm tempted to play around with say a Nutella version and sometimes I think maybe, just maybe, the bottom layer would be better if it was just a tad softer and not quite so crunchy, it's hard to mess with a good thing.  And these are good! 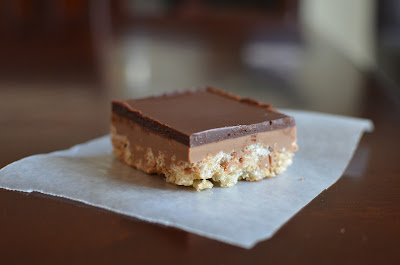 Consider trying these out if you know some peanut butter lovers and want to mix up the usual cookie rotation.  I think it's hard to find this kind of distinct, multi-layer bar recipe.  My six-year old tasted these and started placing dibs on what we had left and my husband could've used a few more pieces as well.  You see why I keep thinking I need to mix up another batch?  The writing's on the wall...

This peanut butter crispy bar recipe comes from the cookbook, Baked: New Frontiers in Baking.  I know many people have made these from the popular cookbook and I'm glad to join the bandwagon.  It might come as something of a surprise to see that you make these in an 8 by 8 inch pan instead of something larger.  Well, these bars are real "treats" and definitely an indulgence so they're best enjoyed in moderation but with as much enthusiasm as you can muster.

The recipe instructs you to rub nonstick cooking spray around the baking pan but I choose to grease it and line it with a piece of parchment with a bit of overhang on two sides.  I highly recommend this.  When the bars are done, all you have to do is gently pull them up, away from the pan, and you can slice away easily without any damage to your pan. 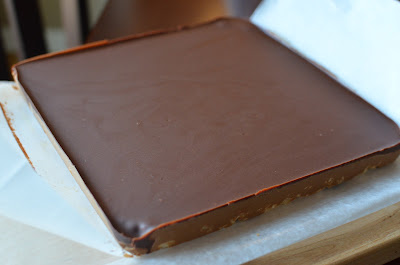 The first layer to work on is the crispy crust.  It's not simply rice crispies (or any "crisped rice cereal" you use) and there are no marshmallows in sight.  What you do is coat and sweeten the rice cereal with a mixture of sugar and corn syrup that's been boiled with water, then mixed with butter.  See what I mean about indulgent?

Because you're working with a very small quantity, it helps to have a teeny butter-warmer type saucepan.  Since I don't have one of those, I used my teeny skillet and tilted the mixture to the side for more depth when testing it with a candy thermometer.  Place 1 3/4 cups of crisped rice cereal into a large heatproof bowl and set it nearby.  Put 1/4 cup of water in a small pan.  Very gently add 1/4 cup of sugar and 3 tablespoons light corn syrup to the water, making sure not to let any sugar or syrup get to the sides of the pan (this makes the mixture crystallize and that's not a good thing).  Then stir gently with a small wooden spoon until just combined.  I stirred it without disturbing the sides.  If possible, put a candy thermometer in the saucepan.  If not, start cooking it over medium-high heat and bring to a boil. 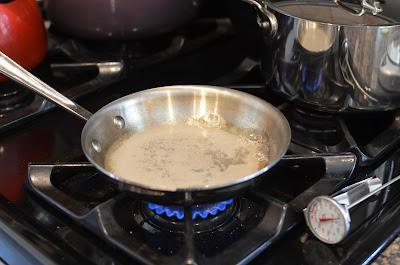 The mixture comes to a boil rather quickly but it takes a bit longer to reach soft ball stage, or 235 degrees, which is what we want.  I started tilting my pan to the side to test for this after the sugar has dissolved.  When it's done, the mixture is thickened and has a golden color.  Remove from the heat and stir in 3 tablespoons of melted butter.  Working quickly, pour this mixture into the rice cereal and stir it around to coat the cereal evenly. 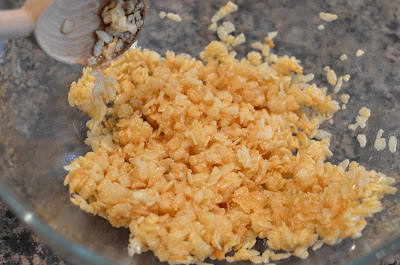 Pour the cereal into the prepared pan, pressing down firmly and evenly with clean hands to make a flat bottom layer.  With that, you've got the sweetened, crispy bottom layer of the bar done.  Set it aside to cool at room temperature while you work on to the next layer. 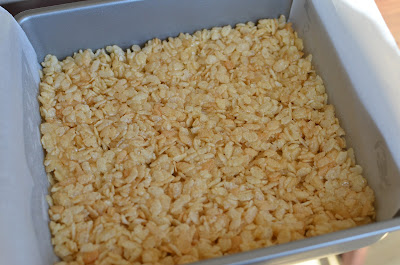 So take 5 ounces of chopped milk chocolate (good quality, obviously, since the flavor will pop through) and a cup of creamy peanut butter.  Place it in a heatproof bowl and set it over a pan of simmering water to melt and combine together. 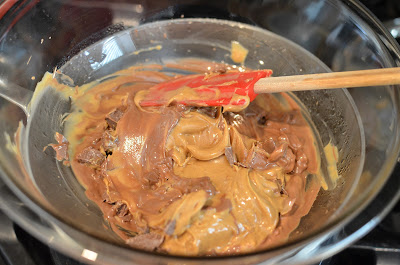 Once the mixture is smooth, take it off the pan and stir for a minute to cool it slightly.  Pour it over the now cooled crispy bottom.  Gently pick up and move the pan around a little to evenly distribute the chocolate-peanut butter mixture to the edges.  Be careful not to over-slosh it since you don't want it up the sides and interfering with the top layer.  Place the pan in the refrigerator for about 1 hour, or until the top layer hardens. 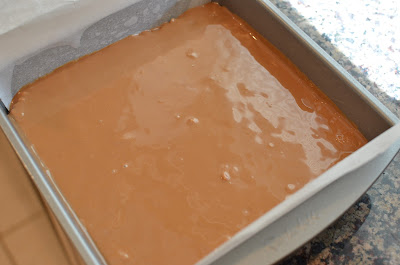 For the third layer, we make a delicious dark chocolate icing that not only looks good but gives the bars a more grown up flavor.  Take 3 ounces of dark chocolate, with 60 to 72% cacao.  I prefer to go with the higher percent cacao chocolate here to offset the thicker, sweet milk chocolate layer.  Place the chocolate, along with 1/2 teaspoon light corn syrup, and 4 tablespoons of butter in a heatproof bowl and set it over a pan of simmering water again.  Stir together with a rubber spatula until smooth.  It looks so good! 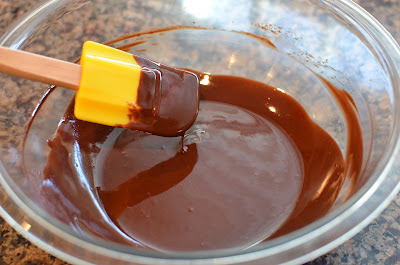 Remove the bowl from the heat, stir together for about a minute to cool it down slightly.  Then, pour this dark chocolate mixture over the chilled milk chocolate-peanut butter layer.  Again, pick it up gently and ease the dark chocolate all around the pan to distribute evenly. 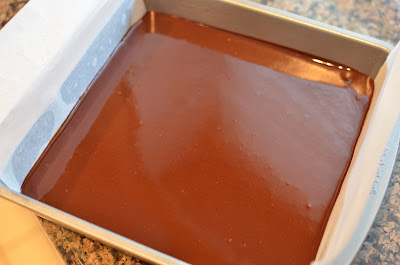 Set the pan in the refrigerator to chill again for about an hour or so, until the top layer hardens.

If you're tempted to let the pan chill overnight and cut the next day, I wouldn't.  I think it's best to cut them an hour or two after the last layer has chilled.  This way, the bottom crust isn't so hard that it shatters when you slice it.  To cut the bars, use a sharp chef's knife.  I started off with a serrated knife and it turned out to be a mistake, with the knife making unattractive groves into the dark chocolate layer (see triangle pieces below). 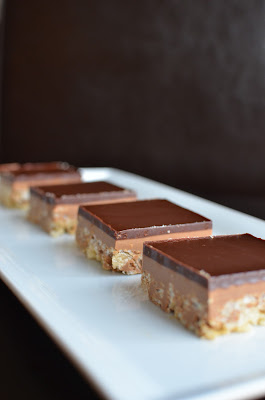 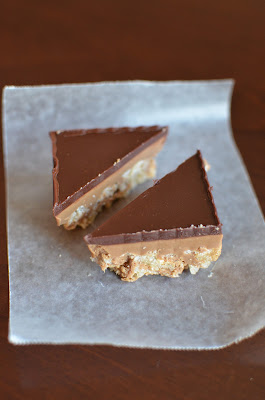 Slice these into whatever size and shape you prefer.  The recipe suggests 9 squares, which is rather generous.  I'd go with smaller servings and slice it into 16 small servings.

* The only change I've made to the original recipe is to add suggestions like lining the pan with parchment and other minor techniques I found useful.  You might notice there's no salt in the recipe, and adding a pinch probably wouldn't hurt.  I have also read suggestions where people added a dash of cream to the sugar syrup to soften the crunch but I have not tried this.

Prep: Lightly spray a paper towel with nonstick cooking spray and rub evenly around an 8-inch square baking pan.  Line the pan with a piece of parchment paper, allowing about 2 inches of overhang on two sides.  Rub the parchment paper with cooking spray.

1. The crispy crust
Place the cereal into a large bowl and set aside nearby.

Pour 1/4 cup water into a small saucepan.  Gently add sugar and corn syrup, not letting any of the sugar or syrup touch the sides of the pan.  Use a wooden spoon and gently stir the mixture until combined (again, not letting any sugar or corn syrup get to the sides of the pan).  Put a candy thermometer into the saucepan.  Cook over medium-high heat (without stirring) and bring to a boil.  Cook until the mixture reaches the soft ball stage, or 235 degrees on a candy thermometer.  (I tilted the mixture to the side once it boiled and the sugar was melted to get enough depth to gauge the temperature.)

Remove from the heat, stir in the melted butter, and pour over the cereal.  Working quickly, stir until the cereal is thoroughly coated.  Pour into the prepared pan, pressing down firmly to make an flat, even layer at the bottom of the pan.  Let the crust cool to room temperature while you make the next layer.

2. The milk chocolate-peanut butter layer
Stir the milk chocolate and peanut butter together in a heatproof bowl.  Set the bowl over a pan of simmering water and continue stirring together until the mixture is smooth and has blended together.  Remove the bowl from the pan, stir it with a rubber spatula for 30 seconds to 1 minute to cool it slightly.  Pour the mixture over the now cooled crust.  Pick the pan up and gently ease the mixture evenly around the pan.  Chill the pan in the refrigerator for about 1 hour, or until the top layer hardens.


3. The dark chocolate icing
In a heatproof bowl, add the dark chocolate, corn syrup and butter.  Set it over a pan of simmering water and cook, stirring occasionally with a rubber spatula until the mixture is completely smooth.  Remove the bowl from the heat and stir for 30 seconds to 1 minute to cool slightly.  Pour the mixture over the chilled milk chocolate-peanut butter layer.  Gently pick up the pan and ease it around to spread the dark chocolate evenly around the pan.  Put the pan into the refrigerator for about 1 hour, or until the top layer hardens.

Using a sharp chef's knife, cut the bars into 16 small squares (or whatever size/shape you prefer).  The bars can be stored in the refrigerator, covered tightly, for up to 4 days.