On yet another raining day, I'm in the kitchen whipping egg whites and attempting to make use of that angel food cake pan.  Working with egg whites on a humid day is probably not the smartest thing to do but armed with some cream of tartar and a determination to make my investment in that tube pan worthwhile, I was raring to go. 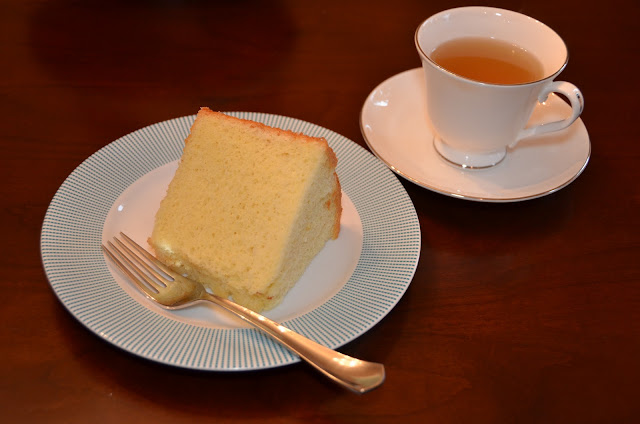 This time, the experiment was chiffon cake.  I was watching Cook's Country From America's Test Kitchen and they were making this cake.  And I wanted to try it because I love plain, "egg-y" cakes without any frosting.  And oh, you know the people from Cooks Illustrated, right?  Their magazine looks like a big pathlet, is essentially black & white, with no advertising, and has diagrams and drawings in place of photography.  They study and test every recipe until they've got it down to a science and then explain it to you and me.  Their food always looks amazing and I've tried a couple of their recipes with success (I follow their technique for cooking Thanksgiving turkey) but it's usually a bit too technical and complicated for me.  But this cake was easy and sounded excellent. 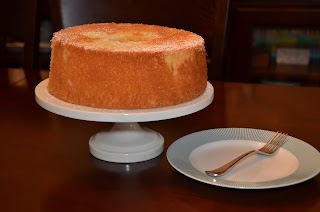 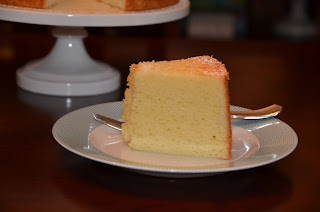 If you recall my angel food cake experiment, I discovered that I really didn't like angel food cake all that much.  I missed the egg yolks.  Well, the chiffon cake is one great alternative.  Here, you have both egg whites and egg yolks.  The lofty texture comes from the whites but you get the richness from the yolks.  The cake is extremely moist like a sponge cake with the use of vegetable oil and water.  I love recipes that use water.  It makes me feel like I must be eating light.  If you like pound cake, this cake is a lighter option.  Of course, you won't get quite the robust richness you'd expect from a pound cake (that comes from lots of butter) but it's still rich and satisfying.  Even my 6-year old liked this cake and he rarely likes anything that isn't chocolate or covered in frosting. 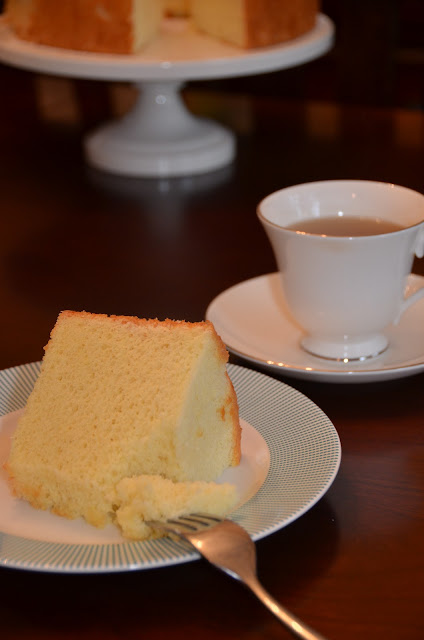 The people on that America's Test Kitchen show make everything look so easy and perfect.  The woman was able to remove her chiffon cake with all the crust intact so that the cake was beautifully browned all around.  I did not fare so well, losing quite a bit of the crust to the pan.  But more importantly though, the texture was moist and spongy (even after a few days).  The taste is light and rich at the same time.  This is definitely more my cup of tea.  I'll be making this again and maybe I'll have better luck removing that crust next time.

The recipe for this chiffon cake from America's Test Kitchen is quite easy to put together.  One thing I do love about using the angel food cake pan is that there's no need to treat it (i.e., no buttering and flouring)

Start by separating 5 eggs.  The whites will be whipped in a stand mixer while the yolks get mixed together with vegetable/canola oil, water, and vanilla extract.  The dry ingredients (cake flour, sugar, baking powder, and salt) should be whisked together in a large bowl.  Pour the wet ingredients into the dry and combined together.  Use a bowl larger than the one shown (I had to swap it later).  The bowl should be large enough to hold all the ingredients as well as the whipped whites. 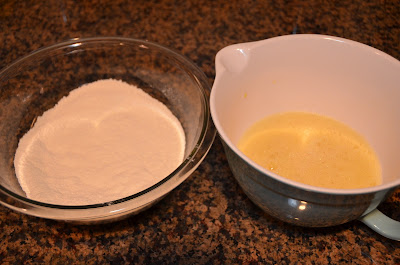 Whip the whites, along with a teaspoon of cream of tartar (this stabilizes the whites and that basically means it makes the job of whipping the whites up easier) on medium-high speed.  When it reaches soft peaks, slowly add 2 tablespoons of sugar and whip until it gets to stiff peaks. 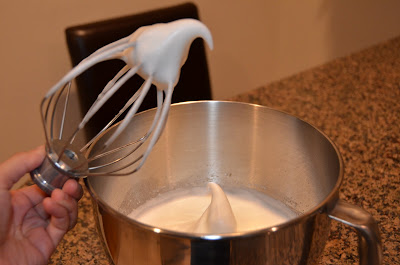 Whisk 1/3 of the whites into the batter to lighten it up. 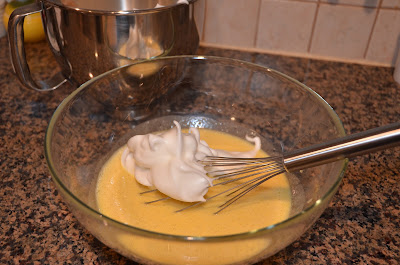 Then add the remaining whites, a couple of spoonfuls at a time, and gently fold in.  Avoid overmixing so don't completely incorporate one installment of whites before adding the next. 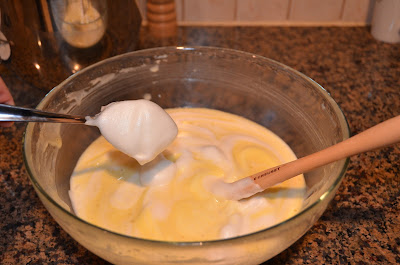 I think the batter is ready for the pan at this point. 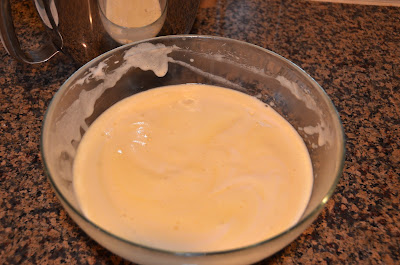 Pour it into an untreated angel food cake pan (I'm so happy I found another use for it!) and bake in a preheated 325 degree oven for 55-65 minutes.  The cake is ready when a toothpick inserted comes out clean. 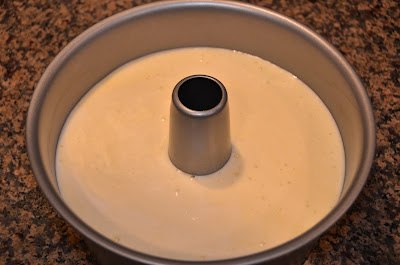 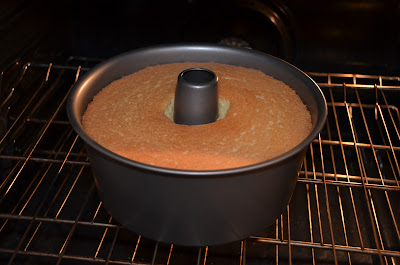 It's a quirky thing but turn it upside down and cool the cake for about 3 hours. 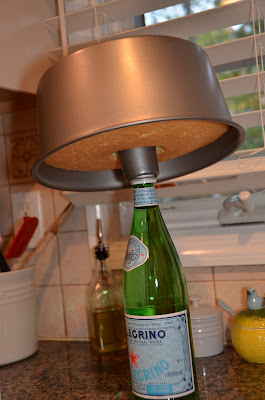 Remove by taking a knife and angling it towards the cake pan to leave as much of the crust intact on the cake as possible.  As I mentioned up front, the woman did a perfect job on the show.  I did not but that's OK. 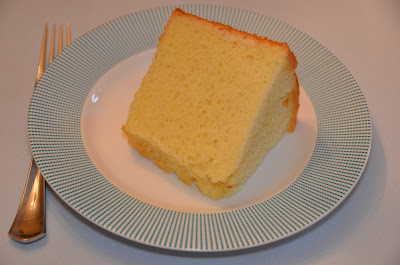 I love to eat cakes like these plain but you could certainly serve it with some macerated (sweetened) berries and whipped cream, as they did on the show.  My husband had some with whipped cream and he said it was really good that way.

Update (August 17, 2012):  I couldn't help but notice that lots of folks have done online searches for this chiffon cake from America's Test Kitchen, and I am so glad!  I've made this cake more than half a dozen times since the first time I posted this and it comes out consistently moist, light, fluffy, and delicious every time.  I crave it very often and it's become one of my favorite everyday cakes.  Here are a couple pictures of the cake I made just yesterday.  I even somehow managed to keep most of the sides of the cake on the cake instead of stuck to the pan! 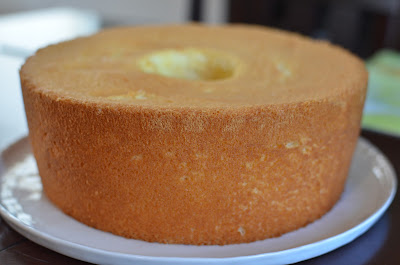 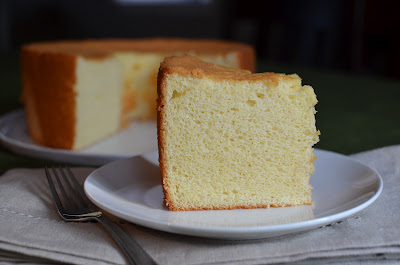 Chiffon Cake
From the show, Cook's Country From America's Test Kitchen on PBS


Preheat oven to 325 degrees.  Place egg whites along with cream of tartar in the bowl of a stand mixer.  Whip with the whisk attachment on medium-high speed until it reaches soft peaks.  Continuing on medium-high, gradually add 2 tablespoons of sugar and whip the whites until they are just stiff and glossy.

In a large bowl, combine the cake flour, sugar, baking powder and salt with a whisk.  In a medium bowl, whisk together the yolks, oil, water, and vanilla.  Add the wet ingredients to the dry and mix (with the whisk) until just smooth.

Whisk 1/3 of the whipped egg whites into the batter to lighten it up.  Then add the remaining whites, a few spoonfuls at a time, and gently fold in.  Avoid over-folding so do not fully incorporate one installment of whites before adding the next.

When all the whites have been folded in, pour the batter into the untreated angel food cake or tube pan.  Bake for 55-65 minutes, or until a cake tester or toothpick inserted into the cake comes out clean.


Turn the cake upside down (over a bottle if your pan does not have "legs") and cool for about 3 hours.  Remove the cake by running a knife around the pan, angling the knife towards the pan to try and get the full crust on the cake.