I made a soufflé!  Yes, my very first soufflé.  I've always wanted to try making it at home but never have until now.  Look how this blog has broadened my baking horizon.  And since we've already kicked off the unofficial start of summer, it's a light lemon soufflé.  It was tart yet sweet, and light as air. 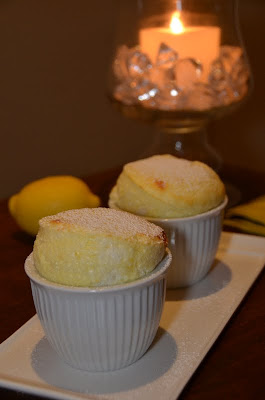 You ever notice we don't often see a soufflé on the dessert menu?  It's too bad but understandable since they need to be made-to-order and timing is so critical (they tend to start deflating seconds out of the oven).  All the more reason to try making them at home. 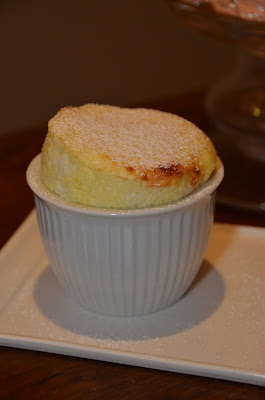 While I haven't had many soufflés in my life, I remember one of the best desserts I ever tasted was a soufflé.  Ironically, it wasn't even my own dessert!  It was my birthday years ago (can't remember how long ago but must've been over 8 or 9 years...if you have kids, do you ever wonder how your life before having your child becomes kind of a blur?) and my husband - then boyfriend - took me to dinner at The Four Seasons Restaurant (not the hotel) in New York.  So there we were sitting in the lovely pool room and I'm really hoping to bump into Martha Stewart (for some reason, I pictured her hanging out there at that time).  But alas, there was no Martha sighting but there was delicious food and for dessert, my husband ordered an apricot soufflé.  I can't remember if the soufflé itself was apricot or if it just came with an apricot sauce.  Either way, I'm thinking "apricot?  no thanks..."

Well, I don't remember what I ordered for dessert (probably something with chocolate) but we do remember the soufflé arriving in all its puffed-up glory.  We took a taste and it was like nothing we ever had.  I can't even describe it but it just tasted sooo good.  It was light and airy and you break into it with your spoon to reveal a hot, slightly liquid center where you then pour a little sauce into.  Beyond just the texture, I just remember it being so delicious.  It was a wonderful surprise and those few bites have left a lasting memory.  While the soufflé I made at home here might not be as glorious as that one was, it felt great to be able to do this with my own two hands. 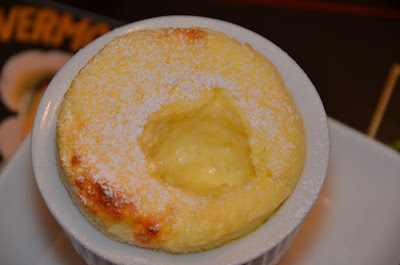 I looked into a couple of recipes for ideas in making this lemon soufflé.  Mostly, the recipe comes from Ready for Dessert but I hope the author doesn't mind that I've simplified it by omitting a couple of steps (for example, the recipe calls for candied citrus peel in the soufflé batter) and tweaking a bit of the proportions.  So while my adaptation might not do that particular recipe justice, it was quite good.

Step 1 - The soufflé base

I'm making 2 servings of the lemon souffle, filled into about 6-ounce size ramekins.  To start, butter the ramekins and cover with sugar, tapping out excess.  I've read that buttering the ramekins in upward strokes helps them rise.  I did this, figuring why not, but I don't know if it helps since you then cover the butter with sugar.

To start on the soufflé base, I whisk together flour, sugar, and a small pinch of salt (exact amounts are listed in the recipe below) into a saucepan.  Then, pour in about a third of the whole milk to make a paste.  Once the lumps are gone, whisk in the rest of the milk and begin to cook over medium heat for a couple of minutes until the mixture thickens a bit.  This happens very quickly since I'm making such a small quantity.  It also helps if you have a narrower or smaller saucepan than I used here since it'll help you control the heat better. 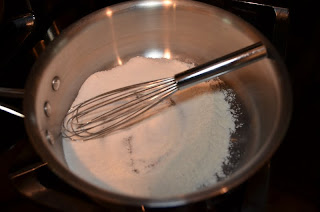 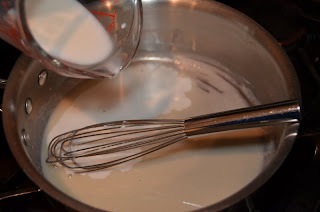 Remove the pan from the heat and whisk in egg yolks and a tablespoon of butter. 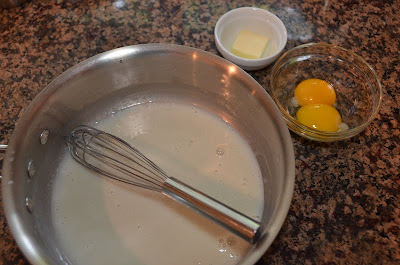 Return the mixture back to the stove and cook until it begins to boil.  Continue to whisk constantly.  Pour the mixture into a medium size bowl (you'll fold your egg whites into this bowl later) and add the zest of one lemon. 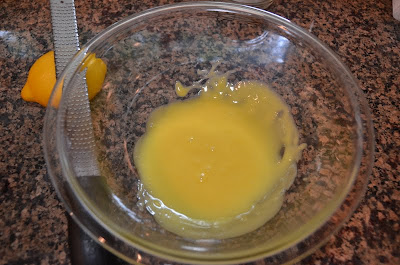 The mixture should cool for about 10 minutes.  Then, add 2 1/2 tablespoons of freshly squeezed lemon juice and your lemon soufflé base is done.  The best part about this is you can make the soufflé base up to a day in advance, refrigerate it, and stop here.  When you're ready to bake, move on to step 2 and whip the egg whites. 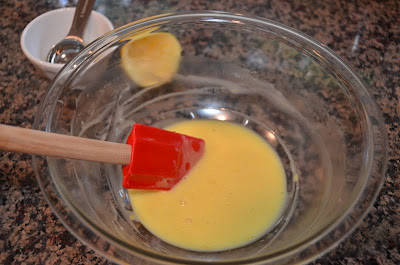 When you're about ready to bake the soufflé, put the egg whites into the stand mixer fitted with the whisk attachment.  Start by beating the whites on low for a minute or two until it starts to foam up.  Then, tick up the speed to high and add some sugar until it reaches stiff peaks.  You stop when you lift up the whisk attachment and the whites hold a little Hershey's kiss shape.  I'm finally learning not to over-whip my whites. 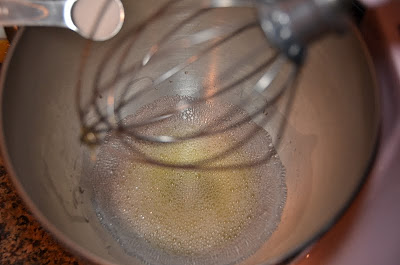 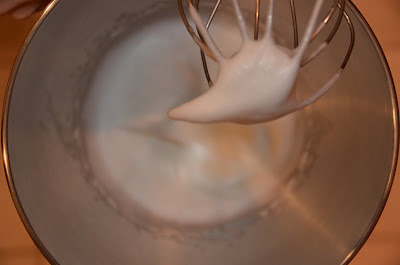 I made the soufflé base a few hours earlier and took it out of the fridge about half an hour before I planned to complete them.  Start by taking about a quarter of the egg whites and folding it into the lemon soufflé base.  Then, add the rest of the whites and fold gently.  Start in the center with your rubber spatula and fold under and around, while turning the bowl.  The goal is to go gentle and not deflate the whites or your soufflé won't rise.  Better to be safe and under-fold it if you're uncertain.  I kept telling myself not to over do it! 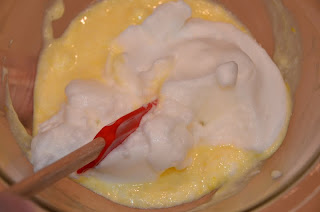 ﻿You can tell you haven't deflated the mixture when it remains fluffy.  If it turns liquid-like, it's probably not a good sign.  I fill the ramekins up to the top.  Then, another little trick I picked up though I'm not sure if it works or not, is I run my clean thumb around the edge of the ramekins.  This is another way to help the soufflé rise.  I think this does help them rise a bit more evenly. 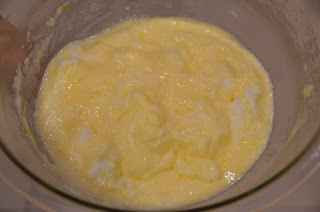 They are ready for the oven but the good news is I learned that they can keep like this in the ramekin for up to an hour before baking.  That's great since these need to be eaten immediately and this gives us a little flexibility with the timing of our meal. 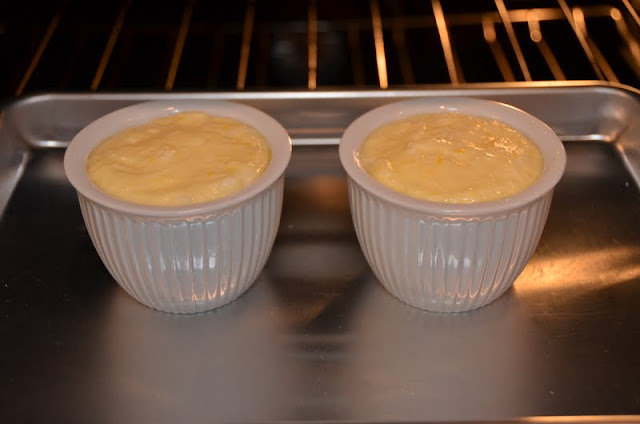 This next part - waiting - was really exciting!  I kept thinking: will it work?  They only take about 10 minutes or so to bake and I'm literally standing in front of the oven, with the oven light on, peeking.  My husband kept joking that we shouldn't talk or make any noise but obviously, that's isn't necessary.  I was so thrilled when they started to rise.  As far as I was concerned, it was a success at this point regardless of how it tasted.  I was just really hoping it wouldn't deflate completely before we got to take a picture of it. 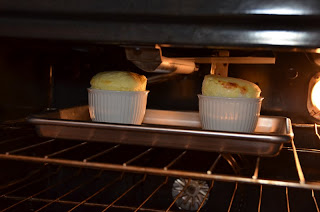 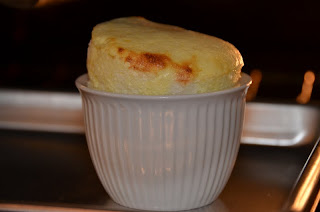 Once done, they've risen and are set though still a bit jiggly when moved.  I took them quickly but carefully out of the oven and added a light dusting of powder sugar on top.  They are at their loftiest at this point.  The soufflés do deflate a bit once out of the oven but it didn't completely sink. 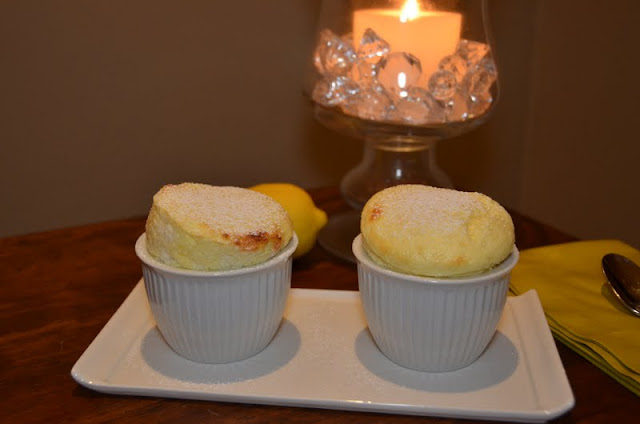 I think this was a pretty good first attempt!  Not only was it fun to watch the magic take place with the egg whites and see the soufflés rise, but the bonus was they tasted great.  Well, let me correct that...I guess it wouldn't matter how much they rise if they didn't taste good.  My husband took a bite, said "mmm..." and got one of those "oh my!  YUM!" look on his face.  Now that tells me we have a winner!  It's such a great feeling to try something new and to be able to make and enjoy something yummy with someone you love.  For this night, my husband and I had a rich spaghetti carbonara for dinner so this light lemony dessert was just the ticket.

I have a feeling there will be more homemade soufflés in our future...

If you're planning to bake the soufflés right away, preheat the oven to 400 degrees.  Prepare the ramekins by buttering them and coating with sugar, tapping out the excess sugar.

Making the soufflé base:

Place flour, 1/6 cup of sugar and salt into a small saucepan and whisk to combine.  Add about a third of the milk to make a smooth paste.  Add the rest of the milk and whisk until smooth again.  Over medium heat, cook this mixture for a couple of minutes until it thickens a bit.  Whisk consistently and keep a close eye on it since it will cook very quickly in such a small quantity.

Take the pan off the heat and add the butter and egg yolks, whisking again until well incorporated.  Place the pan back on the stove to cook gently until the mixture begins to boil.  Remove the cooked mixture to a medium size bowl (this is the bowl you'll use to incorporate the egg whites later) and add the lemon zest.  Let cool for about 10 minutes and then stir in the lemon juice.

You can stop here and refrigerate the soufflé base for up to a day.

Fit the stand mixer with the whisk attachment.  Place egg whites in the bowl and start whisking at low speed for a couple of minutes until the whites get foamy.  Tick the speed up to high and gradually add the 2 teaspoon of sugar.  Whisk until the whites form a stiff peak - that's when the tip of the whites hold the shape of a Hershey's kiss when you lift it up with the whisk.

Combining the two and baking:

First, fold a quarter of the whipped egg whites into the lemon soufflé base.  Add the remaining whites and fold very gently using a rubber spatula.  Cut down the middle and fold under and over while turning the bowl.  Be careful not to overfold or it will deflate the whites and the soufflé won't rise.  It's better to under-fold if you are uncertain.

Place the mixture into the prepared ramekins, filling to the top.  Gently smooth the tops and run your thumb around the edge of the ramekins.  This is supposed to help the soufflés rise more evenly.

Bake for about 10 minutes in the upper part of the preheated oven.  The soufflés should be set though still a little jiggly when moved.  Remove carefully from the oven and dust with confectioners' sugar.  Serve and enjoy immediately.  The soufflés will begin to deflate a bit once out of the oven.
Posted by Monica at 11:00 PM