I know fall is fast-approaching and it's time for pumpkins and earth tones but can we squeeze in one more summer treat?  Let's sit back and have an ice cream sandwich, as we flip through our summer photos and reminisce (because it already feels like a long time ago). 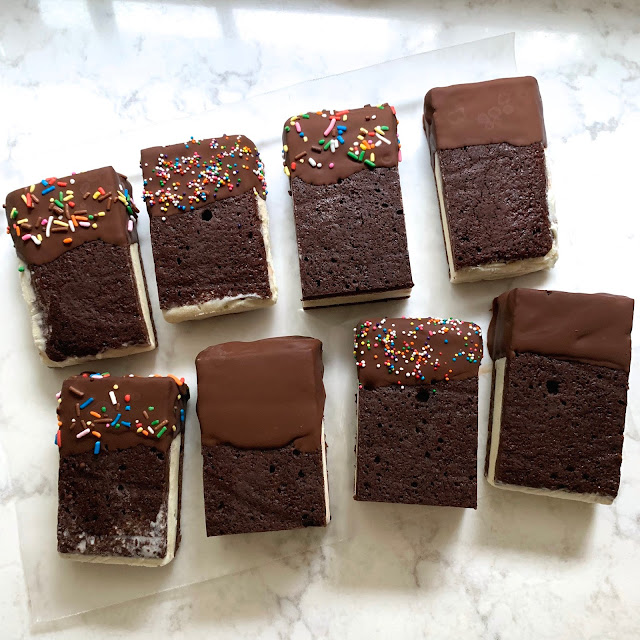 I finally made ice cream sandwiches this summer.  My son adores a good ice cream sandwich and it's one of those things I've been meaning to make - instead of buy - for so long now.  After tackling ice cream tacos, I figured it was past time.  And really, this is just a matter of making the thin, brownie-like, cake layer, then a little quick work (and okay, a teeny bit of mess) spreading some good ice cream in between.  Extra credit if you feel like adding some chocolate magic shell and sprinkles.

I went with a recipe from The New York Times - it's really simple and I liked the appeal of thin brownie-like cake that's soft, slightly fudgy and chewy, as the cap between some good vanilla ice cream.  And when I conferred with my son, we agreed that a classic vanilla ice cream is the best choice for an ice cream sandwich; it's hard to beat that simple contrast between chocolate and vanilla that somehow seems to make both taste better. 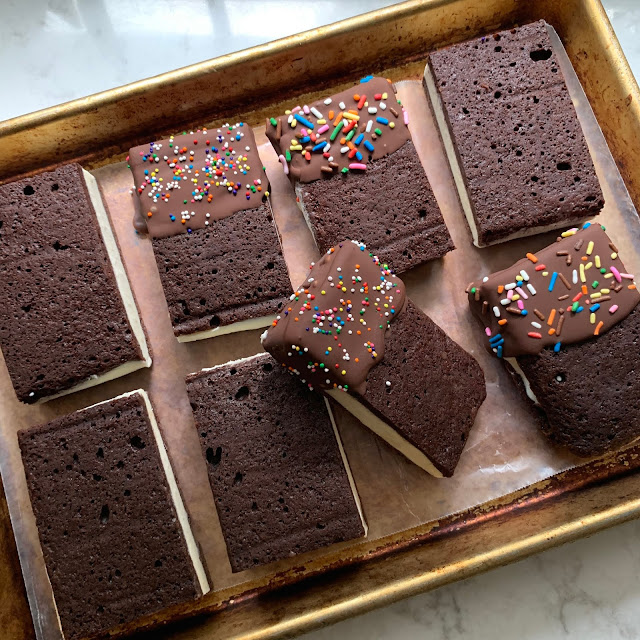 If you want to make it a real project, homemade ice cream is an option, but to save a ton of time, buy a high-quality ice cream to use here.  You want the denser kind that has a higher fat content and less air/overage.  Not only will the ice cream sandwich taste better and be more substantial, it will be easier to work with and less mess, as the ice cream melts a bit slower.  We liked Haagen Dazs ice cream best for this job; Ben & Jerry's is a good second choice in this case.

You'll feel great having these treats wrapped up and stocked in your freezer.  They will go quick!

I make half the original recipe and bake the thin cake layer in a jelly roll pan (it's just slightly larger than a quarter-sheet pan and you can really use either).  After the cake bakes and cools, slice the cake in half crosswise. 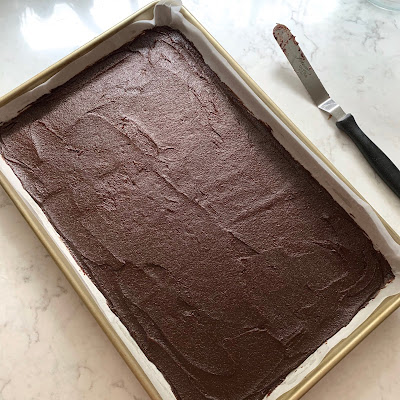 I made these ice cream sandwiches twice.  The first time, the cake layer turned out a little too salty.  While I don't rule out error on my part, I remade it a second time, tweaking down the amount of salt, and we preferred the result the second time around.  (That said, the first round of ice cream sandwiches were readily devoured; I made them the first time for a family gathering and when I realized the cake was a bit on the salty side, rushed to prep some sugar cookies for the kids, too.  Happily, it turned out the kids had no problems polishing off both slightly-salty ice cream sandwiches and sugar cookies.)

Back to the recipe...I'll eventually cut the portions into 8 small ice cream sandwiches.  A pint of ice cream will just about do but if possible, I like a little more so I have a nice generous portion of ice cream in the sandwiches.  Soften the ice cream in the refrigerator (I find it softens more evenly than placing it on the counter) and scoop balls of ice cream over the top of one piece of the cake, taking a small offset spatula to press down and spread the ice cream evenly around before placing the second cake layer on top.  Work as swiftly as possible.  Wrap the large ice cream sandwich in plastic and freeze until firm (best overnight) before cutting, and, if desire, dipping in chocolate magic shell. 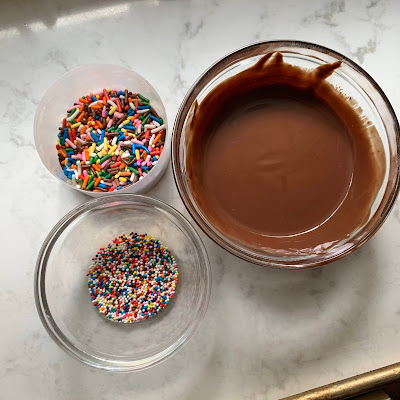 Since I saved a lot of time using store-bought ice-cream, I decided to have a little fun customizing the ice cream sandwiches by coating them in chocolate magic shell.  It's easy enough to make the coating with chocolate chips and coconut oil.  And anytime you coat something in chocolate, reaching for the sprinkles seems to be a reflex action. 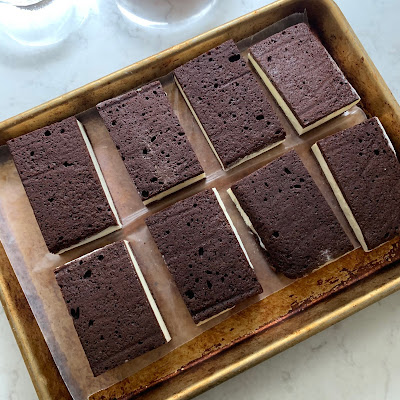 You can surely be a purist and keep the ice cream sandwiches plain and classic.  But I find that most people prefer the extra chocolate and crunch the magic shell adds.  I think everyone who had one with us agreed.  And while classic is great, I can't help but think how fun it would be to make ice cream sandwiches with more exotic ice cream flavors.  There's room for whatever you wish to do.

I do miss summer - the weather (when it wasn't pouring rain/thunder-storming), the eats, the road trips and carefree attitude that just comes with it.  But I do look forward to cozy days and nights, the holidays coming up, and that sort of routine, too.  It's also reassuring to know that we can eat summery things like ice cream sandwiches any time we want.  Make your own and it's an even better reason to indulge!

Butter a jelly roll pan (about 14 1/2 x 10 inches; you can also use a quarter-sheet pan, which is generally slightly smaller) and line it with parchment paper, leaving a small border of parchment paper around the edges.  Preheat oven to 350 degrees.

In a medium bowl, whisk flour, cocoa powder, baking powder, and salt together.

In a large bowl, whisk melted butter and sugar together until creamy.  Add egg, and beat until smooth (I use a stiff rubber spatula).  Beat in vanilla.  Add the dry mixture and beat until combined.

Scrape the thick batter into the prepared pan and spread evenly into a thin layer using an offset spatula.  Bake until cake is set, 10-12 minutes.  Transfer pan to a cooling rack to cool.

Before you're ready to assemble, place ice cream in the refrigerator to soften slightly (the ice cream softens more evenly than if left on the counter).  Carefully lift the cake out of the pan using the parchment paper, onto a cutting board.  Cut cake in half crosswise into 2 pieces.  Using an ice cream scoop, place ice cream evenly over the top of one half of the cake.  Use an offset spatula to spread the ice cream into an even layer.  Place the remaining cake layer, top facing down, on to the ice cream.  Immediately wrap the large sandwich cake with plastic wrap and freeze until firm, at least 8 hours.

Remove the large sandwich from the freezer.  Remove plastic wrap and cut into 8 small ice cream sandwiches.  If leaving as is, wrap individually for storage.

If dipping ice cream sandwiches in chocolate magic shell, place chocolate chips and coconut oil in a microwave safe bowl.  Microwave in 20-30 second increments, stirring well after each, until melted and smooth.  Let cool a few minutes before using.