This breakfast comes to you fresh from yesterday's snow day.  We finally had a snow day!  I didn't think I'd say or think this but I missed having a snow day this winter and was actually hoping for one - emphasis on "one".  Well, my wish came true - snow fell and we were all home, from school, from work, and got a chance to enjoy a little hush and quiet, and to huddle around in the house on a weekday (before it was time to get busy and start shoveling). 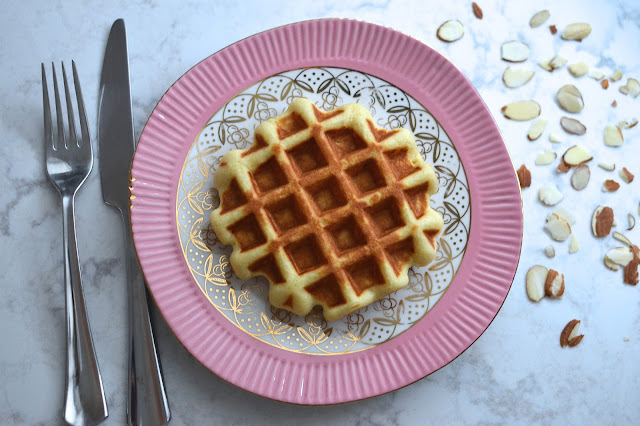 With a snow day, it's important to have plenty of food!  It's also a great time to try a new recipe.  For me, I jumped at the chance to make these almond paste waffles!

If there are a few food items I really love, it's got to include things like chocolate, eggs, almond paste, nuts in general, and sweet potatoes.  Almond paste is right up there.  We love it in baked goods and I've used it in all sorts of ways but not in waffles so when I saw almond paste waffles on Food52, I couldn't wait to try it! 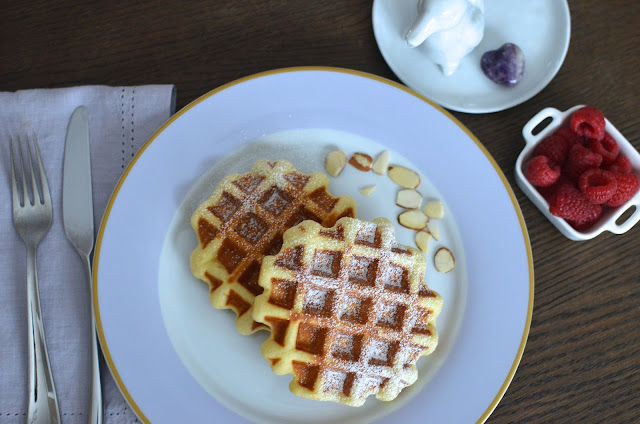 These waffles turned out crisp on the outside, soft on the inside, with a bit of chewiness to its texture, and nice almond flavor.  It's basically how almond paste waffles should taste, I think.

Almond paste is incorporated into the waffle batter by stirring/dissolving small pieces of it into some warmed milk and butter.  I used whole milk instead of the buttermilk listed in the recipe, and I would strongly suggest the swap out because buttermilk has the tendency to curdle when heated.  I didn't have buttermilk on hand so I made a proxy using milk and white vinegar; the homemade buttermilk quickly curdled as I heated it and I had to restart using milk instead.  You might have less of an issue using actual buttermilk rather than my substitute but I'd bypass the risk and go with milk. 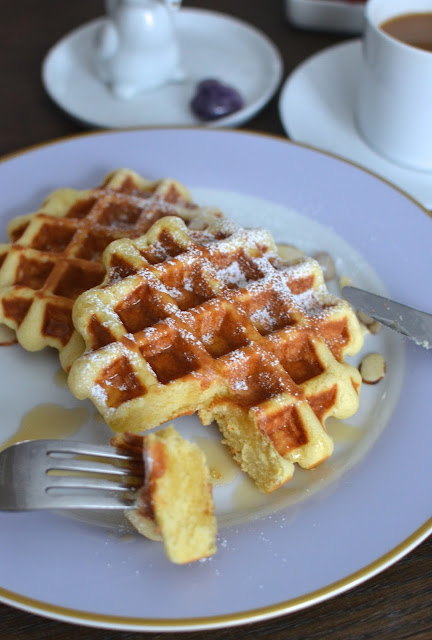 To amp up the almond flavor, I added a touch of almond extract.  The batter is on the thick side and when cooked, you end up with familiar waffles that have a distinct almond flavor and a little chewiness that we really like.  Ironically, the waffles tasted a lot like this almond bread I adore and which I happened to have made a loaf of just 2 days earlier!  It's been an almond breakfast kind of week! 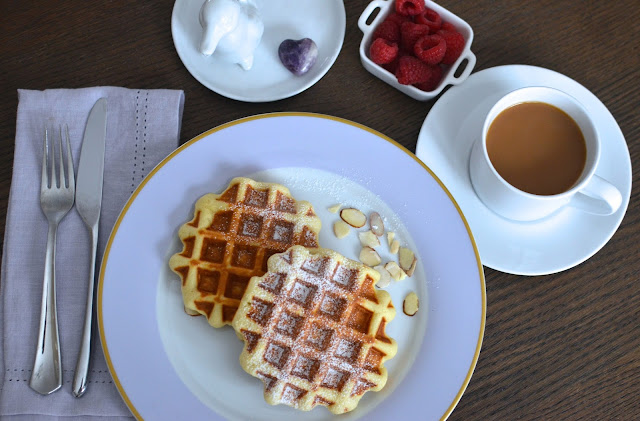 As you know, Valentine's Day is coming up.  How about having an early celebration this weekend with a nice breakfast on Sunday?  If you have an almond lover among you, these almond paste waffles might be just the right treat!  Otherwise, you can always make a batch of chocolate chocolate-chip waffles instead!


On a dark and snowy morning yesterday, I got up and got started on this breakfast... 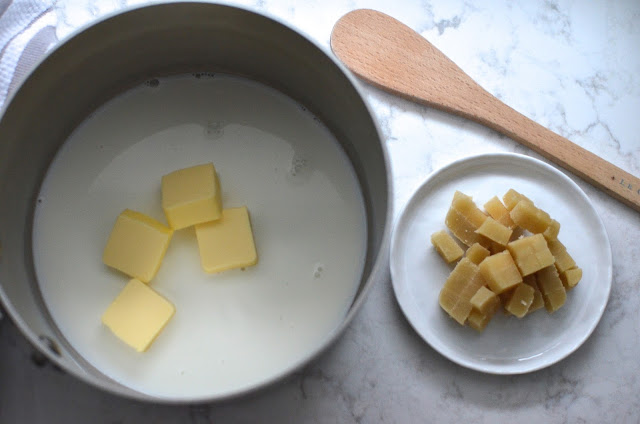 When I first saw the title of this recipe, I wondered how you'd incorporate almond paste into waffle batter.  Turns out, you start by warming milk (again, I used milk instead of buttermilk) with some butter.  To that warm/hot mixture, add 80 grams of almond paste that's been cut into small pieces so it can more easily break down.  Stir the almond paste into the warm milk; to help it dissolve and blend into the liquid, I used a wooden spoon to basically mash the almond paste against the side of the pan. Stir and blend together until most of the almond paste has dissolved. 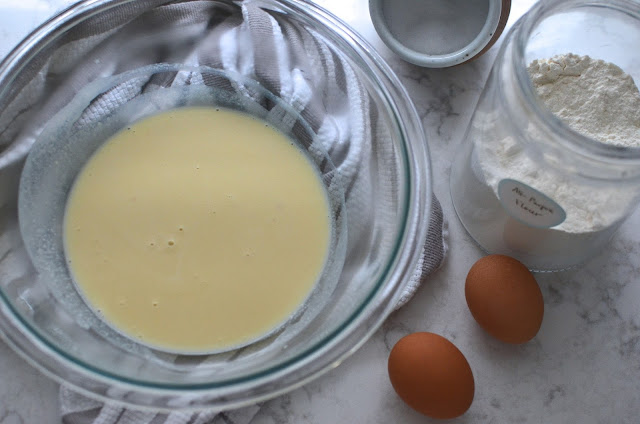 You can continue the recipe in the pan but I choose to transfer the now slightly thickened milk and almond paste mixture to another bowl.  I allowed it to cool a bit before whisking in the rest of the ingredients - flour, baking powder, salt, eggs, and for good measure, 1/4 teaspoon of almond extract. 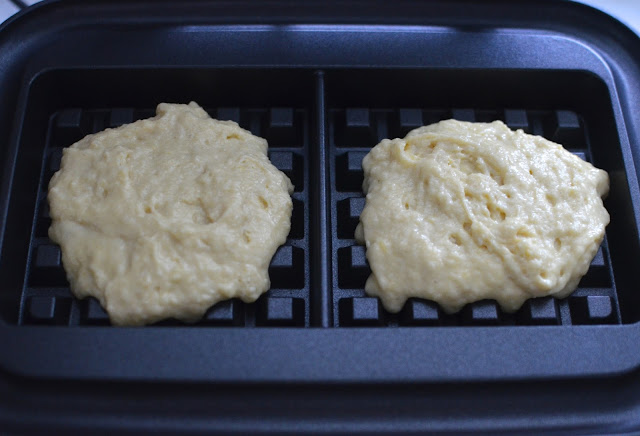 The waffle batter rests while the waffle maker heats up.  Then just spoon the thick batter into your waffle maker and cook until golden brown to your liking. 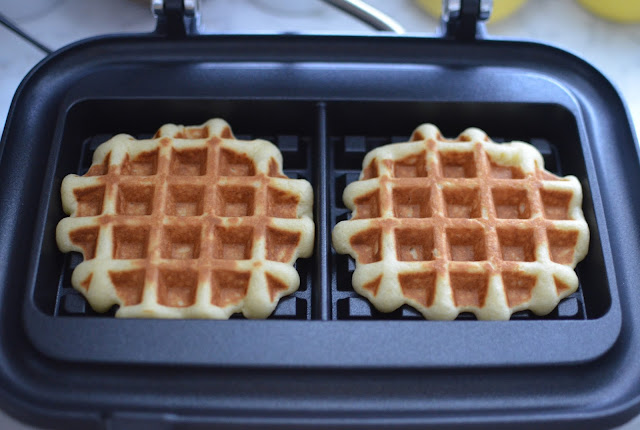 As I make waffles, I place cooked ones onto a baking sheet set with a wire rack on top and leave them in a 200 degree oven.  When it's time to eat, plate the waffles and serve them up!  In this case, let everyone enjoy these almond-scented and flavored waffles. 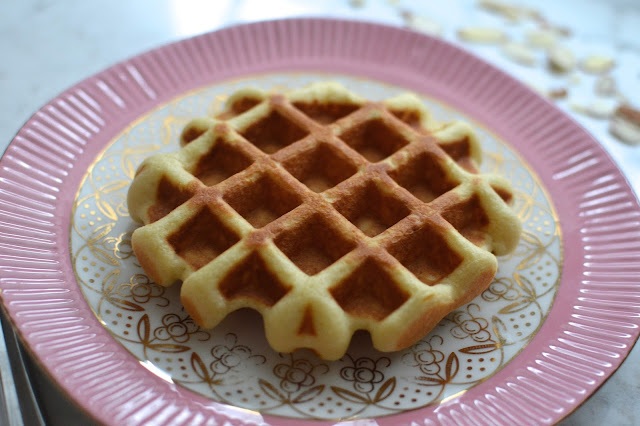 Breakfast is special to me, maybe because I'm a morning person and I love the start of a new day of eating!  I think it's really important (and nice) to have a good breakfast, especially on the more relaxing weekends.  I have to thank this past snow day yesterday for an unexpected treat on a weekday. 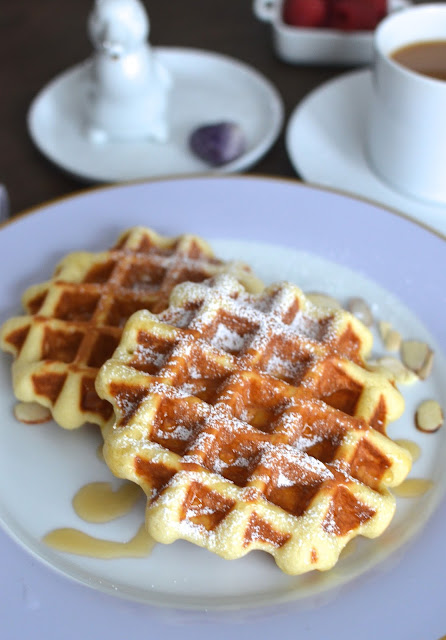 Place milk and butter into a saucepan and heat over medium-heat until butter melts. Add almond paste and sugar, stirring with a wooden spoon or sturdy rubber spatula until almond paste is mostly dissolved (I stir as well as tilt the pan slightly and mash the almond paste against the side of the pan).  Let cool slightly.

Add flour, baking powder, salt, eggs, and almond extract.  Whisk together until combined.  Set the waffle batter (it will be relatively thick) aside for about 10 minutes while the waffle maker heats up.

Cook waffles according to manufacturer's instructions.  Serve immediately with maple syrup, if desired.