I think the first time I had flautas, I was in my early twenties (which is longer ago than I want to believe).  It was over dinner with co-workers at a Mexican restaurant; our boss had taken us out for a holiday meal near year-end.  The main things I remembered about that meal were the excellent frozen margaritas (the kind that came out of a machine, very much like a slushy) and the delicious flautas.  I'd never had them before and was smitten with the crunchy, meaty, and cheesy bites of what is essentially a rolled up taco.  They went very nicely with the frozen margaritas but since I'm not much of a drinker, it's the flautas that stayed with me most. 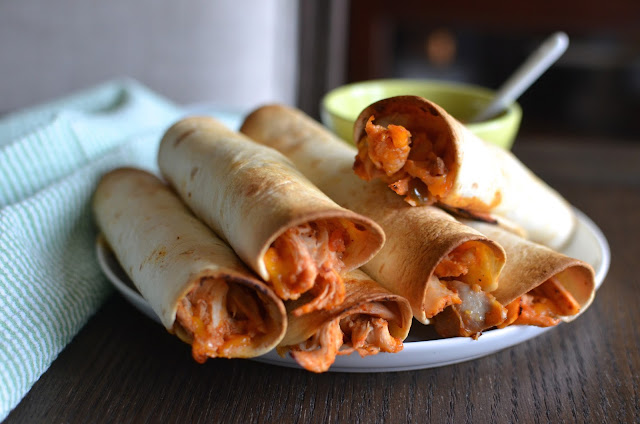 Whether you call them flautas or taquitos, they're basically small rolled tacos, filled with meat and cheese, commonly fried to give them an irresistible crispness.  You might know you can find them in the freezer aisle at the supermarket.  I used to stock my freezer with ready-made flautas and occasionally heat up 2 or 3 to have as an evening snack (after dinner), with a soda!!  I was young and "wild" once upon a time.

I don't know when I gave up eating flautas.  The time right after my son's birth and the early years after that are a little bit of a blur to me, to be honest, and everything was reset in many ways.  But I often find myself telling people I love flautas even though I rarely eat them!  Mexican food, which I always think of as "fun" food, is something I want to get to know better beyond making quesadillas and having occasional taco nights at home. 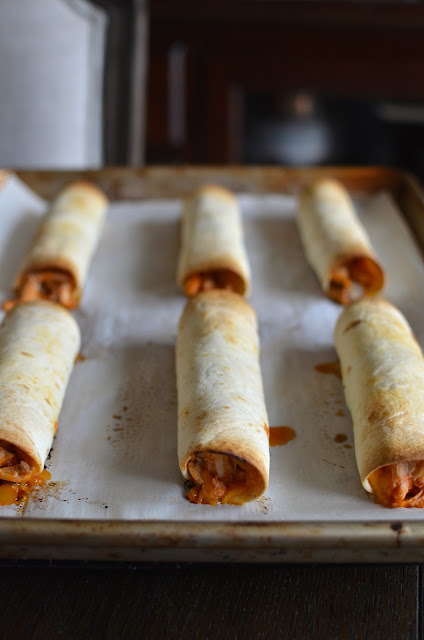 Eating at Mexican restaurants is certainly a fun way to learn more about the cuisine but sometimes you have a great meal and other times, you end up a little disappointed.  That happened recently when I thought I'd finally introduce my son to flautas; when we tasted them, they were disappointing (sadly lacking in flavor and cheese) and he probably had to wonder why I keep saying they'd be so good.

If you're like me, you're often tempted to try to make for yourself the things you like to eat or foods that you remember fondly.  So this was my stab at flautas.  This homemade version couldn't be easier, in my opinion!  I took Giada De Laurentiis' recipe, which includes a genius shortcut filling made with: shredded rotisserie chicken, prepared salsa (that's the genius part!), cheese, and a little seasoning.  But instead of frying the flautas like she does, I decided to simply bake them in a 425 degree oven for about 15 minutes or so. 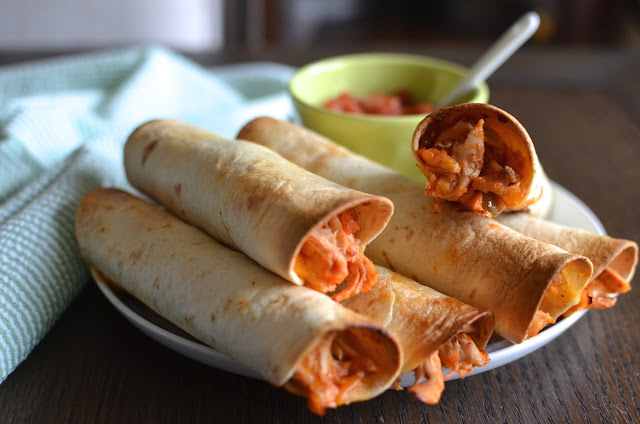 I tell you what...these satisfied my flauta fix!  The fellas loved them and my son tells me they were far better than the ones we had at the restaurant.  There's no reason not to make them - they are fast, easy, and no-mess (not to mention, lower calorie and better for you) when you skip the frying.  With the Superbowl coming up, I know we're all thinking about finger foods and fun foods.  I think these definitely fit the bill.


Let's get to making these super easy baked flautas! 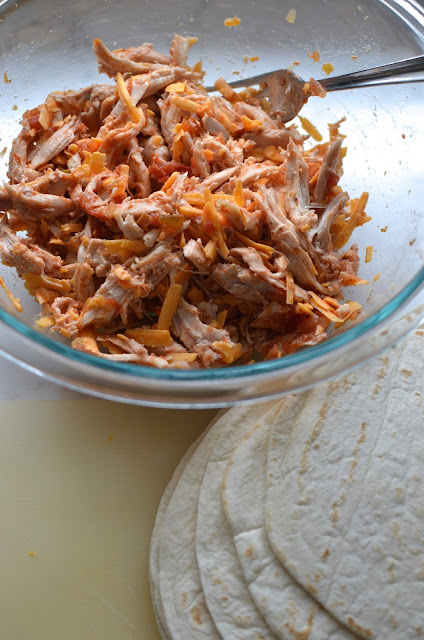 Shred about 2 cups of rotisserie chicken.  To that, add about 1/2 cup of prepared salsa.  When I first saw this recipe, I thought that was such a great shortcut.  Many other recipes that use store-bought rotisserie chicken still called for some additional cooking - whether it be with onions and/or other aromatic spices and ingredients - but the salsa effectively takes care of that.  Then, add shredded cheese; I used sharp yellow cheddar.  Finally, toss in some seasoning. I added cumin as well as a little paprika, chili powder, and black pepper.  You can play around with it.  Either way, mix it all together and it's done! 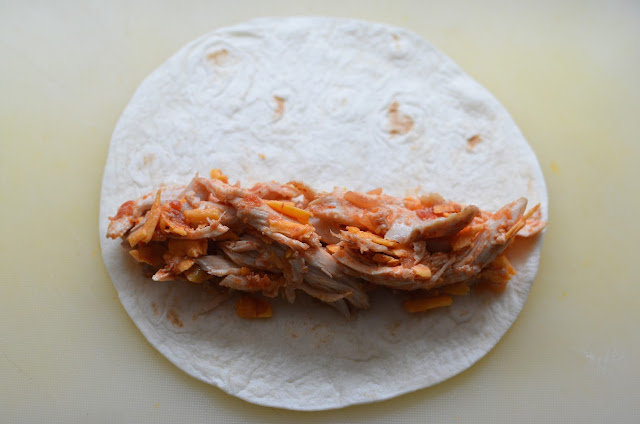 Grab some 6-inch flour tortillas.  The benefit of using flour, instead of corn, tortillas is they are softer/easier to roll and you don't need to worry about the shell cracking. Place a generous amount of filling in the lower third of the tortilla and then simply roll them up tight, placing each seam-side down on a parchment-lined baking sheet. Depending on how generously you fill your tortillas (I was quite generous), you'll get 6 to 8 flautas from this recipe.  I made 6; some of my tortilla shells were slightly bigger than others and I packed in the filling. 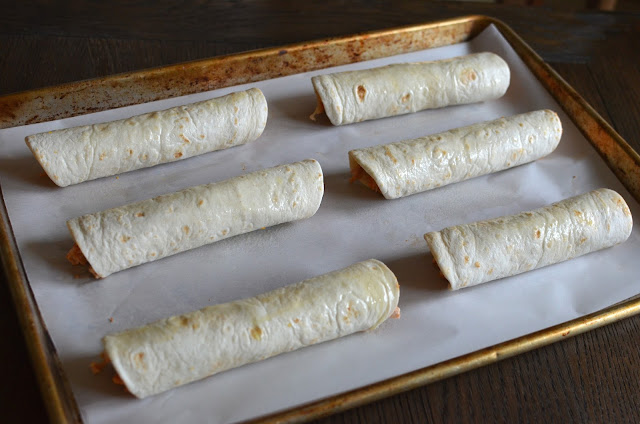 I brushed the tops of the rolled tacos with oil, then placed them in a hot 425 degrees. Bake for about 15 minutes or so, until the tortillas are browned and crisp and the cheese starts to ooze out and bubble. 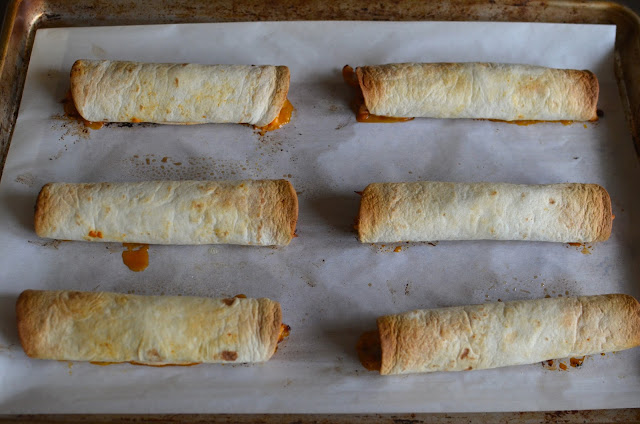 They smell delicious and they're ready to eat after a few minutes of cooling time.  You can also make them ahead and warm them back up later, or make extra and freeze them for a later day. 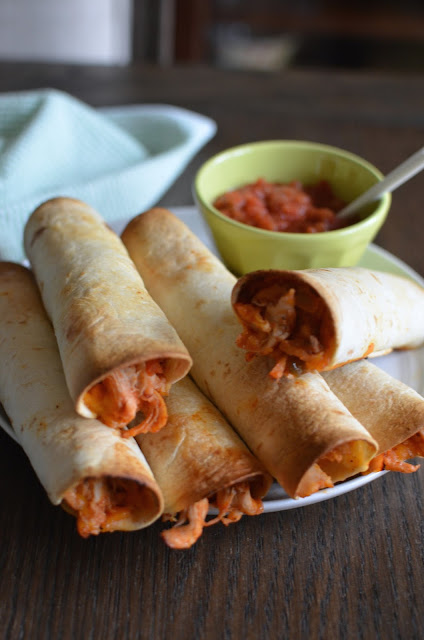 I served the flautas with a little extra salsa on the side.  Needless to say, they would be great with some guacamole.

Making them at home, each bite of these is chock full of chicken and flavor.  The chicken and cheese filling is a classic, satisfying taste but if you want to be a bit more inventive, try adding other ingredients like black beans into the filling.  I was happy to get the hit of gooey cheese we were missing from the recent restaurant version, though I did think I could have been more generous with the cheddar.  So when in doubt, go with a little more cheese!

In a bowl, mix together the chicken, cheese, seasonings, and salsa for the filling.

Place about 1/4 cup of filling onto the lower third of a tortilla.  Roll the tortilla up tightly around the filling.  Place it, seam-side down, onto the prepared baking sheet. Continue with remaining filing and tortillas.

Brush the tops of the flautas with oil, or spray evenly with cooking spray.  Bake until the flautas are browned and crisp and the cheese is melted, about 15-18 minutes.  Let cool for a few minutes, then serve with additional salsa or other accompaniments you enjoy.