Having a jar of homemade strawberry jam on hand was the perfect reason to bake up a batch of scones.  It gave me an excuse to try my hand at British-style scones and I made a British-themed breakfast out of it; I love a good theme to a meal! 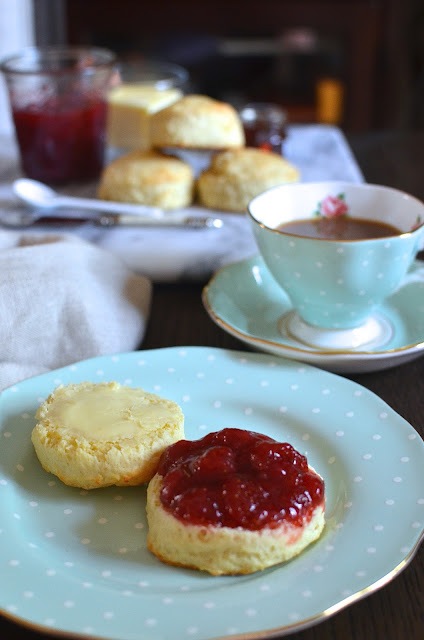 For a while now, I've been intrigued with the idea of baking up a different kind of scone.  Now, I speak with no authority whatsoever on this - having never had the pleasure of sitting down to a proper tea in the U.K. - but it is my understanding that British style scones are very different from American ones.

Cook's Illustrated has an excellent article that outlines the difference between the two. To sum up, British-style scones use less butter, are more cake-like, on the more light & fluffy side, and are less sweet than American-styles scones. American scones are more buttery, flaky, and biscuit-like.  While American-style scones often incorporate all kinds of add-ins (from fruit to chocolate chips), British scones are generally plain or simply include currants or raisins. 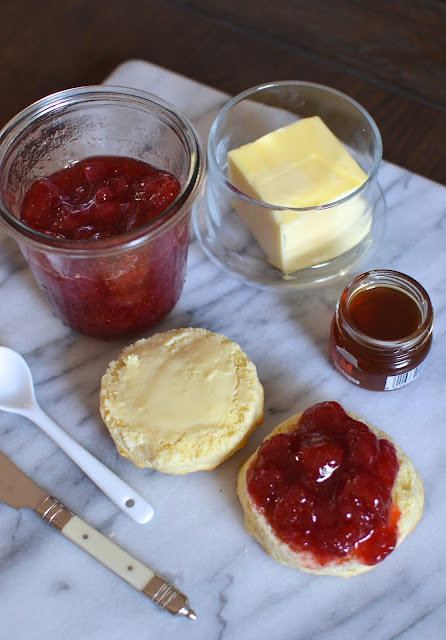 It's not to say that one type of scone is better than the other; they're just different. And for me, different is good; there's a time and place for everything.  British scones aren't necessarily "better" or more virtuous simply because they're lighter. There's actually a reason for the restrained use of butter...British-style scones are meant to be split open and topped with an ample slathering of butter, jam, cream (clotted or otherwise), and/or other equally tantalizing things like honey or golden syrup.  I can remember watching Nigella Lawson eating a scone in such a way on one of her television programs, and being totally mesmerized.
When it comes to American-style scones, on the other hand, we rarely need anything to go with it because they are so buttery and flavorful all on their own.  So it's essentially about different philosophies.  Why not try both and enjoy them in their own way?

Today, it's British-style scones.  I used Mary Berry's Devon (or Devonshire) scone recipe.  Are you familiar with Mary Berry?  I came to know of her after I started watching The Great British Bake Off (where amateur bakers take on baking challenges, very often amazing me with their abilities). 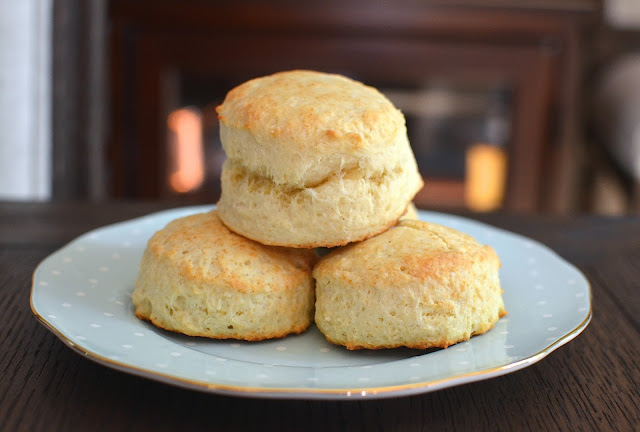 Now is the time to admit, again, that I am really not good at handling dough, as in scone or biscuit making.  I'm pretty sure the dough can sense my fear.  Take a look at the scones above...only one baked up with a fluffy height and, ironically, it came from some re-rolled dough!  It's all a bit of a mystery to me and I just can't seem to get a good handle on it. 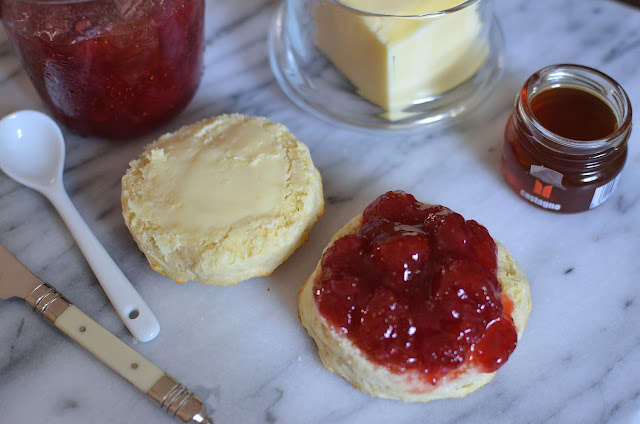 Luckily, despite the general lack of height, the scones turned out light and fluffy - definitely more cake-like than we're used to when we think of scones.  They were a great canvas for the homemade strawberry jam, and other things, we decided to spread on. 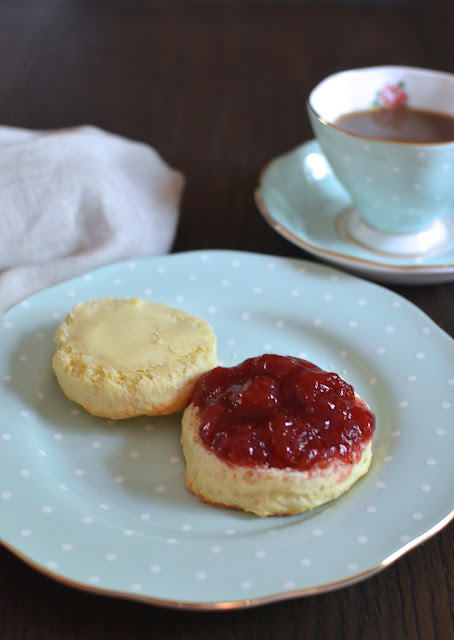 The "ceremony" of sitting down, splitting our scones, and deciding what we wanted to spread them with was a nice way to slow things down.  I would definitely say our British-themed tea breakfast was a fun hit!


A couple of notes on this recipe...first, it calls for self-rising flour, which I essentially DIY'ed by whisking in 1 1/2 teaspoons baking powder and 1/4 teaspoon salt for each 1 cup of all-purpose flour.  You will need 1 3/4 cups of this flour for the recipe. 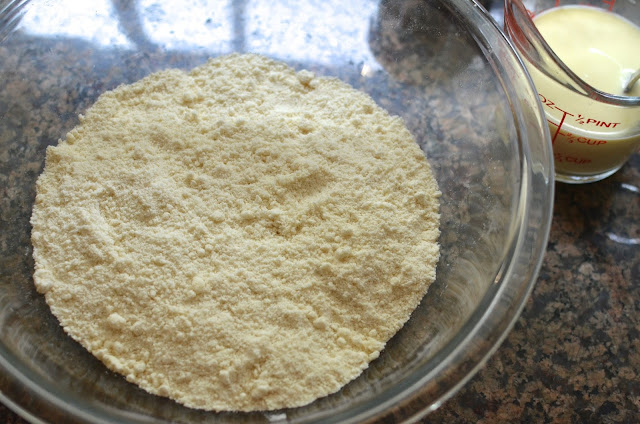 And you know how we're typically instructed to work the butter into the dry ingredients until a "coarse meal" forms, and you see some pea-sized bits remaining?  In the case of British-style scones, you work the (smaller amount of) butter well into the dry ingredients to the texture of breadcrumbs.  In other words, you want a finer consistency and the butter to be well incorporated into the flour.  The "breadcrumb" description is one I saw often. 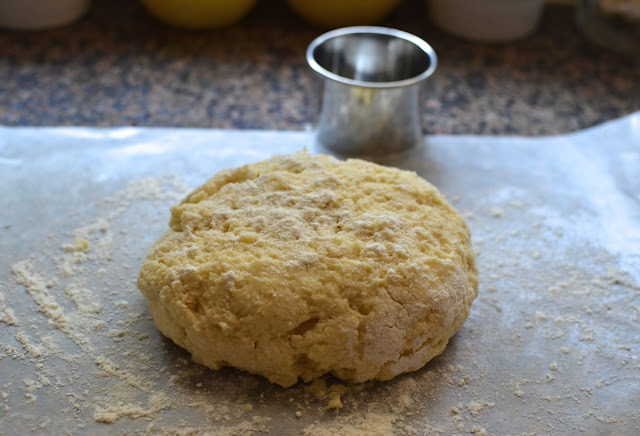 And the resulting dough...it will be fairly wet and sticky.  I'm used to a dry, often difficult-to-bind-together dough when it comes to American-style scones.  According to Mary Berry, the wet and sticky dough is one of the secrets to a good Devonshire scone, together with not handling the dough too much.  Warnings like that scare me a little, and I almost feel like I under-handled the dough, if that's even possible. 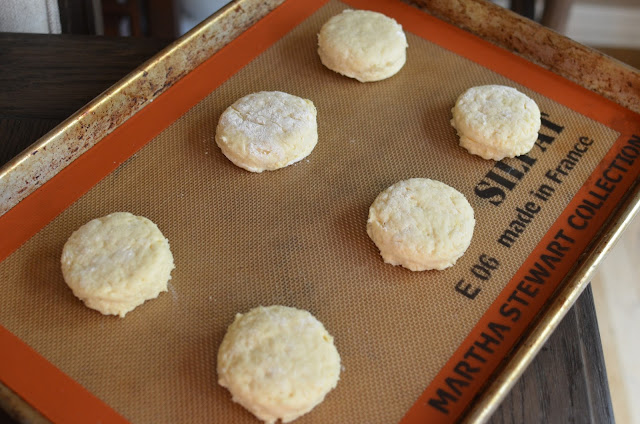 I pressed the dough out to about a 3/4 inch thickness (instead of the instructed 1/2 inch), then cut the scones out using about a 2 1/2 inch round biscuit cutter (I don't have a 2-inch one which seems to pop up a lot).  Try to cut the rounds by pressing the cutter straight down into the dough, without twisting, so they maintain their shape and rise evenly while baking.  Be sure to thoroughly flour the surface you're working on.  Since the dough is rather wet and sticky, they are a bit tricky to remove, as I experienced firsthand. 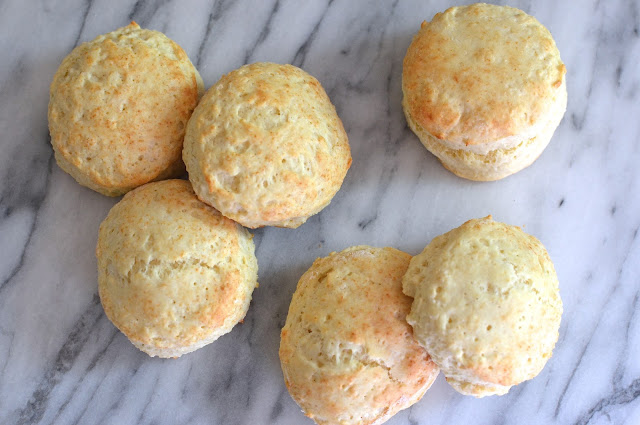 I have to admit I only got 6 biscuits out of my batch, instead of the 12 I might have expected.  However, I did make the dough a little thicker and cut my scones a bit larger than the original recipe.  I could probably have squeezed another one out of my dough scraps but honestly, I was trying to quit while I was ahead! 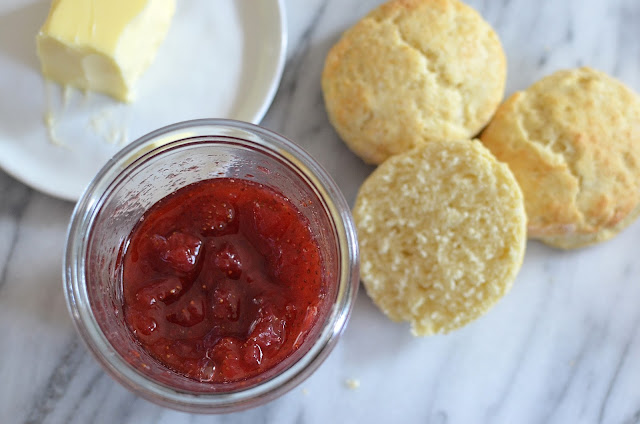 I was relieved when the scones proved to be soft, fluffy, and cake-like in the middle, as they are intended to be.  They're also a bit crumbly, too, which you'll notice as you spread your topping onto a split scone.  The mildly sweet flavor is a great base for your jams and other toppings of choice. 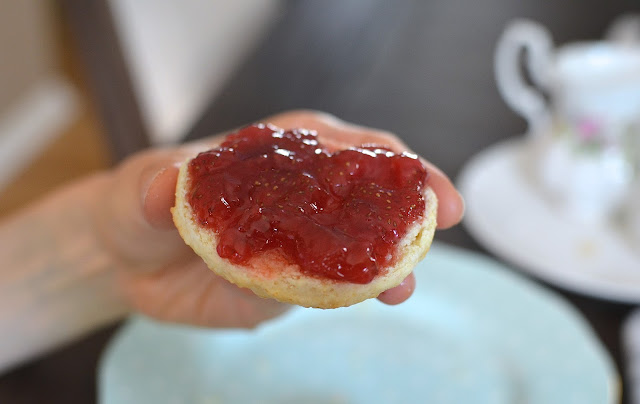 I always love trying something a little different and this was no exception!

For serving: jam and butter, and/or other toppings (honey, cream, Nutella...) you enjoy

* To make a substitute for self-rising flour: For each 1 cup of all-purpose flour, whisk in 1 1/2 teaspoons baking powder and 1/4 teaspoon salt.

Sift flour into a medium-size bowl.  Rub butter into the flour with your fingertips until it resembles fine breadcrumbs.  Stir in the sugar.

Break egg into a 1-cup liquid measuring cup.  Add enough milk to reach the 2/3 cup mark.  Beat lightly with a fork to combine.  Add the milk mixture to the bowl and mix with a fork to form a soft dough.  The dough will be on the wet and sticky side.

Turn the dough out onto a work surface that's been dusted with an even coating of flour.  Lightly knead the dough until smooth.  Roll/pat dough until about 1/2 to 3/4 inch thick (I prefer the higher, 3/4 inch, thickness), cut into rounds using a 2-inch round pastry cutter.  Press the cutter straight down into the dough, without twisting, to help ensure a more even rise.  Transfer to baking sheet.  Re-roll scrapes once and cut until dough is used up.  Brush tops (not the sides) of the scones with milk.

Bake for about 10 minutes, until risen and golden.  Cool on a wire rack and serve fresh, if possible, with butter and jam.  (Baked scones can be frozen once fully cooled. Allow to thaw for a couple of hours at room temperature and refresh them in a moderate - about 300 degree - oven for about 10 minutes.)