I hope you had a lovely Valentine's Day weekend.  After all the chocolate talk we've been indulging in, I'm ready to take a trip on the savory side.  Let's make soup! 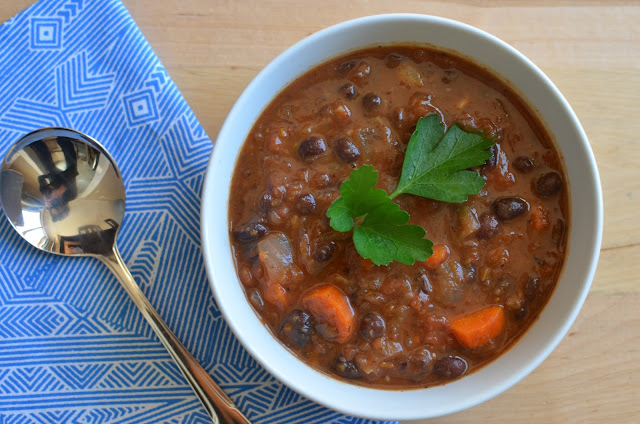 Soup is one of those hearty, comforting things I enjoy all year round.  But when the temps drop, as it did this past weekend into negative territory, I really get the hankering to make and eat some.

I've rarely met a soup I didn't like.  It's hard to go wrong with you're starting with things like onions, carrots, and garlic.  So I'm pretty open-minded when it comes to soups.  For the most part, I'm looking for something simple, delicious, and nutritious that could fill in as a meal or be a great starter.  I keep an eye out for good possibilities and this latest soup caught my eye and comes from the current issue of Rachael Ray magazine. 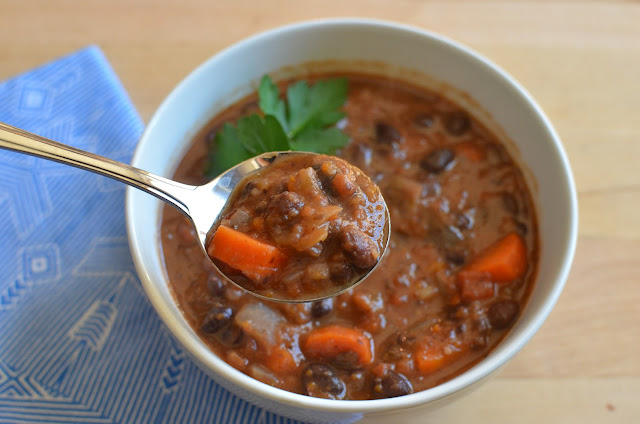 This is a thick black bean soup that reminds me a lot of chili.  It's made with pantry staples like canned diced tomatoes and black beans, as well as fresh ingredients in the form of onions and carrots.  Flavored with garlic, chili powder and dried oregano, everything cooks together and then you take an immersion blender and blend about one-third of the soup to make a thick consistency.

This thick, creamy, satisfying soup was just what we needed over the past weekend with the freezing temps.  I wish I had some more left but we seem to plow through soup very quickly here.  Looks like I'll need to make more soon!

I didn't mention it in the recipe but I tossed a few extra spices into the soup.  It's fun to look in your spice cupboard and throw a few extra pinches of flavor into your soup. I added some paprika and cayenne, as well as a pinch of red pepper flakes.  Feel free to toss in a little ground cumin or other spices you enjoy. 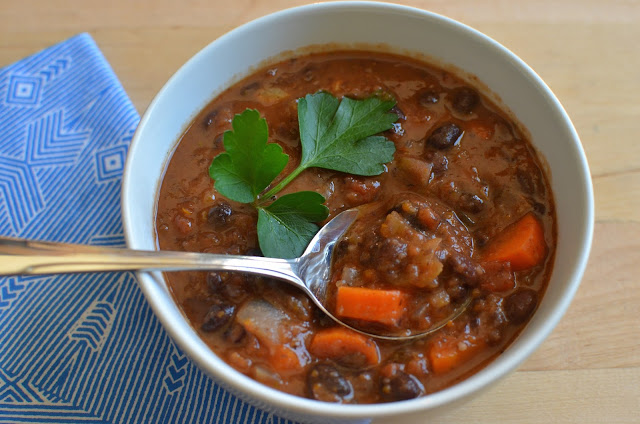 This final soup is nice and hearty and my husband and I enjoyed it plain as well as with sandwiches.  If you'd like to include some toppings, the recipe suggests toasted corn tortillas (cut tortillas into thin strips, lightly spray with cooking spray and bake at 425 degrees for about 6-8 minutes until crisp) as well as a dollop of light sour cream. Both good ideas, I think...

Are you planning on making soup soon?  It always hits the spot!

In a large saucepan or dutch oven, heat oil over medium heat.  Add onions, carrot, and garlic.  Cook, stirring occasionally, until softened, about 6-8 minutes.  Stir in the chili powder and oregano.  Cook, stirring often, for about 1 minute.

Add tomatoes and cook, stirring occasionally, for about 5 minutes until liquid reduces slightly.  Add beans and stock.  Bring to a boil, then reduce the heat to medium and simmer for about 20 minutes, stirring often.  You want to give the soup a chance to thicken and for the flavors to meld.  Season with salt and pepper, to taste.

Let soup cool for 5 minutes, then puree about one-third of the soup with an immersion blender, or in a blender.  Stir together and the soup is ready to serve.