Farro with garlic-roasted tomatoes and edamame

Farro is one of my favorite grains to eat.  I love its nuttiness and chewiness.  I find it's a grain that's easy for so many to love because it's not quite so chewy and hard - like wheat berries (which I personally also love), for instance.  Its firm yet still familiar texture makes it a great component/accompaniment to salads, soups, stews, and so many other dishes. 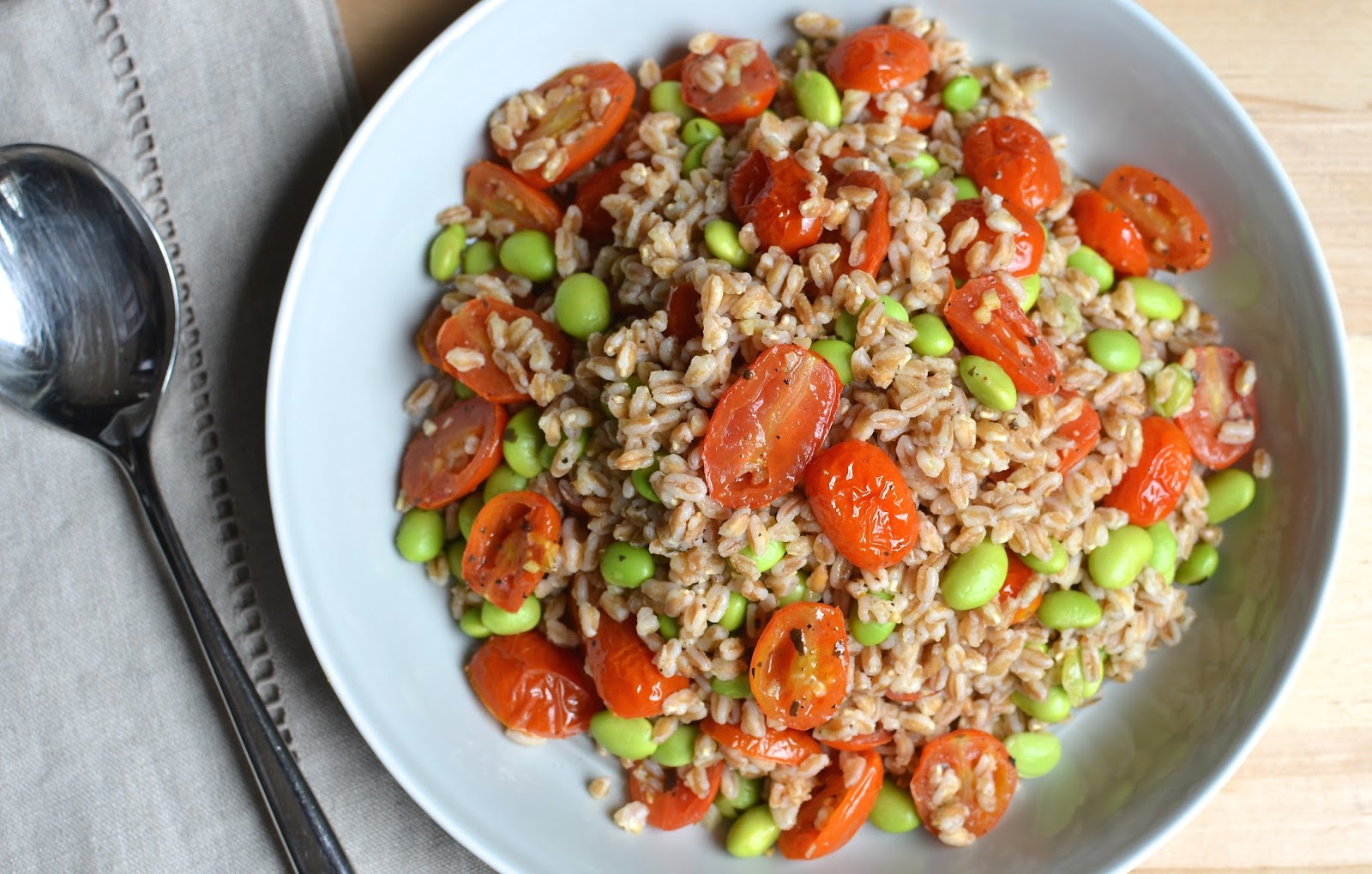 I like mixing up our default brown rice with farro for dinner and making it a focal point of the meal by making farro risotto, too.  It's pretty easy to add farro (and other whole grains you enjoy) into your meals.  I especially love grain salads, particularly in the summertime when seasonal vegetables are plentiful (though roasted root vegetables are always nice, too).

I'm always happy to check out farro recipes and I really liked one I saw from Cooking Light last December.  I adapted the recipe some but the main idea was having roasted grape or cherry tomatoes as a basis for the dish.  I love to roast grape tomatoes.  I typically roast a big batch of them with garlic to toss with pasta but why not do something a little different and mix it up with some farro instead. 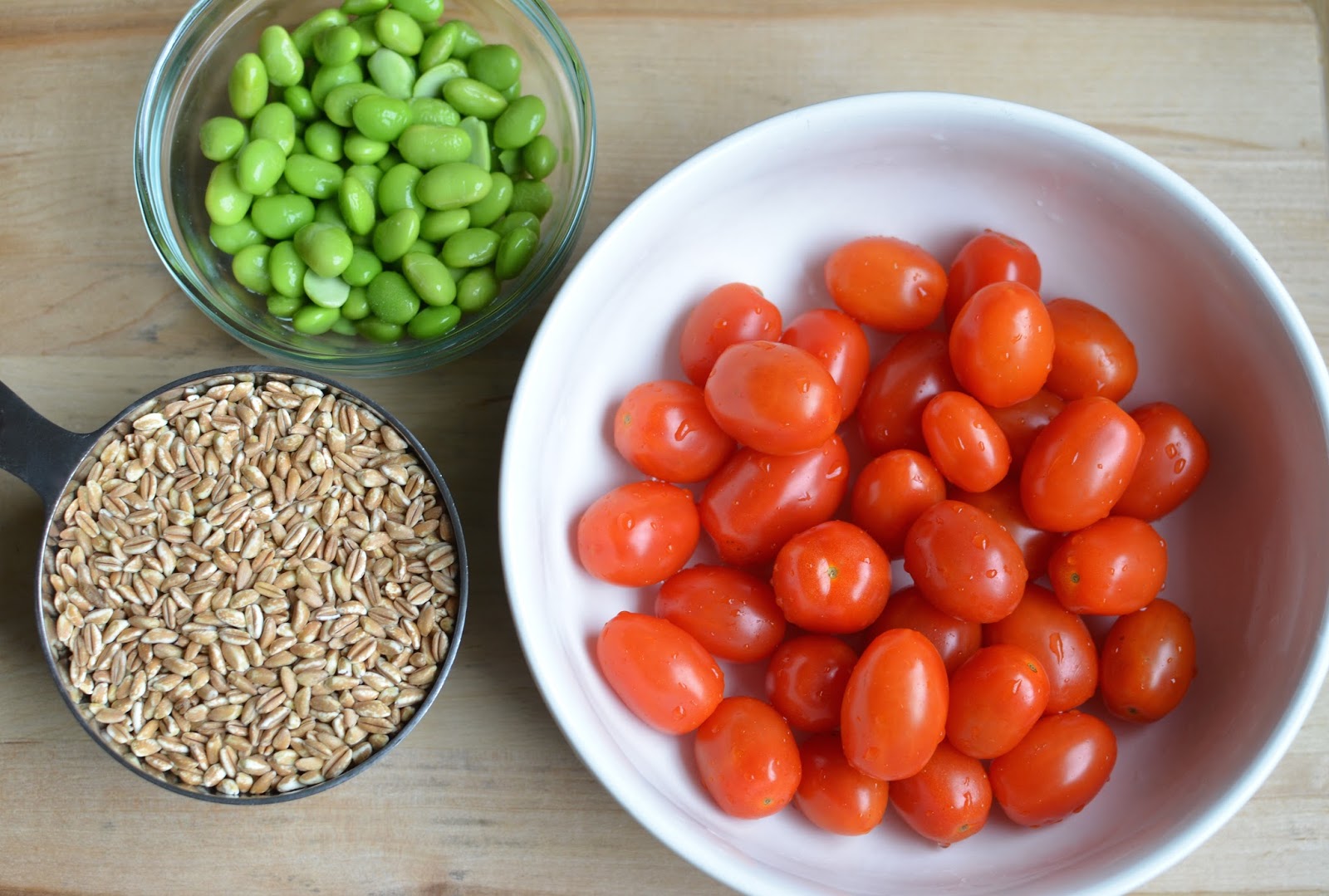 And boy, this is one of those so-simple yet so-tasty little dishes.  I'm thinking it's a great side for summer barbecues but whenever I make something like this, I want to make a whole meal out of it all on its own because it's just so tasty.

I played around with the recipe a little but it starts with roasting some grape or cherry (I used grape) tomatoes with garlic until they're just soft and somewhat crinkly, not so far that they are totally broken down into a sauce.  You want to soften and draw out the sweet-tart flavor of the tomatoes while keeping much of the structure intact. 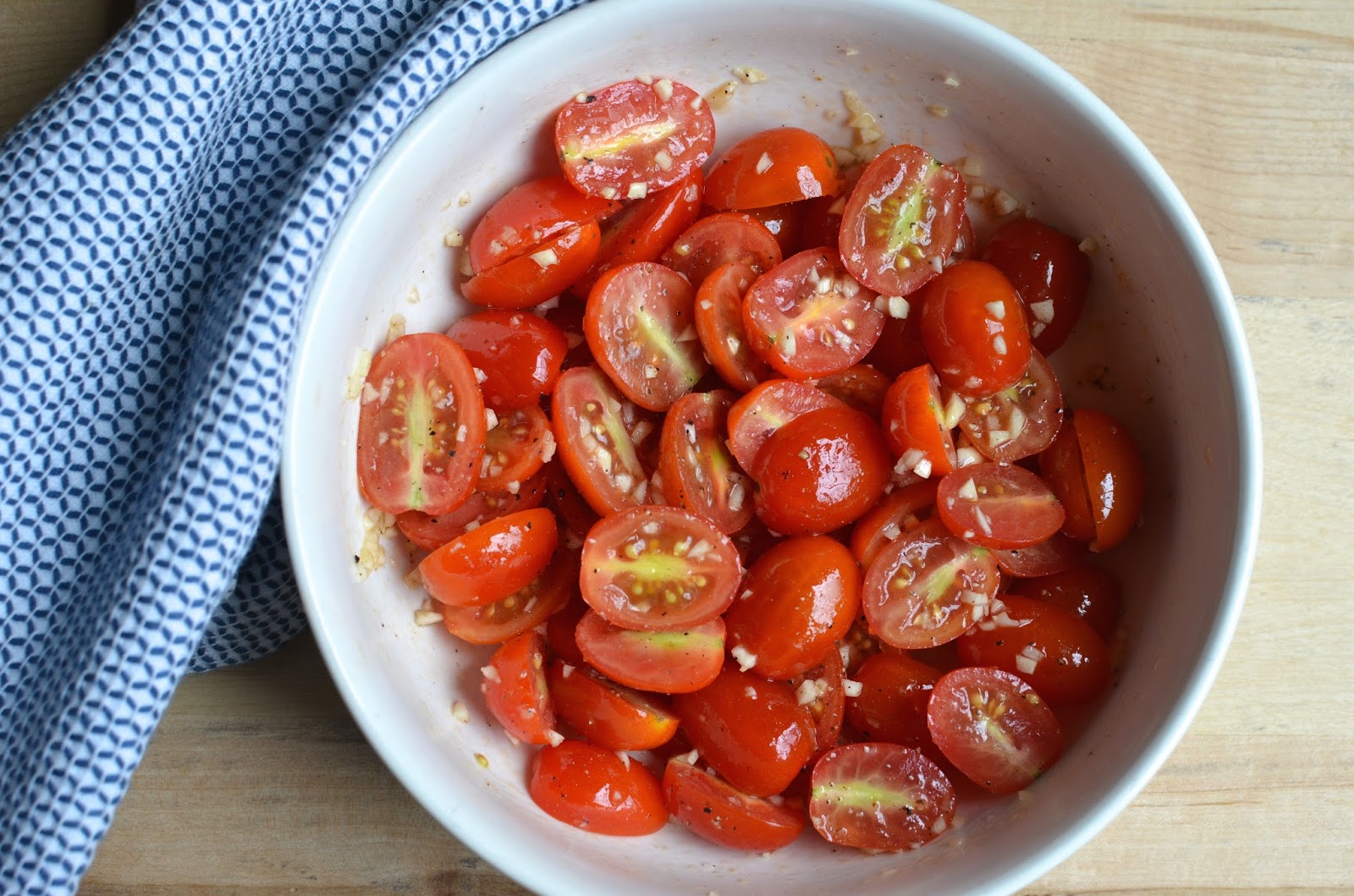 I wanted to add a little more substance and color to the dish so I added edamame. It's one of those things I always have in the freezer because it bulks up so many dishes so well.  Here, it adds color and a complimentary texture to the farro.  It also couldn't be easier to include since I just plop them for a few minutes in the boiling water that I then used to cook the farro in. 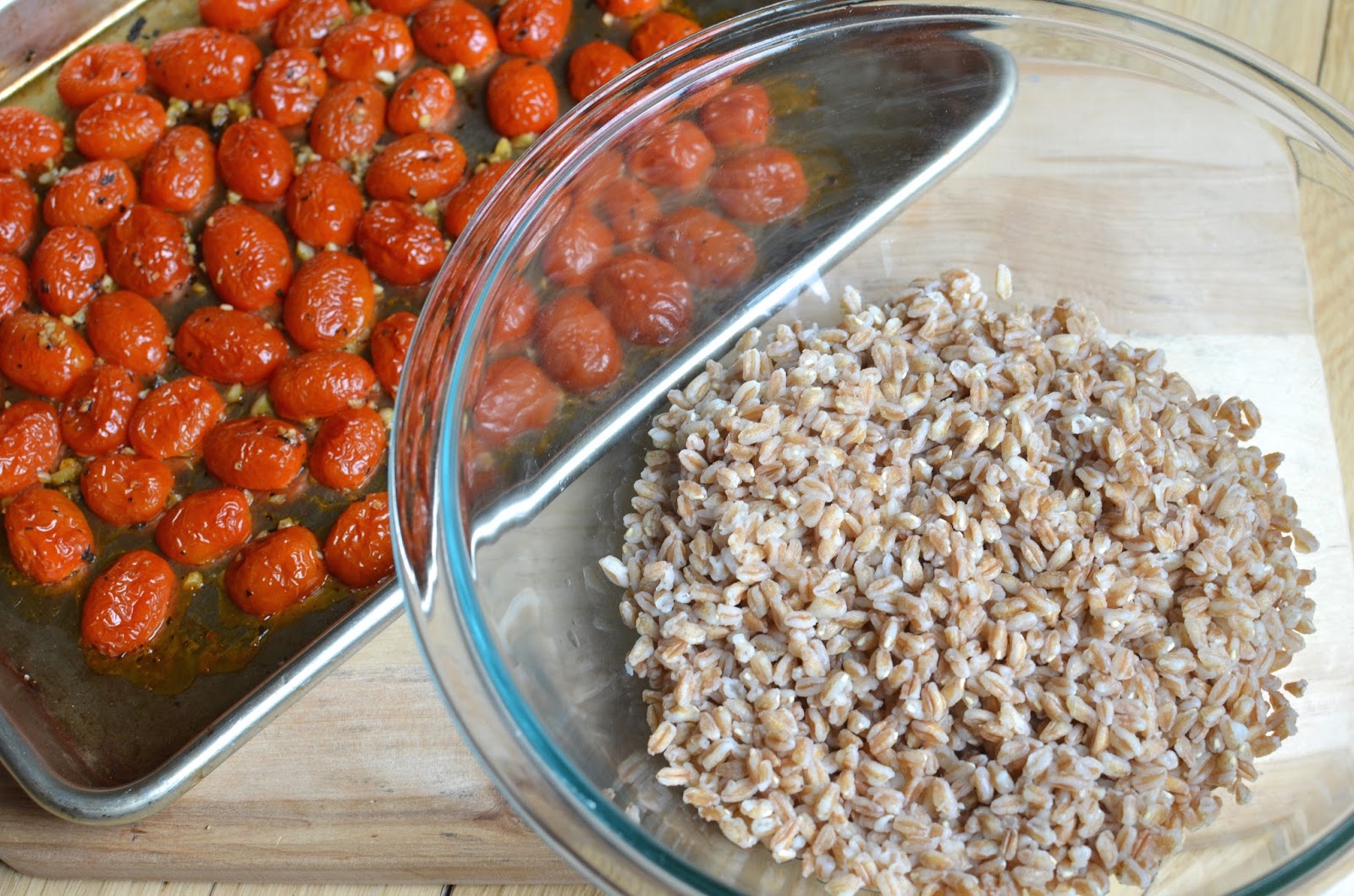 Speaking of the farro, I use Trader Joe's quick-cooking farro, which cooks in about 10-12 minutes.  It's another must for my pantry.  Whatever you use, keep an eye on it and cook the farro until it just begins to bloom - avoid overcooking it so you're sure to get a nice chewy bite from the nutty grain. To bring all the components together - the roasted grape tomatoes, the farro and edamame - is a little sherry vinegar, along with salt and pepper.  A small handful of chopped toasted walnuts finishes it off.  Please don't skip the walnuts, and do toast the nuts first!  The walnuts bring out the grain's nutty chewiness so well and toasting the nuts is an effort that produces a huge payoff in flavor. 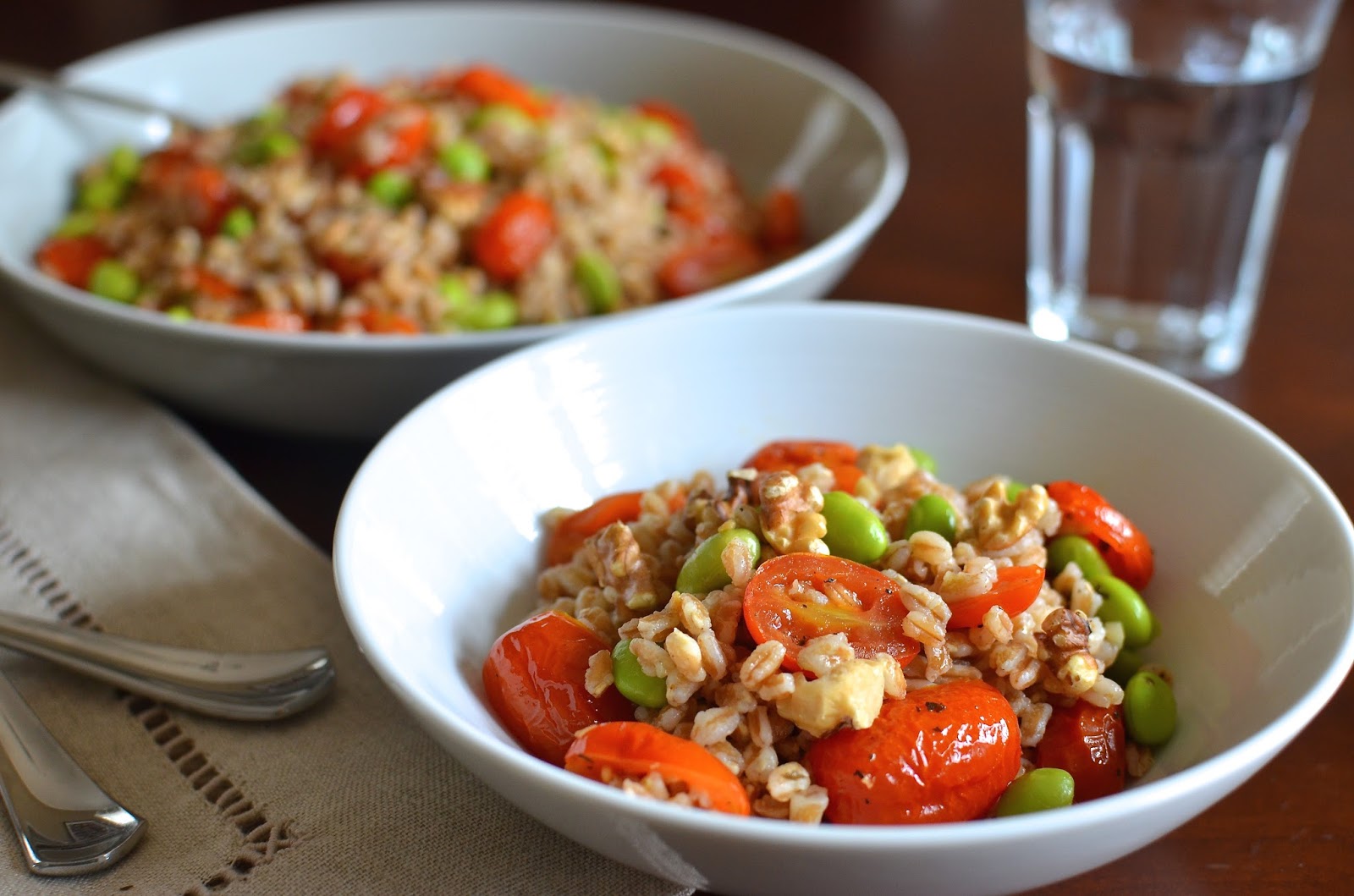 I'd be happy to have this in my refrigerator every day!

If you want to check out the original recipe, you'll see that the tomatoes are roasted with not only garlic but honey as well.  I actually really enjoy the tartness of tomatoes so I opted to skip the honey but I don't doubt that it would be quite tasty with it. 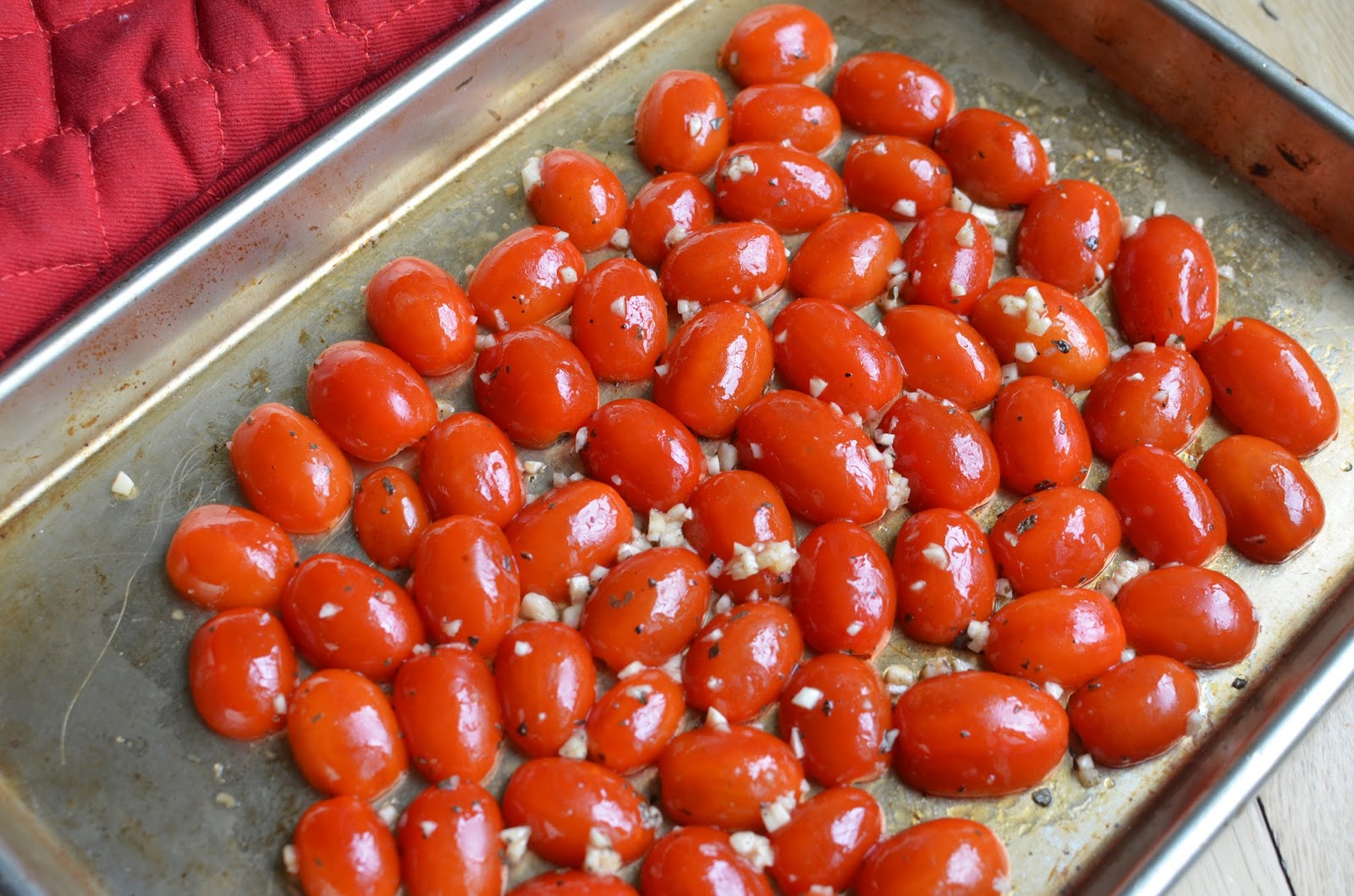 When I usually roast grape or cherry tomatoes, I slice them in half lengthwise and toss them, along with a few cloves of crushed garlic, in olive oil and seasoning before roasting at a high temperature so they break way down and I have a great sauce to toss with some pasta.

In this case, however, I learned a different technique.  You're not going for a sauce and you don't want the tomatoes mushy.  You want to roast the tomatoes until they soften and the skin begins to wrinkle.  This brings out the flavor but the tomato halves are still intact to toss into the chewy farro.  So instead of spreading the tomatoes around a pan, gather them together into one layer so that they are touching; this prevents browning.  I tossed the tomatoes in some olive oil and minced garlic, along with a little salt and pepper.  Since I have some dried basil in my cabinet, I sprinkled some of it on.  Roast at a relatively mild 375 degree oven for just about 20 minutes, or when they look like this: While the tomatoes are cooling, bring some water to a boil.  First, cook the frozen edamame in the boiling water for a few minutes and remove it.  Add farro, cook until done, then drain (I don't rinse it). 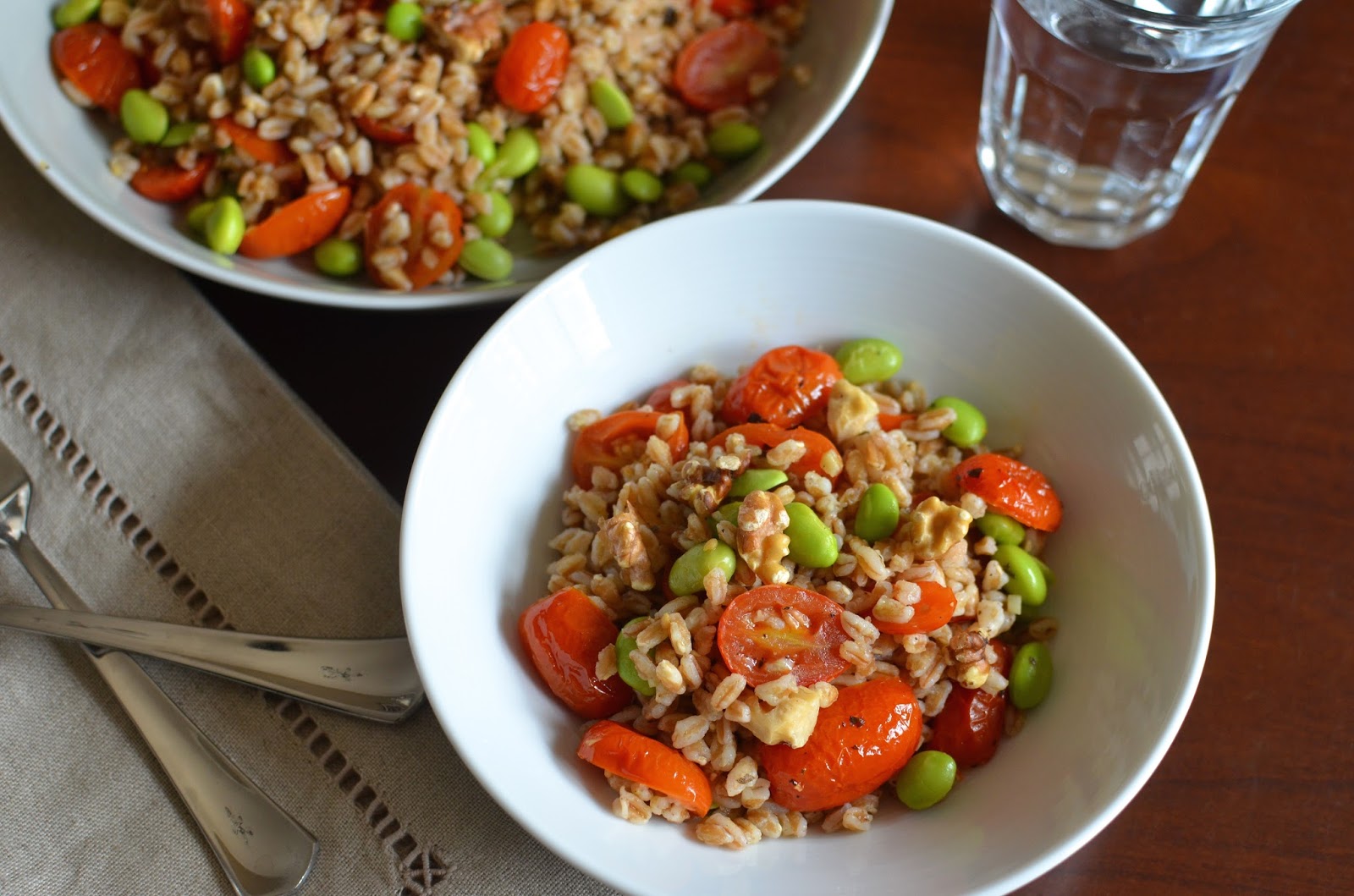 To finish, toss the farro with the roasted tomatoes, edamame, as well as a few splashes of sherry vinegar.  I always reach for red wine vinegar and I now really appreciate how good sherry vinegar is as another option.  It's a bit like balsamic but less sweet, and it's great with tomatoes.  Season everything with salt & pepper, taste to adjust, and finish with a sprinkle of toasted walnuts.  If you like a little cheese for added creaminess and richness, the recipe recommends feta.  And if you want more sweetness, I think some corn would be a good way to go.

I've already made this twice in less than two weeks.  I like that you can eat it at room temperature and that leftovers keep well in the fridge.  Any time I grab leftover grain salads like this one from the fridge, I like to bring it to room temperature or warm it up a bit and then add a little extra sherry vinegar (or whatever the acid may be) to brighten it up.

Update (June 2015): I've been taking this basic garlic-roasted tomato idea and running with it, eating it plain with some fresh basil and tossing it in with other grains. I find that grape tomatoes are easy to get a hold off and usually in good shape throughout the year so it's easy to buy a container and roast them this way.  I love making grain salads and lunching on it for a few days; for variety, I rotate the grain I use (whether it be quinoa, farro, wheat berries, or bulgur as in this case below) and add sautéed or roasted vegetables, using up what I have on hand.  I've been doing just that lately, adding these garlic-roasted tomatoes into the mix. I finish it all off by simply stirring in a few splashes of red wine or sherry vinegar as well as salt and pepper.  It's nutritious and delicious!

In a bowl, toss the tomatoes with olive oil and garlic, and season with a bit of salt and pepper.  Transfer the tomatoes to a small baking sheet, placing the tomatoes cut-side down.  Gather the tomatoes close together, in one layer, so that they're touching. This helps prevent browning.  Bake until tomatoes are wrinkled and soft but not mushy, about 20 to 25 minutes (grape tomatoes may take less time than cherry tomatoes). Remove from the oven and let cool to room temperature.

While tomatoes are cooking, cook farro by bringing a pot of water to a boil.  Add frozen edamame and cook for 3-5 minutes, then remove to a bowl.  Add farro and cook for 10-12 minutes until chewy, then drain (if you're not using Trader Joe's quick-cooking farro and cooking your farro differently, cook as directed and you can add frozen edamame to the last few minutes of cooking before draining).

In a large bowl, combine farro, tomatoes, and sherry vinegar.  Season lightly with salt and pepper.  Toss gently together.  Taste, and adjust seasoning as necessary.  Top with toasted walnuts.  Serve at room temperature or store in the refrigerator until needed.  If cold, I like to bring it to room temperature and add a splash of sherry vinegar before serving to brighten it up.