When I go to the big bookstore (you know the one since there are so few nowadays), I'm always drawn to the magazine racks and to the cooking magazines.  These days, aside from the usual monthly issues, there are all these special edition magazines featuring everything from seasonal cooking/baking to one-pot meals.  I'll find myself flipping through these mini cookbooks and with all the great photography, everything looks delicious.  Every once in a while though, for whatever reasons, something especially calls out to me.  This hazelnut marble coffee cake did that the other day and I just wanted to make it. 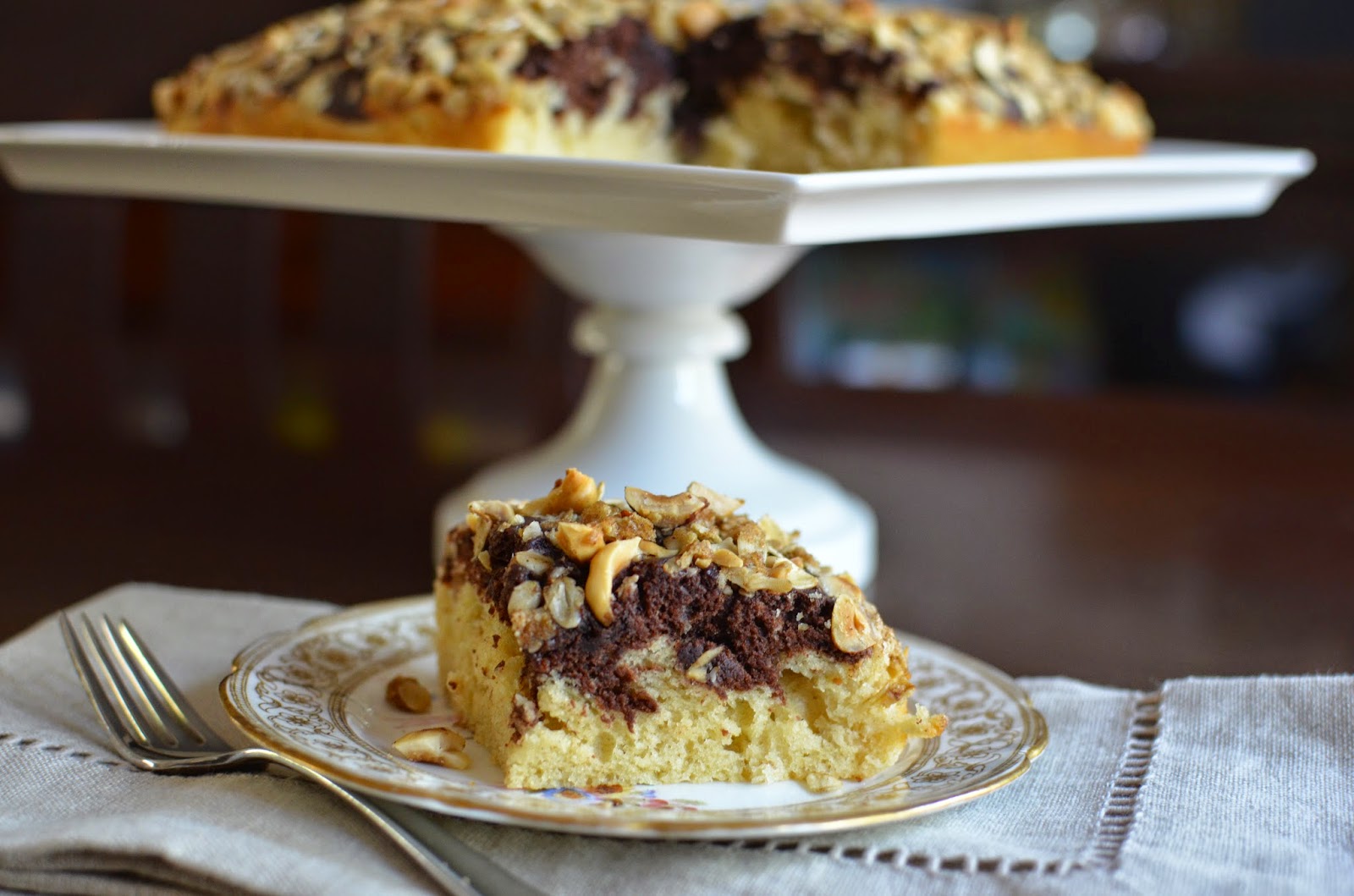 I wasn't really sure what it was that made me want to make this little cake so much.  I supposed we simply like what we like, and this cake has a lot of the characteristics that I like in a cake.  I'm a big fan of basic cakes that don't need frosting; I love hazelnuts and anything with chocolate (the duo/marbled layers really appealed to me).  I've also realized that old-fashioned coffee cakes need to make a serious come back and that crumb toppings are something to swoon over.

As it turns out, this was also something of a light recipe - another thing that appealed to me because ideally, I'm looking for tasty, balanced, treats I can enjoy everyday.  But I have to admit I started second-guessing my decision to try this out when I looked deeper...I started thinking: "Really?  Just 1 tablespoon of butter (never mind that the original recipe uses vegetable oil spread) for the crumb topping?  Light sour cream, 7 tablespoons of water and just 3 tablespoons of canola oil in the cake?" Is that going to taste good? 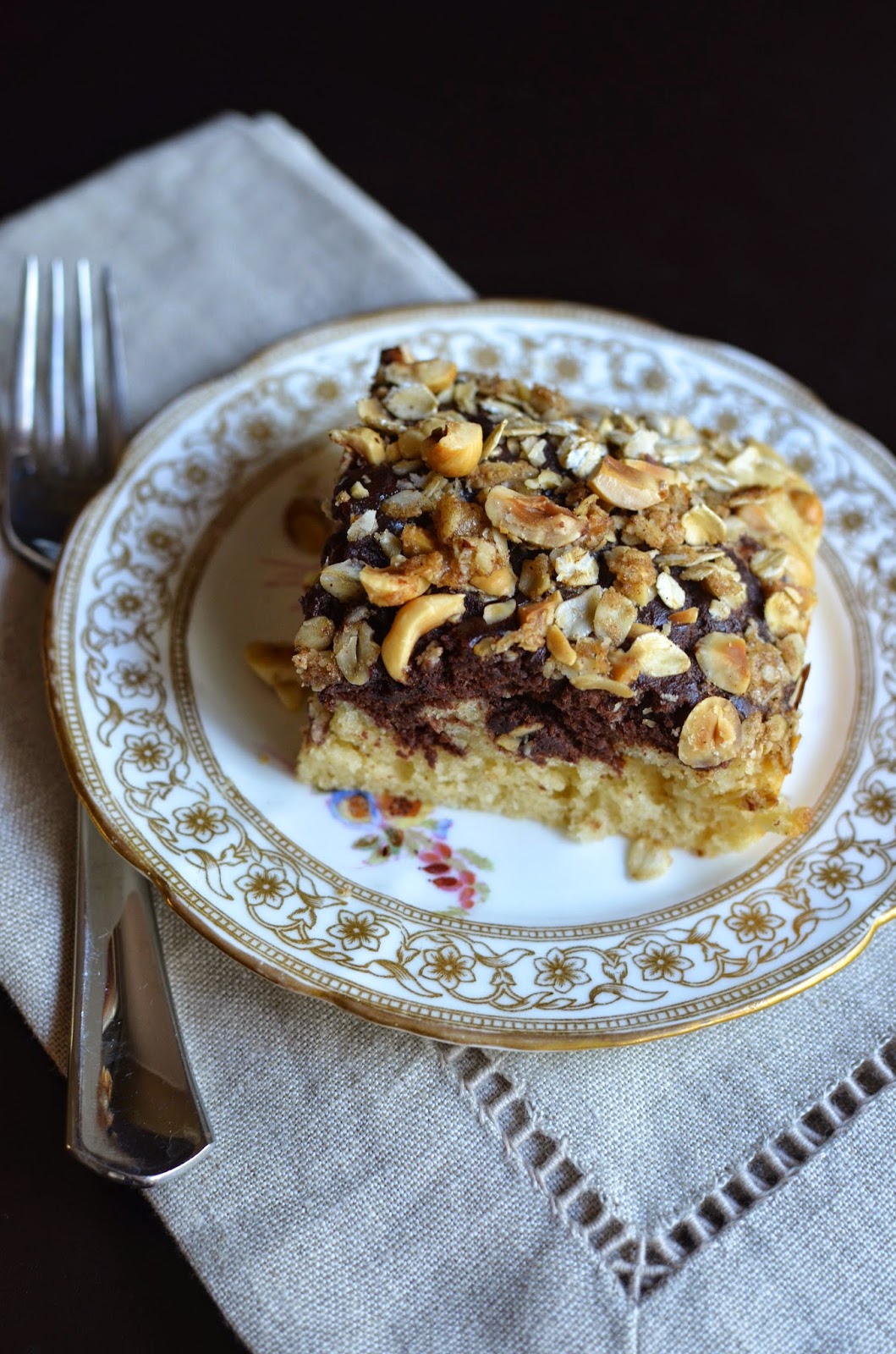 I decided to go for it and give it a try.  The recipe left some room for interpretation as far as using other types of flours and even sugar substitutes.  I stuck with the framework of the recipe but used a tablespoon of butter (as opposed to oil spread) for the topping, an actual egg (instead of egg product, which I've never bought) in the cake, and I choose to substitute half the all-purpose flour with whole wheat pastry flour.  A little extra vanilla extract worked out well, too.

I really wasn't sure this coffee cake would taste as appealing as it looked in the magazine but the good news is it was very good!  The cake is moist and tender, and you can taste the cocoa of the top layer. That really makes a difference, adding some dimension and giving you the feeling that you're eating some hybrid between coffee cake and a marble loaf or light pound cake.  Though the cake itself isn't very flavorful, it goes nicely with the strong flavor of the crumb topping. 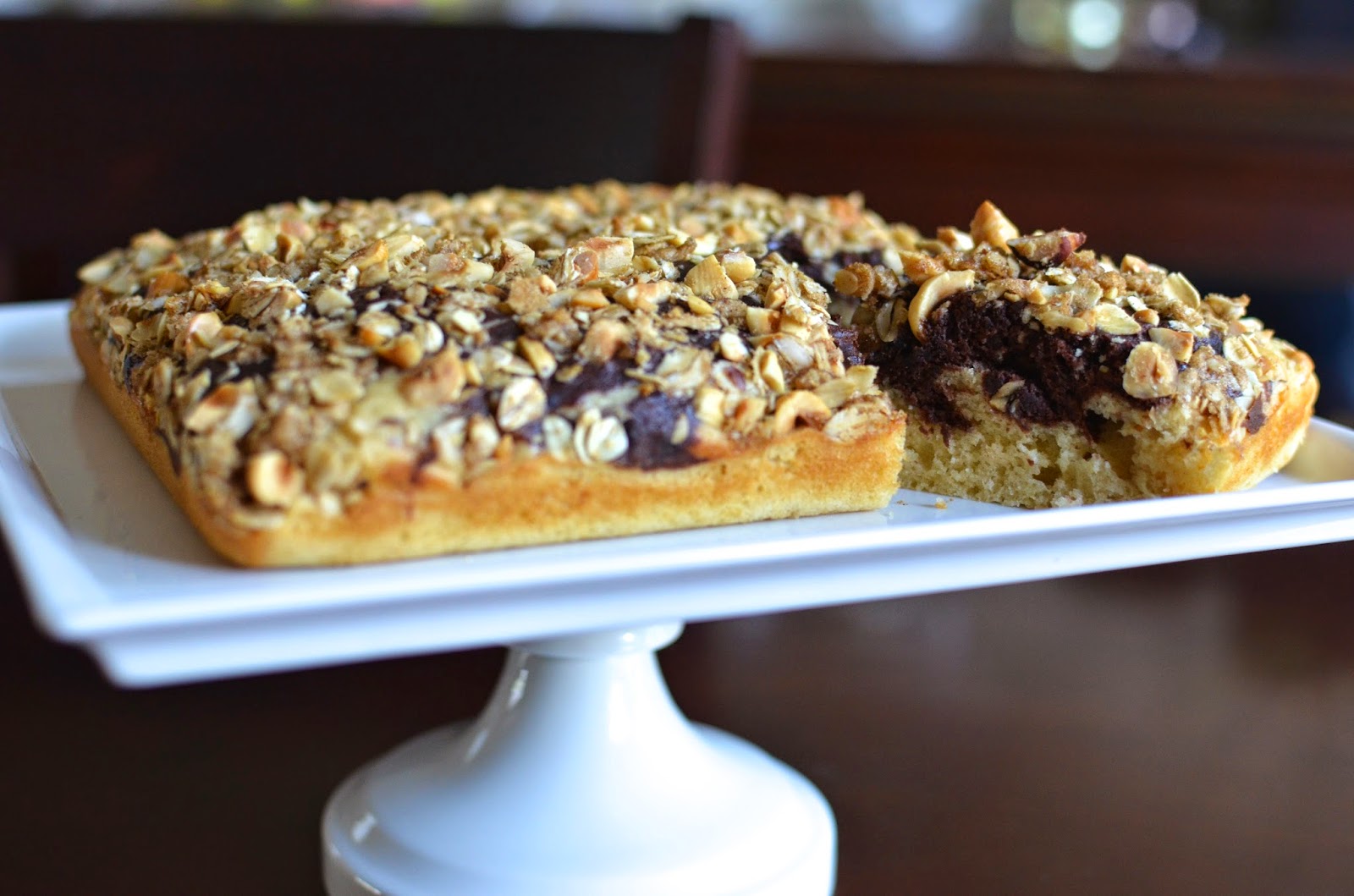 The hazelnuts in the topping packs a punch of flavor.  If you're not a fan of hazelnut, I see no reason not to substitute with something else like walnuts or almonds.  For me, the hazelnuts work really well with the cocoa layer and gives you a ton of flavor in the topping.  And speaking of the crumb topping, I found that just one tablespoon of butter and 1 tablespoon of brown sugar does get the job done here! If you are feeling generous (or a little greedy), I wouldn't discourage anyone from making a bit more topping to go on top of this coffee cake.  Thanks to those flavorful, toasted hazelnuts though, I think it works just as it is. 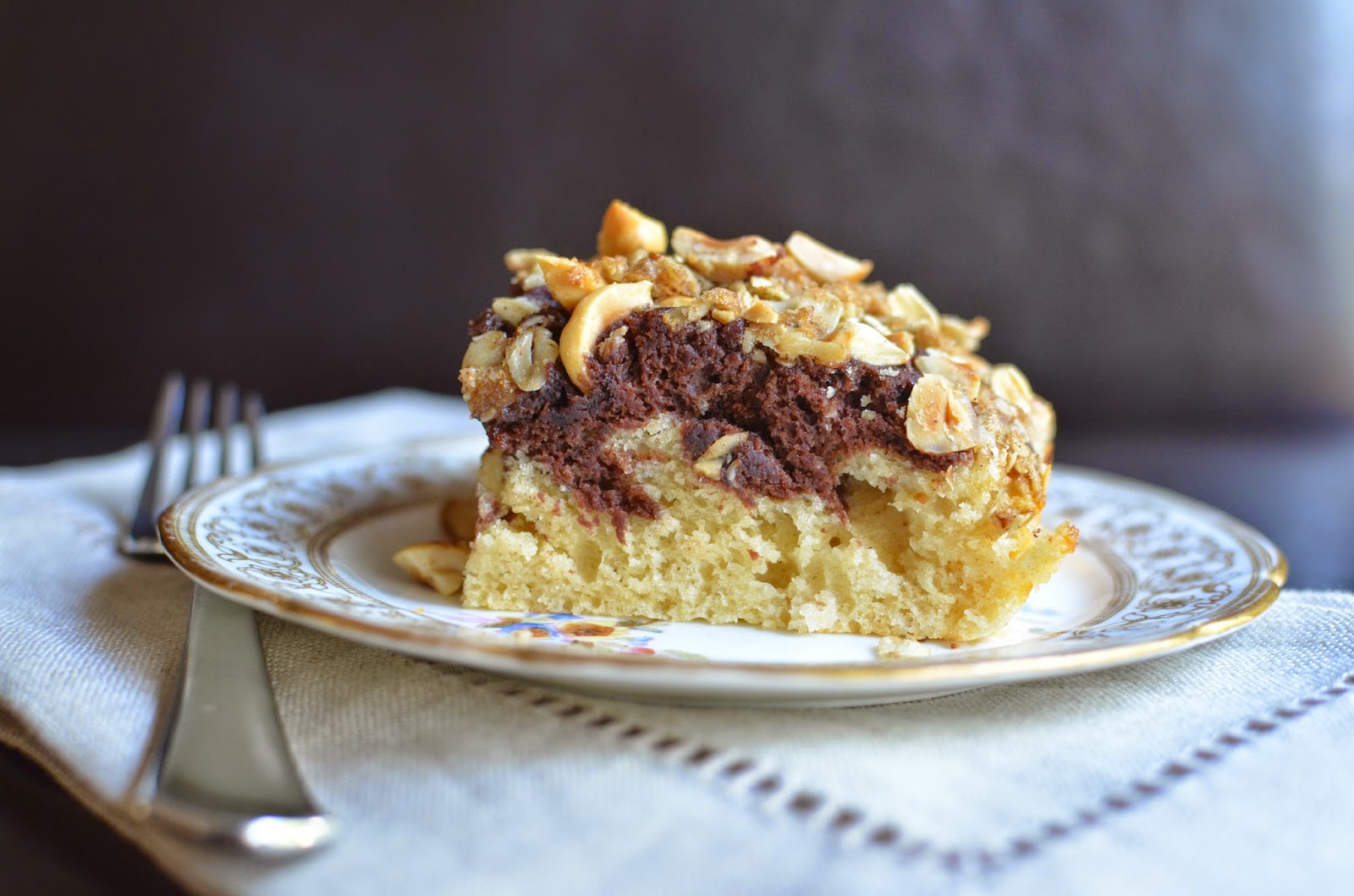 All you need is a cup of coffee...


The streusel or crumb topping for this 8-inch square coffee cake is made with 1/4 cup of oats, just 1 tablespoon each of butter and brown sugar, and a touch of cinnamon.  Not a huge standalone cinnamon fan myself (though it has grown on me a lot in the last few years), there is a something about cinnamon in streusel that is so necessary.  Even the little guy, who isn't a big fan either, says the cinnamon makes it tasty.  It just goes to show that there is a place for everything and that small contributions often make a big impact on the whole!

I won't forget the key player: 1/4 cup of chopped toasted hazelnuts.  Toasting it is a not a step to skip because it really magnifies the flavor and stretches what you're working with. 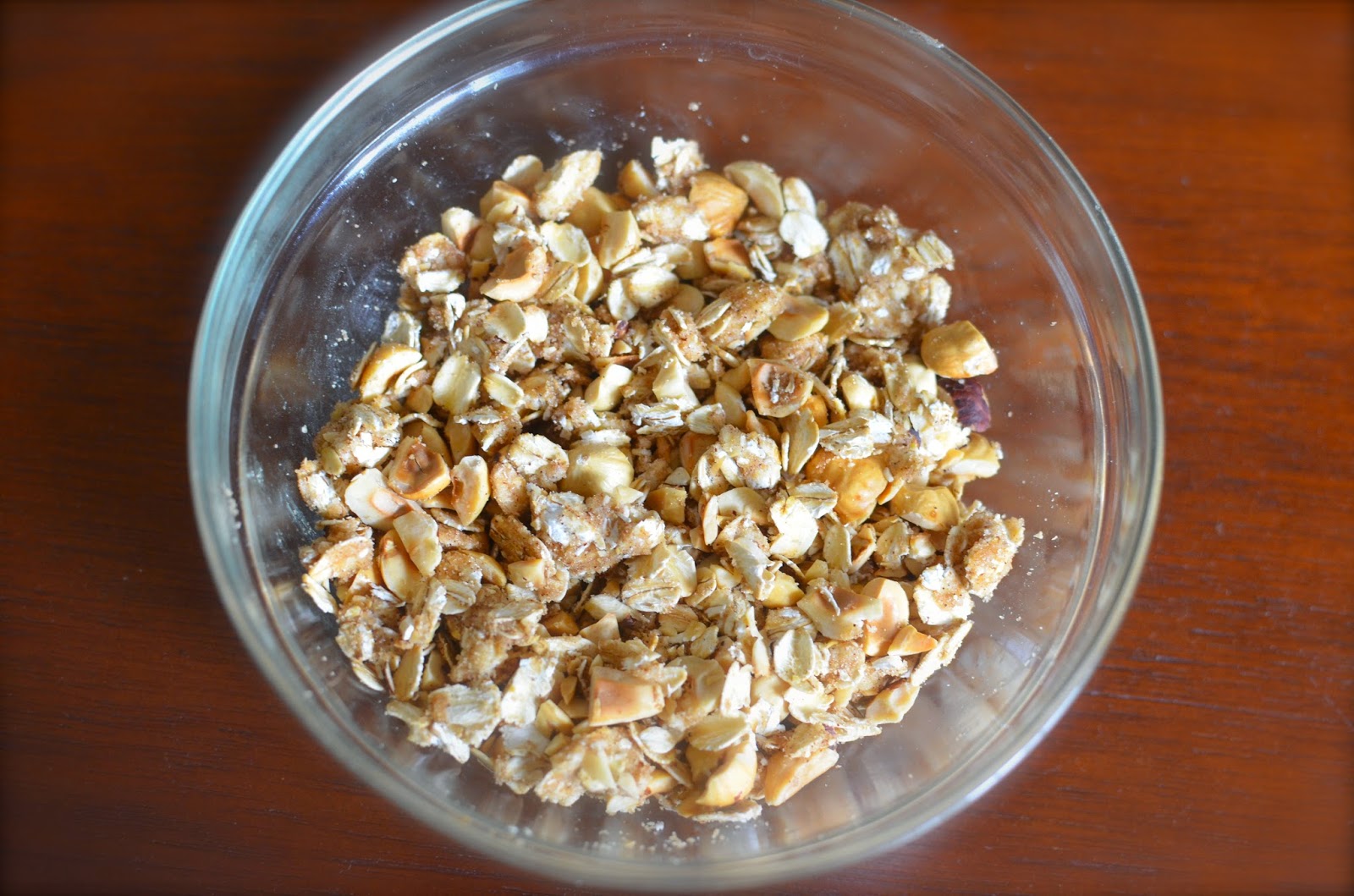 Making this cake, while simply a manual process that doesn't even require a mixer, does require dirtying a few bowls.  After mixing the cake batter, scoop out half a cup of it and stir in some cocoa and milk to make the chocolate layer.  Dollop the chocolate batter on top of the plain and give it a bit of a swirl with a butter knife. 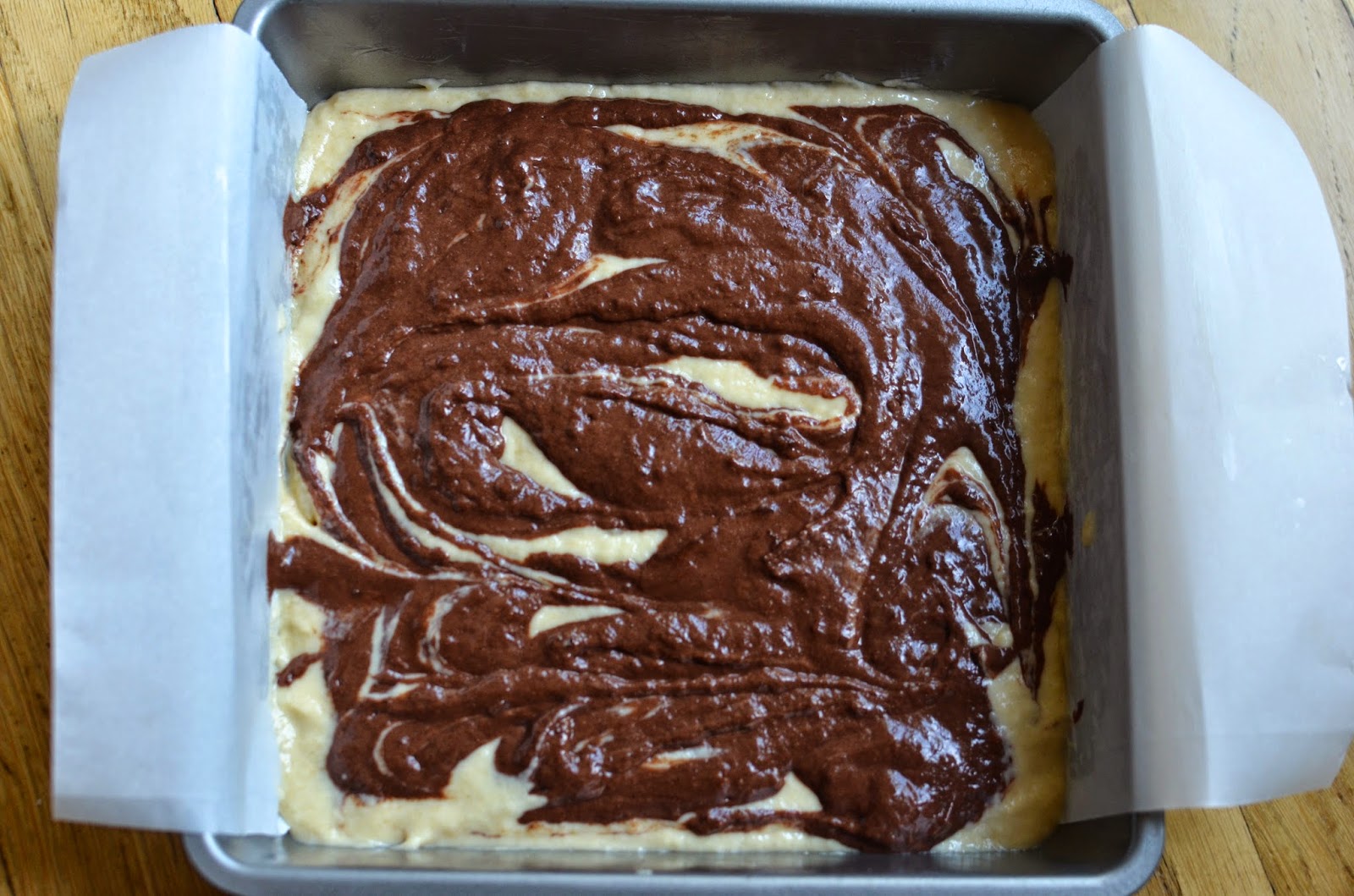 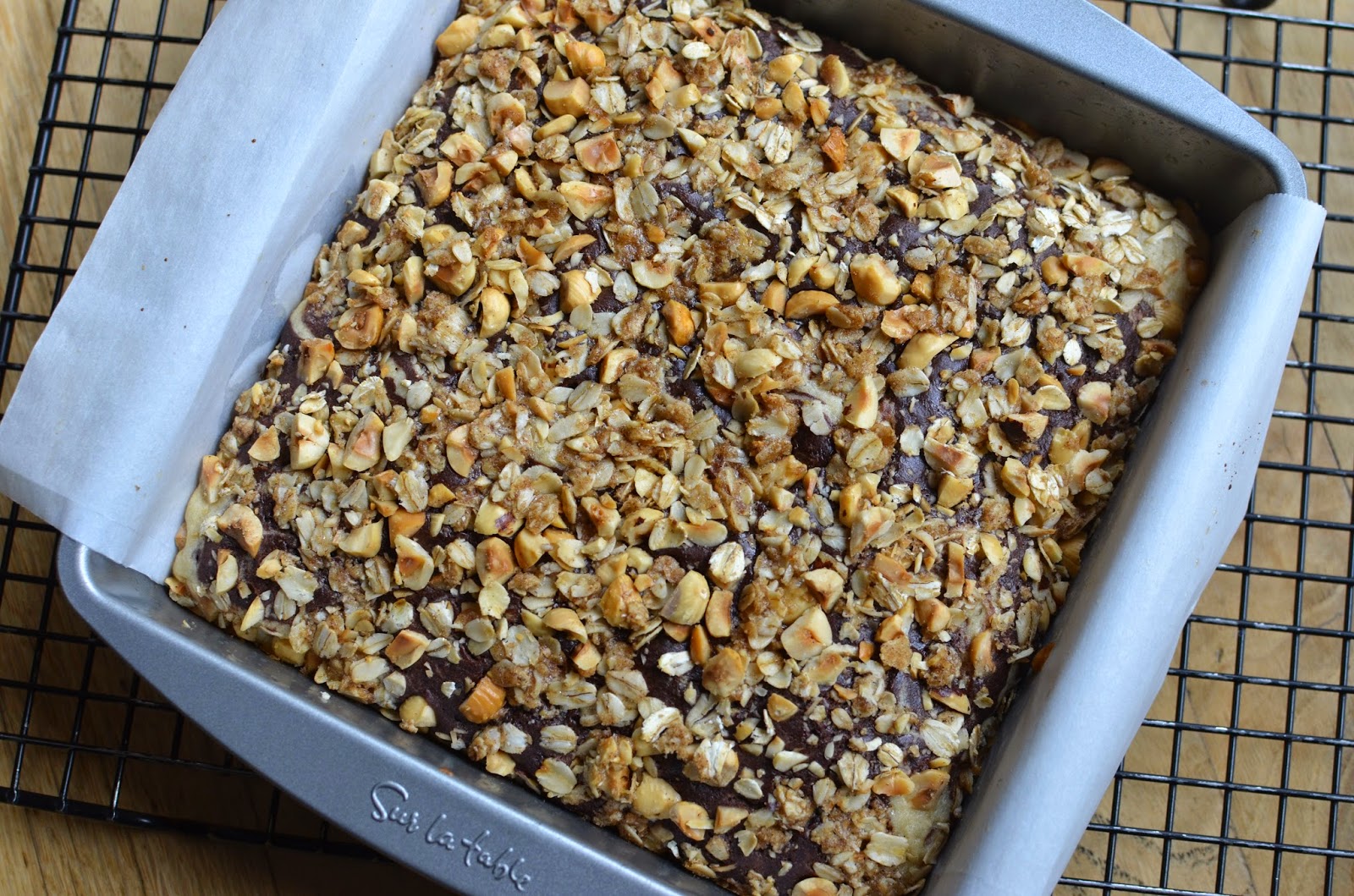 After baking, the top is nice and golden.  Again, you could make a little more crumb topping if you like (I'd stick with the 1/4 cup of hazelnuts and just bump up the rest), particularly if you're serving it to some serious crumb-topping lovers who are looking for it.

The final result of the cake itself was probably more of a two-tone or two-layer effect than a marbled cake.  I think that has partly to do with me being a little generous in making the chocolate layer (i.e., fear of not having enough chocolate).  But in any case, I really liked the contrast and that darker cocoa layer added a subtle flavor that I really enjoyed so it's not just for looks. I'm glad I was drawn to this cake flipping through magazines at the bookstore the other day!

Preheat oven to 350 degrees.  Grease an 8x8 inch square baking pan with cooking spray and line it with a piece of parchment, allowing for about 2 inches of overhang on two sides (for easy removal later).  Lightly grease the parchment paper.

Make topping by stirring oats, brown sugar, and cinnamon together in a small bowl.  Cut in butter with a fork until mixture is crumbly.  Stir in the hazelnuts and set aside.

In a medium bowl, whisk flours, sugar, baking powder, baking soda, and salt together.  In a measuring cup or small bowl, stir the light sour cream, water, egg, canola oil, and vanilla together.  Make a well in the center of the dry ingredients, add the wet ingredients, and stir together until just combined. Remove 1/2 cup of the batter to a small bowl.  Stir in cocoa powder and milk until blended.

Scrape the plain batter into the baking pan and smooth out the top.  It will be a fairly thin layer. Spoon dollops of the chocolate batter on top.  Using a table knife, swirl batter slightly to create a marbled effect.  Sprinkle the top of the batter with the crumb topping.

Bake until cake tester inserted into the center of the cake comes out clean, approximately 20 minutes. Let cool on a wire rack for about 15 minutes, then remove the cake using the parchment overhang. Serve warm or let cool to room temperature on wire rack.  The cake can be stored in an airtight container, at room temperature, for about 3 days.

To bake as a loaf cake: This cake can be baked in a greased 8x4 inch loaf pan.  Place half the plain batter into the pan, followed by half the chocolate batter in small mounds on top.  Repeat with another layer of the plain and chocolate batters.  Swirl batters slightly to create marbled effect and add topping.  Bake for about 35-40 minutes, or until cake tester comes out clean.  Let cake cool for about 10 minutes in the pan before removing.