During the flux of the few weeks surrounding Hurricane Sandy, the idea of making something old-fashioned (which I associate with steady, dependable, and simpler times) appealed to me.  While pretty much stranded at home during the early days after the storm, I spent time re-reading some of my cookbooks.  With no TV or Internet connection (other than our cellphones), my subscription of cooking magazines and old books provided entertainment.  The benefit of revisiting those cookbooks is that I found a bunch of recipes I want to try, or have already tried since. 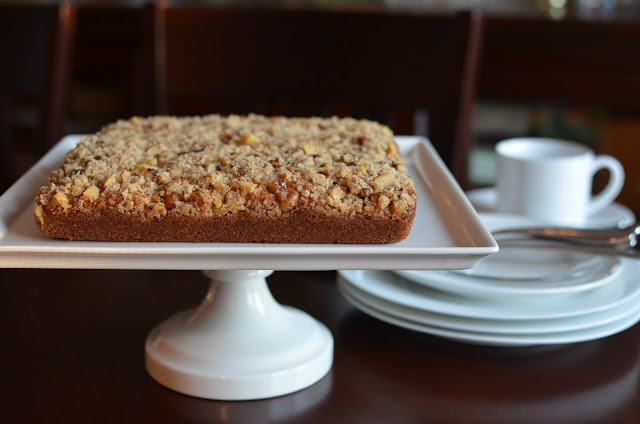 I adapted this coffee cake recipe slightly from a cookbook given to me recently by a friend (thank you, girl!).  It’s a breakfast book, no pictures but recipe after recipe of anything you might consider for your first meal of the day.  When I was looking through it, I kept going back to the coffee cake.  It reminded me of those first cooking classes I took back in high school (or was it junior high school?).  I remember the first things we learned to make in that big classroom kitchen were coffee cake and zucchini bread, both of which were surprisingly good to my green taste buds.
As you probably know, coffee cake has nothing to do with coffee in the sense of being an ingredient or flavor in the cake.  It’s a basic cake intended to be served alongside a cup of coffee.  Most of the time, it has a crumb topping on it and because of that, it’s also called crumb cake.  I like the sound of coffee cake better but I have to say the crumb topping is the vital component to the coffee cake. 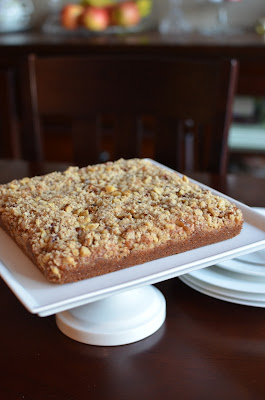 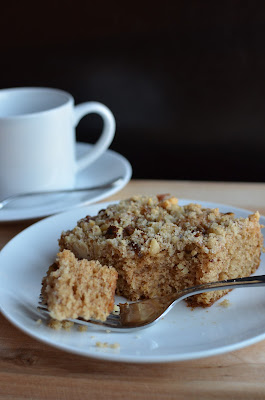 This particular coffee cake is a pretty basic one, flavored mainly with cinnamon and nutmeg – rather appropriate for this time of year, I think.  But the thing is I only enjoy cinnamon and nutmeg (and other spices like ginger and cloves) in careful moderation.  The recipe was more generous than I wanted to be with the spices so on personal preference, I dialed it down a bit.  Luckily, it turned out quite well, with enough presence but without being overpowering.
I like that this coffee cake is nice and moist thanks to the use of oil as opposed to butter, and it keeps well for several days tightly wrapped.  The crumb topping is made with chopped walnuts mixed together with some flour and cinnamon-sugar.  It provides a nice bit of crunch and extra sweetness against the soft, moist cake. 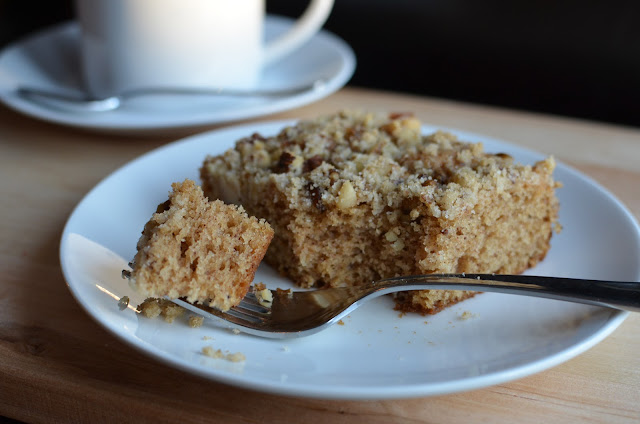 Coffee cake may not be something I'd crave often but it was a nice old-school treat that I really enjoyed making and eating.  There’s something nostalgic about it.
So let's bring back the coffee cake once in a while!  Brew a pot of coffee and have a good sit-down with someone you enjoy spending time with.  Or make one and wrap a few pieces up (it travels quite well) for someone you know who’d appreciate a little treat to go with his/her daily cup of joe.  It's a great make-ahead also, if you are thinking about food for that busy Christmas morning.  Make this the day before and it needs nothing more than knife and fork the next day.  Oh, and coffee, of course...

I cut the recipe for this coffee cake in half and baked it in an 8-inch square pan instead of a 9x13 inch one.  It's nice and moist so you can definitely make it the day or night before you plan to serve it.

Lightly spray the pan with cooking spray and, though not absolutely necessary, I like to line it with a piece of parchment allowing about 2-inches of overhang on 2 sides.  Spray the paper lightly as well.  This way, you can remove the cake and transfer it to a large plate or platter very easily. 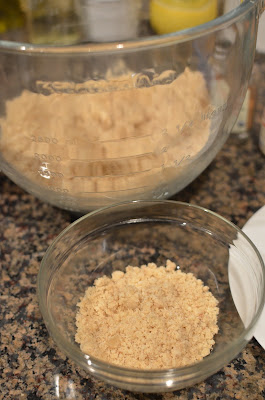 Stir in the chopped walnuts and you have the crumb topping for the coffee cake. 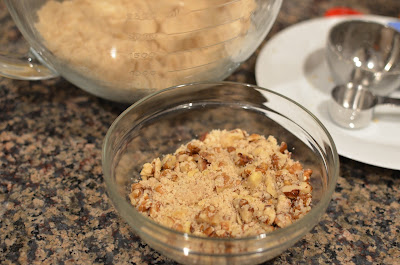 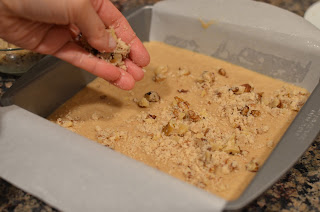 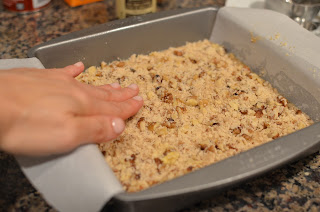 Bake in a 325 degree oven for about 35-40 minutes, or until a toothpick inserted into the center of the cake comes out clean.  Let cool on a wire rack.  If you're making it the night before like I did, leave it in the pan and cover the completely cooled cake tightly with foil.  The next morning, I lifted the cake out using the  overhang and set the cake on a platter. 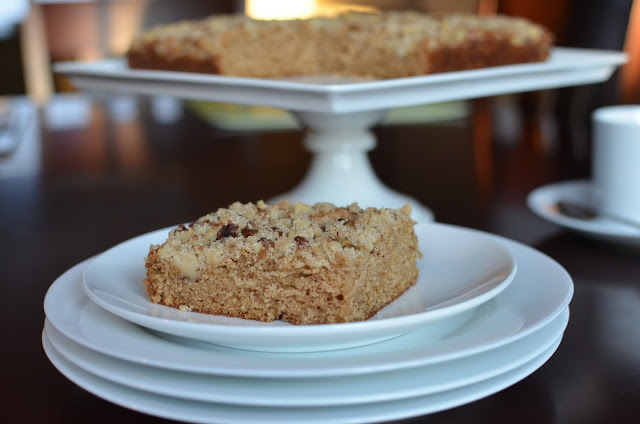 It really is great with coffee!

Preheat oven to 325 degrees.  Lightly spray an 8-inch square baking pan with cooking spray and line it with a piece of parchment, allowing about 2-inches of overhang on two sides (for easy removal later).  Lightly spray parchment paper.

In the bowl of a stand mixer, combine flour, salt, 1/2 teaspoon of the cinnamon, brown sugar, granulated sugar, and oil.  Beat with the paddle attachment until blended.  To make the crumb topping, transfer 6 tablespoons of the mixture to a small bowl and stir in the chopped nuts.  Set this aside.

To the remaining mixture, add baking powder, baking soda, the remaining ¼ teaspoon of cinnamon, nutmeg, egg, buttermilk, and vanilla extract.  Beat until smooth.  Spread batter evenly into the prepared baking pan, using a rubber spatula to smooth over the top.  Sprinkle the reserved topping evenly over the batter and lightly pat it down.

Bake for approximately 35-40 minutes, or until a toothpick inserted into the center comes out clean.  Let cake cool on a wire rack.  To remove, lift the cake out using the parchment overhang.  This coffee cake stores quite well, staying moist for several days.  Store it at room temperature, tightly wrapped.