I'm going to be forced to be concise today.  As I type this, my computer is moving at a snail's pace and making funny noises; I'm just hoping to complete this post before it crashes completely.  It's just one of many things going on lately.  This past month has been a full one - filled with good things like birthdays, family gatherings, school activities, and weddings, as well as some not-so-great things like dealing with home maintenance issues (let's just say Roto Rooter was involved). 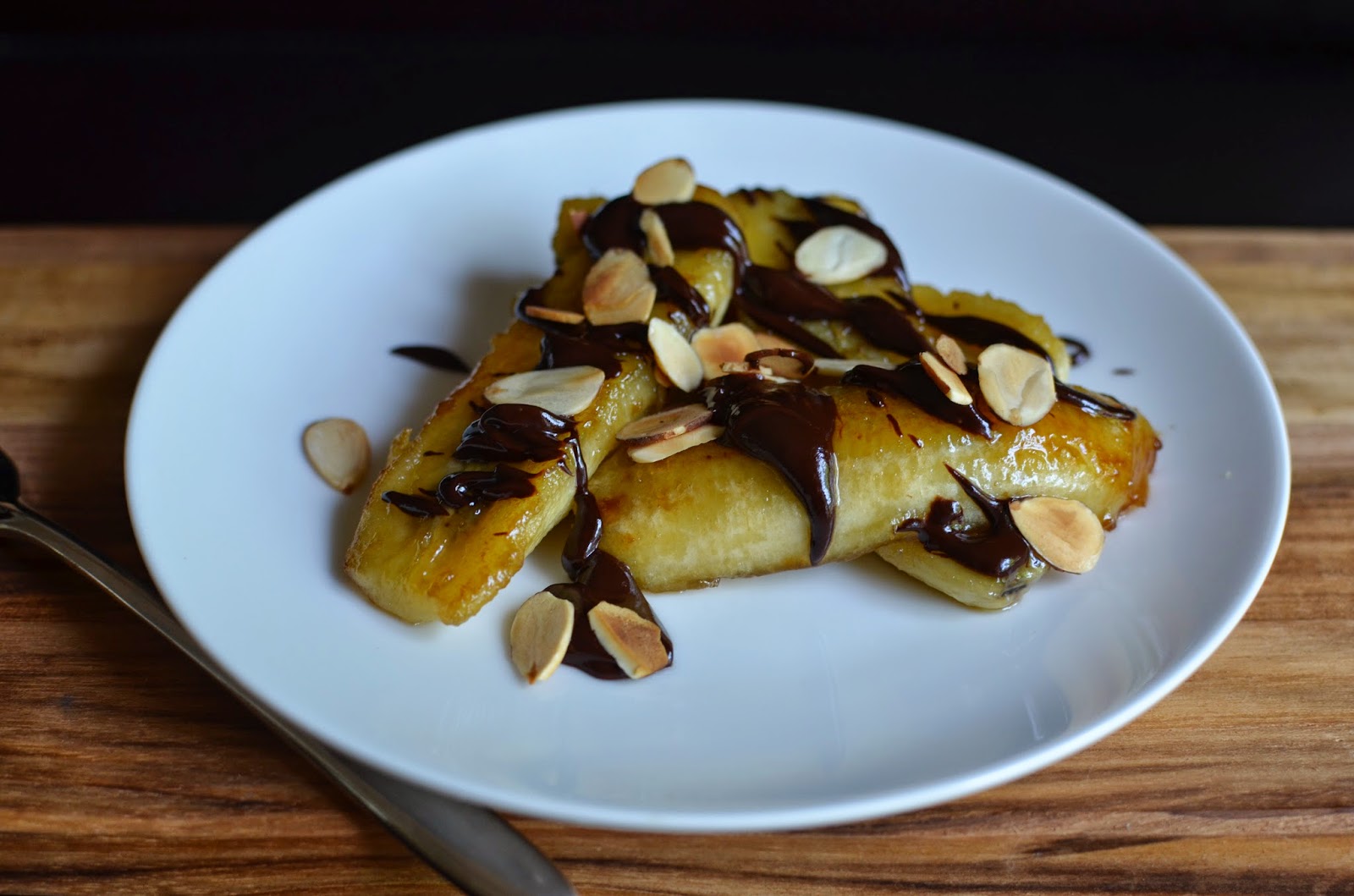 With so much going on, this dessert was a belated Father's Day treat for my husband.  The little one (he might be 9 now but I'll still be calling him my "little one" for a while) helped me make this caramelized banana split and it was a hit with my banana-dessert-loving husband.

It's really simple to make by slicing up a slightly under-ripe banana, coating the pieces in some brown sugar and caramelizing them in a little bit of butter.  Top it with a drizzle of chocolate sauce and toasted almond slices.  And I don't know about you but I can't envision anything called "banana split" without ice cream so I added a scoop of neapolitan ice cream alongside. 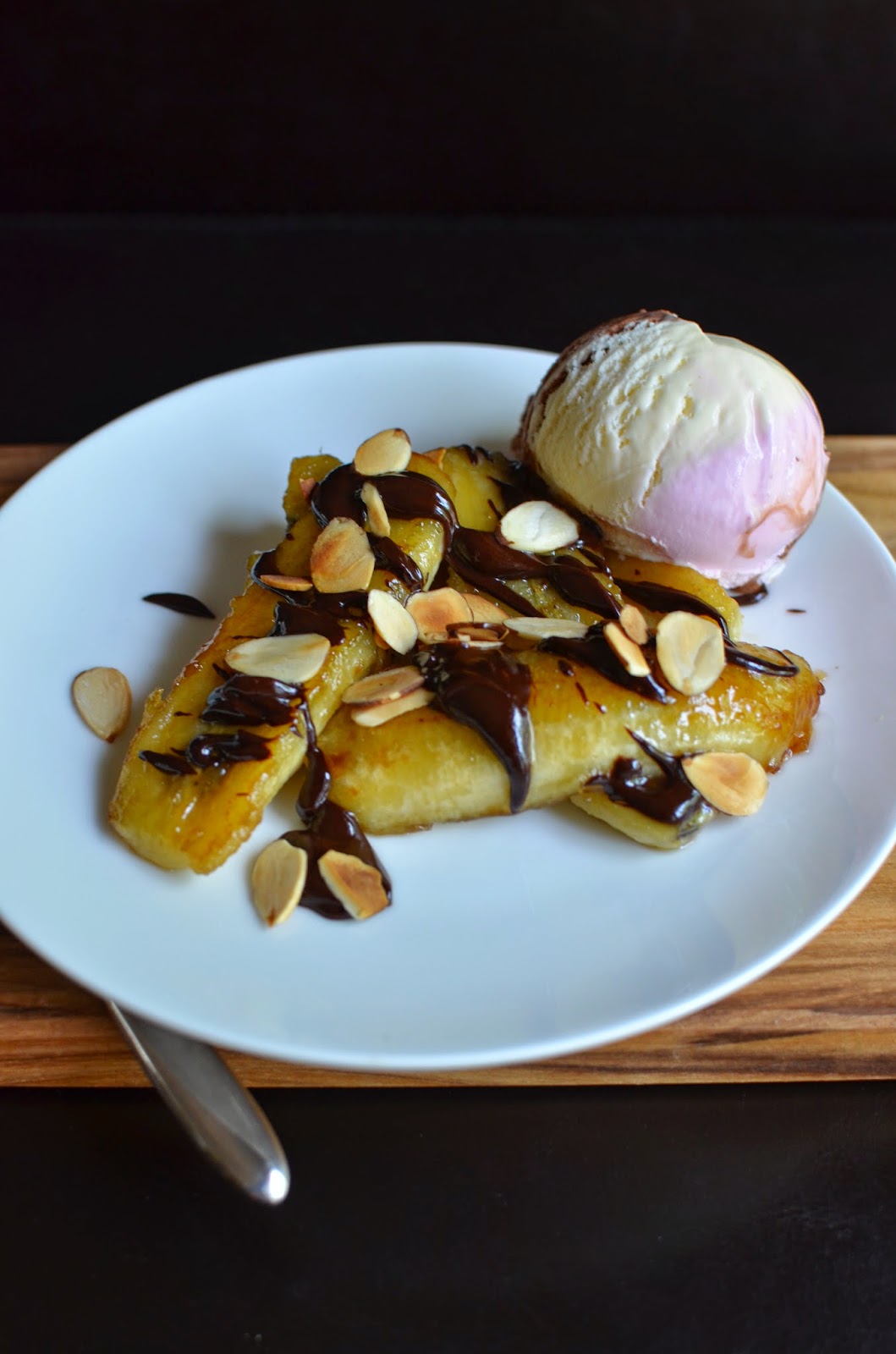 It's a fun, tasty, as well as quick-and-easy dessert to whip up for anyone who love bananas.

I got the idea to make this for my husband from an old show of Giada De Laurentiis' that I happened to be watching one morning while doing my morning stretches.  She calls it "fried banana split" but I think caramelized banana split is a better description.  Wonder of wonders, she didn't serve it with ice cream!  I suppose it's perfectly good without it but banana splits need to have ice cream in my mind.  You don't want to pass up on that satisfying contrast between the warm caramelized bananas and the cold ice cream. 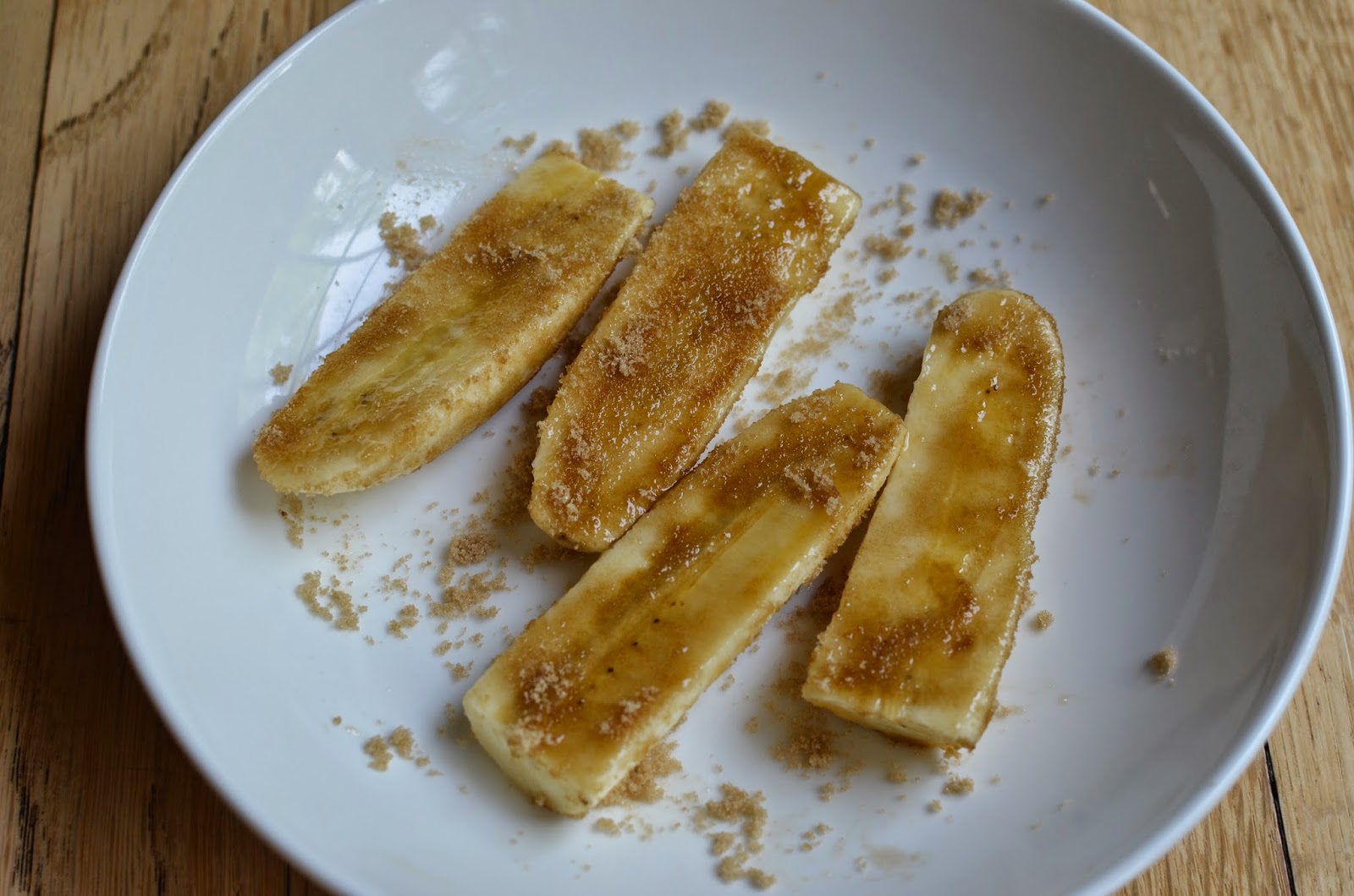 I thought it would be nice to get my son involved in making this for his dad.  He helped me coat the bananas in the brown sugar, mix up the ganache for the topping, and serve it up (you want to keep the actual cooking for the adults since we're talking about sizzling hot caramelized sugar in the pan).  In this recipe, go with slightly under-ripe, firmer, bananas to begin with since you're heating and softening it in the hot pan.

For the chocolate sauce, it's basically ganache but using water instead of cream.  I used the microwave to melt some chocolate and instead of stirring in cream to loosen it into a ganache sauce, I followed the recipe, using water.  I think it works really well; there's plenty of richness and flavor already and you just want a few sharp slashes of chocolate and you get that. 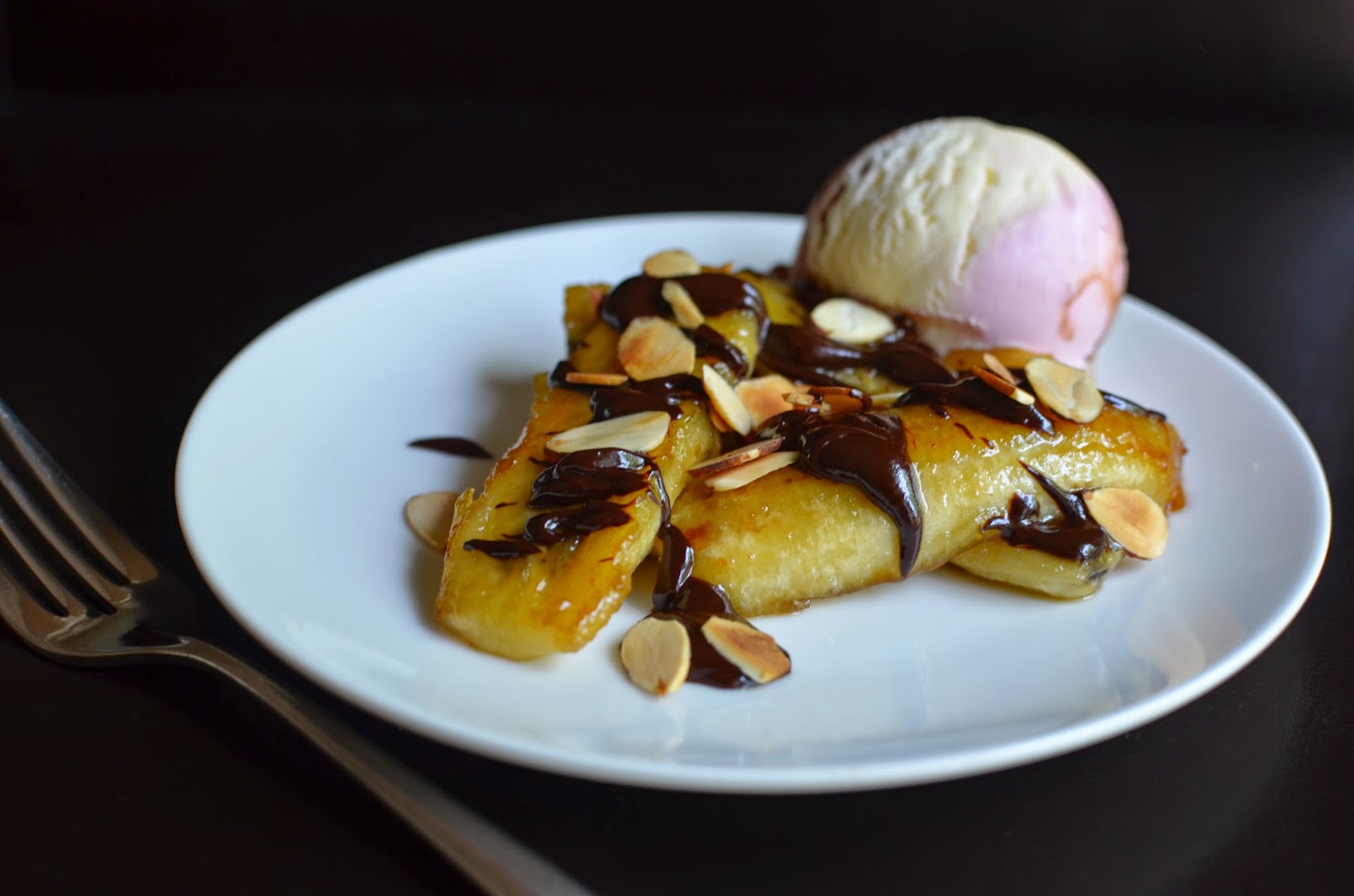 My husband has been a fan of banana desserts far longer than I have.  Last year around this time (I just realized it was really right around the same time when I checked just now!), I attempted a simple banana tarte tatin recipe that didn't work that well.  This caramelized banana split is even easier and I have to say, it panned out a lot better.

My husband said the taste reminds him of the banana tart at Union Square Cafe in NYC.  We have a little history with that restaurant and that particular dessert.  We used to eat there all the time back in our dating days and hadn't been in years...but about a month or so ago, we actually took another trip down memory lane and went back there for dinner.  The banana tart was still on the menu and we enjoyed it thoroughly!  There is nothing like good food, great conversation, and a wonderful dessert to cap it all off.
Happy Belated Father's Day!

To make chocolate sauce, place chocolate in a microwave safe bowl.  Heat on half-power at 20 second increments, stirring well after each, until just melted.  Add water and stir to combine until smooth.

In a plate, coat both sides of the bananas in the brown sugar.  Melt butter in a skillet over medium-high heat.  Place bananas in the pan, cut side down, and cook just until the sugar has caramelized and you have a golden brown crust.  This happens pretty quickly so keep an eye on it and try not to over-cook the bananas or they will be too soft.  Carefully flip the bananas over with a spatula (avoid using your fingers because the caramelized sugar is very hot) and cook for another 30 seconds or so until browned.

Divide the bananas between 2 plates.  Top with a drizzle of chocolate sauce, almond slices, and a scoop (or two) of ice cream.  Serve immediately.