As much as I love chocolate, it might come as a surprise that a simple, plain chiffon cake is quite possibly my favorite cake of all the ones I've made via this blog.  Okay, maybe I'm not quite ready to commit that it's my absolute favorite but it's right up there.  It is delicious, so ethereally soft and moist, and easy to make too.  It's the kind of everyday cake I like to enjoy often.
So when I received my long awaited copy of Martha Stewart's Cakes, I was naturally drawn to a relatively simple chiffon cake recipe.  Martha's version is a banana chiffon and as my husband pointed out, "anything baked with banana is going to be good", so I decided to take it for a spin.  I've often thought about making an orange or lemon version of the chiffon cake but have been really reluctant to mess with a good great thing.  But I trust Martha.  I've been watching her shows and learning from her since I was a teenager. Before I discovered David Lebovitz and the world of food blogs, it was just Martha.

Seeing the banana chiffon cake also got me thinking about banana bread and our favorite one which has chocolate chips in it.  So instead of just a banana chiffon cake, I decided to add chocolate! Maybe I am too predictable after all.  I grated about 2 1/2 ounces of semisweet chocolate on a box grater and folded it into the batter, creating lovely little specks of chocolate throughout the cake.  In essence, this banana-chocolate chiffon cake I ultimately ended up with is a terrific combination of two of my favorite recipes:
This chiffon cake... 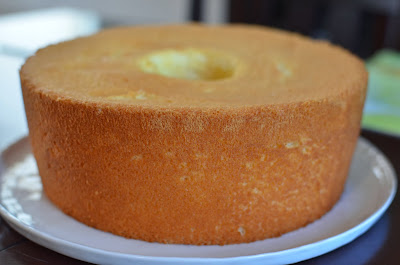 A recipe from an episode of America's Test Kitchen that grabbed my attention. I've made it at least a dozen times and it has never failed me.  It is infinitely moist, soft, tender, with the pure flavors of eggs and vanilla.  I simply adore it (and many of my friends and family do, too)!

...and this banana bread with chocolate chips 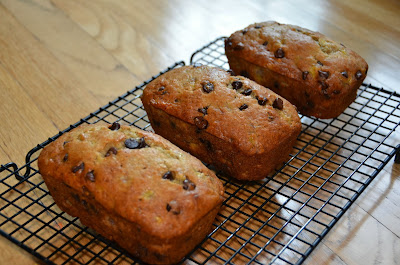 This recipe, slightly modified, came from A Homemade Life by Molly of Orangette.  She is such a great writer and a source of great recipes. This banana bread knocked our socks off the very first time I made it; my husband is a huge fan.  I often buy yogurt just to make this bread and I try to bake extra to freeze because it holds up so well.  After this recipe, whenever I think banana bread, I think chocolate as well.

But back to today's cake...imagine the same fluffy texture and tenderness of a chiffon cake, infused with a gentle banana flavor, and a lingering taste of chocolate in every bite.  The free aromatherapy that comes from baking this banana-chocolate chiffon cake is pure bonus.  Taste-wise, everything is soft and harmonious. 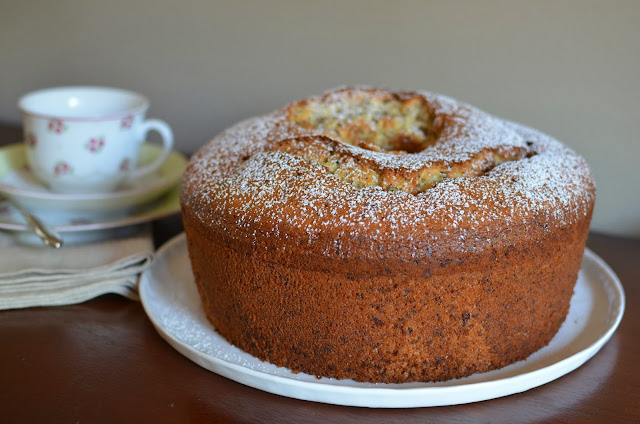 I really liked how this cake came out.  When I say "soft", I mean that the essence of a chiffon cake is intact in this version.  It's light and simple and while the taste of both the banana and chocolate are clearly present, it's more of a mild presence and not overwhelming. 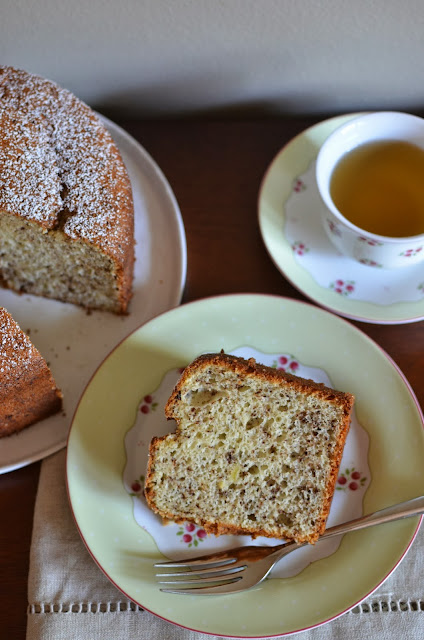 I will most definitely be making this cake again.  It was well worth shaking things up a little and trying something new.  Discovering little pleasures like this cake reminds me of why I love doing this little blog.  It's made my life a lot more delicious and homemade than it would have been otherwise.

* And speaking of this blog, I've moved over to my own domain!  I finally ditched the "blogspot" part of my address and moved to my own little home. I actually managed to do it myself, which is quite a feat, believe me.  I patted myself on the back with a slice of this cake.  And as always, thank you for stopping by! *

This recipe makes a substantial, lofty chiffon cake baked in a 10-inch tube pan.   You could easily get 16 servings out of it.  It's great for a crowd but since it holds so well - staying moist for several days - having a large cake is not a problem!  It's a funny thing but when it comes to chiffon cake, I love it so much that I almost always find myself going back for a second slice!  Knowing that ahead of time, I try to be mindful to cut myself a small first slice.

Everything that goes into this cake is laid out below.  It starts with 7 large eggs, separated.  I actually used 6 extra-large ones.  One ripe banana is all it calls for.  That creates an extremely fragrant cake but the one banana isn't so much that it weighs down the lofty texture of the chiffon. Wet ingredients include water and canola oil instead of butter, which is partly responsible for the moisture and softness and why it keeps so well. 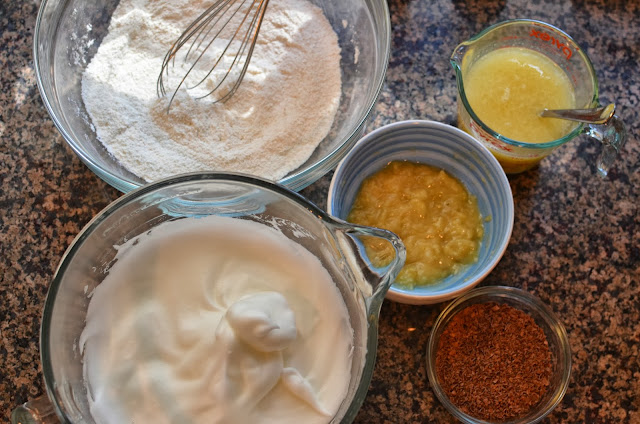 Martha's recipe uses all-purpose flour instead of cake flour.  That worried me a bit because I was concerned about the cake not having as fine or soft a texture as I'm used to but I decided to trust Martha.  I figured the addition of the banana probably helps explain the choice of flour.  You combine the dry ingredients and then the wet.  Pour the wet into the dry, and whisk together until smooth. 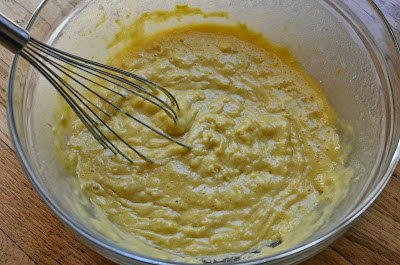 In addition to adding chocolate, I made a few small tweaks to the recipe, mostly using the tips I learned from America's Test Kitchen's recipe that has worked so well for me when it comes to making chiffon cake in the past.  I took a couple of tablespoons of sugar from the dry mix and added it to the whites.  I find that adding a little sugar in the whites really gives them more stability and you have an easier time whipping them to the ideal just-stiff peaks.  (On the general subject of sugar, I know we're supposed to follow  the recipe when baking but I do tend to keep my sugar measurements on the scant side, and that applied in this case too.)

Then, I whisked about a quarter of the beaten whites into the batter to lighten it up before gently folding in the rest of the whites in about 3 installments.  Near the end, I add the grated chocolate.  This is the major addition I made to Martha's recipe.  I grated approximately 2 1/2 ounces of semi-sweet chocolate using the largest opening on a box grater.  I didn't want the chocolate to be overwhelming so I didn't go with cocoa powder.  I've seen angel food cake recipes with grated chocolate incorporated into it and I like the idea of having specks of chocolate in this cake.  It adds just enough of a chocolate note and doesn't make it overly rich. 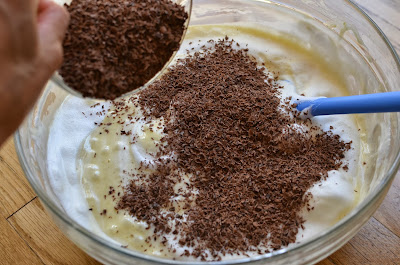 All done - pour the batter into an ungreased tube pan (I love that you don't need to treat your baking pan at all when making chiffon cakes) and bake it in a 350 degree oven for about 50-55 minutes, or until a cake tester comes out clean. 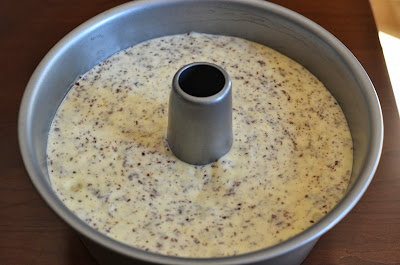 And this is what it looks like when it's done.  Now, you must invert the cake and let it cool completely, upside down.  Since my tube pan doesn't have legs to stand on, I save a Pellegrino water bottle just for the job. 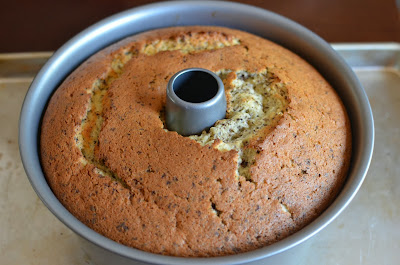 It takes about 2-1/2 to 3 hours for the cake to completely cool.  Run a knife around the cake to release it from all its sides and turn it out onto your serving plate.  The crust of the cake is pretty dark so a little dusting of confectioners' sugar on top looks nice before serving.

Slice into the cake and it is soft and spongy within.  Chiffon cakes, including this one, are so moist that you can hear it when you dig your fork into it!  You see (and taste) the specks of chocolate throughout and you can spot a small piece of banana here and there while the flavor and aroma permeate throughout the whole cake.  It's pretty heavenly, in my opinion! 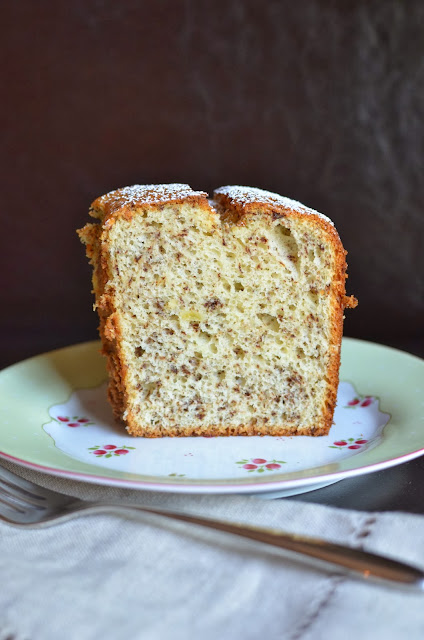 If you love chiffon cake and banana bread as much as I do, I highly recommend you give this a try!

Preheat oven to 350 degrees.  In a large bowl, whisk together the flour, 1 cup plus 6 tablespoons sugar, baking powder and salt.  In a medium bowl or large measuring cup, whisk together the yolks, oil, water, and vanilla.  Add mashed banana and stir together.  Pour the wet ingredients into the dry and whisk together until just smooth.

Place egg whites along with cream of tartar in the bowl of a stand mixer.  Whip with the whisk attachment on medium-high speed until it reaches soft peaks.  Continuing on medium-high, gradually add 2 tablespoons of sugar, and whip the whites until they are just stiff and glossy.

Whisk 1/4 of the whipped egg whites into the batter to lighten it up.  Then fold in the remaining whites, in 3-4 installments.  Avoid over-folding so do not fully incorporate one installment of whites before adding the next.  When you are about halfway done with the final installment of egg whites, add grated chocolate and fold altogether until just combined.

Pour the batter into an ungreased 10-inch tube pan.  Bake for 50-55 minutes, or until a cake tester or toothpick inserted into the cake comes out clean.


Turn the cake upside down (over a bottle if your pan does not have "legs") and let cool completely (about 2 1/2 to 3 hours).  Remove the cake by running a knife around the pan, angling the knife towards the pan to try and leave the crust intact on the cake.  Set cake on serving plate and dust with confectioners' sugar, if desired.