Shrimp with lobster sauce (because I love Chinese takeout)

No surprise, I love Chinese food.  It's part of who I am, after all.  I was born in Hong Kong and lived there for the first eight years of my life until my family and I moved to the States (to Brooklyn, to be exact). Growing up, I always felt so lucky to have another heritage, to know another culture. Specifically, I'm thankful to have inside knowledge of the delicious food of my background because, for me, it always comes down to food!

I love authentic Chinese food and growing up, my grandfather was somewhat of a professional home cook and made all types of dishes that I can't even name.  Somehow, he made amazing food using the most affordable ingredients.  He made dumplings, dim sum, noodles, dessert soups, and everything in between.  I don't think I realized how lucky I was.  My mother is a good cook, too.  I was never hungry for long. Somewhat ironically, I also adore Chinese-American food or what I think of as "Chinese takeout". They're dishes I never ate (or heard of) as a child.  Yet the appeal is very strong.  I can't resist taking a peek at the Chinese-American offerings at a mall food court, and neither can my mother.  I think the sweetness of many of those dishes has something to do with the appeal. The fact that there's usually a good amount of spice and a tendency for these dishes to be fried or bathed in sauce might also have something to do with it.

So you can imagine that when I heard about The Chinese Takeout Cookbook, I had to check it out!  I quickly bought myself a copy after seeing lots of easy recipes for dishes I'd like to make at home. Most of them call on a familiar rotation of Chinese cooking pantry items, many of which I already have.

I don't know if you feel the same way but I find myself with less and less desire to eat out lately. Instead, I'm drawn to the kitchen to cook and to the dining room table to eat with my family.  Part of the reason for that is I've learned that cooking really is key to eating better and healthier.  I want to feel good after eating instead of feeling weighed down like I often do when eating out. And eating at home is all the better and more fun when I can make restaurant-favorites that are far lighter and just as tasty, if not more so, than what we'd order for takeout. 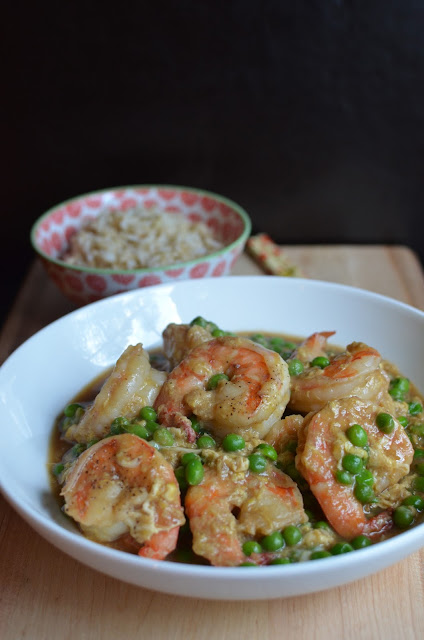 This dish is an example of that.  Shrimp with lobster sauce is one of those Chinese takeout dishes that I love.  It's the first thing I made from the book and I've made it about four times now so I thought I'd share it here.  The thing is, I love a good sauce!  This one is not sweet (I use enough sugar for baking so I try to limit it in savory cooking) and I like that it's not a rich, heavy brown sauce that comes with many typical Chinese takeout dishes with protein.  As you probably well know, there's no lobster in this dish.  The name has something to do with the fact that the sauce resembles a kind that's used to serve over stir-fry lobster at Cantonese restaurants.

I absolutely love shrimp as an adult but funny enough, I didn't like it much at all as a child.  It showed up fairly often on our dinner table and for some reason, I always remember my mother serving stir-fried shrimp with celery...and I hated celery as a kid!  Celery and I have become friends now (though I still dislike it raw) but it was a major turn-off for me then and I associated shrimp with it. 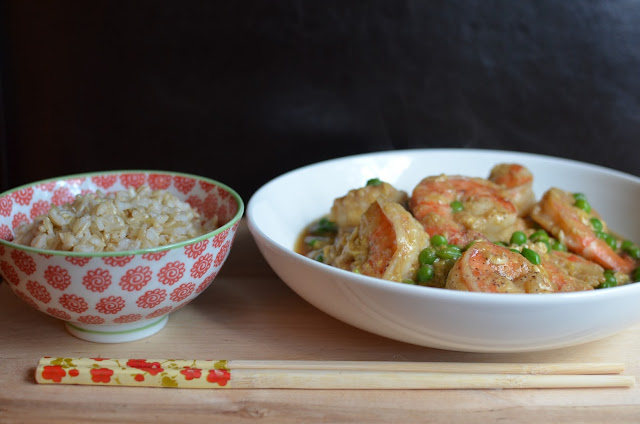 There's no celery in sight in this dish but I did add peas.  I keep several bags of petite peas in the freezer and toss it into many things I cook, and I did that here.  It's a good way to bulk up the dish a bit, too.

The recipe reminded me that some versions of shrimp with lobster sauce contain fermented black beans and ground pork.  It's good that way, too - I particularly like the ground pork - but I left both of those ingredients out to keep the dish simple and light.  I do throw in an extra egg and make a little extra sauce.  Just make sure you have plenty of rice to soak it all up with!  I love a chewy, nutty brown rice with this.  My husband and I have become big fans of this for dinner.  It's easy and quick to make - if you have shrimp and some classic Chinese pantry ingredients on hand, you're in business!  If you 're a fan of this classic Chinese-American dish like we are, I hope you give it a try for yourself.  It just might end up being a part of your regular dinner rotation since it's that easy and that tasty!


I made a few adjustments to the original recipe from The Chinese Takeout Cookbook.  As I mentioned, I eliminated the Chinese fermented black beans. It's a fairly common ingredient in Chinese cooking and they do add a ton of flavor to seafood and meat dishes but it probably isn't something most of us have around.  So to keep things simple, and since I also prefer this dish with a milder flavor, I skip the black beans.

You could also add half a pound of ground pork into this dish.  That's nice for us carnivores and makes for a heartier dish but I also leave it out to keep it light and again, simple.

On the flip side, I added peas and used 2 eggs instead of 1.  I also make a bit more sauce just to make sure I have enough!

When it comes to the shrimp, I've used the spectrum between jumbo tiger shrimp to large shrimp right out of the bag from my freezer.  Obviously, the better quality the ingredients, the better the end product, but it's all good.  I'm a big fan of easy-peel shrimp and keep a bag in my freezer at all times and I don't hesitate to use that here.
As far as the other part of the equation, the sauce, it starts with chicken stock and it's thickened with a cornstarch slurry.  The sauce is flavored with garlic and ginger, as well as soy sauce, oyster sauce, and Chinese rice wine.  I use oyster sauce all the time in my stir-fry.  I consider it my "secret ingredient" because when mixed with a cornstarch slurry, I've essentially got a flavorful sauce that needs little else.  Until I recently started following actual recipes for these Chinese dishes though, I never used Chinese rice wine, or Shaoxing wine, before (my mother never did either)!  The closest substitute is dry sherry but it's worth the $4 investment for a bottle of Chinese rice wine (look for the red labeled bottles) because it'll last you a long time and is a recurring ingredient in many Chinese takeout recipes.

Here's the recipe I use after my tweaks - hope you give it a try!

Shrimp with Lobster Sauce
Adapted from The Chinese Takeout Cookbook

In a measuring cup, stir together the chicken stock, soy sauce, rice wine, and oyster sauce.  Set aside with the cornstarch mixture.

Heat a large nonstick skillet (or wok) over medium high heat with about a tablespoon of oil.  Add shrimp and cook for 1-2 minutes, or until shrimp is just beginning to curl and turn orange in color but are not completely cooked through.  Remove shrimp to a plate and set aside.

Add remaining tablespoon of oil to the pan, stir in garlic and ginger and cook for 20-30 seconds until fragrant.  Stir in the chicken stock mixture, followed by the cornstarch slurry.  Bring to a simmer, gently stirring the sauce to avoid clumps.  Let sauce thicken for one minute.  Add the peas and shrimp into the pan.  Slowly pour in the beaten eggs while gently stirring so that the egg feathers into the sauce.  Season with pepper, to taste.  Transfer to a serving bowl and enjoy immediately with plenty of rice!