I finally made bread!  It's been on my list of things-to-try for quite a while now after being inspired by many posts I've seen of wonderful homemade loaves.  After making pizza dough and the brioche pretzels, working with yeast became much less mysterious and intimidating.  So much so that I finally felt ready to tackle homemade bread myself...

So, please...meet my first attempt at actual bread-making - my, shall we say rather "rustic" looking, loaves of semi whole wheat bread! 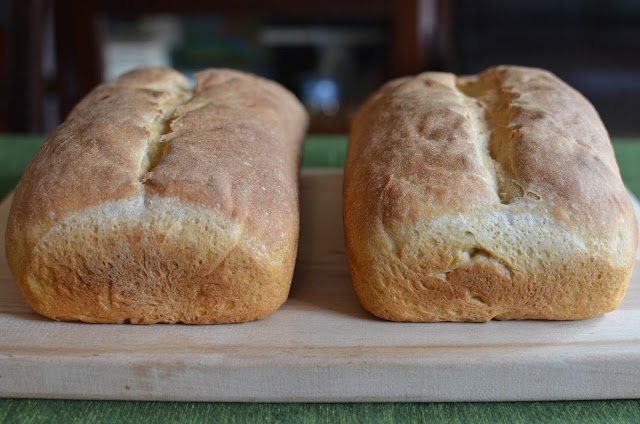 Despite my love of white bread, I decided to go with a whole wheat combination because it's what my family and I generally eat these days.  I used a recipe from The Kitchn, which calls for an equal mixture of whole wheat and all-purpose flour.  I opted to use white whole wheat flour, which is what I have on hand and like to use for recipes calling for whole wheat.  I like that it's less assertive, milder, than typical whole wheat but offers all the same nutritional benefits. This is just my third experience working with yeast and I have to say I'm in awe with the process...watching the dough come alive, expand, and ultimately transform into something nourishing. I have a ton to learn but I've been surprised that working with yeast is a whole lot less "scary" than I thought it would be.  I suppose I've always assumed it would be extremely difficult, with little room for error.  I know my first loaves certainly need work but it was a rewarding experience. 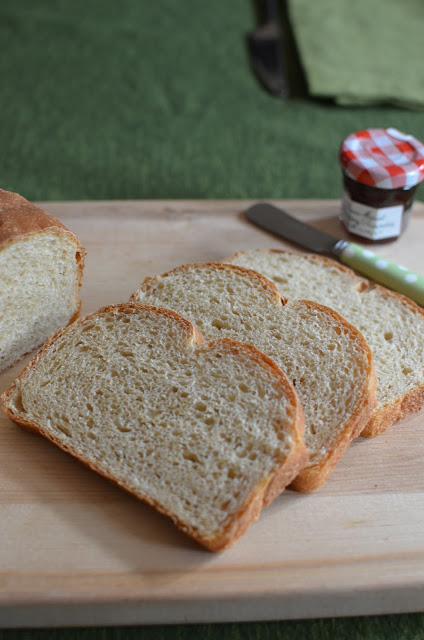 I'd go so far as to say the entire process was fairly smooth-sailing, right up until I got to the stage where I placed the dough into my loaf pans.  One mistake I made was not covering the pans with plastic wrap the whole time; that meant the tops dried so that when it came time to slash the loaves before baking, I ended up with a crinkly Frankenstein-scar on the surface.

The loaf pans themselves were another issue.  The pans I used are old - as in late 1990's old - and I think they're slightly larger than "regular" 9x5 loaf pans.  I used them since I happen to have two, which is what I needed for this recipe (for once, I did not divide the recipe in half!) and the only other loaf pan I have is an 8x4 one that I feared would be too small anyway. 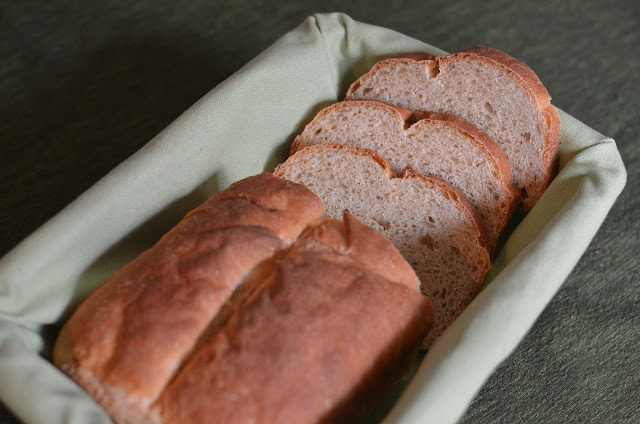 I think it might be time to invest in more loaf pans.  Given the pans were a bit roomy, the loaves didn't rise or fill up as much as they should have in the pans and I ended up with rather squat loaves. That's my theory anyway.  It could very well be that I needed a warmer place to let the dough rise in the pans but whatever the case, this is what I got and I'll gladly accept it. 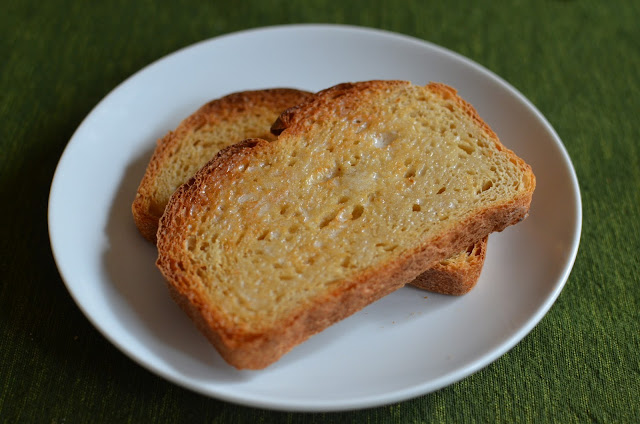 My homemade bread likely came out denser than they were suppose to but they sure made great little pieces of crunchy toast (and that makes me happy because I like my toast very crunchy).  We had fun spreading all kinds of toppings - butter, peanut butter, strawberry jam, Nutella - on them.  Making your own bread is a great excuse to just eat more bread!  I mean, you have to experiment and taste them in all different ways, don't you?

Now that Fall is almost here, I'm starting to crave breads and heartier foods. I might be in the minority but I'm ready for Fall in many ways.  We had a little breakfast gathering over Labor Day weekend to bid an unofficial farewell to summer.  I love a breakfast buffet at home, and cooking breakfast or brunch for a group is far easier and more relaxed than other meals.  I skipped the pancakes this time and went for savory items.  It was an excellent opportunity for me to press some of this homemade bread on my peeps. 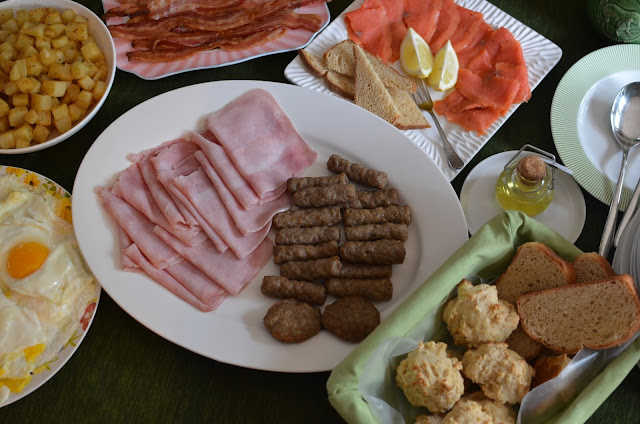 I decided not to bore you with grainy behind-the-scenes pictures of my bread-making endeavor.  I don't want to give the false impression of having any level of expertise on this subject.  I have, however, kept those pictures and jotted down my mistakes, to help me on my next attempt - and hopefully, there will be one.
In the meantime, it feels great to accomplish something I've wanted to try for a long time.  Here's to learning something new!

* Update:  A subsequent attempt at this bread came out a lot better, I think! 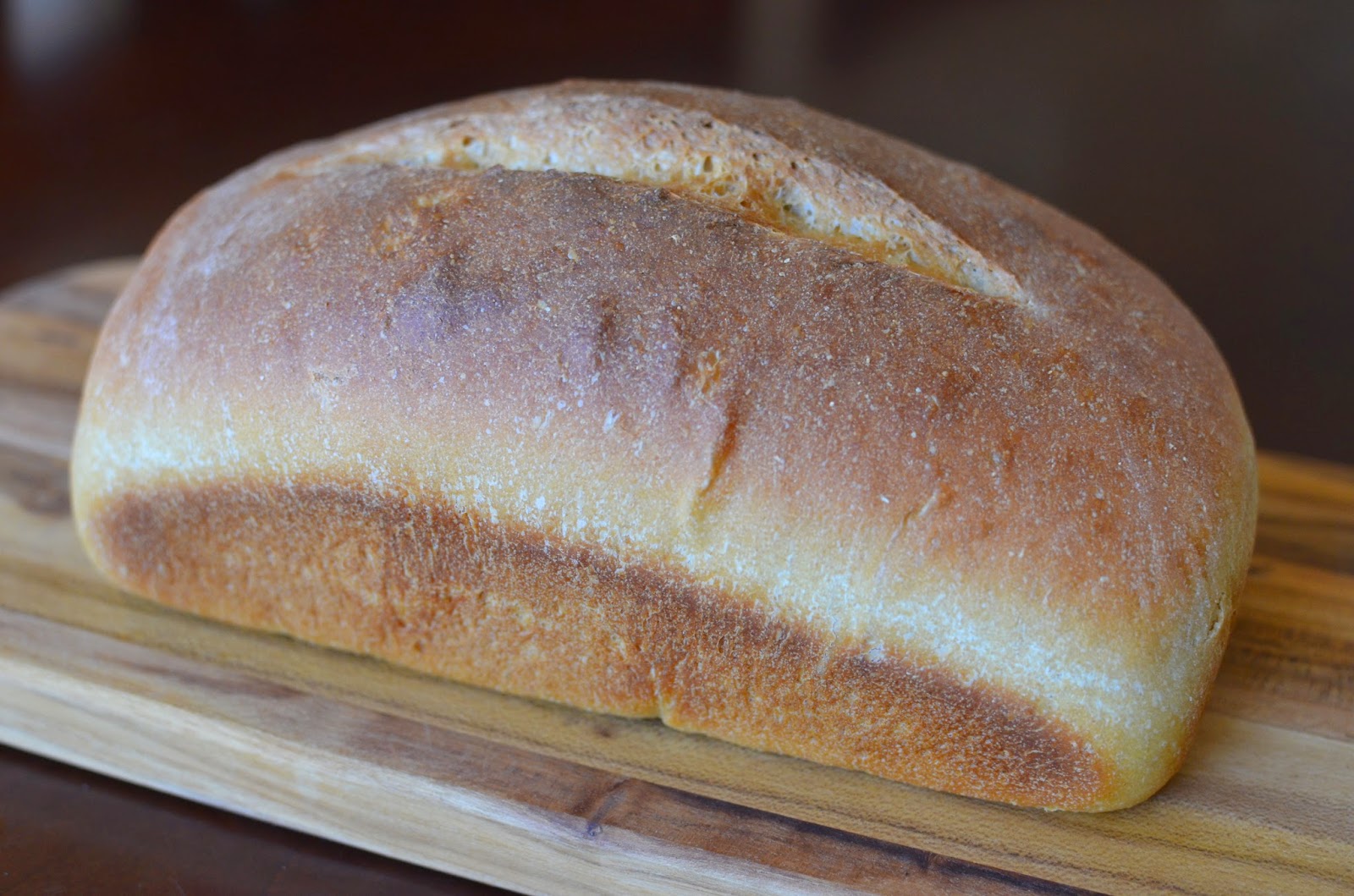 Basic Whole Wheat Bread
From The Kitchn, with some of my notes [See original recipe as well as crucial instructions on how to shape the dough into loaves.]

Pour warm water into the bowl of a stand mixer.  Stir in yeast and allow it to sit a few minutes until yeast dissolves.  Stir in the milk, honey, and oil.

Fix stand mixer with the dough hook attachment.  Knead the dough for 8-9 minutes.  If the dough is sticky (described as "bubble-gum" sticky), add extra all-purpose flour, one tablespoon at a time, until it is no longer sticky and just slightly tacky.  The dough is ready when it is smooth, springs back to the touch, and forms a ball without sagging.

Remove dough, wipe the bowl clean, and lightly grease the bowl with a little oil.  Form the dough into a ball, turn it in the bowl to coat the surface with oil and cover the bowl.  Let dough rise in a warm spot until nearly doubled, about 1 to 1 1/2 hours.  (I set the oven to preheat at 350 degrees for about 2 minutes and then immediately turned the oven off to create a warm spot.)

Sprinkle some flour on the counter and turn the dough out onto it.  Divide the dough into two pieces and shape each into a loose ball.  Let dough rest for 10 minutes.

Grease 2 loaf pans with cooking spray or a little oil.  Shape each ball of dough into a loaf (tutorial on how to do this: here), making sure the surface is stretched taut so that the bread rises and won't be overly dense.  Place each into their loaf pan, cover with plastic wrap, and let rise a second time until they begin to dome over the edge of the pan, roughly 30-40 minutes.

About halfway through the second rise, heat the oven to 425 degrees.  You want to have the oven heated and ready when the bread is ready.  Don't let the bread rise above an inch over the loaf pans or it could deflate in the oven (this is what I've read, anyway).

Using a serrated knife, make a shallow slash down the middle of the loaf tops.  Place loaves into the oven and immediately turn the oven down to 375 degrees. Bake for 30-35 minutes, or until loaves are dark golden brown.  They should sound hollow when tapped at the bottom.  Remove the loaves from the pan (careful, they're hot) and let cool completely before slicing.

You can keep the bread, wrapped and at room temperature, for several days. Or freeze them by wrapping loaves in plastic and foil and placing it in a freezer bag, for up to 3 months.  I defrost it by letting the bread sit, wrapped, at room temperature.  You can refresh and warm the loaf up by placing it in a 350 degree oven for about 5 minutes (leave it in the foil but remove plastic wrap before warming).