This is another first for me: tiramisu.  It's one of my husband's favorite desserts - the one he's likely to order by default at an Italian restaurant unless something really outstanding catches his eye.  I'm actually not a big fan of it (other pure chocolate options call out to me way more) but I've always wanted to make it since he enjoys it so much. 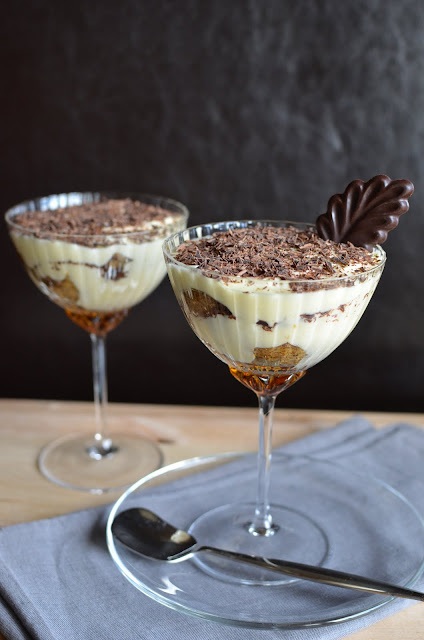 I want to jump right ahead and tell you these turned out great!  It was a relief since I was nervous about it.  My husband actually said it's the best he's ever tasted (granted, he's biased) and I also thought it was really good (and I'd tell you if I thought otherwise).  The tiramisu was pretty much everything we wanted it to be: creamy, fluffy, and light, with plenty of moisture, coffee flavor, and a noticeable hit of booze (in the form of amaretto, in my case) embedded into those ladyfingers, which magically transform from hard cookies into moist cake.  I admire the wizardry of the Italians more and more everyday!

I'll be making these again for sure but to give you a little back story, the idea of making tiramisu always seemed a little daunting to me - the espresso, the liqueur, the eggs, the dipping, the layering, etc.  And I'm used to tiramisu in a big pan and I couldn't very well make a "regular" portion and expect or want my husband to polish off the majority of it himself.  But I was encouraged by a recipe I found in Cooking for Two from America's Test Kitchen that reduced the portion and made it sound do-able. 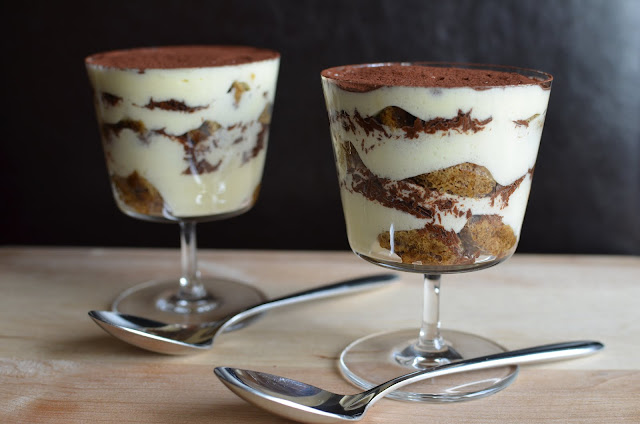 But you know how it goes sometimes...you start off with one idea or recipe, then you look somewhere else and something there appeals to you.  Long story short, I ended up essentially going with David Lebovitz's recipe, with a few tweaks, and making individual portions (instead of using a teeny 3-cup baking dish as per the Test Kitchen recipe).

I liked David's somewhat more-traditional recipe incorporating egg whites instead of heavy cream.  This is where I should inject the usual warnings about consuming raw eggs.  There was raw yolks in both recipes so I figured I might as well go with the whites and stay closer to tradition, and hopefully get a lighter product, in the process.  David also tucks a little grated chocolate on top of each layer of creamy filling and that sounded like an excellent idea to me! 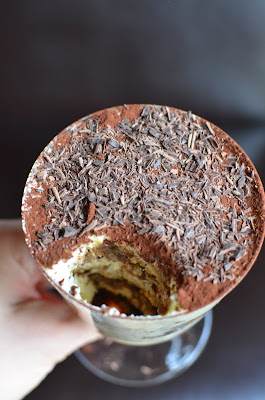 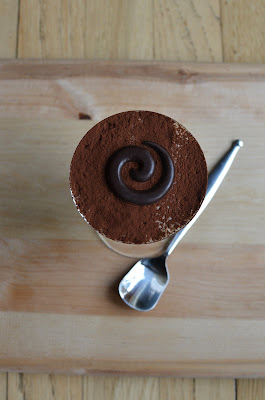 Since we don't make or drink espresso at home, I kept things simple by using making a brew using instant espresso powder, which I use often in baking.  And instead of the more typical dark rum, I used Amaretto since that's what I already had in the house.  I think it all worked out beautifully.  I made 5 individual portions with this recipe but two of the three are smaller, with two layers of ladyfingers and mascarpone cream as opposed to three.  When I was making this in the little glasses, I realized I was assembling a trifle - I never thought of tiramisu that way before.

Some family members stopped by to taste-test with us.  Glasses were emptied quickly and I was glad I tucked the last one in the fridge so that my husband could have an extra.  And tiramisu sits really well in the fridge and is a great make-ahead.  The ladyfingers soften, the filling mellows, and the flavors meld together.  Just add some cocoa powder and/or chocolate shavings right before serving.  I took the opportunity to take out my chocolate molds (an impulse buy from the craft store I knew I'd eventually be able to justify) and embellished the desserts with even more chocolate.  Chocolate and coffee just go together.

Make some room for chocolate!  The first thing I did was focus on the chocolate component of the tiramisu (of course)!  I took some dark chocolate and made shavings with a vegetable peeler.  This will be sprinkled on top of each layer of the mascapone cream.  I got a little enthusiastic and shaved more than I needed (more than shown below) when about 1 ounce should suffice. 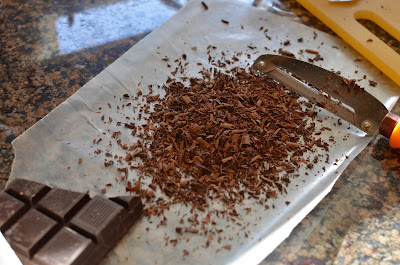 Since I was working with the chocolate, I also melted some, placed it inside a plastic sandwich bag with a small tip cut off and filled some chocolate molds to make decorations for the tiramisu.  The more chocolate, the better in my book!

As you can tell from most of the photos, I prepared the tiramisu the night before serving.  It really needs time to chill in the fridge so it's a perfect dessert to make ahead of time.  Here's what you need to do:

Espresso mixture.  This recipe is really about 90% David Lebovitz and 10% America's Test Kitchen, with a couple of my own tweaks.  I took the Test Kitchen's method of making espresso using instant espresso powder.  I dissolved 2 tablespoons of instant espresso powder into 2/3 cup of hot water.  Then - very important - let the espresso cool to room temperature before adding the liqueur.  David's recipe calls for dark rum (like most tiramisu recipes) and cognac but I used Amaretto, an almond liqueur my husband really likes, that I already have at home.  Aside from rum, I've also seen other variations using kahlua, frangelico, brandy, and marsala wine.  We really liked the taste of the amaretto liqueur. 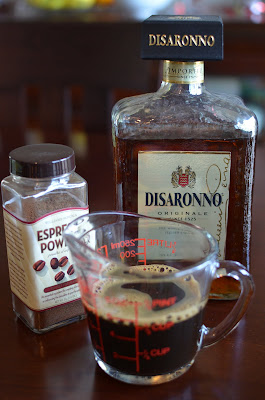 Ladyfingers.  You'll need Italian ladyfingers called Savoiardi.  I used 13 ladyfingers but the amount you use (and servings you make) could differ slightly depending on what size containers (glasses, ramekins, cups, etc.) you use. 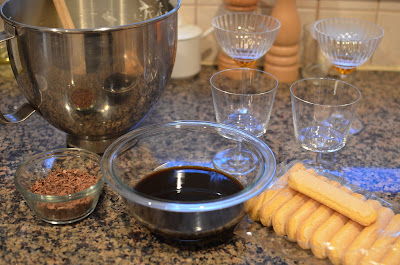 Mascarpone cream.  The other major component is clearly the mascarpone cream.  The mascarpone filling in this recipe is made with both raw egg yolks and egg whites.  *If you can't find a trustworthy source for fresh eggs or are just uncomfortable with consuming raw eggs, you'll want to look for another recipe that uses whip cream instead of egg whites and one that cooks the yolks.  Obviously, this is not a suitable dessert for children, pregnant women, or the elderly.*

First, whip 2 egg whites with 3 tablespoons of sugar until stiff and set aside to fold into the mixture later.  Then, I whisked 2 egg yolks together with another 3 tablespoons sugar until it thickened and turned light in color.  (I started this process with the yolks using the stand mixer but switched over to do it by hand because it was just too little to work effectively with the machine).

Gently stir 8 ounces of cold mascarpone cheese into the yolk mixture by hand, using a whisk.  I say "cold" because the ATK recipe warns that room temperature mascarpone cheese could separate; I did remove it from the fridge at the start of this process and that is perfectly fine as long as it's not super hot in your kitchen.  Once the mascarpone has been incorporated without any lumps in the mixture, fold in the egg whites.  The finished mixture should be fluffy and light, thick yet fluid.
Assemble your tiramisu trifle.  Have your serving glasses ready, start by dipping a ladyfinger into the espresso mixture.  Here, I followed America's Test Kitchen's advice, dipping and flipping it, completing the process within about 2-3 seconds so that the ladyfinger is mostly saturated but not soggy.  Break the ladyfinger in half to fit into the glasses.  If you see that it's too dry in the center, you can give it another very quick dip in the espresso.  I layered my glasses with 1 ladyfinger broken into halves, followed by a big dollop of the mascarpone cream, then a sprinkling of shaved chocolate.  Repeat with another layer of ladyfinger, mascarpone filling, and chocolate.  You will have either 2 or 3 layers of each, depending on the size of your container.  Smooth the final top layer of mascarpone cream (no chocolate on the final layer...yet) and cover the plastic wrap. 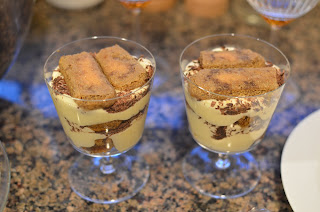 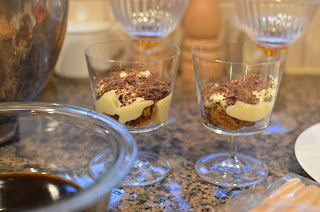 Let it rest!  Let the tiramisu sit, covered, in the refrigerator overnight (or at least 4 hours if that's not possible).  It really does taste a world better after time to rest in the refrigerator.  The mascarpone cream mellows out, the ladyfingers soften, and everything just melds together. 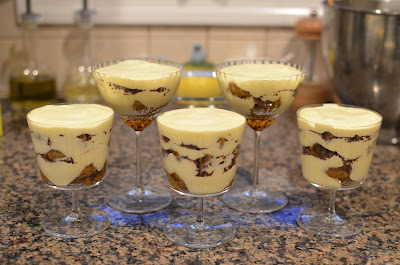 Time to serve.  Right before serving, dust the top with unsweetened cocoa powder and/or more chocolate shavings.  In case you're wondering, like I did, why most recipes have you add the cocoa only before serving, I heard somewhere that the cocoa can turn bitter in the fridge...

I also took out those chocolate decorations I made from my molds and poked one of them into my little individual tiramisu before serving.  I think it made them a little more cute and fun (not to mention tasty). 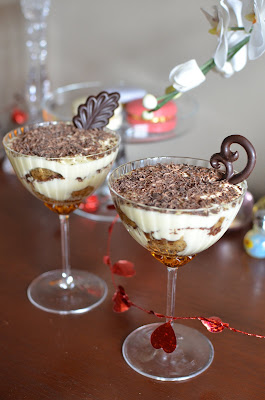 - Makes 5 to 6 individual servings, depending on size of containers -

Espresso mixture: In a small bowl, stir instant espresso powder into hot water until dissolved.  Let espresso cool to room temperature before stirring in the amaretto.  Set aside.

Mascarpone cream: In the bowl of stand mixer fitted with the whisk attachment, whip egg whites with a pinch of salt until they begin to get stiff.  Gradually add 3 tablespoons of the sugar and beat until stiff and glossy.  Scrape the whites into a small bowl.

Add egg yolks into the same mixer bowl with the remaining 3 tablespoons of sugar.  Whisk the yolks and sugar together by hand until it turns light in color and thickens.  Gently beat in the mascarpone with the whisk until combined and lump-free.  With a rubber spatula, fold in the beaten egg whites in 2 installments until fully incorporated.  The mascarpone cream should be fluffy and light.

Assembly:  Dip a ladyfinger into the espresso mixture, roll, and remove it within about 2-3 seconds.  Break it in half (if the center looks very dry, you can give it another quick dip) and place into the bottom of your glass or other small individual serving container.  Spoon a big dollop of the mascarpone cream on top of the ladyfinger.  Then add some grated chocolate over the cream, if using.  Repeat with one or two more layers of ladyfinger, mascarpone cream and grated chocolate (ending with just mascarpone cream on top), depending on the size of your serving dish.

Cover the glasses with plastic wrap and refrigerate overnight (or at least 4 hours).

Right before serving, dust the top with unsweetened cocoa powder and/or a bit more grated chocolate.