A little something sweet to usher in the New Year...

The clock is ticking...we're all anticipating.  The gifts have long been unwrapped, the boxes recycled, Christmas cookies are all gone, but we're still indulging in that lull during this last week of the year.  A New Year is coming!
Approaching a New Year is so exciting...it's the prospect of a new start - the hope and anticipation of good things to come, and maybe the opportunity to move on from certain things in the past.  I don't know about you but I don't really make any specific new year's resolutions anymore.  I don't think resolutions are a bad idea at all - it makes us think about ways to improve ourselves.  But, at the same time, don't we tend to make goals that are just a bit too lofty, and thereby maybe setting ourselves up for failure.  So these days, I resolve to just be better.  Do better, live better, be better...so here's to a better 2012! 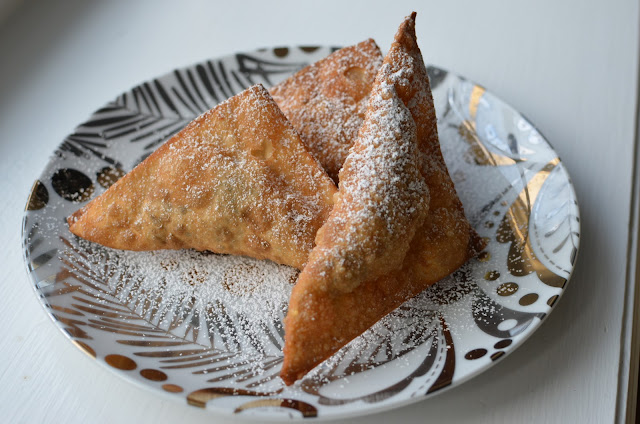 In my book, living better doesn't mean making it less sweet.  Hence, I'm sharing a little sweet treat today in anticipation of the New Year.  I think life is about balance and living among things that bring you joy.  For me, that means I must have chocolate regularly (I will try not to do it excessively but regularity is a must) and I will continue to experiment in the kitchen, baking and cooking to share with my family and friends, because that brings me joy. 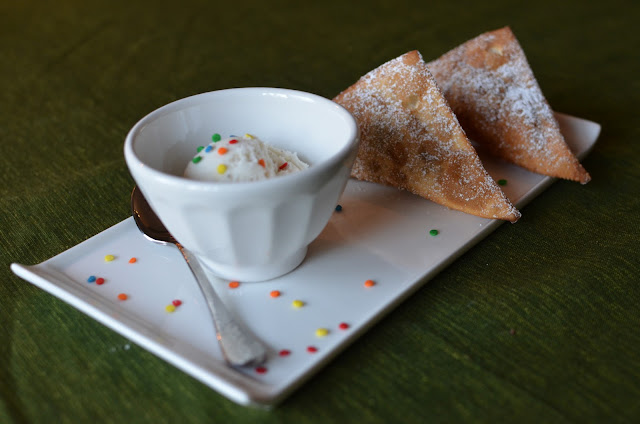 I rarely fry anything (because of the general splattering, mess, and dilemma of what to do with the leftover oil) but New Year's Eve calls for making the effort - although in reality, these chocolate and nutella wontons are very easy to make.  If you'd rather skip the ice cream, these crispy little sweet bites go very nicely with a glass or two of champagne.  However you plan to celebrate, enjoy your New Year's Eve safely and happily.

I made two kinds of wontons here, or I should say I used 2 types of fillings.  One is chocolate, filled with dark chocolate chips (you can also use semi-sweet) and another is filled with chocolate-hazelnut spread, or Nutella.

Start by lightly beating an egg with about a teaspoon of cold water to make an egg wash to seal the wontons.  Then take some store-bought wonton skins and lay one in front of you like the photo below. 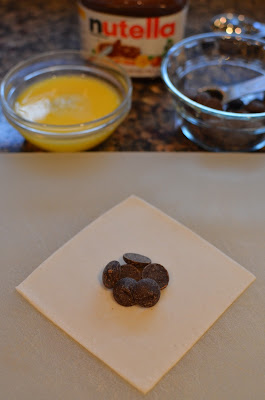 For the chocolate wontons, I used about 7 chocolate chips but you could probably squeezing in a couple more.  For the nutella version, place a dollop (about 2-3 teaspoons) of the spread in the center.  Coat the corners with the egg wash and seal. 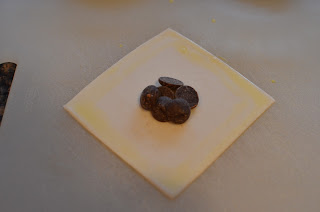 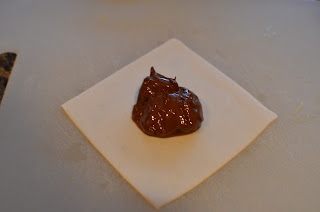 To seal, just fold one half of the triangle over the other and press the corners with your fingers.  But please learn from my mistake and try to push out as much air from the center of the wonton as you can when folding and sealing them.  I didn't really work from a recipe when making this and not paying much attention to the air bubbles made my wontons puffed up way more than I wanted them to. 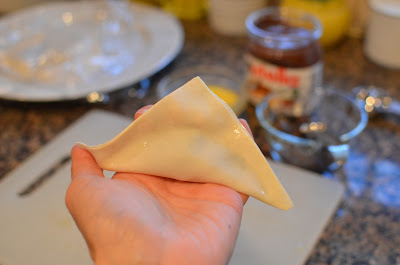 Heat vegetable or canola oil to 350 degrees.  I've learned it's really important to make sure your oil is at the right temperature and hot enough when frying so that you don't end up with a greasy finished product.  Fry the wontons until golden brown on each side - this takes less than a minute for each side. 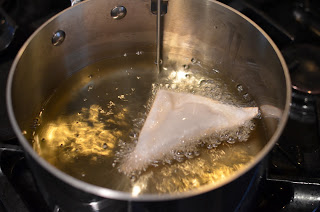 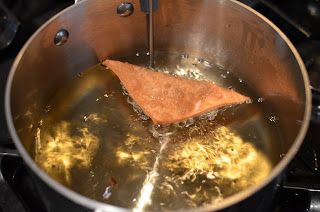 Drain the fried chocolate wontons on paper towels and let cool.  Then dust a little confectioners' sugar over the top.  Enjoy it with some ice cream or a glass of something sparkly. 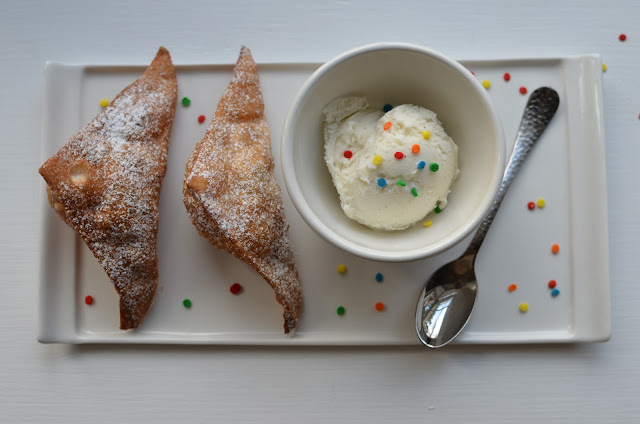 These chocolate wontons are super crunchy and yummy.  My husband and I preferred the nutella filling - that thick, smooth and creamy chocolate-hazelnut filling is great against the crispy shell.  I suspect we like it more also because there's more of it - it's easier to pack on the creamy nutella as opposed to the chocolate chips.  That said, however, the little guy liked the chocolate one better. ﻿﻿

Lightly beat egg with about a teaspoon of cold water to make an egg wash to seal the wontons.  Heat 2 inches of oil in a pan until it reaches 350 degrees.

Fry the wontons, a few at a time, in the hot oil (don't overcrowd or put too many in to avoid bringing the temperature of the oil down).  Fry until the wontons are golden brown, roughly 45-60 seconds per side.  Remove wontons from the oil and drain on a paper towel lined plate.  Let cool and dust with confectioners' sugar.
Posted by Monica at 5:46 PM