I had some extra heavy cream in the refrigerator and started thinking about how I could use it up.  So I was mulling it over and looking for ideas online.  I'm craving chocolate.  What else is new.  So I figured how about chocolate mousse - plenty of chocolate and it's eaten cold, which is very nice since it's been very hot around here lately, with some days hitting the 100 degree mark.  Oh, and I can put a nice big dollop of cold whipped cream on top. 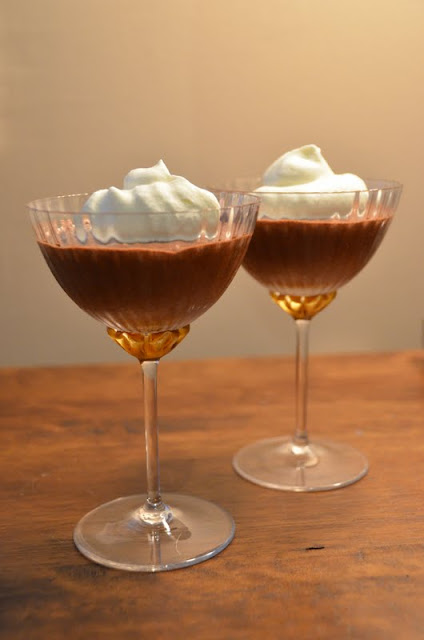 I found a recipe from Dorie Greenspan that caught my eye.  It's dubbed "Top-Secret Chocolate Mousse" or what appears to be the French ladies' (I'm sure it could be French gentleman's too) "secret" chocolate mousse recipe.  Sounds interesting, right?  Do you remember when I made a French yogurt cake and mentioned I'd read that it's one of only a few sweets a French household will make since there are so many amazing patisseries to shop from?  Apparently, Dorie says the two other desserts they will make at home are mousse and rice pudding.  And it took her a while to finally get this "secret" recipe for their delicious chocolate mousse and as it turns out, it comes from the back of a Nestlé chocolate bar!  Well, it sounds very interesting but the thing that really grabbed my attention was that it takes less than five ingredients to whip this up.  I was game; let's try it!

The good news is the chocolate mousse turned out utterly delicious.  It is smooth, silky, and light, with a serious chocolate flavor that is balanced out by the whipped cream topping.  As my husband said, it's rich but light at the same time.  It turned out much better than I thought it would when I was making it.  In fact, I wasn't sure I was doing it right (did I mention I never made mousse before?).  I'll get into the details later but suffice it to say that when I was adding the egg yolks to the chocolate, the mixture became very thick.  I just kept plowing along and I'm glad I didn't give up because the final product tasted awesome. 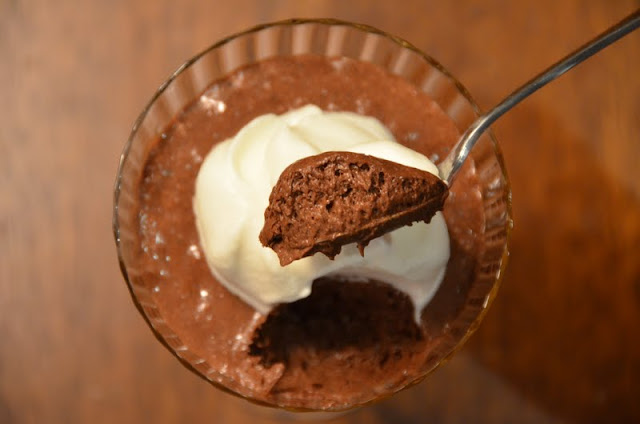 A word of warning though.  This mousse contains raw eggs.  In fact, the eggs and chocolate are the two essential ingredients.  In many other recipes, you'll see whipped cream (rather than egg whites) being used to lighten the mousse.  It's also a bit of an unusual recipe with no butter here at all.  I think this is part of the reason why the chocolate mixture became so thick when the egg yolks were added.  I'm not totally sure if that was supposed to happen and I have a couple of ideas to mitigate this next time but I'm very happy with the end result.

The ingredients for this luscious chocolate mousse are 3 1/2 ounces of bittersweet chocolate, 3 eggs separated and at room-temperature*, 2 1/2 teaspoons sugar, a pinch of salt, and some heavy cream to make the whipped cream that goes on top.  As you can tell, it's all about the chocolate (so choose something that you like) while the eggs will add a combination of richness (the yolks) and structure (the whites).

* In most baking recipes, eggs are generally asked to be at room-temperature.  If the recipe calls for separating the yolks from the whites, a great tip I've learned is to separate the eggs when they are cold.  It's much easier that way.  Then allow them to come to room temperature in separate bowls.  Very importantly, make sure to cover the egg yolks with plastic wrap to prevent it from drying out and a skin from forming on the top (it's happened to me until I realized what was happening). *

Start by melting the bittersweet chocolate gently over some simmering water.  Then, add the 3 egg yolks and stir around with a whisk until it's smooth.  Here is where I first encountered problem #1.  Well, I think it was a problem but I'm not entirely sure since the final product was really good. 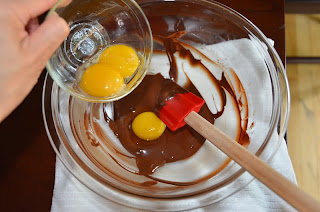 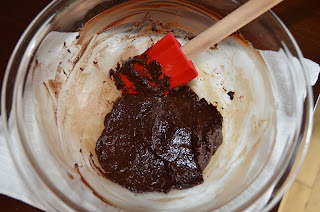 When I added the yolks, the chocolate turned into a thick paste!  I'm expecting smooth silkiness, not a shiny thick chocolate paste at this point.  It could be the chocolate was seizing though I'm not totally sure because while it thickened to a paste, it was rather smooth and shiny...probably thanks to the egg yolks.  The problem could've been the lack of butter or the chocolate could've been too hot.  Next time around, I will let the chocolate cool for a while before adding the room-temperature eggs.  Adding a bit of butter would probably alleviate this problem but I don't want to add extra fat where none is required and again, the mousse actually came out great.

Well, I usually try not panic in these types of situations and just keep on going.  In most cases, all is not lost and even if things don't come out perfect, you learn something and chances are, it still tastes pretty good.  So I just kept moving along.  Next step is to whip the egg whites with a pinch of salt until soft peaks.  Slowly add just 1 1/2 teaspoons of sugar and whip until medium-firm peaks.  Watch this carefully since it happens very quickly and you don't want the whites to overwhip and break.  I always tend to overwhip things so I'm trying to be very careful here since you can't really hide that in a mousse. 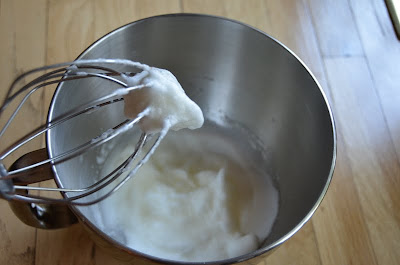 Then, the recipe says to fold in about a quarter of the whites to the chocolate mixture to lighten it up.  Problem #2 now.  Since my chocolate was that thick paste, I couldn't exactly fold in the whites gently (hence, why I think I must've done something wrong in the prior step).  So I did the only thing I could.  I worked those egg whites in there as much as I needed to in order to get the whites incorporated and the mixture lightened.  This seemed to work, although I figured I've probably had to forgo some of the foaminess of the mousse.  Then, I folded in the remaining whites. 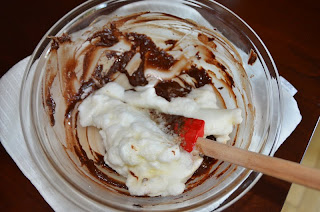 I stopped folding at this point in the picture below.  It wasn't as airy as I would've liked or thought it should be but it wasn't completely flat either.  Let's scooped them into glasses, chill them and see how it tastes. 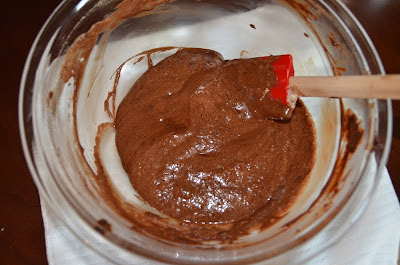 There are 2 glasses in the picture but this recipe makes about 3 of these. 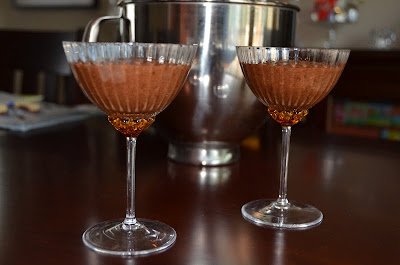 Chill the mousse for about 4 hours until set.  I was eagerly anticipating these few hours since I wasn't at all confident at this point how it would end up tasting.

Right before serving, I whip the cream that will go on top.  I like to whip small quantities of cream by hand with a cold bowl and whisk.  Don't skip the whipped cream.  The chocolate mousse is rich and the lightly sweetened cream is the perfect partner for it. 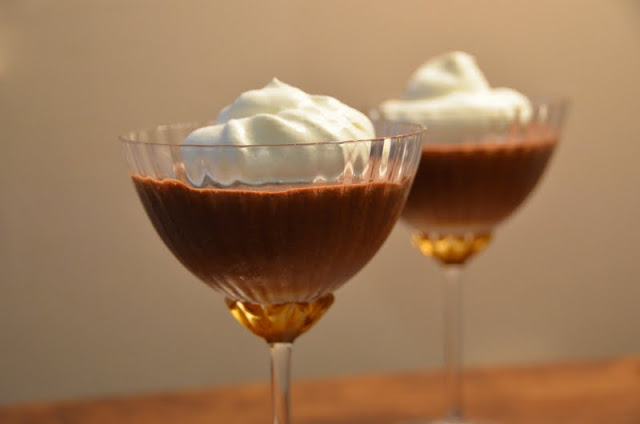 I put my spoon into the cold mousse and thought it looked quite promising.  The texture was soft and airy.  I took a nervous first bite and what a pleasant surprise!  It was totally delicious.  Smooth and creamy, with a deep chocolate flavor that went so well with that whipped cream.  I couldn't stop eating it.  My husband loved it too.  I plan to make it again in the near future and I hope I can work out the kinks with that pasty chocolate.  But all's well that ends well.  If this is not the "perfect" end result of this French chocolate mousse, I can't wait to try it again and see if it can get any better.  Right now, I'm not sure it could be better. 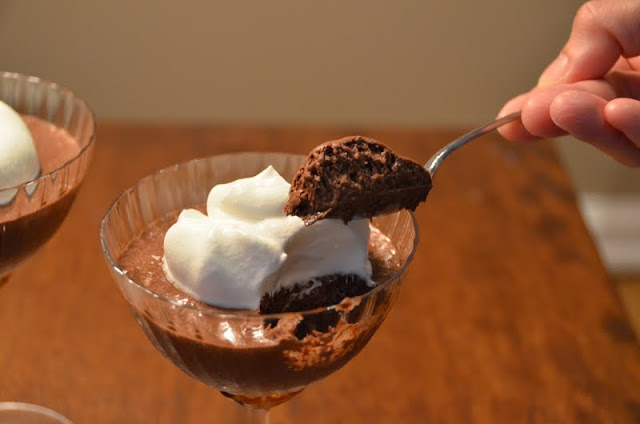 I just took a break from writing up this post to finish that last serving in the fridge with my husband (it can stay in the refrigerator for a day).  Let me reaffirm that this chocolate mousse is delicious.  As I'm eating it, all I kept saying was "this is so good, this is so good."  Thank you, Ms. Greenspan for getting this recipe from your French friends and sharing it with all of us!


* Please note this recipe uses raw eggs.  Because of this, organic or other fresh eggs are recommended.  Raw eggs are not recommended for some people including young children, the elderly or pregnant woman. *

Place chocolate into a glass or metal bowl over a pan of simmering water.  Stir until just melted and remove from the pan.  Let chocolate cool until it's at about room temperature.  Add egg yolks, one at a time, into the chocolate and stir with a whisk until smooth.

In the bowl of a stand mixer, add the egg whites and a pinch of salt.  Be sure the egg whites are at room temperature since that helps them whip up.  Whip with the whisk attachment until soft peaks.  Add 1 1/2 teaspoons of sugar, continuing to whip until whites are glossy and reach medium-firm peaks.  Watch the whites carefully so as not to over beat them.

Add 1/4 of the whipped egg whites into the chocolate mixture and fold in to lighten it.  Then, gently fold in the rest of the whites until incorporated, being careful not to overmix and deflate the mousse.  Scoop into serving glasses or bowls.  Cover and refrigerate for about 4 hours until mousse is set.  The mousse can be kept in the refrigerator for a day before serving.

Place about 3/4 cup of cold heavy cream into a chilled bowl.  Start whisking and add 1 teaspoon of sugar once the cream starts to come together.  Whip until cream is firm but still spoonable.

Place a generous dollop of whipped cream on top of the chocolate mousse and enjoy right away!