For the longest time, I've wanted to make an angel food cake.  I've been a little mesmerized by the general idea of a cake made basically from egg whites.  It's essentially fat-free (plenty of sugar though) and sounds as well as looks like a nice light treat.  Ironically, I don't think I've ever eaten angel food cake before I made this one and I was curious.  It sure looks pretty but would I like it? 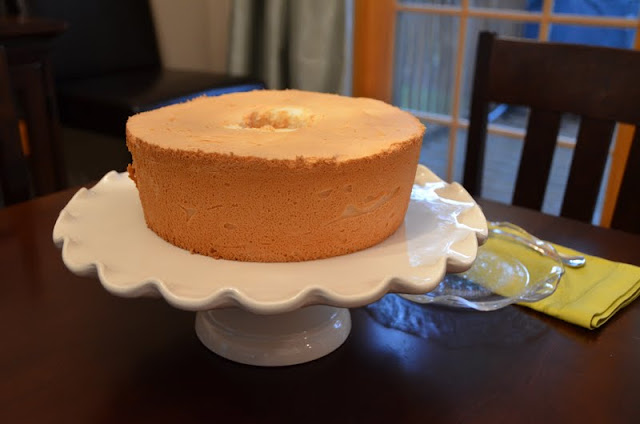 Practically speaking, I never got around to making this cake until now because it sounded a little complicated since we're dealing with a large amount of delicate egg whites and there are a few tricky steps involved (not to mention a new pan to invest in).  Also, I've heard angel food cake described as tasting like cotton candy, not a very good image in my mind.  But I had to figure it out for myself so I finally buckled down and experimented with the angel food cake. 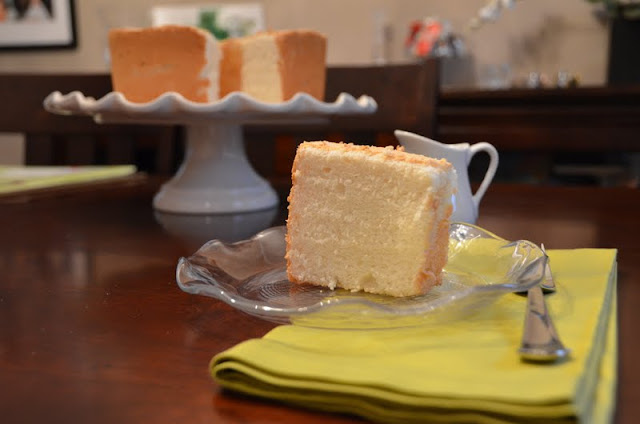 Remember that bittersweet chocolate sauce I made in my prior post?  I had an ulterior motive in making that.  I thought it would be a nice accompaniment to this cake. 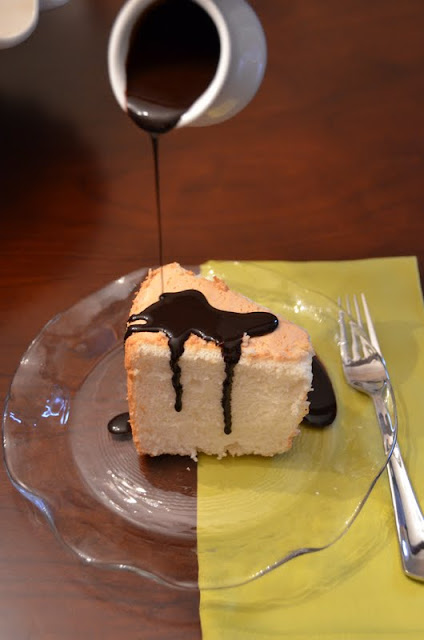 So here are my conclusions from this angel food cake experiment.  Well first, it turned out to be fairly easy to make and I'm assuming I did everything correctly since the cake came out tender, fluffy and light (I have nothing to compare it to having never had one before).  The stand mixer does the work of whipping the egg whites and there's just a bit more steps involving sifting and gentle folding of the flour into the whites.

As for the taste, the angel food cake itself is, well, bland.  It sort of tasted the way it looked but a bit stickier.  I honestly thought I was eating nothing in a sense but then the sweetness left an aftertaste behind that I wasn't a big fan of.  I enjoyed the bittersweet chocolate sauce with the cake and it's such a blank canvas that it's nice to pair the angel food cake with something strong like that or maybe some fruit if you prefer that.  I've also seen recipes incorporating a bit of chocolate or even toasted coconut in the batter to add another dimension of flavor.  Overall, I thought it was alright but it definitely needs a partner or accompaniment to go with it.  I guess I miss the fat - there, I said it.  But it is a pretty thing to look at and I had fun making it and trying it out.  Who knows, I may experiment with another version one day... 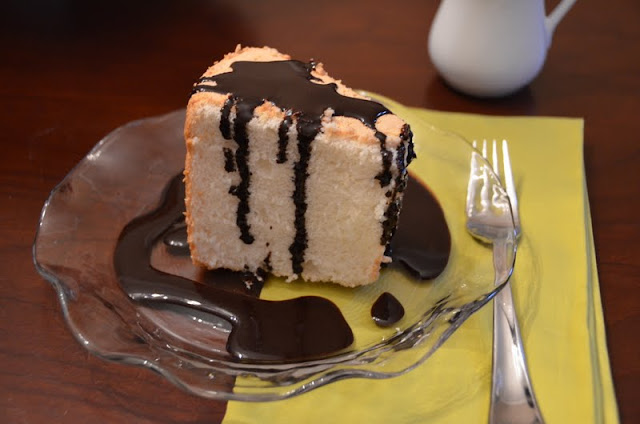 Because this is such a delicate, light cake, you'll need to use cake flour.  It is finer than it's all-purpose cousin.  It comes in a box so look out for that.  To make the cake, you also need an angel food cake pan, or a tube pan.  I bought it a few months ago on one of my visits to Sur La Table.  It's one of my favorite food-related, home goods stores.  There used to be one relatively close to where I live but sadly, it closed, so whenever I do visit one, I really take my time to look around, particularly at the baking section.  My husband drove me into the city a few months ago, partly so I could visit the Sur La Table in Soho.  While he and my son ducked into the Starbucks across the street, I went wandering down the aisles there.  I think I was gone for at least an hour...time flies in there!  By the time I finally got out with my purchases, including this pan (I figured I'd eventually make it now that I have this blog going), hot chocolates had already been long consumed and husband and son had gone off wandering on their own.  I think my husband was starting to get worried but he knows my love of that store. 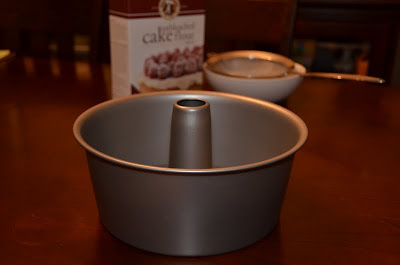 I looked at a few recipes before making trying this angel food cake. In the end, I essentially followed one from Martha Stewart and went for a plain version for my first attempt.  All the recipes were essentially similar - as far as technique, sifting the flour is very important for a light texture as well as properly whipping the egg whites.  Then, it's a matter of gently incorporating the flour without deflating the whites.

To begin, I separate 12 egg whites.  This is essentially the bulk of the cake.  I separate the eggs when they are cold (it's easier) but then let the whites sit at room temperature for an hour or two since they whip up better that way.  Separate each egg white into a separate small bowl and add individually to the bowl of your stand mixer.  This way, you can stop and start over if you accidentally get any yolk in one and don't need ruin the whole batch.  Be sure not to get any yolk or fat into the egg white mixture or they will have trouble whipping up to stiff peaks. 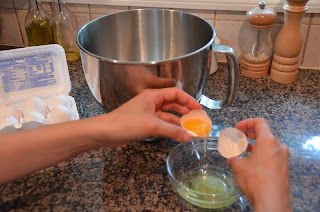 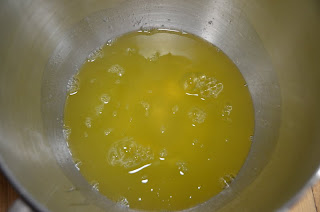 The recipe calls for just a cup of cake flour.  Sift this over the bowl.  While this particular recipe didn't call for it, I wanted to make sure to get the fluffiest texture possible so I measured the flour again after sifting to get just one cup and sift it again another 2 times.  I don't think you can over-sift when it comes to this recipe. 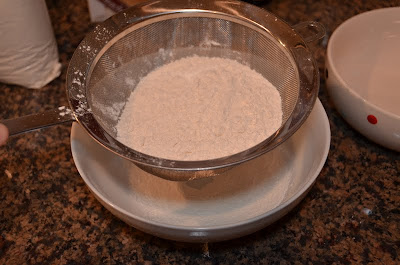 Back to the egg whites.  With the whisk attachment on the stand mixer, start mixing the whites on medium high until it begins to foam.  Then add about a teaspoon or so of cream of tartar; this helps the whites stabilize and whip up better.  Then the mixture whip until it reaches a soft peak. 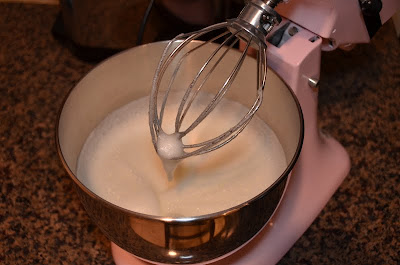 Now, start adding 1 1/4 cups of sugar very slowly.  I used regular granulated sugar; I think superfine sugar would work even better.  It should take about 2 minutes to add the sugar to make sure it's incorporated slowly and we reach a nice shiny stiff peak.  Once that's achieved, add 2 teaspoons of vanilla. 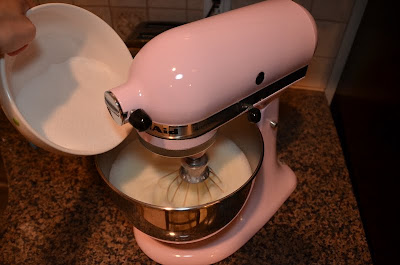 Did I mention it was raining hard the day I made this.  I'm sure it would've been wiser to make this on a nice dry day since whipping egg whites and humidity are not the ideal combination but frankly, rainy days are the best days to stay home and bake.  Luckily, the cream of tartar helped out enough to get the job done.

Here's an instance where this recipe involves an additional step.  Now, we're going to transfer the whites into a bowl.  I think you could continue in the same mixer bowl but transfering it to a large, wide bowl will make folding in and incorporating the flour mixture (the last step) easier so that you don't deflate the whites.  Add the flour mixture in four batches and sift the flour over the whites each time, then fold in gently.  Take your spatula down the center and fold over, while turning the bowl each time. 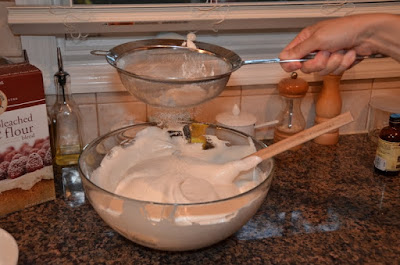 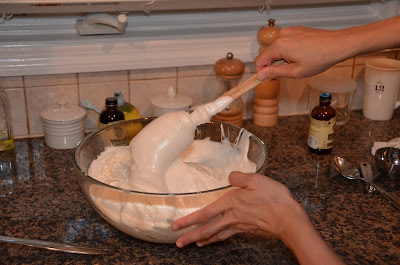 Fill the batter into an ungreased angel food cake pan.  You don't want to grease it in any way so that the batter has something to grab on to around the sides to climb up and rise.  Run a knife through the cake to release any air bubbles and smooth out the top.  bake in a preheated 350 degree oven for about 35 to 40 minutes until it's lightly browned and has a bit of a spring to it when you press it lightly.  I got so lucky because we literally lost power not long after this cake was baked!  It was raining heavily and we lost power for over an hour. 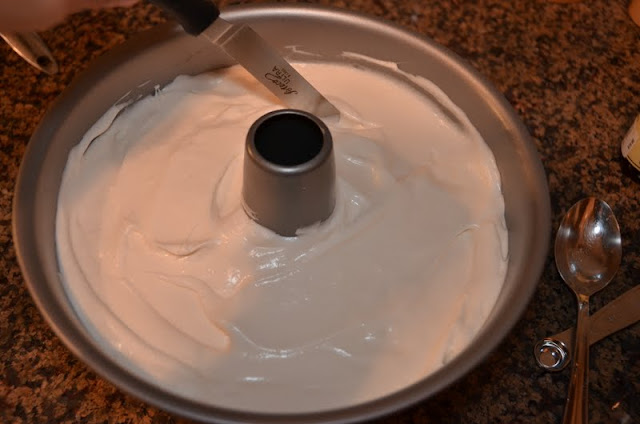 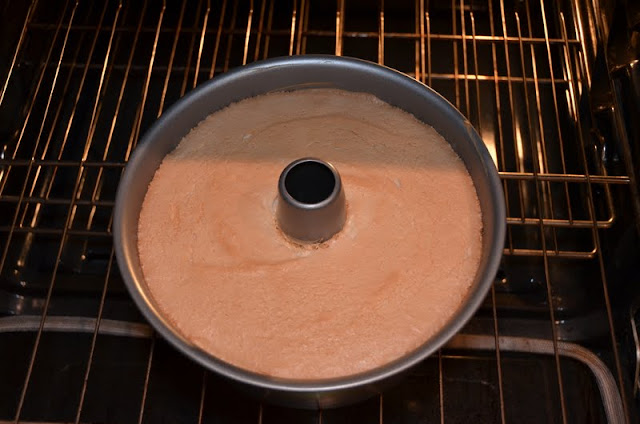 Now here comes the funny part.  We need to invert the cake for an hour or two while it cools.  You need to put it upside down (it won't fall) so that it doesn't collapse on itself and remains fluffy and light.  Since my pan doesn't have "legs" if you will (it's more a tube pan), you turn the pan over and sit it over the neck of a bottle.  That's what I've done here.  It's a little crazy looking but it did work. 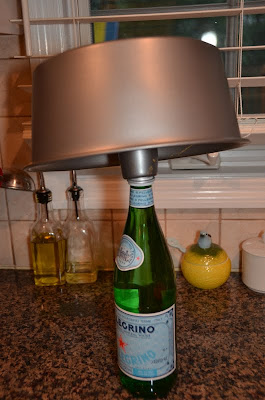 Finally, we can unmold the cake.  Take a knife and run it all around the sides of the pan and around the center tube.  Remove the sides.  Then run the knife under the base and remove that.  Turn the cake around and onto a platter.  You can dust it with some confectioners' sugar to make the top look nicer but I think there's more than enough sugar going on here already. 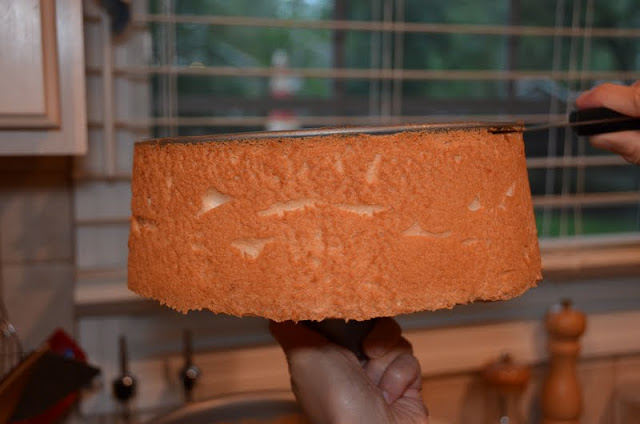 Slice a piece with a serrated knife and add some chocolate sauce. 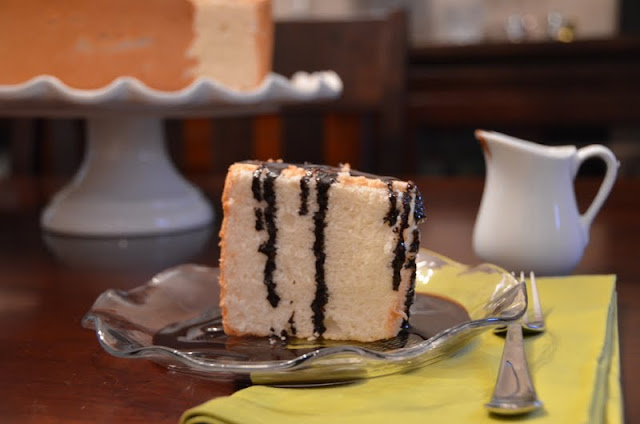 I essentially followed the basic angel food cake recipe on Martha Stewart.com.  I did take the additional step of measuring out the cup of cake flour after sifting and sifting the flour again 2 more times.

As the accompaniment to the angel food cake, I used the lighter chocolate sauce I made in the previous post.
Posted by Monica at 10:30 PM