I had never had banana pudding before.  It's a little hard to believe since banana pudding is such a classic American dessert.  But since there is such a long list of things I've never eaten, it doesn't really come as a huge surprise either.  Regardless of the circumstances, it was time for banana pudding. 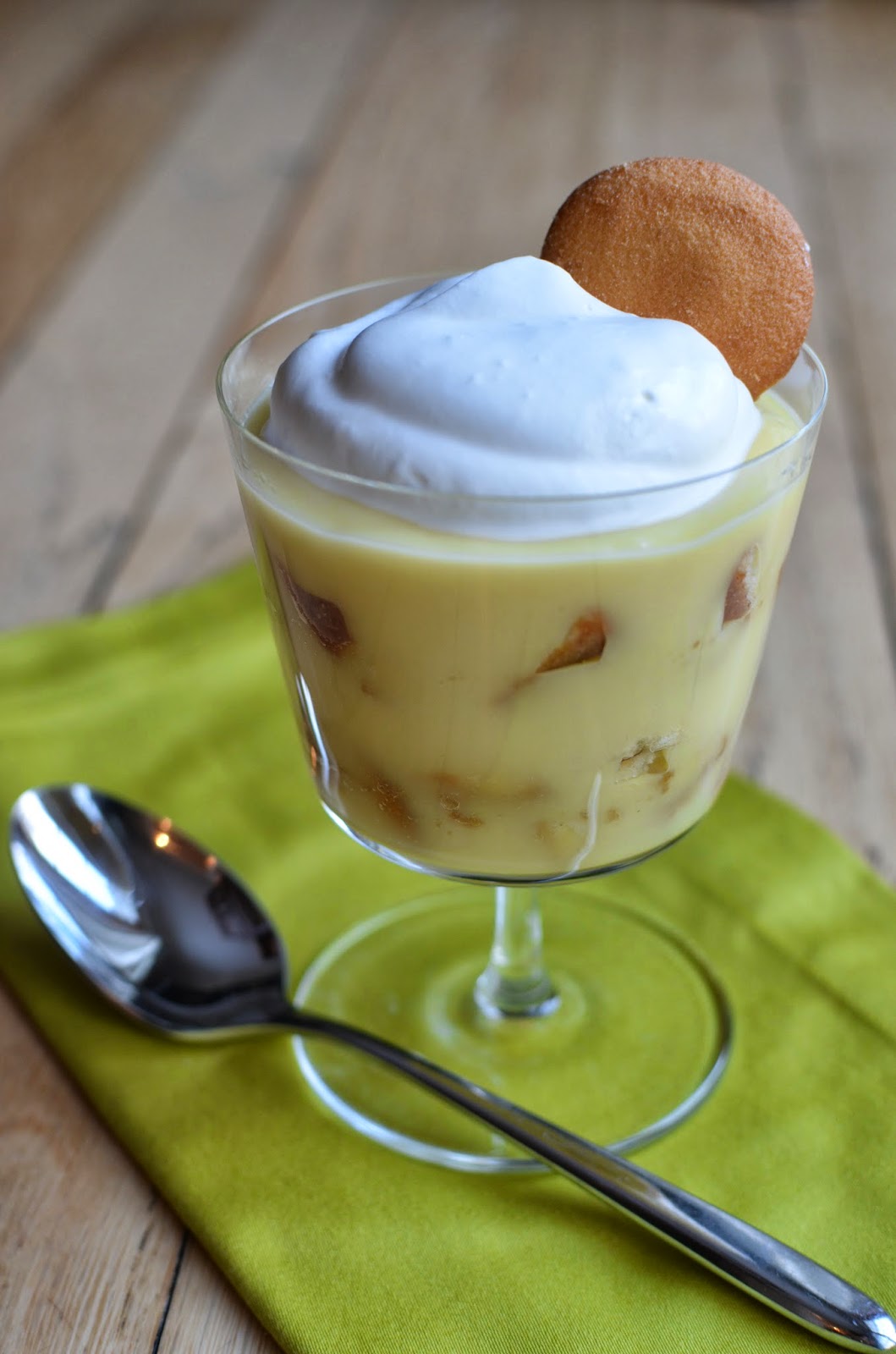 I like to unwind at night by watching cooking shows (and snacking).  A show I've taken to recording is The Chew and one of the co-hosts, Daphne Oz, loves banana pudding.  It seems to come up all the time and that got me thinking about it and realizing I've never tasted banana pudding before.  I asked my husband, who has had it, to describe it but he wasn't able to explain it to me as fully as I like. That made me all the more curious so I figured I'd just have to whip up a couple of banana pudding parfaits one day so I could give it a try for myself.

I was a little surprised that banana pudding isn't banana pudding, as in banana-flavored pudding in itself.  I did find a couple of recipes that incorporated caramelized bananas into the pudding but those seemed to be your more "gourmet" variety and not typical of classic banana pudding recipes. After tasting it, I can see why just plain vanilla pudding is all you really need. I'm not sure why I wasn't expecting it but I was somewhat surprised by how much flavor the sliced bananas infused into everything.  It literally became banana-pudding when the plain pudding merged with the fresh bananas.  No wonder my husband always thought it was "banana pudding", not vanilla pudding plus bananas! 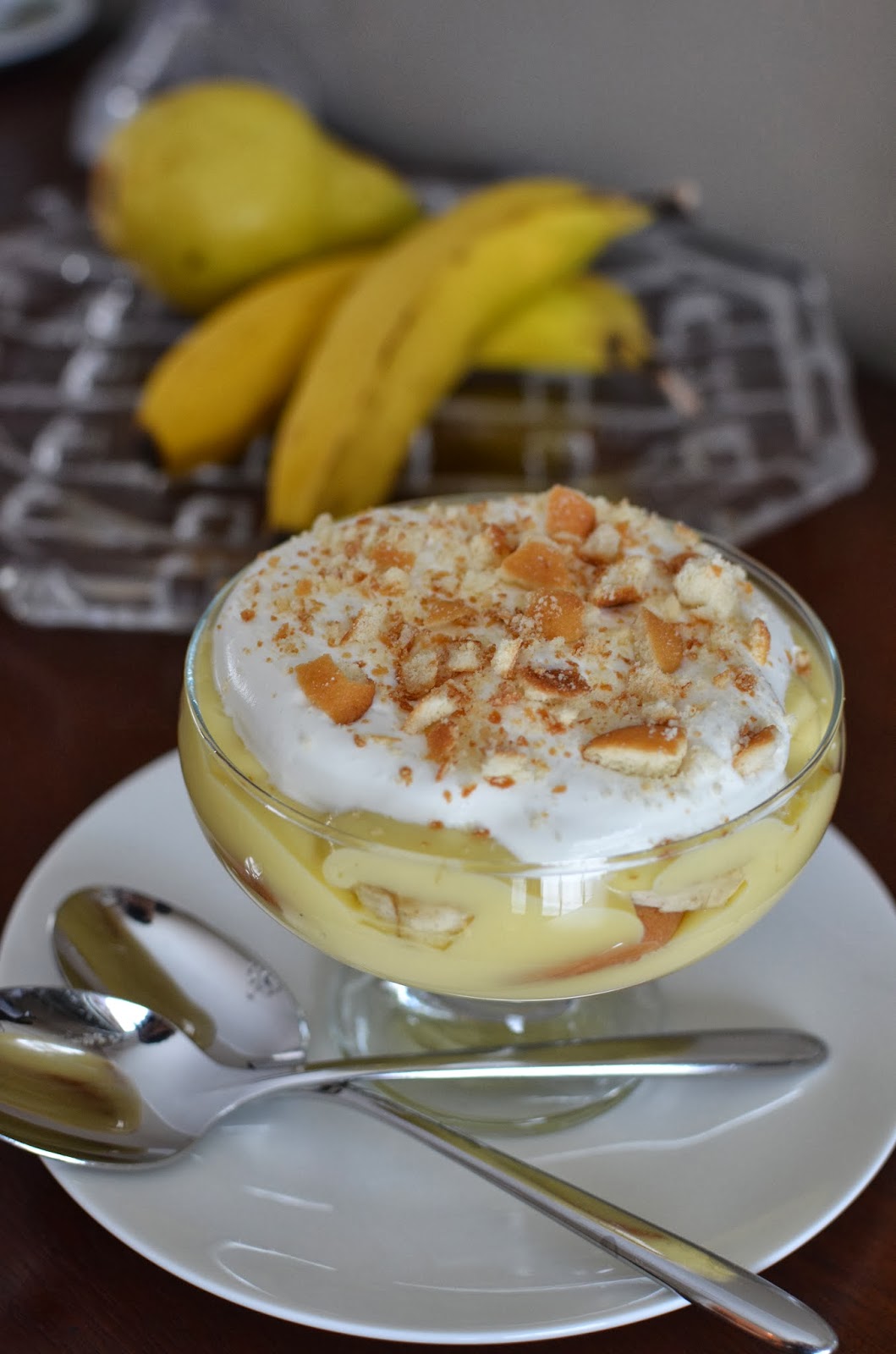 This taste-test came together pretty easily last week.  I'm sure you can relate to this...once in a while, I crave some particular store-bought cookies or crackers, usually something I remember fondly eating as a child.  Not long ago, it was Nilla wafers.  Just a few seems to satisfy my craving for a long time so I had plenty to spare.  With that, my first taste of banana pudding was on hand.

I can't help but think banana pudding is similar to icebox cake.  The pudding softens those vanilla wafer cookies and become this soft cake layer, nestled among the creamy vanilla pudding and sliced bananas that somehow turns the whole thing into banana pudding.  My husband, who is the banana pudding expert by default in our house, really enjoyed my experiment.  It brought him back to his childhood and eating banana puddings made by his friends' parents.  For me, I love tasting something new to me - a classic that's familiar and nostalgic to so many others.  I may still be a lot more likely to reach for the chocolate pudding but now I know what the love of banana pudding is all about!


I picked a simple recipe for my first banana pudding endeavor.  These parfaits were very easy to put together since all it really takes is a few minutes at the stove-top making the pudding. 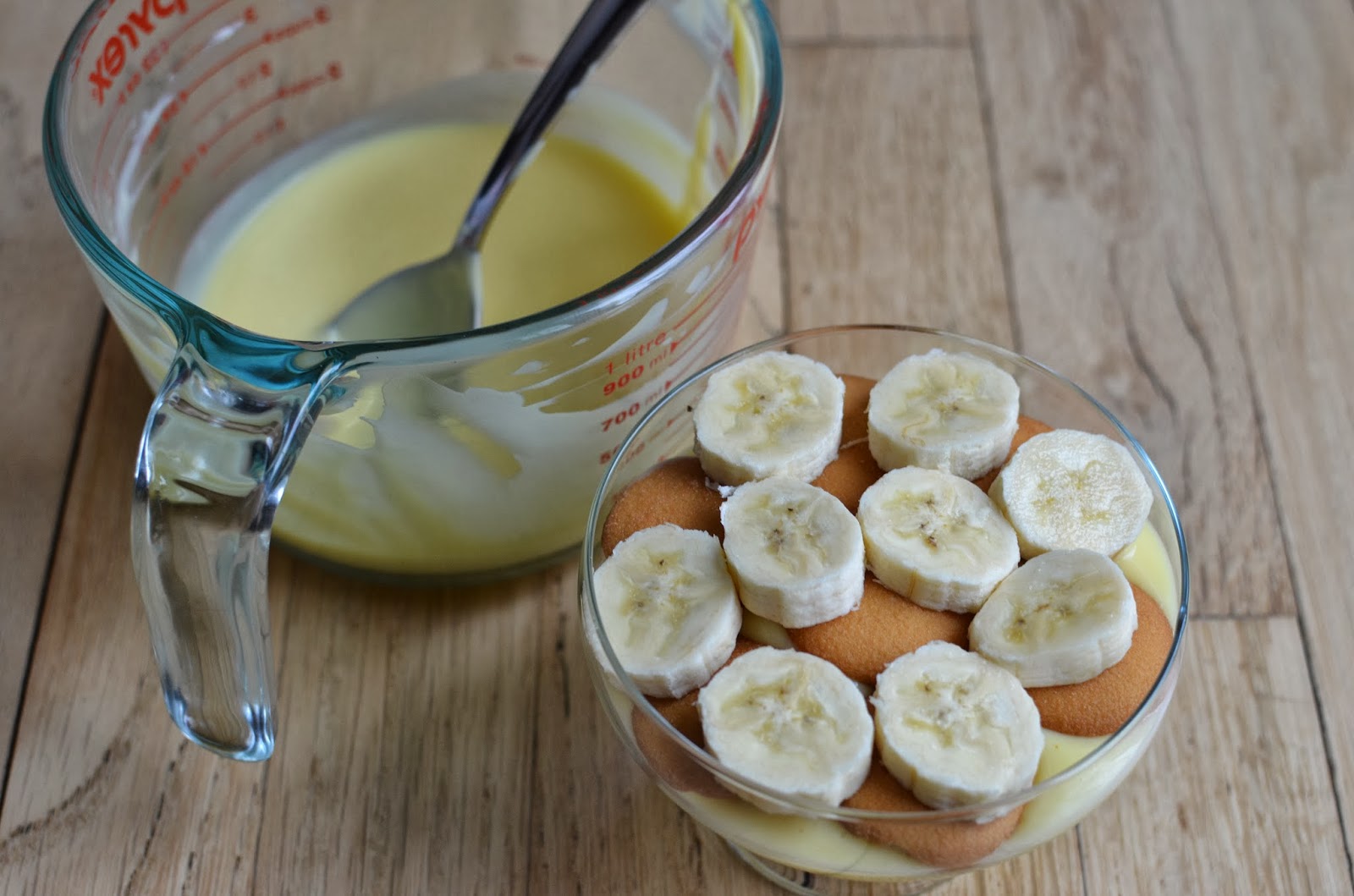 Then the fun is in layering.  A layer of pudding, some Nilla wafers, sliced bananas, more pudding, etc. I made two parfaits and used whole wafers in the wider glass and crushed the cookies coarsely in the smaller parfait.  Either way works since the wafers eventually soften nestled within the pudding. 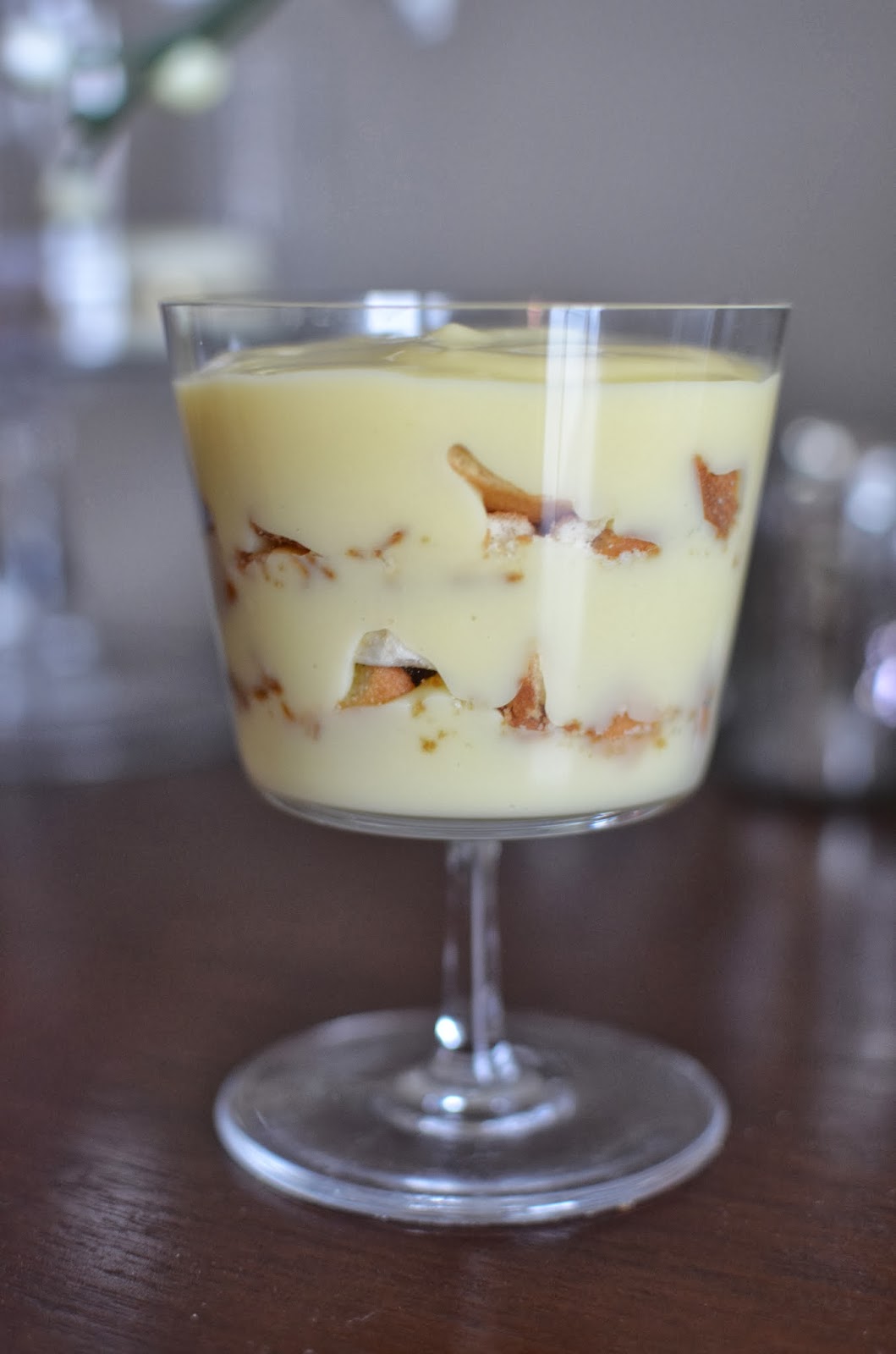 End the last layer of the parfait with pudding and cover the bananas fully to prevent discoloration. Some people top their banana pudding with meringue - a nice way to use up the egg whites you have left over after making the pudding.  I went with some softly whipped cream, sweetened with just a touch of sugar...I thought my husband would like that. 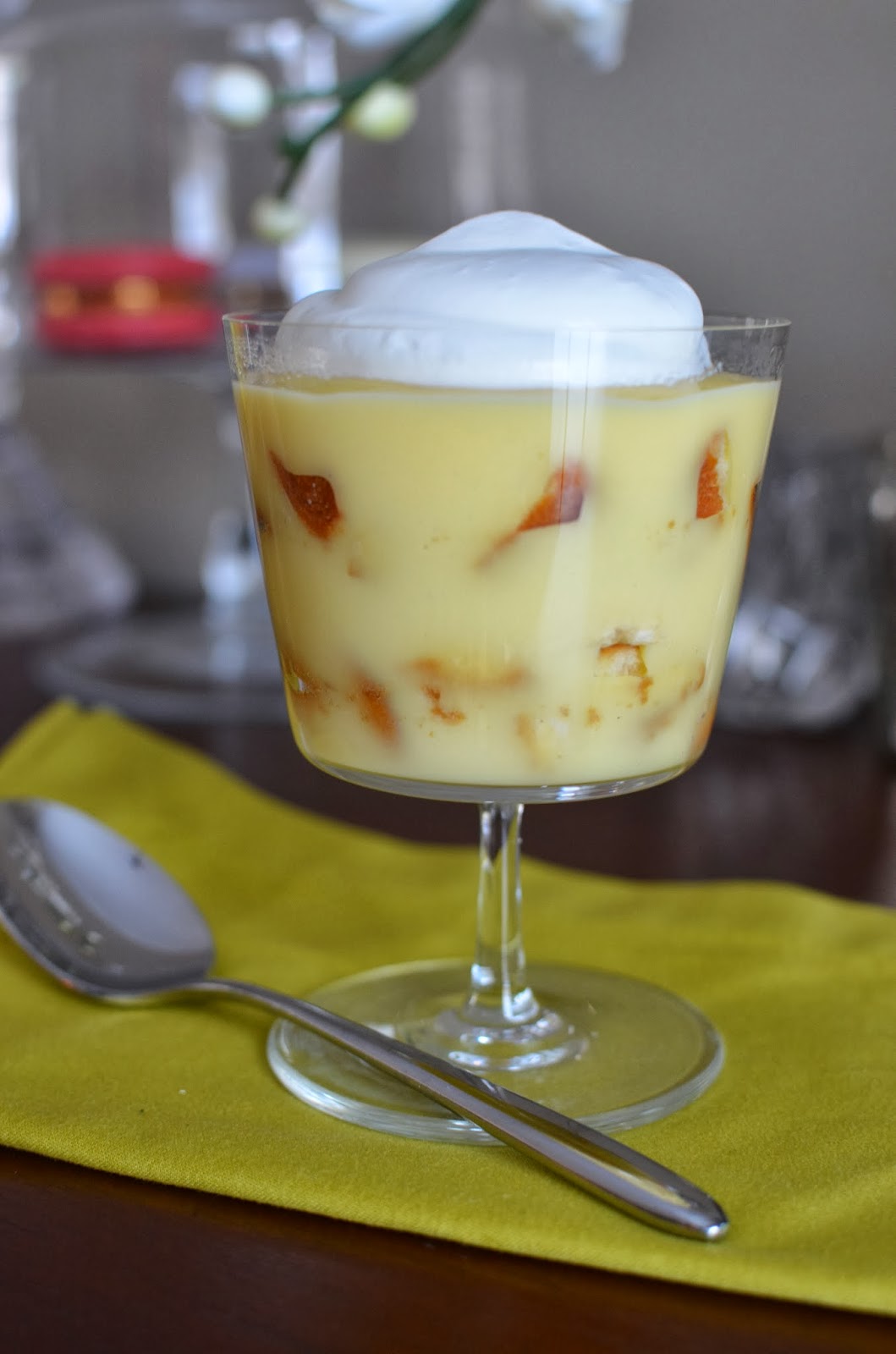 I love a make-ahead dessert like this one that goes in the fridge, getting a little better as it sits.  And I just adore a good parfait, with layers of flavors and textures that meld together; they're not overly fussy and usually pretty to look at. 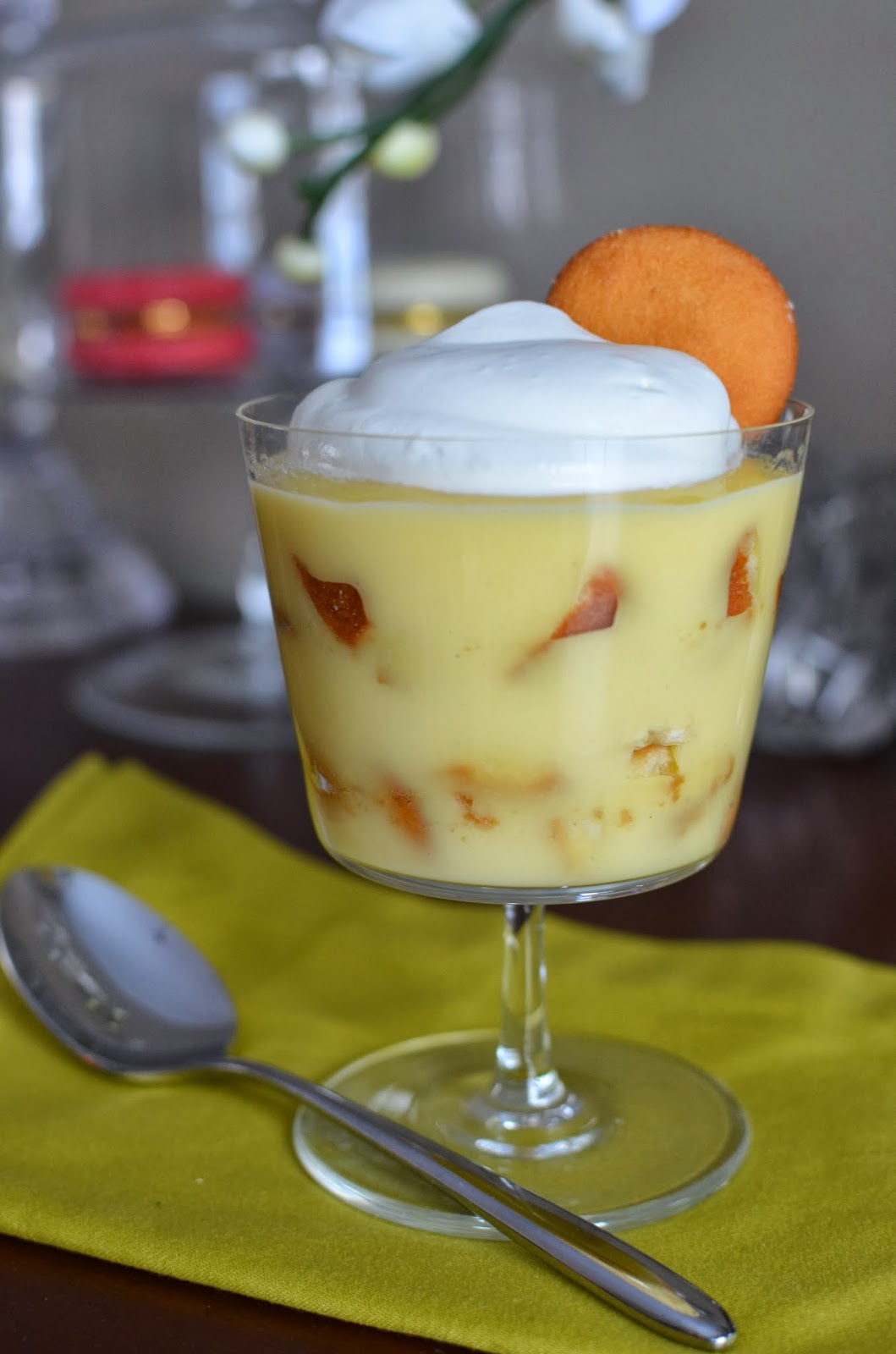 Set a bowl, along with a fine-mesh sieve nearby.  In a small saucepan, off heat, whisk together the sugar, cornstarch, and salt.  Gradually whisk in the milk, a few tablespoons at a time, making sure to dissolve the cornstarch and make a smooth mixture.  Whisk in the egg yolks.

Place saucepan over medium heat and cook, whisking constantly, until the first large bubble forms and the mixture thickens.  This change happens rather suddenly so keep a close eye on it.   Reduce heat to low; whisking constantly, cook for 1 more minute. Remove pan from heat, and pour pudding through sieve into the bowl.  Stir butter and vanilla into the hot pudding.  Let cool slightly.  Slice banana (you don't want to cut the banana too far in advance).

In three 8-ounce glasses (or whatever size container you choose to use), alternately layer warm pudding with cookies then bananas, ending with pudding and covering bananas completely to prevent discoloration.  Cover with plastic wrap and refrigerate until set, at least 1 hour, or up to 2 days.